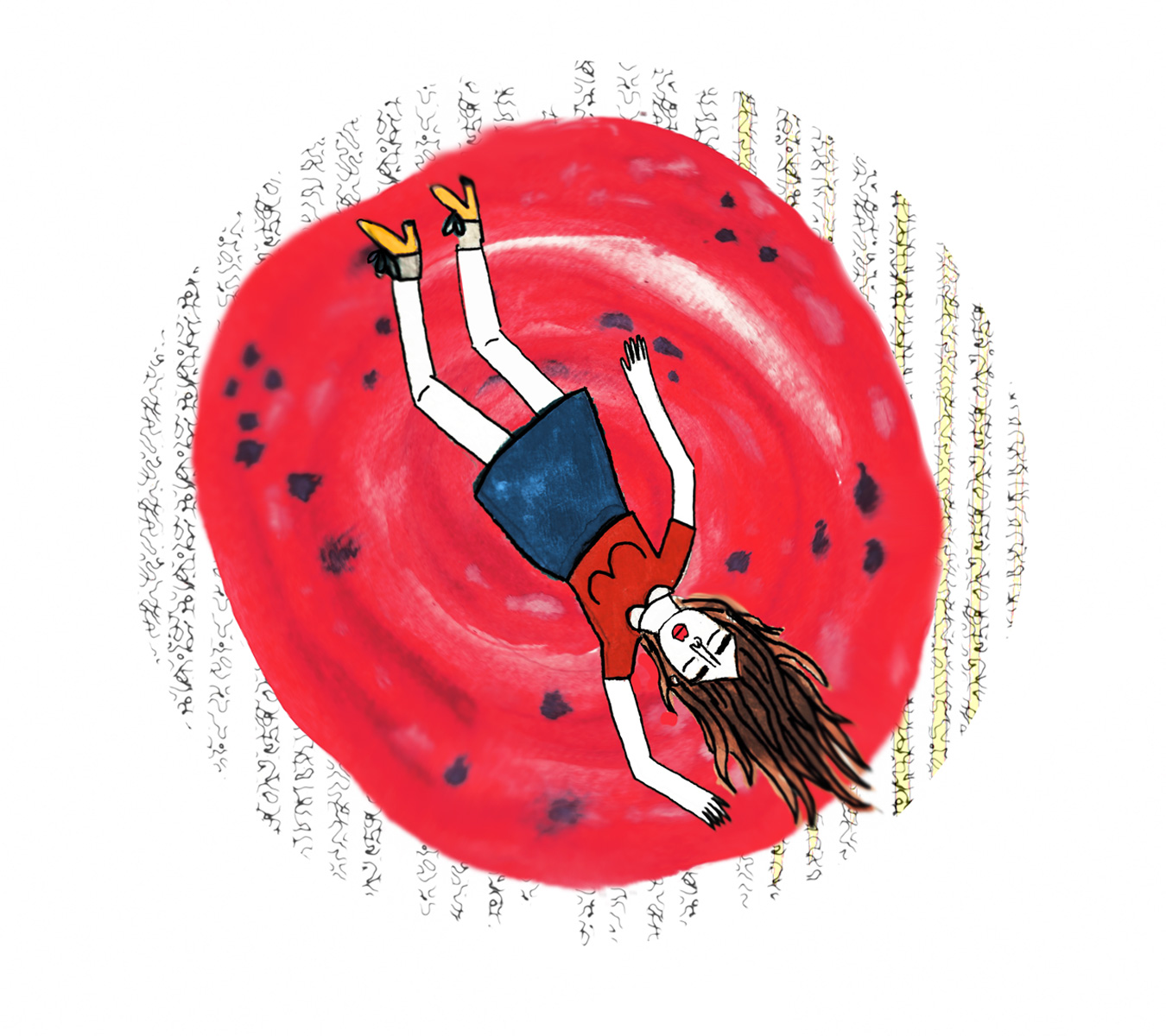 I was sitting in the emergency waiting room at a Vancouver hospital, watching an old woman eat a bran muffin, when three unfamiliar doctors approached me, necks wreathed in stethoscopes, charts in hand. I knew it instantly: bad news.

Beside me, my mother stiffened, and I began to watch the action unfold from a perspective outside my own. I saw the doctors’ sober expressions and shiny shoes; I saw my anemic-looking hospital gown and the tiny hairs on my arms, prickling with unease; I saw my mother’s rosacea, blooming hot as the doctors re-consulted their charts and settled their gazes on me.

I smoothed my gown and finger-combed my hair, as though composure would save me from what I didn’t want to hear.

“Mica Lemiski?” said the lead doctor, whose huge, blindingly-white teeth reminded me of a shark’s.

“That’s me!” I said enthusiastically. In times of stress, I shield myself with optimism. Positivity can feel like armour.

“We have the results of your scan,” he continued, and I tried to distract myself by staring at his teeth, with their predatorial edges and Colgate-commercial whiteness.

“We’ve found some blood clots in your kidneys,” he said.

Even if I’d been expecting bad news, this was not it. I had come to the ER because of severe nausea and a sharp pain in my lower right side—potential appendicitis symptoms—and given my flight to Amsterdamc in 24 hours, I needed the all-clear before boarding a plane and ascending 40,000 feet. Coming to the hospital was merely a precaution.

I tried to metabolize the words—bloodclotsbloodclotsbloodclots—but began to experience semantic satiation instead: sounds became nonsense, mere assemblages of noise. I tried to re-contextualize my pain, understand it as kidney-based, but I didn’t see how a cluster of little red bullets could be blitzing my innards. I was 24 and healthy. In a day’s time, I was supposed to be sailing through clouds, staring out a tiny window at fields of lazy sheep, windmills, and expanses of water-logged land. Illness wasn’t part of that vision.

“So what about my trip?” I asked, near tears. “I’m supposed to fly to Amsterdam tomorrow.”

“Look,” the doctor continued, “we can’t risk you flying. The clots aren’t doing any harm now, but if one of them travels to, say, your lungs…or your heart…well…”

The “well” was laden with subtext.

In Elisabeth Kübler-Ross’s On Death and Dying, the author discusses the five stages of grief, the first being denial: “denial following the presentation of a diagnosis is more typical of the patient who is informed prematurely or abruptly by someone who does not know the patient well or who does it quickly, to get it over with, without taking the patient’s readiness into consideration.”

From a psychological perspective, I was set up near-perfectly to deny my circumstances, yet I don’t think I was rejecting the diagnosis itself. Rather, I was failing to absorb its reality: it could potentially cause death on an airplane. That was too far-fetched, so I chose a more tangible truth to cling to: my trip was cancelled. I would not ride a bike on a canal. I would not go to a Dutch rave. These were losses I could perceive, feel, cry about. I mourned them instantly.

My mother asked all sorts of patient, rational questions as I continued to float around in my emotional soup. Then the doctors sent me for more bloodwork, more urine samples, and some kind of wiry chest test that I endured while cracking jokes about the doctor’s blindingly-white teeth. “They’re just too white!” I exclaimed to the nurse, near-hysterical. “Are they even real?”

Maybe nothing seemed real at the time.

The next month felt very dull. My school semester had finished and I had no job, so medical tests became my life’s scaffolding. The doctors still hadn’t discovered the source of the clots or how to manage them, and as such they instructed me to live as normally as possible (barring travel) until they could recommend a course of action.

This left me in a frustrating state of limbo. My illness was apparently “life-threatening,” but since my symptoms had disappeared (no more pains, no more nausea), I was neither Healthy Person nor Sick Person. Caught between two identities, I was treading water while blindfolded. I bobbed around, legs peddling furiously but making no progress.

I let my mind grow weedy with confusion, frustration, sadness. I would lie in bed and picture the clots as raisins, floating around inside of me, and wonder what would happen if one of them shot up into my lungs or brain: would I have a pulmonary embolism or a stroke? I decided I preferred the embolism, because the brain is harder to fix.

Eventually my sadness blistered with apathy. I contemplated possible illnesses as if leafing through an Ikea catalogue. Early onset atherosclerosis? Meh. Unusually narrow renal arteries? Whatever.

In hindsight, I think my depression during this time was a way of compensating for the physical symptoms I no longer felt. Maybe my subconscious needed a way to make the illness feel more true. I considered starving myself, living in my pajamas, laying on the couch all day—things that would cement my identity as Sick Person, because Healthy Person seemed too far gone.

About a month and a half after my initial diagnosis, I had an appointment with a new nephrologist. From behind an oversized mahogany desk, in a room that looked more like an aristocrat’s bureau than a medical office, he examined my bloodwork and peered at me suspiciously.

“If your kidneys are full of clots,” he said, glasses straddling his nose, “why aren’t you…sicker?”

I was confused and devastated by what felt like an accusation of fabricated illness. Did this man think I was complicit in some fantastic medical scheme?

“I don’t think there is anything wrong with you,” he said with a shrug.

He turned out to be right. After sending me for a re-scan of my kidneys, the nephrologist affirmed my good health.

I wanted him to notice the bags under my eyes, my pallid complexion, my sunken posture. Didn’t any of it count?

Walking out of his office on that overcast spring day, I felt ripped off, then deeply shameful. Why did my good health feel like bad news?

From 2011 to 2013, researchers at the University of Copenhagen conducted a study in which they examined the emotions of women who had been misdiagnosed with breast cancer. They surveyed 454 women, 272 of whom had false diagnoses, and concluded that “having a false positive is not harmless and causes undesirable outcomes in the long run” such as loss of sleep, increased anxiety, a sense of dejection, and feeling unattractive.

This conclusion seems painfully obvious to me. Of course the women would continue to suffer emotionally. They had been put on a mental Tilt-A-Whirl and were bound to feel dizzy, even after the ride was over.

I, too, felt dizzy once my diagnosis was reversed. When people said I must feel relieved, I just felt bitter. Yes, I was thankful that I was “okay,” and of course I did not wish myself ill, but my sadness had acquired its own inertia. It wouldn’t just stop. In imagining the messy medical procedures and catastrophes potentiated by my illness, my mind had acquired a storage locker’s-worth of clutter. But you can’t just throw your emotions in the dump.

Then there was guilt. I felt as though I’d deceived the people who cared about me. With my illness deemed fictitious, Sick Person was only a character I’d been playing. If I hadn’t brought myself to the emergency room in the first place, the pain would have subsided on its own (it was likely a product of a rupturing ovarian cyst) and I would have spared everyone the freight of anxiety and misplaced sympathy.

I wonder if, on some level, the mind and body want to be in-sync. If the body is sick—or, in the case of my supposed kidney clots, the body is perceived as sick—will the mind do its best to match this state, to throw itself into turmoil as an act of misguided compassion? My scan revealed the absence of clots within my physical self, but maybe they had twisted themselves into the lattice of my psychology—a place where electromagnetic waves could not see them. Maybe I struggled so much when my body was deemed healthy because mind had yet to catch up.

It’s been almost a year since the original diagnosis. Still, sometimes I wake up in the middle of the night to a twinge in my side or lower back. This is it, I think to myself. The clots are travelling. Where will they lodge themselves? What will the damage be?

And then I remember: they don’t exist.

This essay from our archives was originally published on April 28, 2017. Read more essays.