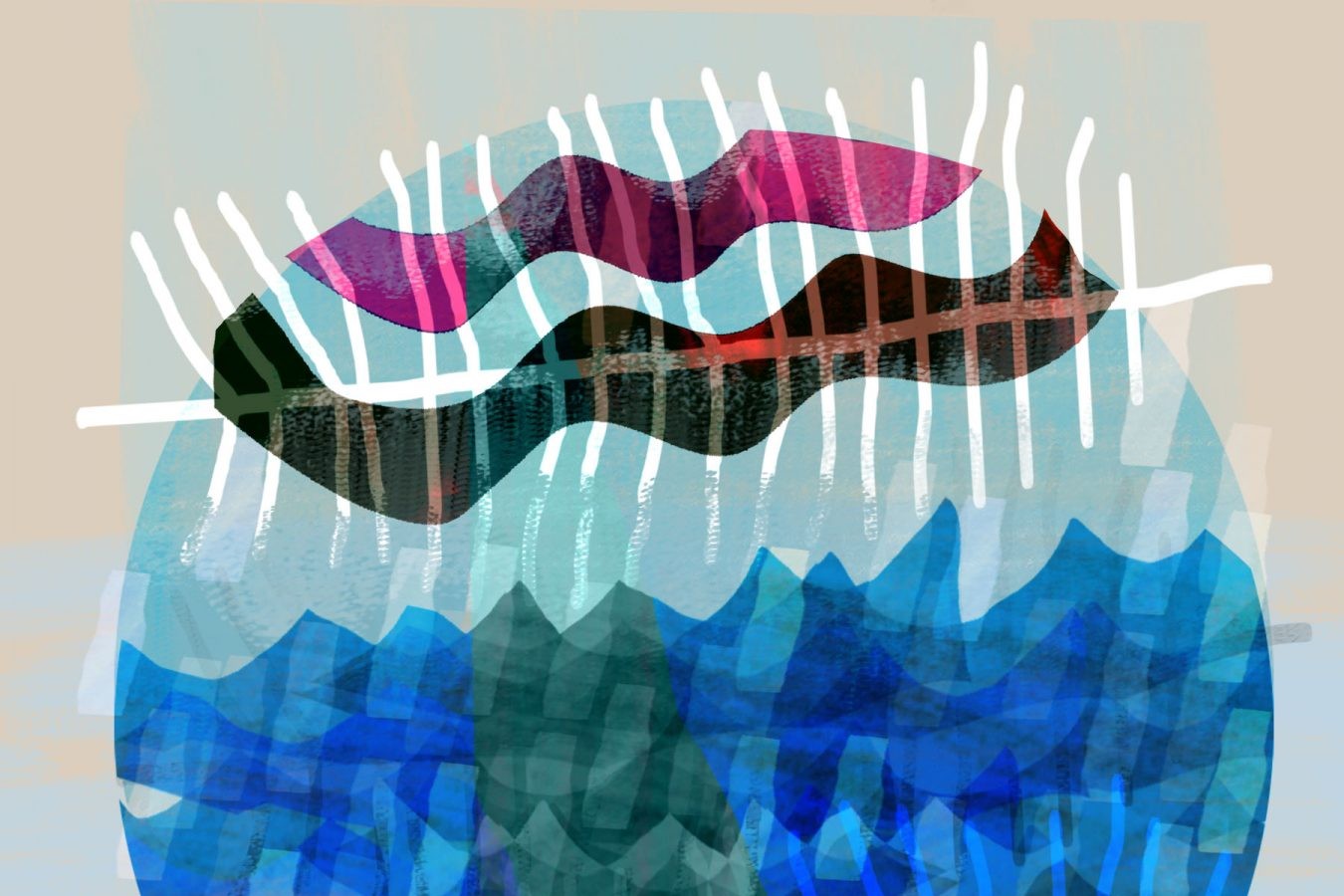 “Don’t watch this part,” Dad says from the boat, a trout in his hand.

I can’t pinpoint the first time I saw one living thing kill another, but chances are this was it: me, five years old, sitting in an aluminum boat with a bag of beef jerky in my lap as Dad rained blows on the daily catch. It was always such a surreal experience to see him kill something; he was a veterinarian, so I was used to seeing him save animals, not slaughter them. Maybe that’s why he told me to close my eyes during the scary parts.

It’s something my parents did often when I was little: steered my gaze away from things they thought were ugly. How many pieces of roadkill was I spared seeing because my mother guided my eyes towards a mediocre sunset, or a cloud shaped like a wolf?

I do not resent these protective measures. After all, the sight of death always made me wild.

I’d often weep for dead dragonflies on truck fronts before plucking their tiny bodies from the grills. Cup-handed, I would bring their corpses home and place them in jewellery boxes because, cushioned in velvet, they could become special again. Most extremely, I once purloined a dead duckling from the beach and re-nested it in a shoe box in my bedroom. After several days, the osmotic stench of death leaked through my vanity drawer, out of my bedroom, and into the hallway, where it alerted the household to my freakish enterprise. I was told my secret pet must be given a proper burial—outside.

In hindsight, it seems obvious that my efforts to preserve dead animals had something to do with a fear of death. I probably felt that by entombing a dead duck or dragonfly, I was saving these animals from the abyss of “non-being,” which had always looked to me like a big black well in which you dissolve and then just…aren’t. I couldn’t imagine the Aren’t. If I could give something a sort of second life, I could save it from the Aren’t. 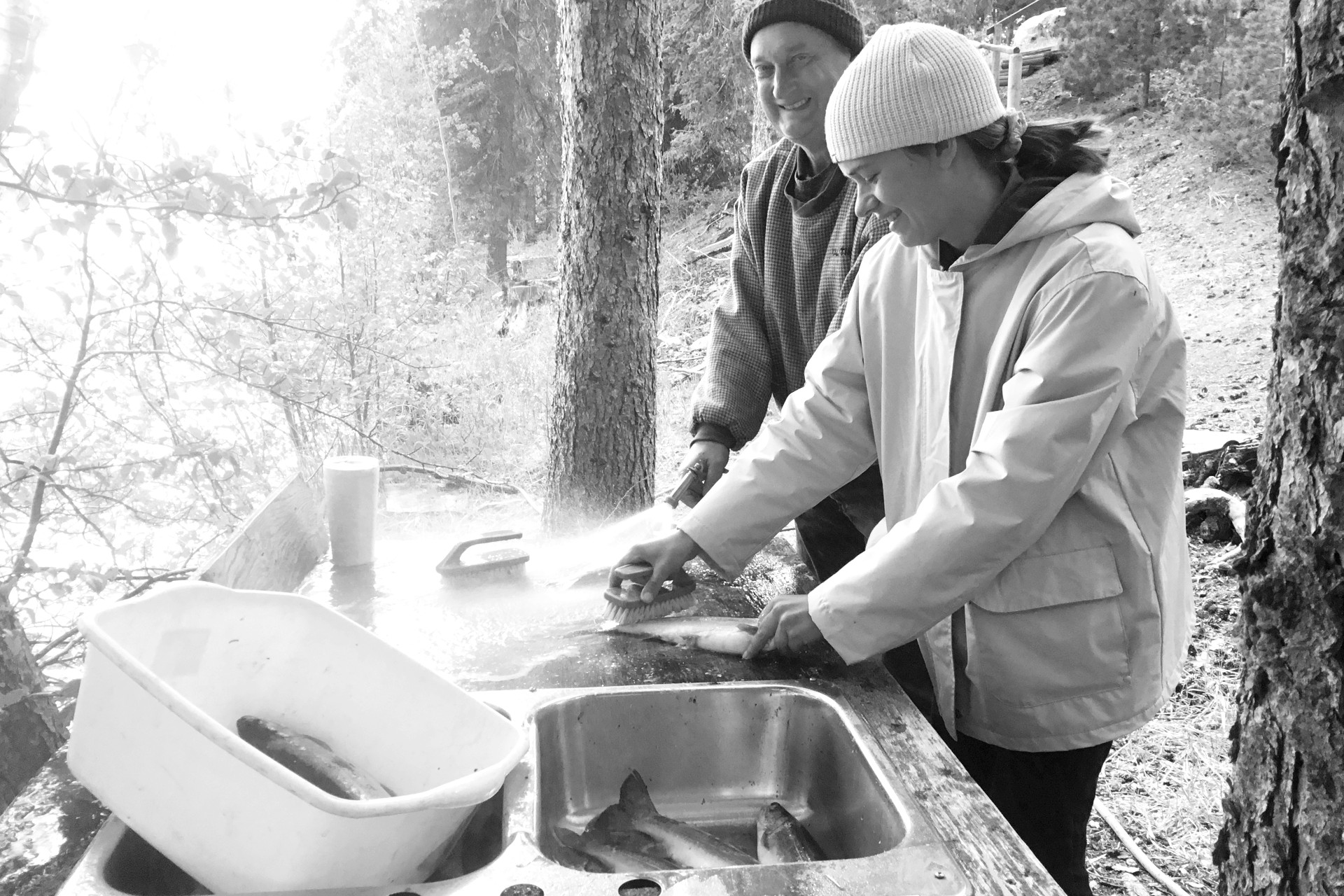 I was maybe 10 when I first started gutting fish on my own. Up until that point, Dad always helped me with certain parts of the process: the initial knife cut, the tearing of gullet and gills from the body.

“Male or female?” he’d ask, and I’d poke around the gas bladder, looking for the orange twinkle of eggs, the milk-shine of testes.

“Where is the heart?” he’d say, and I’d lift up its jelly-liver, pinching my fingers to find a rubbery heart no bigger than a chickpea and slick as mud.

“What has this fish been eating?” he’d wonder aloud, and I’d peel apart the webbed mass of intestines, find the stomach, and slice it open, careful as a fine-diner piercing a quail’s egg. I’d squeeze out shards of mayfly and grainy remains of scud.

Unlike ironing a skunk to the pavement, gutting a fish never looked like death to me—in the wake of violence appeared what looked like life, bright and wet. The fish’s heart had stopped beating, but I could hold that heart between two fingers. Its gills had stopped fanning, but they reminded me of butterflies.

I’m on the dock with a pail of guts. Arms flecked with scales, I shimmer in the sun and watch as a flock of seagulls circles closer, hungry. I slide my hand into the bucket and bring up a fistful of organs. The gulls squawk, become manic. Give me a liver! they seem to cry.

I throw the pieces of fish into the air, high as I can, and watch the birds attempt to dive-catch their dinner. I feel like I’m glimpsing something forbidden—or if not forbidden, then at least transcendent—because watching the guts soar skyward feels like witnessing something ascend to the next phase of its existence. These viscera are on a journey: travelling from the lake, to my father’s hands, to my hands, to a gull’s gullet, to—I imagine—tiny beaks yawning atop a cliff somewhere. This is the life cycle, but it’s also a kind of afterlife.

And so begins my obsession, or maybe infatuation, with the pearl of an air sack, the prickle of a pin bone. Because not only are these parts aesthetically pretty, but they seem to hold some fundamental truth about the After, which eases my anxiety about the Aren’t. When I run my thumbs along the spinal column of a rainbow trout, I sometimes feel as though every question I’ve ever had is both unimportant and being answered fully. Is that poetic, or just insane? That, with a heart in my palm, I shudder with meaning? 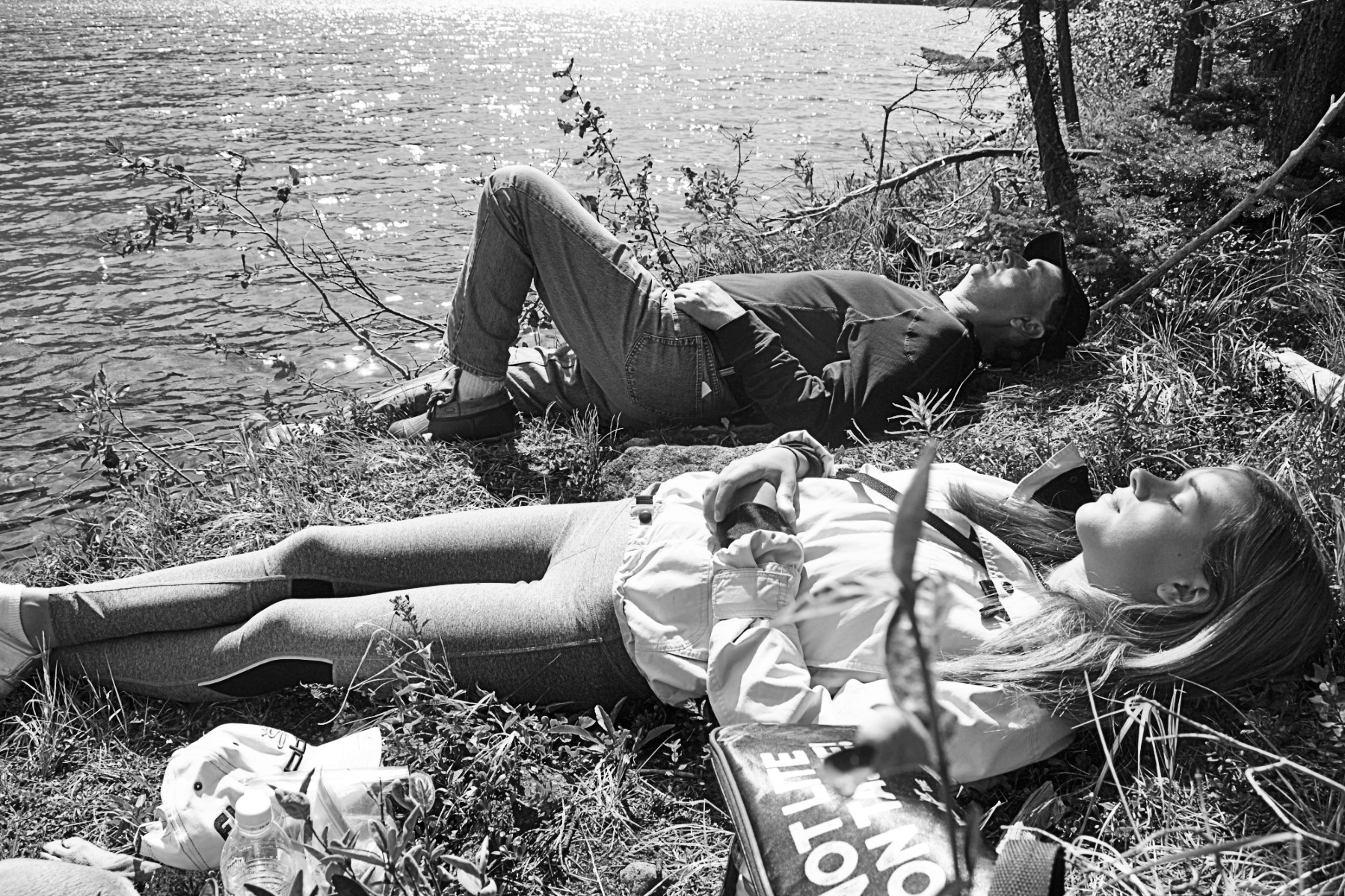 In Symposium, Plato says the highest form of love occurs when a person observes a beautiful vision that represents an “eternal oneness” and an “inviolable whole.” For me, that beautiful vision is what I see when I cut open a fish and am faced with a trove of organ-jewels, torn from their body beneath a halo of mosquitoes in the orange smoke-light of July. It is what happens when I feed the birds, who are providing for their young just as my father is providing for me and, more importantly, helping me provide for myself. And during these moments I feel like I am cannon-balling into my best friend’s pool, and entering a washroom so beautiful it makes me forget I was ever sad, and reading a book that makes me feel seen, and waiting for the train to squish the pennies I laid on its tracks, and kissing in the dark corner of a bar, and breathing heavily on the edge of a river, and looking into the eyes of my childhood dog, and hearing nothing but the whine of trees on the brink of collapse.

I don’t think fish guts, in and of themselves, are representative of Plato’s “beautiful vision.” But maybe, for me, they put in motion that vision, activating a feeling that I, my experiences, and everything else around me are being woven into the world’s bright tapestry all at once. Fish guts are a visible and tangible representation of interconnection: the heart connects to the gills connects to the brain. Staring into a fish body makes me think, it is all there. Throwing the bloody pieces to the sky makes me think, it never ends.

As a child, every task associated with fishing felt distinctly adult to me, but not in the same way that carrying briefcases or wearing skirt suits or hailing taxis felt adult. Fishing allowed me access to a more rugged realm of adulthood, a world I felt I couldn’t—and might never—participate in otherwise. I had a fairly cushy childhood: along with being shielded from roadkill and Power Rangers movies (“too violent”), I was brought up comfortably middle-class, white, and existed within a body, and behind a face, that people told me was “pretty.” I had a lot of privilege, which I am not ashamed of, nor do I regret, but I was often wary of being labelled “most likely to win a pageant and use the prize money to build an orphanage”—not because there’s anything wrong with that narrative, but because it didn’t feel true to me. I had a bedroom full of dead bugs and animal bones. I threw bloody guts to birds.

I loved that I could transcend the pretty-girl narrative by sticking my knife in a fish and slicing upwards. Not that I could articulate it at the time, but I loved how these moments allowed me to demonstrate my true allegiance to the land, and its circles of life, as opposed to the culture, and its circles of oppression. It was through this opposition to the norm that I felt my adulthood—and more than that, my womanhood—begin to crystallize.

When I was 17, I developed a number of destructive eating habits, and soon I was 100 pounds and living inside what looked like the body of a 12-year-old.

My weight loss had everything to do with wanting to feel the type of control, and a sense of quiet rebellion, I got from fishing and gutting. Sometimes I wonder if being a fish-gutter-girl in private settings made it important for me to show the world, in a more public way, that I wasn’t its sweetheart. But it’s tough to say. Women shrink themselves for so many reasons. And also for no reason at all.

The irony of all of it was that, in resisting whatever stereotype I thought applied to me, I became another stereotype altogether: overachiever with an eating disorder. Also ironic was the fact that, if I thought this “rebellion” would make me feel stronger and more adult, like fishing always did, it did exactly the opposite in a physical sense. I was weak, tired, apathetic. I felt like I was un-becoming a woman—which I know is not right to say, since womanhood is not strictly a biological construct—but when my breasts shrank and my period stopped and boys didn’t look at me anymore, I began to feel completely detached not only from my developing womanhood, but from any real phase of personhood altogether. I wasn’t experiencing adolescence in the same way as my peers, so was I really a teenager? And if I wasn’t really a teenager, navigating that rickety bridge between girl and woman, then what was I? Where was I? I was nowhere. I was in a void I didn’t see coming.

I have always used fish to conceptualize weight. At six years old, estimating a fish’s weight was something I became good at out of necessity because before netting a trout, you must decide if it’s heavy enough to keep. A one-pound fish is too small but a two-pounder is perfect for smoking. A four-pounder is something you can brag about to your cousins and a six-pounder is a myth you hear about at the general store.

And so sometimes, confronted with my naked body in a mirror, I would visualize my weight loss as a time-lapse where, one by one, trout peeled themselves from my body and flopped to the floor, twitching silver. For every pound I lost, I would think, wow, I have shed one whole trout. And sometimes it made me feel bad, to think of these trout as discarded pieces of myself. Because if they were no longer part of my body, what and where were they? I had sentenced them to non-existence, just as I had sentenced myself.

I would like my organs to be harvested. I say harvested, not donated, because in this digital age, the concept of harvesting feels pleasantly rural to me. To “harvest” is to seek refuge from modern city life (if we set aside connotations of dystopian governments “harvesting” livers to serve their own dark purposes, of course). What I really mean is that I would love for my body parts to be made meaningful after I am finished with them. I would love for two people to meet in a grocery store one day and suddenly feel pulled together, one at the chest, the other at the hip, by a force they don’t know the origin of, and that can only be described as self-recognition. Ah, their bodies will sing, I found you.

I’m 24 and kneeling in the sand. With a fish in my hands I am crouched over the section of beach where stream meets lake, and I am rinsing blood and scales in the crosscurrent. Dad is a few paces away from me, doing the same. We are both quiet.

Dad loves it here and so do I, this place where we light paraffin lamps, use wood for heat, eat when we’re hungry, see our reflections in water instead of glass. We have fish, our hands, each other, a circle. 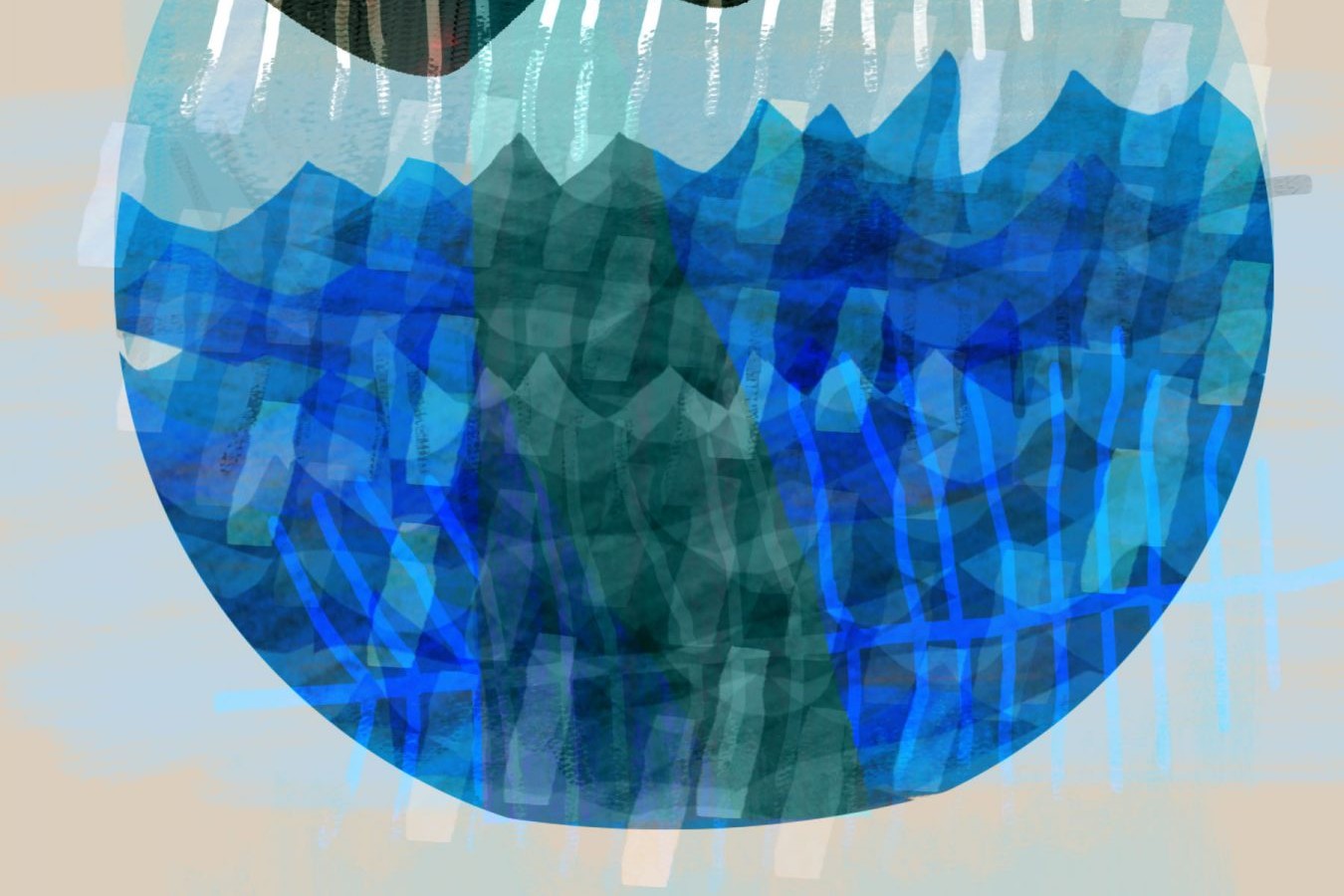 This story from our archives was originally published on March 28, 2018. Read more Essays here.