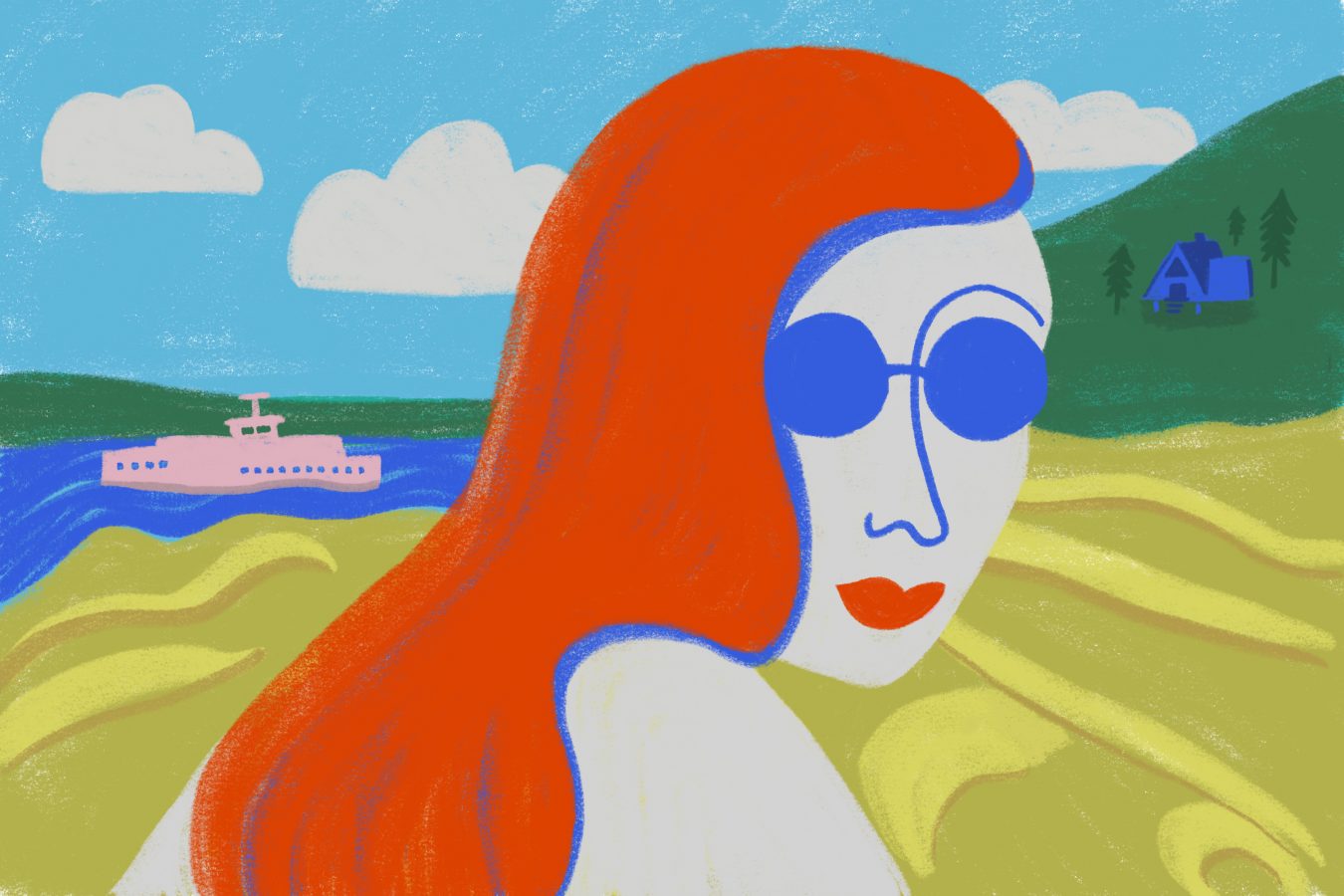 When I was growing up, Gabriola Island was not a place I wanted to be. As a young teenager, spending weeks at a time with my family, sequestered on the remote Gulf Island where we had a cabin, felt more like punishment than treat. Gabriola didn’t fit my narrow notions of what a vacation should be; it was the early 2000s, an era that idolized California surfer girls, and the island offered no white sand or palm trees. While my classmates were spending school break at Disneyland, my solitary summers made me feel just as different as my frizzy hair and glasses did.

I wasn’t, in my adolescence, able to recognize Gabriola’s wild strangeness as beauty. The island’s crater-like sandstone beaches are lined by dramatic arbutus trees that undulate upwards, shedding papery red bark at the slightest touch. The beaches’ otherworldly rock formations, known as tafoni, are created by rain and tide against soft sandstone, appearing as mushroomy shapes and honeycomb networks of tiny holes; the resulting coastline looks very much like the surface of the moon. There are black-and-white photographs of my sisters and I on these beaches, in matching long white nightgowns, that look shockingly romantic to me now.

In front of our sky-blue cabin was a steep hill, almost like a small cliff, down to the solid stone beach. Driftwood collected there, and nearby was a fort, usually littered with beer cans, where I would hide from the sun and read. Days were occupied with afternoons at my grandmother’s honey bee- and mosquito-filled garden, and interminable walks to the store for Pop Rocks that melted in our hands and echoed in our skulls on the way home. Cursed with both juvenile self-consciousness and the utter lack of body awareness that comes with childhood, I tended to wear baggy hooded sweatshirts even in the hot sun.

The island’s community members are just as unique as the place they call home. One year, the local paper published a rambling, 1,000-word letter from a woman who claimed she was being “psychically harassed” by other residents. The island’s website boasts that it enjoys the sixth-highest proportion of artists per capita in Canada (it is actually billed as the Isle of the Arts), and littering the dirt roads are hand-painted signs for studios turned makeshift galleries, with names like Moonshine and Whalebone.

None of this mattered to me when I was young. But when I started to return to Gabriola as an adult, I saw its remarkable allure through my friends’ eyes. The lunar beaches and red trees were intoxicating; our next-door neighbour was a brilliant recluse rumoured to be a colleague of Stephen Hawking’s.

Seeing orcas through my kitchen window and hoarding stones painted to look like seals are now treasured memories, telling not only my story, but my family’s, too.

While staying true to itself, the island has grown up, too. You can now find iced lattes and wood-fired pizza in Folklife Village, Gabriola’s tiny downtown shopping centre, and Wishbone on North Road is like an island-sized Whole Foods with plenty of local products. Also in Folklife Village, Hive Emporium is a two-storey, light-filled hub for local arts and crafts that regularly hosts opening receptions, poetry readings, and workshops. As the cultural centre of the island, Hive also features a cappuccino bar, a bookstore, and a commercial gallery in the upper loft level, plus local creations from beachwear to blown glass on the floor below. Some of the island’s more popular artistic souvenirs are Tammy Hudgeon’s vibrant glass sculptures and Sheila Norgate’s paintings, the latter of which combine text, natural imagery, and cultural iconography such as Freud’s face; one of Norgate’s works still hangs in my father’s home. A culinary specialty is the Gabriola Bar: dark chocolate with a creamy roasted garlic filling. When I was a child it made me gag, but I can appreciate it (in small doses) now.

In terms of natural attractions, the most iconic of the island’s coastal phenomena are the Malaspina Galleries. Here, the crashing of powerful water on sandstone has left a smooth, upward-curving overhang, quite literally a white-crested breaker frozen in rock. The classic dare is to jump off of them into the water, though I’ve never been brave enough to try it myself. Petrogylphs, Indigenous rock carvings up to 3,000 years old, may be the island’s best-marketed sight. While they sound fascinating, most of the parts visible to the public are replicas that can be underwhelming in person.

One of my family’s favourite walks takes us meandering down the beaches along Berry Point Road to the orchards at Orlebar Point, where you can leave coins in exchange for baskets of fresh apples or plums at rickety self-service fruit stands. At high tide, Clark Bay is a wonderful spot to kayak or swim; years ago, my sisters and I would spend the day there, awkwardly sharing the ancient wooden raft with children from Camp Miriam (where Seth Rogen famously went as a child) across the street. For a more traditional sandy shore, Drumbeg Provincial Park is the perfect place.

It’s only now, looking back on it all, that I realize how lucky I was to spend so much time on Gabriola, how idyllic those years truly were. Seeing orcas through my kitchen window and hoarding stones painted to look like seals are now treasured memories, telling not only my story, but my family’s, too. Though I didn’t always appreciate them at the time, the hours I spent exploring Gabriola’s alien beaches, climbing its brightly coloured Arbutus menziesii, and soaking up its eccentric, creative energy helped make me who I am. The most valuable lesson I learned growing up is that often, the things that make you different are what will define your life for the better. I’ve come to make peace with my own uniqueness, and Gabriola helped me do it.