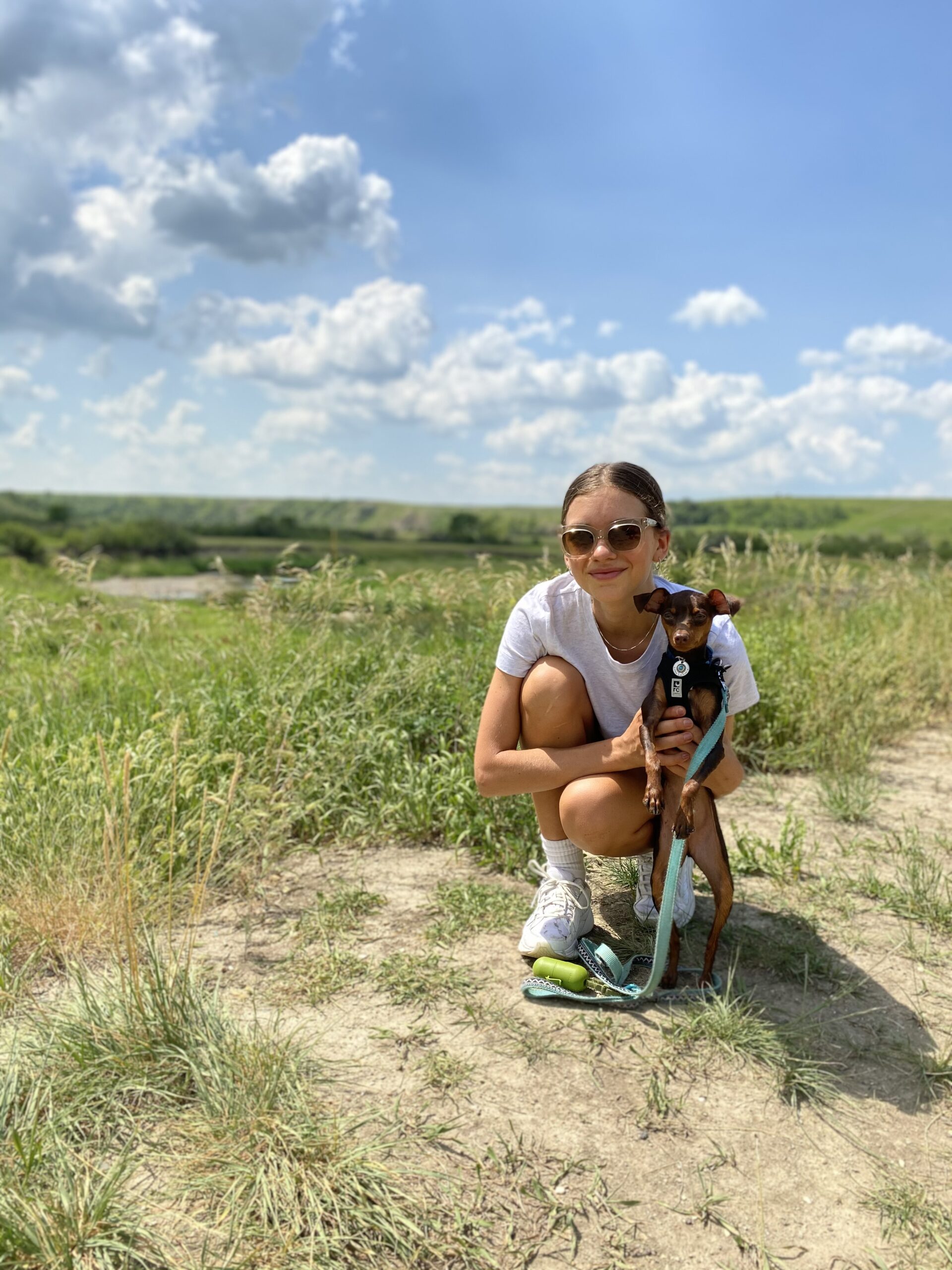 People will probably judge me when I tell them my dog was an impulse buy.

I’m sorry, but that’s what happened. It was the pandemic’s fault. And also Instagram’s fault.

Lying in bed one night, languishing in my sweat clothes, essentially comatose, I found Italian greyhound nirvana. On my phone, I watched puppies dance on a sunny beach. The contrast between their existence and mine was jarring. I wanted a piece of their joy. It seemed absurd that I didn’t have a dog. It was actually stupid, my doglessness. I couldn’t go on this way.

I told my partner we basically had no choice. “We’ve always been thinking about it. Let’s actually do it! We have to. We can’t not! Let’s go for it.”

One week later there was a puppy—a tiny miniature pinscher—sleeping in a crate in our living room. We named him Larry David (L.D.) and equipped ourselves to care for him by reading wikiHows and watching videos on the internet. I almost can’t describe how exhilarating it was to have this new project, this entity outside myself that needed care, attention, love, discipline. L.D. was lifting me from the pit of introspection I had been rolling around in since the virus took over the world. I may still have been locked down inside my apartment but at least I could now escape my own mind. What a relief, to leave myself alone.

At some point during that first week it sank in that, if all went well, I would have L.D. until my mid-forties. I had known this abstractly before we’d got him, but the reality only hit when I stared into his beady brown eyes, which now appeared like little portals to my future. What would 2036 be like? Would I have the job I wanted? Would my parents be alive? Would my partner still be here? Would Holland be underwater? Would the Big One have happened? Would I still care this much about my looks?

Like many women I have a fraught relationship with aging. But I am that insufferable person who is self-conscious about looking too young. I’ll be “thankful for it one day,” but for now it can be alienating. Servers in bars will approach my table of friends to ask me—and only me, going on 30—if I am old enough to be there. I know we all covet the glow of youth, but when I am singled out overtly I feel exceptional in the wrong way. When I am mistaken for a high-school student or called “sweetie” by a 22-year-old, I don’t feel glory but instead like a child banging on the door of a fortress. Hello? Can I please be let into adulthood now?

A boyfriend once told me that I had a tendency to act young. He said I sometimes behaved like a little girl. He said, “I just want you to be a woman.”

This comment hit me like a dart to the neck: it was so swift and perfectly aimed that I couldn’t process it at first. Once I registered the wound, my numbness became anger. “Be a woman? Seriously? Be a woman?”

Of course, comments like this only pierce because they’re not poison but truth. He was right: I did act young sometimes. I used the ingenue schtick when it suited me. I asked questions I knew the answers to. I pitched my voice higher around men. I was more comfortable being shown and taught than leading or acting like an equal in my relationship. The world had set out a box for me labelled “cutie pie,” and I’d hopped right in.

There were things I couldn’t articulate to my boyfriend at the time—like maybe I’d internalized the age group people saw me as, or perhaps I’d subscribed to the wide-eyed femininity I saw everywhere from princess movies to car commercials.

“You don’t know what it’s like to have your adulthood constantly questioned by people,” I said. “It gets to you. And now you have confirmed an awful fear of mine, which is that even the people I love see me as a child.”

I began to self-censor my behavior. I became ashamed of my brightly coloured wardrobe and comfort-seeking behaviours, such as watching Disney movies or bringing my stuffed dog on vacation. I feared they were indications of stunted growth. I’d heard “be a woman” and assumed it meant scrubbing off all traces of my younger self.

The rules of aging can be arbitrary and a bit stupid. While I agree a baby shouldn’t have to generate income, who decided older women can’t wear tube tops? Why is age 6 the cut-off for picking your nose in public? Growing older is a process of self-annihilation, in that acting “your age” means disguising you were once (or will be) anything else. We may want to preserve our young bodies, but we’re often intent on killing our young selves. After all, look at what they said, did and wore. They’re an embarrassment.

We’re equally hard on our future selves. They give us space to project our dreams and fears, and in return we do everything we can to deny their physical reality. We look for anti-aging miracles and regard our inevitable decay as we do a natural disaster: impending but abstract, shoved to the realm of “one day.”

Is there a way to make peace with our other selves? Can I exist as a past, present, and future version of myself at once? The answer is so horrible I already experience future shame over saying it: I’m going to reconnect with my inner child. And while I’d rather burn my apartment down than hang this sentence on my wall in fake handwriting, I think there’s something sweet about not leaving the person you once were to die. Maybe while I’m at it, I’ll bring my inner adult (perhaps my inner geriatric and inner corpse too) into existence. I want to feel them jostling around inside me, fighting for the spotlight like members of a chaotic family band.

When I first brought L.D. home, I didn’t expect him to be the catalyst for self-reflection that I needed. And yet, staring into his eyes that first week, I glimpsed a version of myself I’d never seen clearly before. My future, anchored by this tiny body, now had a shape, a colour—a tail. Previously, I would try to imagine my life in 10 years time and see mist. Now, smoothing back his velvet ears, touching my nose to his, I felt a glimmer of recognition for the next me. There I was, hands a little lined—hands like my mom’s—holding an old mini pinscher.

Just as he launches me forward in time, he pulls me back. Clutching him to my chest at the end of a hard day, I feel six years old again, crying into the plastic fur of a dog I wished were real. L.D. is a childhood wish fulfilled. He is also activating an adult nurturing instinct that previously lay dormant inside me. Real parents will tell me that raising a dog is not the same as raising a child. They are totally right. But through him, I’ve been able to part the curtains of motherhood, just an inch, to glimpse myself inside that world. As I mash leftover yams into his kibble, call him baby, hurt when he’s hurt, I think, is my future self taking over? Will I actually do this for real one day?

He’s with me right now as I write. Curled up in bed like a doughnut, tucked into the C of my torso, he makes a tiny, sleepy groan. I was in a similar physical position—propped up on the left side of the bed, face lit by a screen—when I first saw his precursors, the greyhounds, glowing on my phone over a year ago. I have come full circle. But this time, I have a dog.