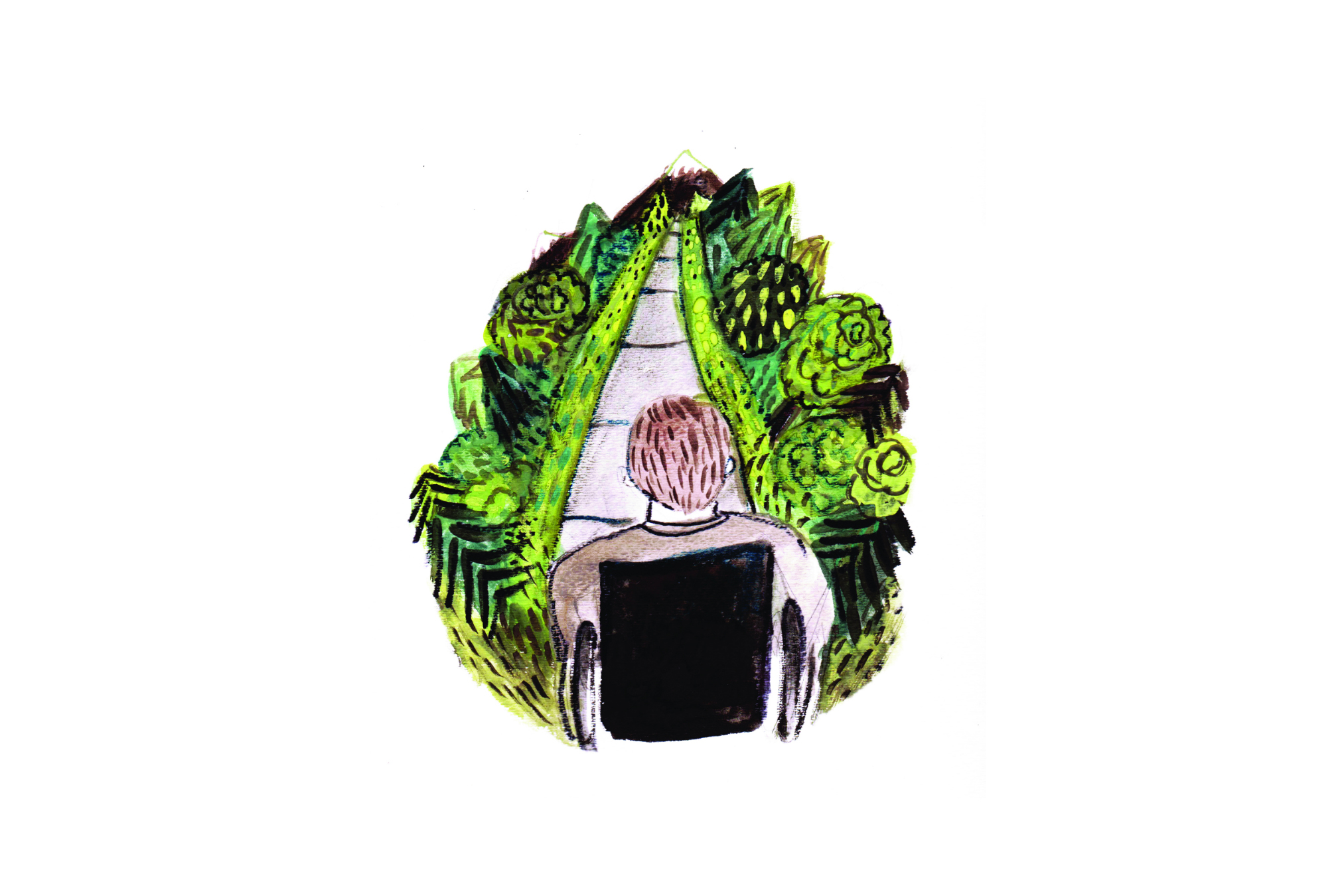 On a peaceful, ocean-perfumed Victoria day—his favourite kind of day—my brother Nathan Moss strolls along the city blocks. He enjoys this time alone, taking the opportunity to think to himself and observe the activity of a burgeoning downtown.

As he zooms along in his electric wheelchair, the old sidewalk begins to narrow—leaving little room for his powered goliath. Unbeknownst to Nathan, his front wheel starts to slip off the edge of the sidewalk. Panic sets in, but he cannot readjust in time. He mutters an angered, “Oh, fuck,” in his raspy, larynx-less voice as his wheelchair topples over, slamming his vulnerable body into the street.

Luckily for Nate, he had forgotten to put his seat-belt on that day, and so he is tossed into the carless road, clear of his wheelchair’s crushing force. Sprawled and dazed, Nathan pulls himself to his bleeding knees. He painfully crawls towards safety, the weight of his body pressing through his hands and onto the sharp, loose stones, his bare legs grating over the jagged asphalt. He sits on the side of the road alone, stranded, helpless. 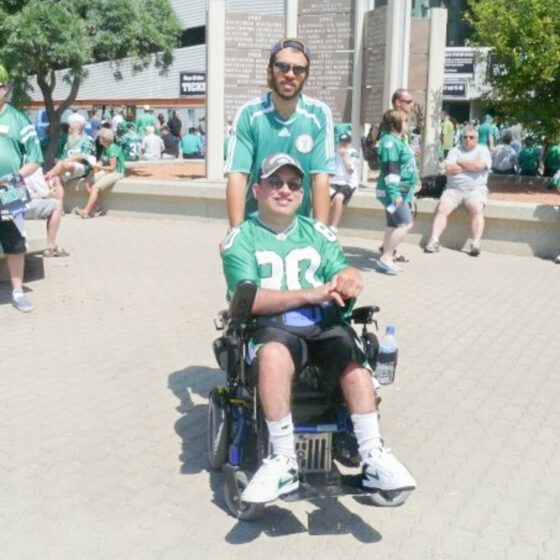 The author and his brother Nathan. Photo courtesy of Adon Moss.

In Canada, roughly seven per cent of our population—2.5 million people—identify as having a mobility disability; and as our generation of baby boomers ages, this number will invariably grow. Still, government policy fails to wholly improve the everyday challenges that people with disabilities face.

Each province designs its own guidelines, and according to the Canadian Disability Policy Alliance—a national coalition of professionals and academics working towards enhancing disability strategy in Canada—policies concerning anti-discrimination of people with disabilities are comprehensive. Yet, there remains a divide between inclusive legislation and the daily realities of living with a disability—such as ill-sized city sidewalks and the imperfect driving of someone in a speedy powered wheelchair.

One problem lies in the difference between compliance and cooperation. When Nathan needs to use a public washroom, for example, simply relieving himself becomes a wildly difficult task. As he puts it, fitting himself into a bathroom stall is virtually a three-person affair: there is Nathan, there is his caregiver, and then there is the metal beast of a wheelchair taking up the most space of all.

The 2012 British Columbia Building Code requires public washrooms to have at least one 1,500-by-1,500 millimetre bathroom stall, with the intention of creating enough space for a physically challenged person to operate comfortably. It is a lot of space, relatively speaking, but it is not nearly enough for three large objects—one inert—to maneuver about. In British Columbia’s Building Access Handbook, a diagram demonstrates a person in a wheelchair in an accessible bathroom transferring him or herself out of the wheelchair, no caregiver included. But that scenario, for many physically disabled people including Nathan, is not a reality.

The Code also only requires accessibility standards to be implemented for new buildings. As such, many older ones are difficult or impossible for my brother to get into, let alone operate in once inside. There are many restaurants, stores, and bars that my brother will simply never get to experience. 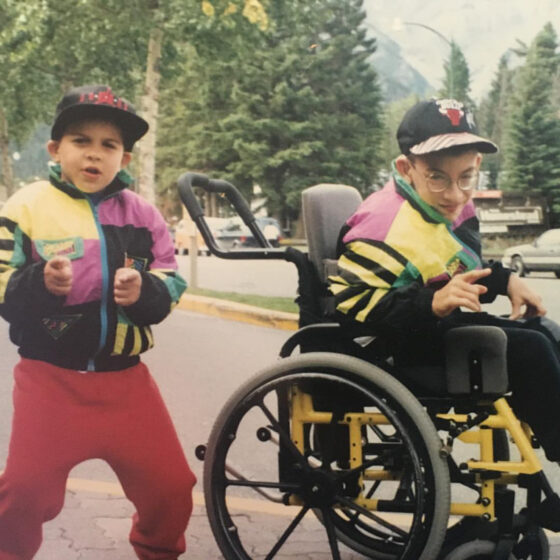 I’m standing outside a Victoria nightclub with Nathan and two of his friends. We’ve got tickets to see the rap group Public Enemy, and arrive early to make sure we get a good spot inside where Nathan can see.

As we reach the front of the line, we explain to the bouncer that my brother will need to use the separate elevator to access the club, which is inconveniently located in a basement.

“Wait here,” he says, and ushers us off to the side, away from the line.

I motion to the bouncer, reminding him that we are still waiting. He nods and finally radios another bouncer.

The other bouncer arrives and asks us to follow him into the adjacent hotel. We go through the lobby, past the kitchen, and arrive at a service elevator, but the bouncer has the wrong key. “Hold on,” he says. Another six minutes pass.

The manager arrives with the right key and summons the elevator, revealing its cramped size: it can only fit my brother, me, and the bouncer, so Nathan’s friends agree to meet us downstairs.

The elevator spits us out near the DJ booth, away from the bar. There are stairs leading to the dance floor, which serves as the main area to view the show—meaning Nathan will only be able to watch from a distance. And then I notice the bathroom, which is much too narrow for a wheelchair. I guess he won’t be having anything to drink. 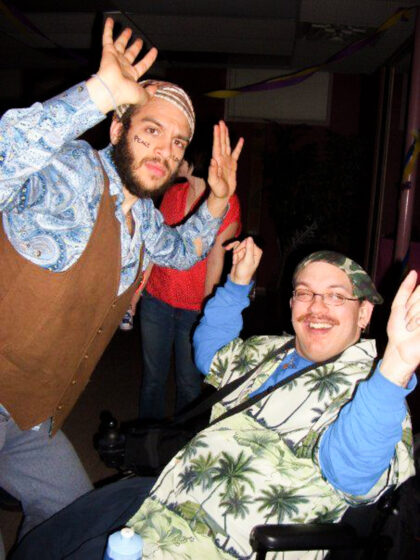 I ask my brother if he thinks the government is doing enough to ensure accessibility for the disabled community. He pauses at the question, and can’t answer me directly.

“I can idealize,” he says. “But I know the financial restrictions that governments face.” For example, the British Columbian government in 2016 revoked a program that discounted bus passes for people with disabilities. Before, they paid $45 a year—now it will surge to a staggering $624.

There are other basic challenges that easily go unseen by those of us with full mobility. Nathan mentions having to wait for someone to open the door to a store without an automated entrance; airlines’ endlessly frustrating procedures and unfamiliarity with his disability; and going to his favourite sporting events, where the crowds stand and block his view during the exciting moments. At most movie theatres, we have no other option but to sit in the lower middle section, craning our necks to see the screen.

In B.C., where the ocean is an integral part of our lives, Nathan has spent decades viewing the water from afar. Only now, years later, is Victoria’s beautiful Gyro Park accessible right to the coastline. In Vancouver, Wreck Beach’s stairs mean it is unreachable; Jericho and Spanish Banks are flat, but have sand for distances that prevent his wheelchair from getting anywhere near the ocean or his sunbathing cohorts. Instead, Nathan must be carried to the water—a frustrating and humbling experience for someone who desires to prove his independence at every opportunity.

Of course, Canada is a greater country than many for disabled people, and Nathan is quick to highlight the positives: the friendly security guard who navigated us through a throng of sports fans and let us watch from the sidelines of the football field; the restaurant with the makeshift wooden ramp that can be placed at the front entrance at a moment’s notice; his friends who lifted his wheelchair up the stairs and into a house party; the people who found him splayed on the street that day his wheelchair tipped over the sidewalk, and assisted him back into his seat. Recently, even, Nanaimo’s Coco Cafe was named one of 18 North American winners of the Ruderman Best in Business Award for its hiring of employees with developmental disabilities, and the Rick Hansen Foundation announced it is launching a national award to celebrate the Canadian towns and cities that are working to make environments more accessible for those with disabilities.

But these encouraging tales are found far and few between, and our governments and communities need to continue figuring out how to effectively integrate accessibility policy into disabled Canadians’ real lives. In the meantime, my brother is left with no other choice but to carry on as he always has, making the best of things in a society that too often forgets he exists. 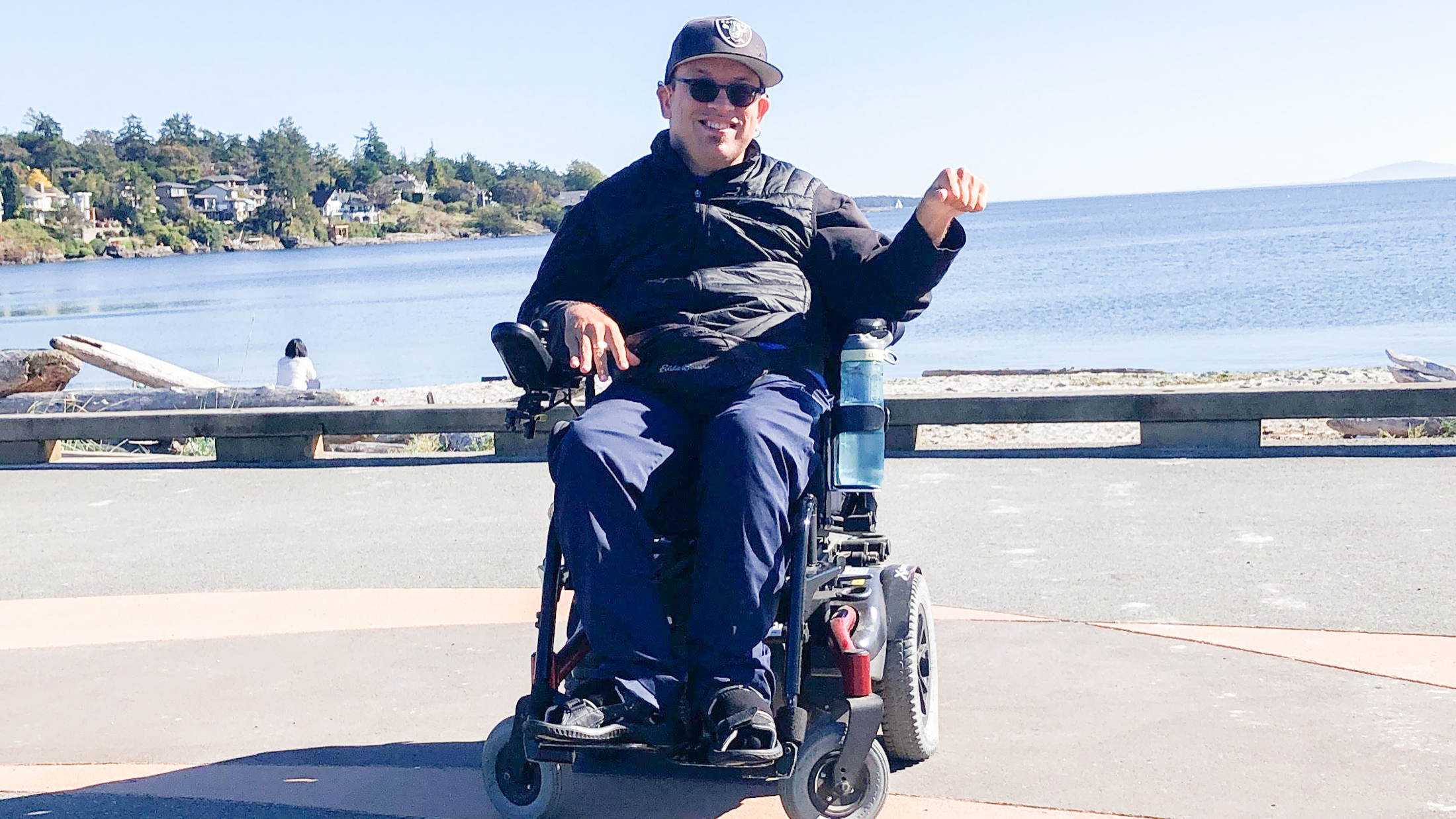 On another ocean-perfumed Victoria day, Nathan sits alone at a bus stop. Eventually the next one appears trudging along down the street, and he readies himself to board. But instead of stopping to let him on, the bus hastily passes him by and trails off in the distance. It must have been too full for a wheelchair; after all, Nathan doesn’t have the luxury of being able to squeeze himself in shoulder-to-shoulder the way most of us would.

As he watches it go, Nathan lets out a sigh, takes a deep breath, and patiently waits for the next one.

This story from our archives was originally published on November 14, 2016. Read more Essays.