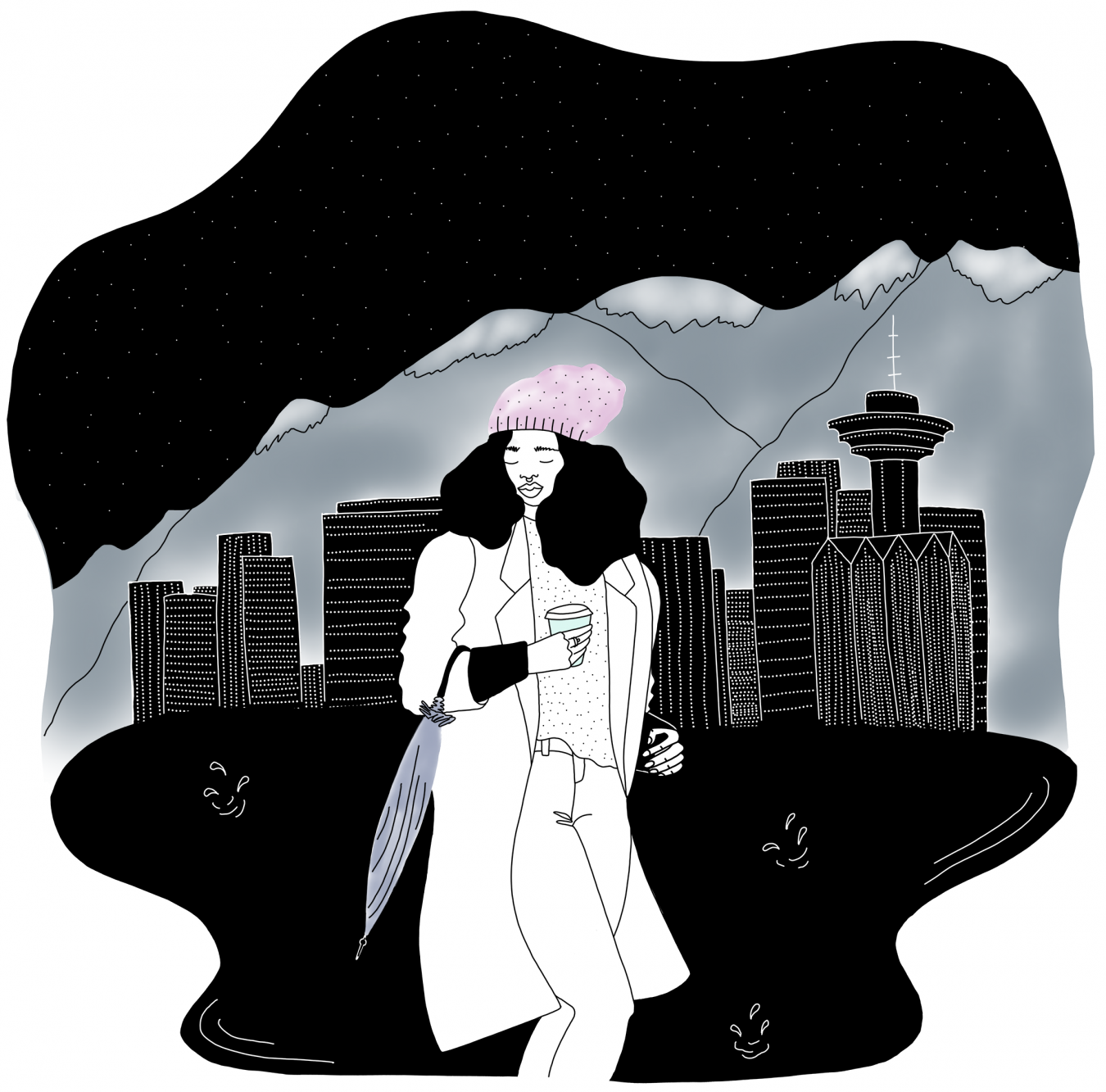 On a good night in Vancouver, neon signs glisten in puddles of rain and the city opens up like a medicine cabinet. On a good night, I feel there is something irreducible about this place, dreamy and different than other cities.

But not all nights are good. I do love my city, but like most things I love, it is the weird and difficult aspects that cement my affection: the sad, breathless weather and the quiet, slightly ominous mountains. I’ve never loved anything too sweet and easy.

Growing up on Vancouver Island, I was only ever a ferry ride away from Vancouver—but the city was like an eyelash, too close to register in my line of vision. When I fantasized (often) about escape, it was to the “great” cities—London, New York—and not the comparatively sleepy metropolis across the water. I managed, still in my teens, to fling myself as far away as Europe for school: Italy and then Scotland, where I went to university in a slanted, sooty city and pretended to be an adult. Things were lovely, but somehow wrong. Two years in I dropped out, halting all my momentum in one move, like a cartoon character digging her heels in the road.

I landed, not on my feet but in Vancouver, far enough away from my family to maintain the illusion of independence and close enough for an intervention should I have another meltdown. The only landmarks I knew were the art gallery and a sushi restaurant that served alcohol to minors. From a fish-tank apartment on the ground floor of a heritage building, I made forays into my adopted home. I was mostly alone but never quite lonely. I noticed right away the feeling of heaviness and potential I’ve come to associate with Vancouver; living here feels like filling a water balloon at a tap.

I fell in step with the way this city works, and saw quickly how interconnected it is—locals are separated by one degree instead of six. I began to feel concurrent comfort and fear, figuring that everyone I knew probably knew everyone else. Shortly after moving here, I met a friend for breakfast in a diner and overheard the couple in the booth behind us—one-half of which I’d met in a writing class—talking about me. I loved it.

I’d come to Vancouver in a cloud of self-doubt but high on the prospect of change. Really, I had no plan. I spun my wheels and visualized a life I could not yet colour with specifics. Vancouver, it turns out, is the perfect place to drink in ambient inspiration, the nourishment of a strange city and a singular setting. I adored the waterfront and the industrial stretches half-consumed by blackberry brambles most of all. Biking or walking through these liminal spaces was like living in a metaphor for my own in-betweeness.

Eventually, I met people who made things or dressed beautifully or lived in mysteriously perfect apartments. I remember bringing a jug of sangria to a new friend’s housewarming party and feeling the thrill of being slightly out of place, the high-schoolish excitement of having people to look up to. Vancouver was the first place I was able to articulate what I really wanted; it was the people I met who made it possible, by their own achievements, for me to visualize the way of life I aspired to live. I started edging closer to the type of person I wanted to be, always fantasizing about Vancouver-specific success: the artful East Van apartment, the certain outfit, the impression (or the reality) of always being just back from vacation.

But once I began to settle into my version of contentment, I felt a familiar desire for escape. The very things I loved about Vancouver—the size, the setting, the people—began to stifle me. For a year I nursed an obsession with moving. Finally, I got a job in London and left in a rush, too scared of jinxing it to tell my friends until I was practically gone.

Almost the moment I got to London, though, my memories of Vancouver started to tug at me. The transition to a new place is always tinged with regret, but I’ve moved enough times to know when homesickness is terminal. I decided to look at London as a detour, a break, even though I’d originally imagined the move as final.

I made it nine months. I was homesick in England, but before that, I’d been sick of my home. I worried I was doomed to bounce between the two extremes.

But the relief I felt when I returned to Vancouver convinced me that my dissatisfaction with the city was, if not unreasonable, at least ephemeral. I was newly appreciative of all that had been lacking in London (space, familiarity, my family), so much so that it almost erased the memory of my earlier discontent.

On a good night in Vancouver, neon signs glisten in the puddles of rain. Even on a bad night, I feel more alive and contented than I have anywhere else. Of course, Vancouver still tests my love and I still get restless when I feel like I’ve tried every restaurant and heard every DJ (or when I think about my real estate prospects). But that tension is what I’ve come to appreciate about my city. It’s anything but sweet and easy.

Vancouver isn’t for the faint of heart; thankfully, my heart is anything but.