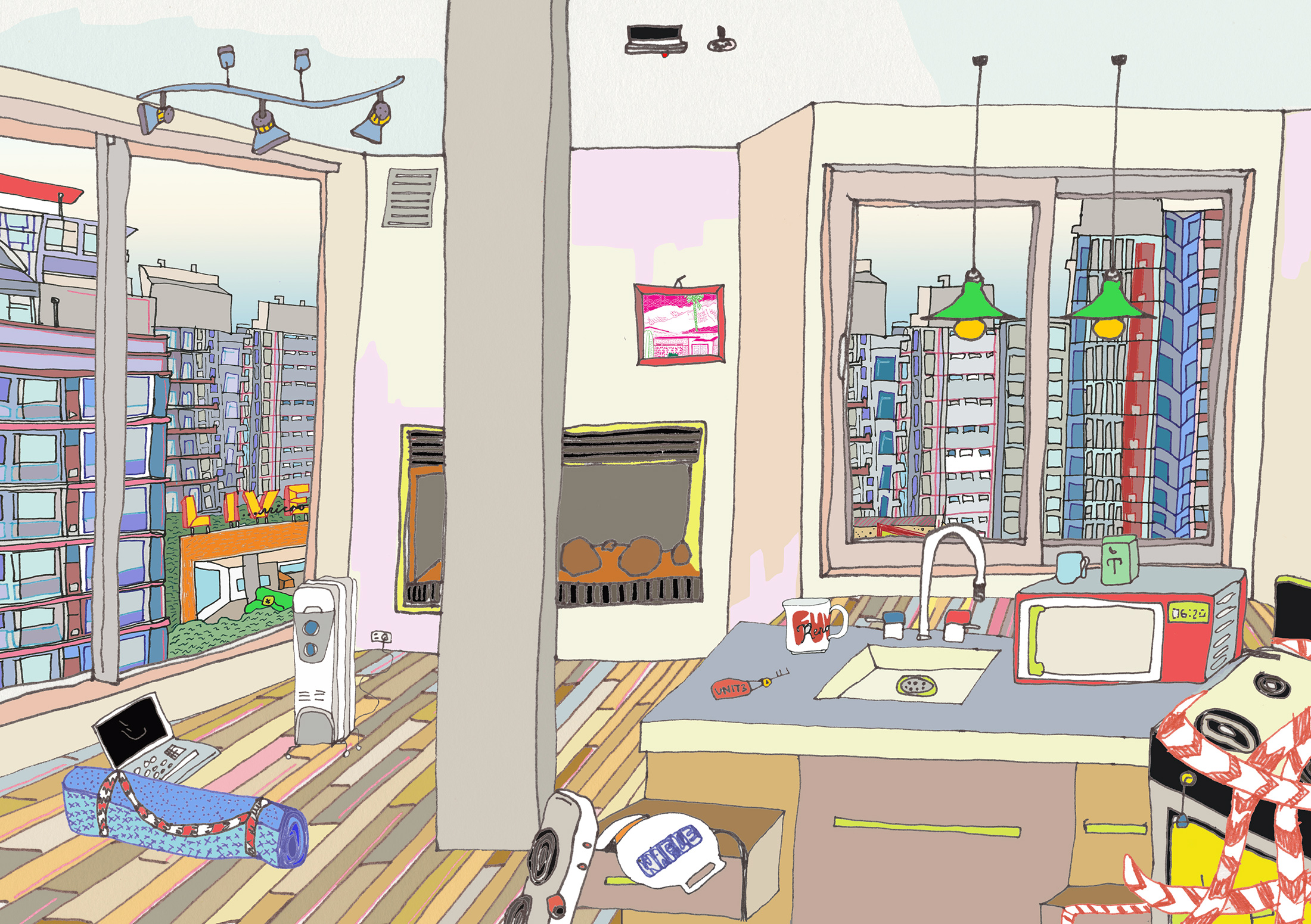 When people ask about the renovation to my 550 sq.-ft. condo, I tell them about permits. If they show genuine interest, I’ll give them what they want, which are stories of hardship. If they want more than suffering, I might reluctantly give them the oven story.

Last summer I bought the condo for $100K over asking (it was priced seductively low) and it’s been under renovation ever since. Home is a misnomer for this place. It’s definitely not my crib. I’ve called it dwelling, purchase, place of abode, residence, construction site, camp grounds. My currently preferred noun is unit.

My unit has no heat. My building does. I don’t. When I get home I take a hot shower, arrange the oil heater in the middle of the living room, and toast my clothes on it. That way I can put on warm socks, warm track pants, a warm hoodie, before I—how to put this?—before I kind of straddle the heater and watch The Office.

That’s it for me. I’ll take questions now. The woman with the lovely Kardashian brows.

Thanks for sharing your story. How long can you live like this?

There is some dispute on the internet about how long a camel can go without water. Seven days. Fifteen. Six months.

I’ve gone eight months with a waffle maker, a microwave, and a plug-in burner.

In eight months, I’ve had five people over. When people enter, their eyes widen. I like looking at them looking at my place. The first thing they notice is the plastic draped from the walls.

One friend said, What’s that show with the serial killer who kills people and blood splatters everywhere?

Dexter. That’s what your place reminds me of.

You, sir, in the Gucci tracksuit.

With no foreseeable end, how do you sleep at night?

Glad you asked. I sometimes drape my throw over the oil heater then wrap myself in this warm confection and fall asleep on the couch while watching The Office.

But for the months that my couch was in storage, I slept on a yoga mat. And before that, I folded my comforter in half and rolled myself into a burrito.

All of my cooking is done with minor appliances. These include but are not limited to the aforementioned microwave, a single coil burner bought from Walmart partway through the oven saga, and a waffle maker.

Of all of these modern conveniences, the waffle maker is my favourite. What is a waffle maker but an unbranded George Foreman grill? I have toasted bread, dehydrated kale, smushed tofu, heated leftover pizza then picked the hardened cheese out of the grooves for bonus leftovers. I have made things approximating latkes and oatmeal cookies. If you have the patience to cook large food objects one corner at a time, then a waffle maker is your Swiss Army knife.

I went vegetarian for many months during the renovation, because of the cows. Methane. Something about global warming. And those detention centres for chickens. I did it for the animals.

You, with the Comme des Garçons sweater.

How do you maintain your dignity through all of this?

What appears to be grace, or at least a zen tolerance for inconvenience, is really helplessness.

I have considered eating a teabag for dinner. I reckon tea leaves count as vegetables.

But don’t cry for me, Argentina. Consider this. How many daily indignities do we bear serenely, only because they are not witnessed by anyone? Alone in my unit, I don’t cringe at my situation. I am not embarrassed by my life, even with its insulation of treasured narratives removed and its delusions exposed like studs in a wall. But only when alone.

Why you need to have one
is not much more mysterious than
why you don’t say what you think
at the birth of an ugly baby.

To be sure, Dunn is writing about a secret life in the mind, not a secret garden in Yorkshire, not a Bruce Wayne/Batman double life, and certainly not the life under construction behind my unit door.

Yet the viability of all these lives depends on privacy, on preserving the contrast between what is known or assumed and what is true.

Privacy here isn’t about ticking a box and clicking accept. It’s about rolling up my yoga mat, smiling at myself, and going along with the assumption at the office that I slept in a bed.

Four months into my renovation, in a house four times the size of my unit, my mother casually said that she was thinking about getting an Alexa. Not an Amazon Echo, but an Alexa, as if Alexa were a maid that would help her around the house. I realize now that she only tossed out Alexa’s name to impress me.

But at the time, I mounted my high horse and went on about the intrusion of tech companies into our lives; about the horde of personal data they collect, manipulate, and sell; about the capitulation of one’s liberties to a device that was always listening; about Big Brother. I might have even said Mark of the Beast.

She didn’t counter my righteousness.

I realize now she may have just wanted someone to speak to.

The poem goes on:

It becomes what you’d most protect
if the government said you can protect
one thing, all else is ours.

From the other side of my open concept livingofficediningkitchen room, I see a cup of tea, twirling in the yellow glow of the microwave.

What would happen if I shared my secret life? if I said to you, Hey, I sleep on a yoga mat.

At first, you’d probably think I was joking. Then there would be the obligatory Canadian politeness and performance of concern. Then the response would continue in one of two directions. 1. You’d feel yourself rising, viewing me from an elevated vantage, and extending those superior relational emotions: pity, judgment, ridicule, ennui, depending on the cast of your personality. Or 2. You would let the secret bond us. In other words, there could either be a growing vertical distance between us or a shrinking lateral distance. The first produces class, the second produces intimacy.

I once applied for an academic job in Reno and my buddy said, Why would you want to live in Reno?

And yet here I am.

Counterintuitive as it may seem, given the travel branding, I think of the discrepancy between my public and secret lives as akin to the difference between Vegas and Reno.

Because of this renovation, I’m now carrying debt, but I’m not poor by any global or national standard.

Still, I’m aware of how easy it would be to cover up poverty in the absence of intimate social relationships. I’ve been showing up to places clean and clothed. That’s pretty much all it takes for folks to assume I’m doing all right. I reckon it’s the same story for people whose secret lives involve mental health issues, chronic pain, and other socially invisible phenomena.

Last question. You, in the Common Projects.