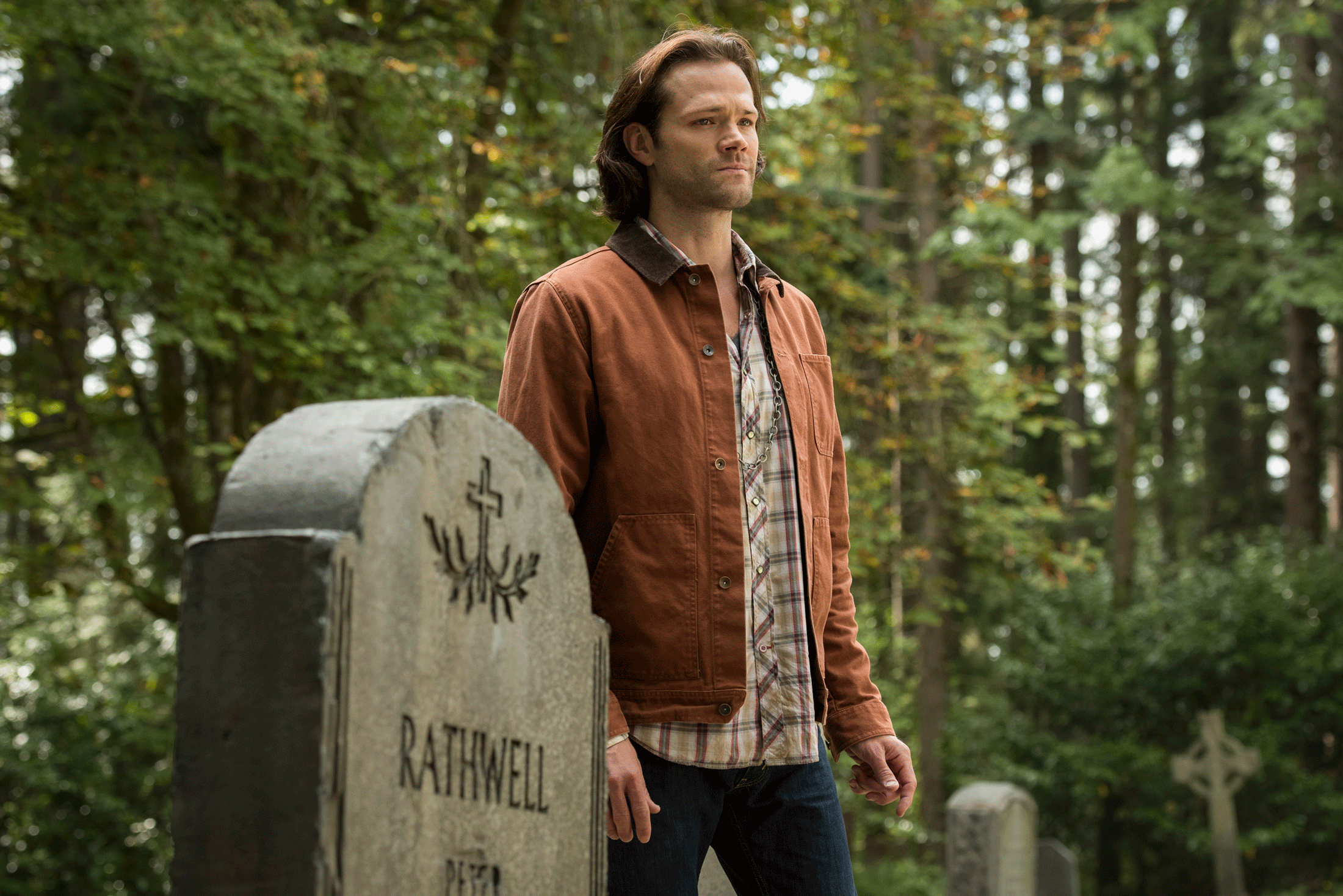 Jared Padalecki is no stranger to Vancouver graveyards, having played Sam Winchester on Supernatural for 15 years. © Warner Bros. Entertainment Inc.

I don’t often spend time traipsing through graveyards, but this is a special occasion.

Walking through the graves, thanking each one she passes for letting us share their space, my friend Kelpi—as she’s known on stage—looks like a fairy with her willowy limbs and fiery hair crowned with a wreath of moss and leaves. Her photographer, Luca, is poised to click, and I trip along behind, arms full of equipment—the diligent coat rack and chipper companion.

The last time we were here was for a Twin Peaks-themed scavenger hunt in the dark (don’t ask) and I don’t recognize it in the daylight. But I could swear that fountain wasn’t there. Or that mausoleum. 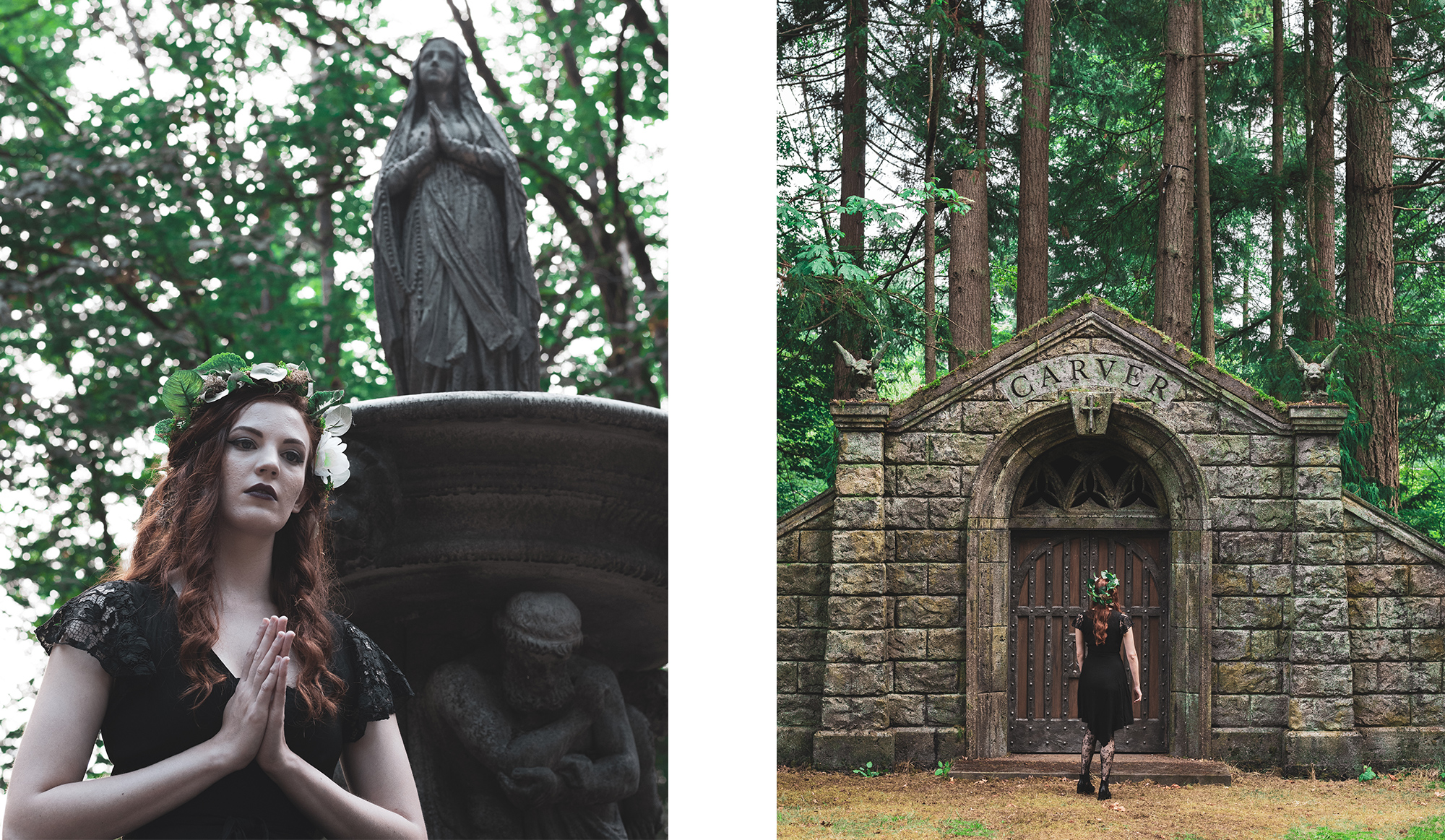 The inscriptions on the graves tell us the stones date back hundreds of years. “I didn’t realize North Vancouver even existed back then,” Kelpi muses aloud, sitting against one.

That’s when I literally trip.

I trip on what’s supposed to be a gravestone, but when I hit the ground, the gravestone falls with me. It’s feather light. It’s made of styrofoam.

Looking around, our perception of the whole yard shifts. It’s fake! While some of the graves are real, largely they’re props, as is the stone fountain.

What the hell is going on here?

Obviously, they’re filming. Didn’t you see the crane when we walked in?

Yes, but I didn’t register what it was doing here.

A security guard comes around the corner to check on us. “This is a Supernatural set,” he explains. 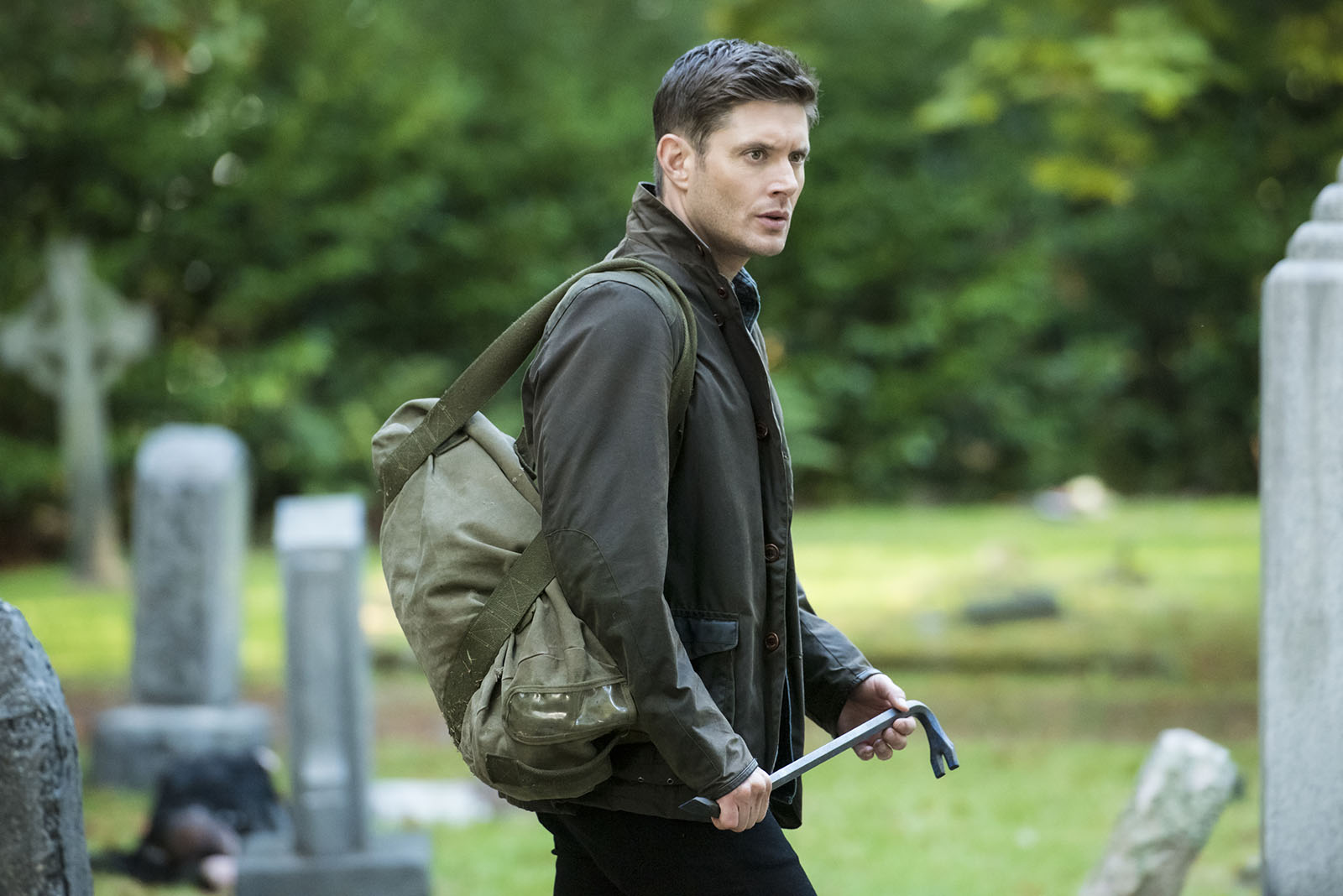 I must admit that I missed the teenage angst-fuelled SuperWhoLock fandom of the 2010s, but I imagine it as a kind of fever dream on the internet that smells like teen spirit. I knew of the TV show tangentially because people on Tumblr were obsessed, and a few girls I went to high school with appeared on the show in minor roles and as extras.

So, to hear that a decade later the show is still filming in my backyard is a bit like being thrown back in time.

With its monster-of-the-week and urban legend storylines, Supernatural has been filming in the Lower Mainland for 15 years, making it the granddaddy of Hollywood North TV projects. Riverdale, The Chilling Adventures of Sabrina, The Magicians, Arrow, and The Flash are babies by comparison.

Once upon a time (also filmed here incidentally), you weren’t a true Vancouverite if you hadn’t had a run-in with Supernatural. Now, as the show wraps its final season, I can’t help but lament that a new generation of Vancouverites will miss out on this rite of passage. Luckily, I’m sure Riverdale and Sabrina are waiting to move into the parks and cemeteries to fill the void.

While 15 years is arguably too long for a teen drama (verging on soap opera territory), the ending is bittersweet for many who found the show so formative.

If you ask any local actor, chances are they have been on the show at some point—especially since the show needed a constantly revolving door of actors to fill the nowhere America towns that Vancouver stood in for. Some were even hired in early seasons and brought back later to play completely different characters. 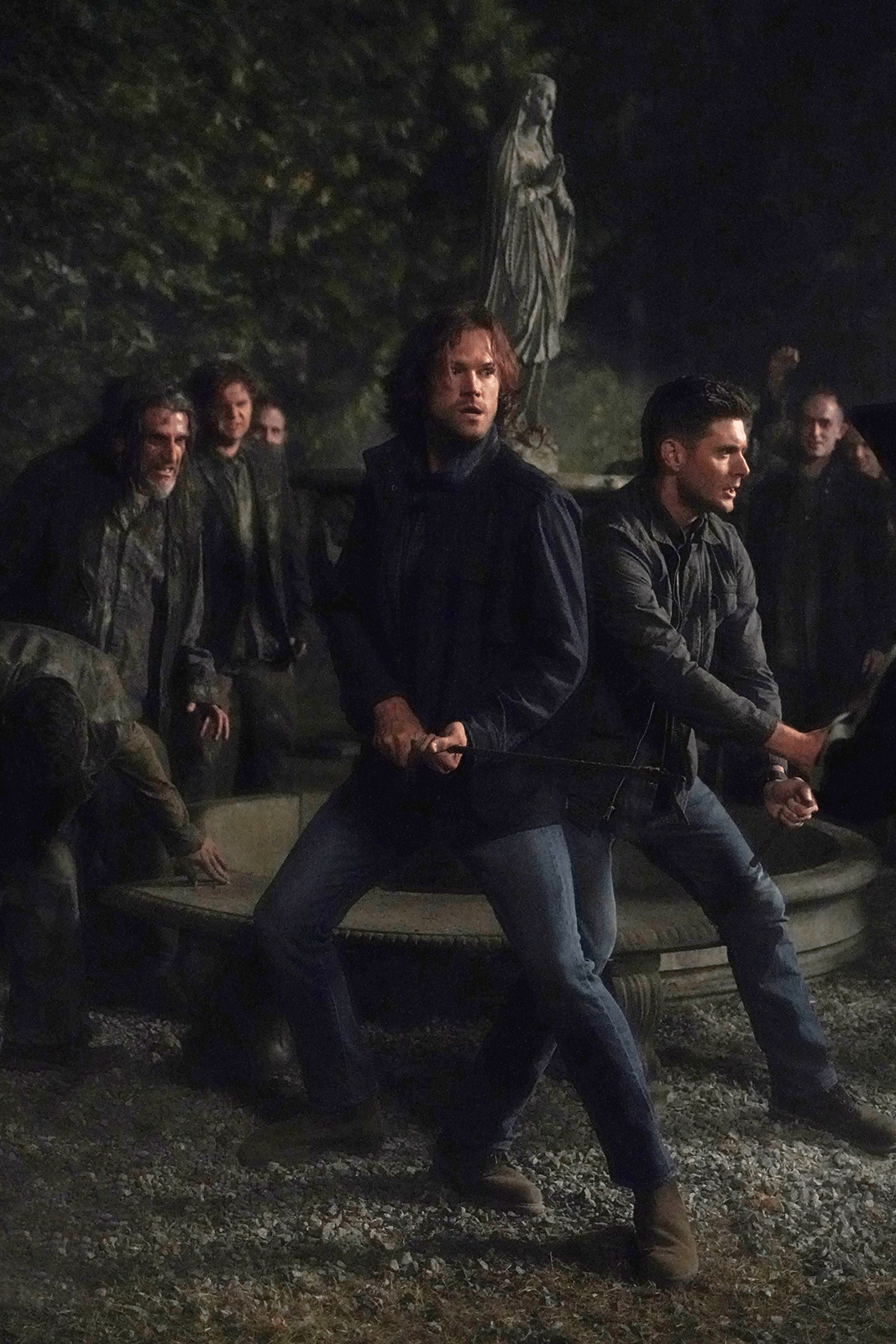 Sam and Dean battle evil (again) in front of a fountain I knew wasn’t there before. © Warner Bros. Entertainment Inc.

Canadian actor Nicole Muñoz grew up with Supernatural. “Although, in the early years I was more preoccupied with letting the friendly-looking albeit cannibal clowns into my home,” she recalls of her first role in the series at age 12. That was in 2006. Now 25, she was brought back for the final season to play a much more substantial role, an experience that meant a lot to her.

“It’s fascinating being on a set with a crew and cast that have worked together for such a long time. There was a familial feeling—a well-oiled and -loved machine. I was very proud to be back on the set as an adult; it was special to have our paths cross one last time.”

Rukiya Bernard had a similar experience when she guest-starred in season seven as Camille Thibodeaux, a fake psychic Sam and Dean are trying to save from a demon. “I died,” she says. “And then in season 13 I played a completely different character, a shapeshifter. I wasn’t sure if the boys would remember me but they did. After 13 seasons and thousands of actors, they remembered. I was amazed.”

Bernard has fond memories of the fun on set. “They were such jokesters while shooting, often messing with takes, cracking jokes with each other and myself. There was an emotional scene for my character and they were mugging behind the camera the whole time.”

Some had a more awkward experience, but no one could say it wasn’t memorable. Supernatural was one of the first sets that 23-year-old interior designer Rebecca Shorin worked on as an extra about a decade ago. “My sister had to be with me,” she reminisces. “You can’t be alone when you’re under a certain age. I don’t think anyone told either of us that we would be branded into a cult that day.”

That’s not a figure of speech; one of the other extras that was supposed to be there didn’t show so they recruited Shorin and her sister to act as initiates to a cult. “I just remember they were telling me to look like I was in pain when I got branded because it would be a close-up reaction and me, with no acting experience, could only muster an expression of looking like I was going to pass out from the pain,” she says. 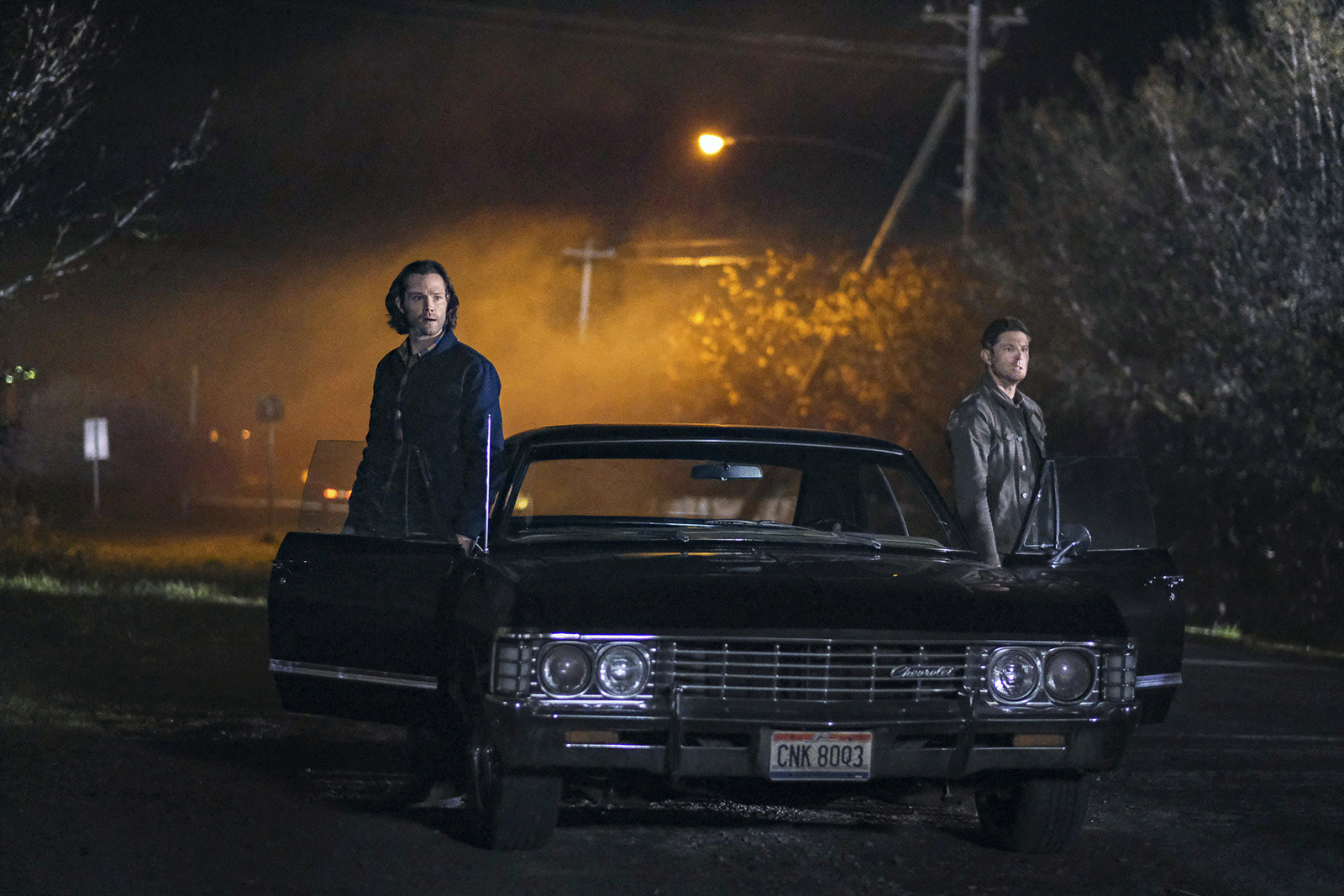 Half the fun of Supernatural for a Vancouverite lies in saying, “I know where that is!” © Warner Bros. Entertainment Inc.

Regardless of the part they played or for how long, each actor I spoke to said the same thing. It was a great time had by all. “I think that’s what kept their energy fresh and entertaining after so many years and storylines,” Bernard astutely hypothesizes, adding: “The crew was such a well-oiled machine—one of the most well-run sets I’ve ever been on. Many of them had been there from the pilot, and the way they communicated with each other was like they were psychic. That show was truly a family situation and an institution for Vancouver.”

Cryptids and urban legends may be Supernatural’s life blood, but the stories that arise from years of late-night skulking through Vancouver create myths of their own. The end of those stories is perhaps worth elegizing more than the show’s conclusion.

So I suppose I’m lucky that my trip into the world of Supernatural happened in the final hours of the show (and a very pivotal scene, too, according to the security guard—the images may contain spoilers). I almost missed my chance for a moment of nostalgia that would make my high school friends proud.

I think Muñoz said it best: “If Supernatural has taught me anything other than what persistence and talent can achieve in this city, it would be not to let cannibal clowns meet the family.”