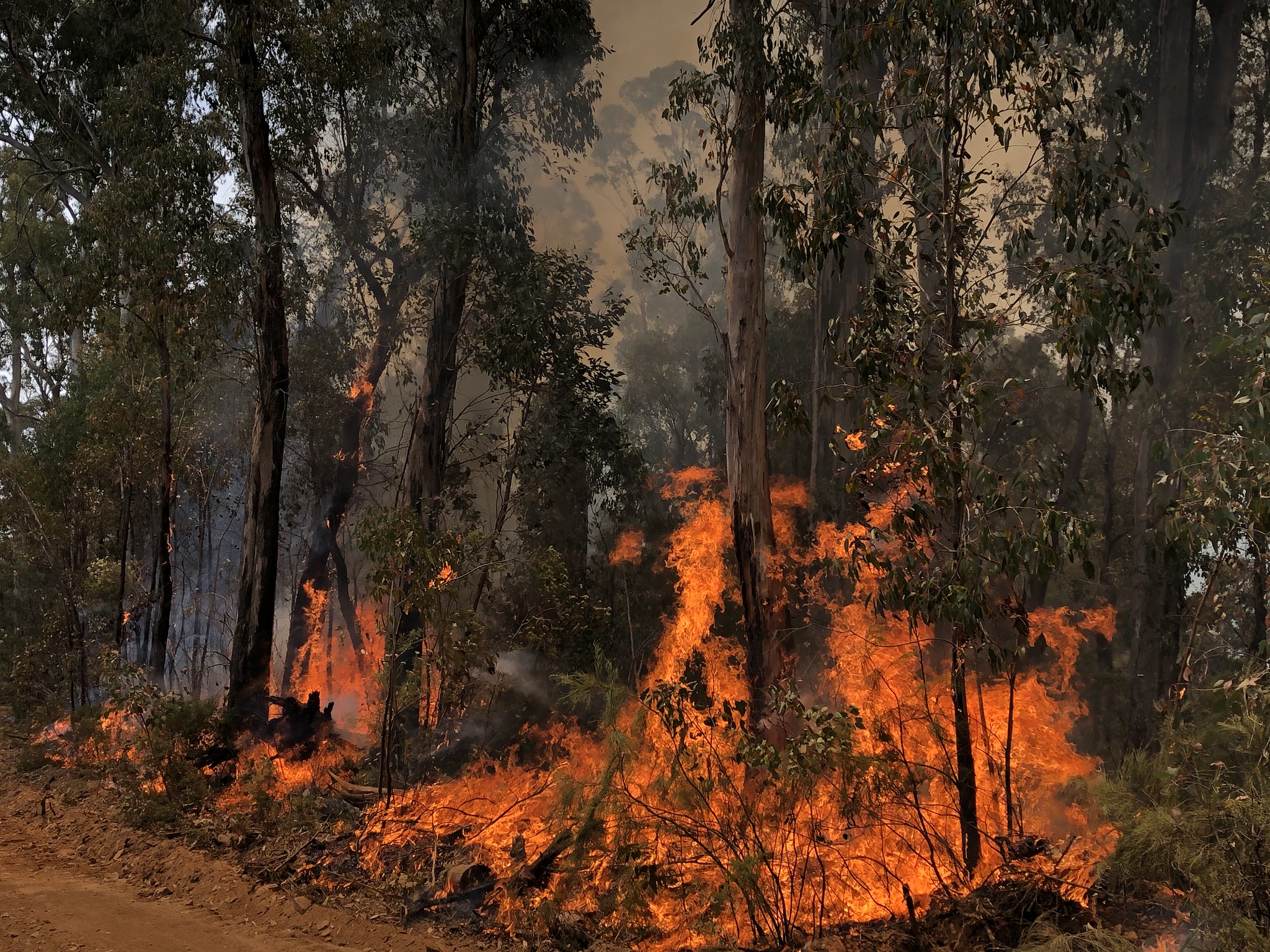 It took three months and help from some international crews to contain the Tambo-35 bushfires in Australia, seen here on January 18, 2020. Photo by Bureau of Land Management Idaho Fire/Flickr Creative Commons.

Most Australians would probably recognise at least the first couple of lines of the second stanza of Dorothea Mackellar’s “My Country,” a sentimental verse composed while the homesick Australian poet sojourned in the United Kingdom in the early years of the 20th century.

I love a sunburnt country
A land of sweeping plains

After which most Australians’ recollection of “My Country” will dwindle into hesitant mumbles similar to those in which the back half of our national anthem is customarily rendered. But just a few beats further on, there’s a perspicacious summary of the trade-off Australians make to live on their—well, our—wild and colossal continent. Unusually in the context of a patriotic elegy, Mackellar acknowledges Australia’s “beauty and her terror.”

Australians have understood for a long time that our country is fierce, and brutal. Even if you grow up in Australia’s cities, as this correspondent mostly did, you become accustomed to the everyday accommodations: giving any boots left out overnight a good shake before putting them on, lest they be squatted by spiders; tramping loudly through any bush to furnish the snakes with advance notice of your arrival; sleeping with earplugs installed to protect your hangover from the cackling of kookaburras. As a long-time Londoner who usually reacquaints himself with the old country for a few weeks around Christmas and New Year, I kind of enjoy returning to these rituals.

This southern summer, though, Australia’s peculiar elemental ferocity roared several magnitudes beyond the picturesque, as monstrous bushfires consumed New South Wales and Victoria. If such disasters are measured in loss of human life, Australia has endured worse—Black Saturday 2009, Ash Wednesday 1983, Black Tuesday 1967, Black Friday 1939. But those were all relatively sudden cataclysms—fires that ignited, devoured and subsided within hours, days at the most. Though obviously tragic, they were absorbed by the Australian psyche as the kind of thing that happens from time to time, like floods or droughts or cyclones. The fires of 2019-2020 feel different. 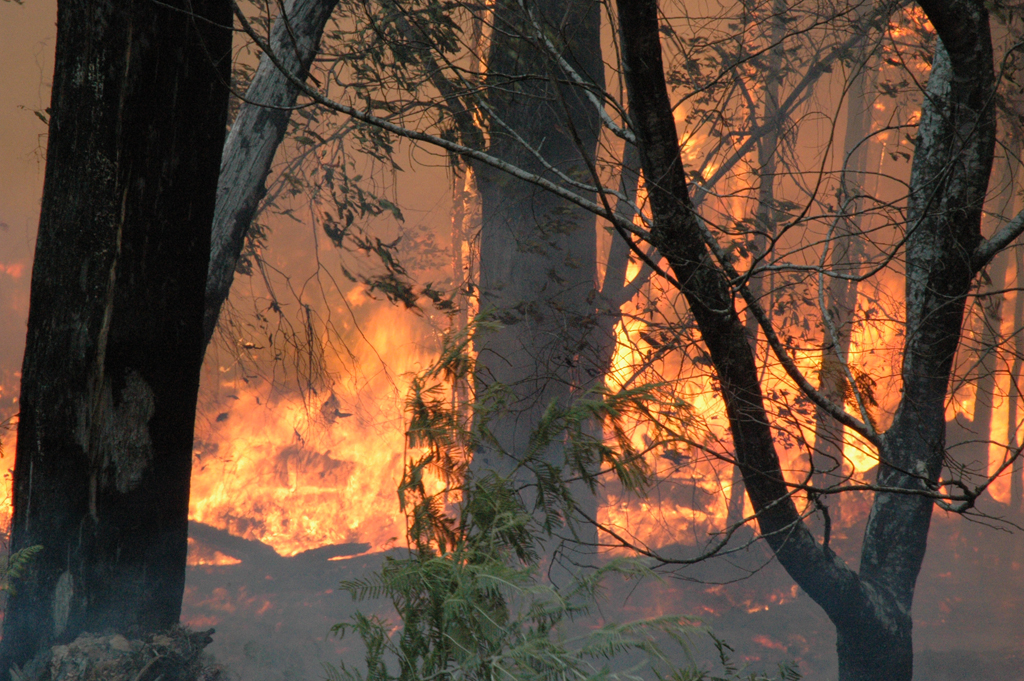 It’s partly their sheer scale. Canadians are harder to befuddle than Europeans with delineations of Australia’s vastness, but at time of writing, in early February, the total area of land incinerated is reckoned somewhere north of 110,000 square kilometres—so, similar to Bulgaria or Cuba or Iceland. Nearly four Belgiums. If translated to Canadian, two Nova Scotias. And it’s partly their timing: it was clear as early as November that these fires were something extraordinary, and that’s three months ahead of what Australians consider real bushfire season. Almost all of Australia’s worst bushfire disasters have occurred in February.

The most significant aspect of these fires, however, is an unease at what these terrific infernos—and the hostile weather fanning them—may portend. My Australian friends, family, and colleagues do not tend toward the melodramatic. But many who live outside the cities, or even in leafy parts of town, spoke of keeping a go-bag by the door. One resident of the beautiful but combustible Blue Mountains, west of Sydney, admitted having the car permanently packed with essentials should a quick getaway become necessary. Another, who lives amid towering eucalypts in the leafiest reaches of Sydney’s north, said he’d installed an expensive sprinkler system, but shruggingly acknowledged that, if called upon, it would only do so much. Two uncomfortable questions underpin such conversations, at a personal and a national level. One is: is this how we live now? The other is: have we, as a country and perhaps as a planet, stumbled past some point of no return?

I was in Canberra on Saturday January 4. It was the hottest day in Canberra’s history, nearly 44 degrees. Sunday, January 5, was mercifully cooler, but a great deal stranger. A thick blanket of bushfire smoke unfurled across the city. It was barely possible to see to the end of my brother’s street. Going outside for any amount of time endowed clothes and hair with a perceptible smell of soot that lingered once back indoors. We drove, headlights on, through a grey-orange haze to the Yarralumla foreshore of Lake Burley Griffin, from where there is usually a pleasant view across the water to Black Mountain, and the quaint 1970s science-fiction telecoms tower at its summit: there was no sign of either.

Weird though all this was, it was made weirder still by the knowledge that this astonishing pall—which also prompted cancellations of flights from Canberra’s airport, the suspension of postal services, and the closures of various institutions—was being generated by blazes hundreds of kilometres from where we stood, idly regarded by a mob of the kangaroos which inhabit the vicinity. The grass beneath them, where grass there still was, had long since withered yellow. This summer in Canberra, almost everybody lost their lawn.

The fires got closer to Canberra a few weeks after I left, prompting anxious recollections of 2003, when hundreds of homes in the usually sleepy suburbs of Australia’s Ottawa were lost to fires, and four people killed. At the risk of tempting fate, it wasn’t that bad, this time. But one did not require an especially rarefied appreciation of metaphor to perceive something more than a fire in pictures of parliament house dwarfed beneath an angry red sky. This summer’s fires have been answered in scale only by the bewilderment of Australia’s government—in particular, of Australia’s prime minister, Scott Morrison.

Morrison’s fumbling of the fires has been surprising, yet not. Surprising, in that anybody who gets his job knows that at some point they will be called upon to comfort Australians whose properties have burned down, or been washed away, or blown over. You’d think they’d rehearse something.

It would be little consolation to the many Australians presently contemplating a long, tedious, and expensive rebuild, but there are potential phoenixes hatching in these ashes. If Australia—vast, wealthy, secure, educated, inventive, adaptive Australia—is not poised to lead the world in search of a renewable future, it’s tough to imagine who is.