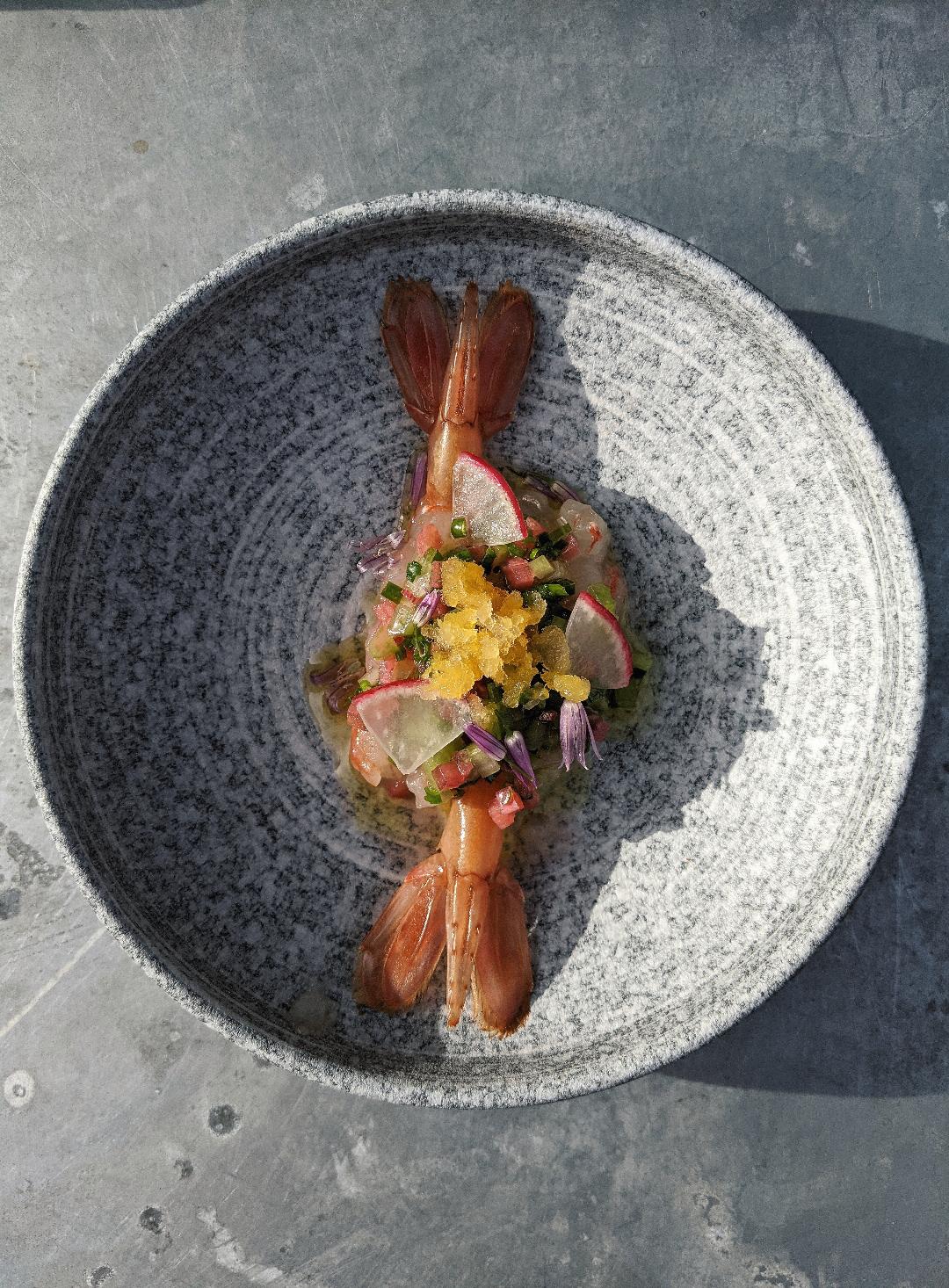 The pale-green wrinkled leaves of rhubarb unfurling from its root in the soil signal the awakening of spring for Mark Cormier, farm manager of Glorious Organics. The collective operates on Fraser Common Farm in Aldergrove, using sustainable and regenerative agriculture to grow a host of vegetables and fruits, including Gem lettuce, radicchio, Chioggia beets, and golden plums. This produce makes its way to farmers markets and restaurants around the Lower Mainland, into the hands of people committed to supporting and learning about local agriculture. “People are interested in what farmers have to say more than they’ve ever been before,” Cormier says.

He particularly loves talking about rhubarb because it’s a perennial, which means “it’s a cool crop that keeps producing and you don’t have to mess up the soil.” The untilled soil where rhubarb grows becomes rich in micro-organisms—vibrant and healthy.

The rhubarb plants have been around “a long, long time,” predating the 12 growing seasons that measure his time at the farm. Over winter, the rhubarb lies dormant as a gangly, unremarkable root in the ground, but around late March, it begins to sprout.

Rhubarb is a finicky plant that has to be tended the entire year, Cormier explains: “It’s a lot of work, but if you take care of it properly, it produces a lot for a good chunk of time, and it makes it worth it.” This nurturing means adding compost to the soil for the slow release of nutrients, constant hand-weeding, and watering every couple of days when the weather is particularly warm. 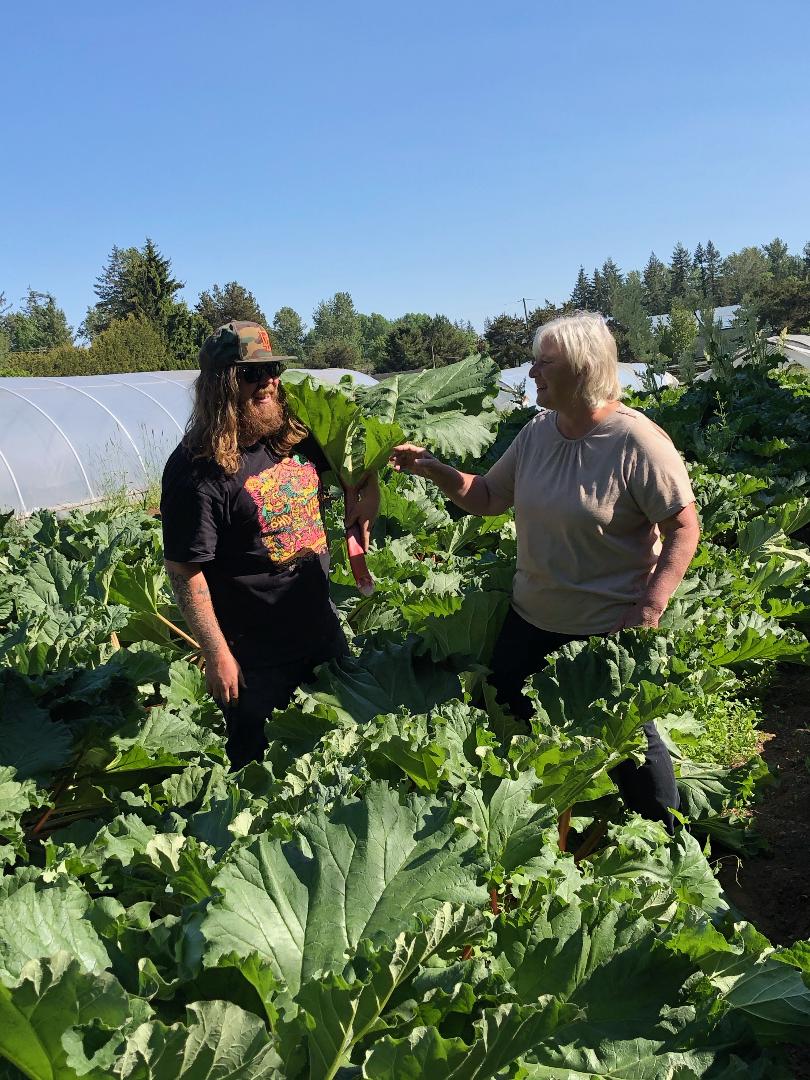 The reward is the first harvest around the third week of April, when Cormier selects the largest stalks to remove, spurring the growth of the rest of the plant. “I grab it down really low, from the bottom of the plant, pull it sideways, and it pops out. And then, you have to chop off the leaf because the leaf is poisonous,” he says. Cormier then picks in a frenzy until June when the weather becomes too consistently hot for rhubarb to flourish. At rhubarb’s peak, Cormier estimates he and his workers harvest around 1,200 pounds per week from their farm and their nearby partner, Friesen Farm.

Every Thursday, the harvested rhubarb is loaded into sacks, along with other produce, and onto a truck that travels to Vancouver. It makes drop-offs at well-known bakeries, restaurants, and other food establishments, such as Thierry, Livia, Elisa, and Earnest Ice Cream, who use the rhubarb in Danishes, ethereal pavlovas, and ice cream with oat crumble. Many chefs from restaurants like Dachi and Ugly Dumpling also visit Glorious Organics’ stall at farmers markets to browse for their fresh sheets.

Glorious Organics maintains a particularly long-running and warm relationship with Andrea Carlson, chef and owner of Burdock & Co. Carlson first learned about the collective (previously Glorious Garnish and Seasonal Salad Company) in the 1990s when she was a young chef at the now-closed Star Anise Restaurant and met Glorious co-founder Susan Davidson. Carlson has continued sourcing from it throughout her career, including as chef de cuisine at the former Raincity Grill and executive chef Bishop’s, and now as proprietor of her own establishment. 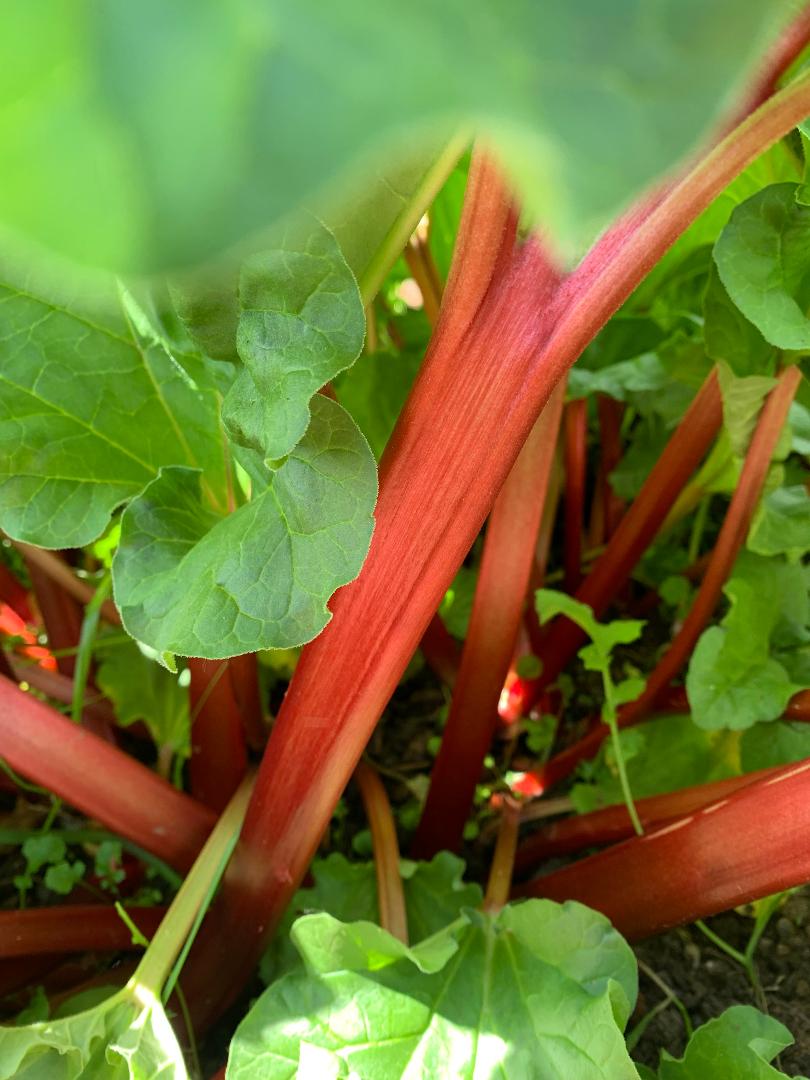 While Carlson acknowledges the term farm-to-table started as “a restaurant identifier,” she argues that it has evolved to signify a dynamic, integrated local food system involving people from the farm to the consumer.

“On account of the pandemic, it’s come to the forefront of people’s purchasing minds that they need to support their local producers and growers because of the hard time we’re in,” she says. Carlson also points out that there has recently been an explosion of access to local goods, through the CSA program at Burdock & Co and sister establishment Harvest Community Foods, and even larger chains like London Drugs.

For Carlson, “farm-to-table” is not just about buying local goods but also an ethos that celebrates “the anticipation of the seasons and the particular products that a grower will have.”

In the case of rhubarb, Carlson views the vegetable as a sign of renewal after a dark, lengthy winter. “It’s so beautiful with its big pop of pink. The acidity of the rhubarb is so great on your palate, and it’s so invigorating in the spring,” she raves. She also says rhubarb is versatile and can be incorporated in both savoury and sweet dishes.

Carlson drew on rhubarb’s acidity in a spot prawn crudo she crafted recently, explaining that “rhubarb is one of the citric acid alternatives that we can play with in the Pacific Northwest.” The dish features fresh spot prawns from Organic Ocean, crunchy brunoise-cut rhubarb and celery, and delicate chive flowers. Carlson dresses the dish with a house-made rose vinegar for some final floral zing. The assembled dish is playful, pretty, and refreshingly local. 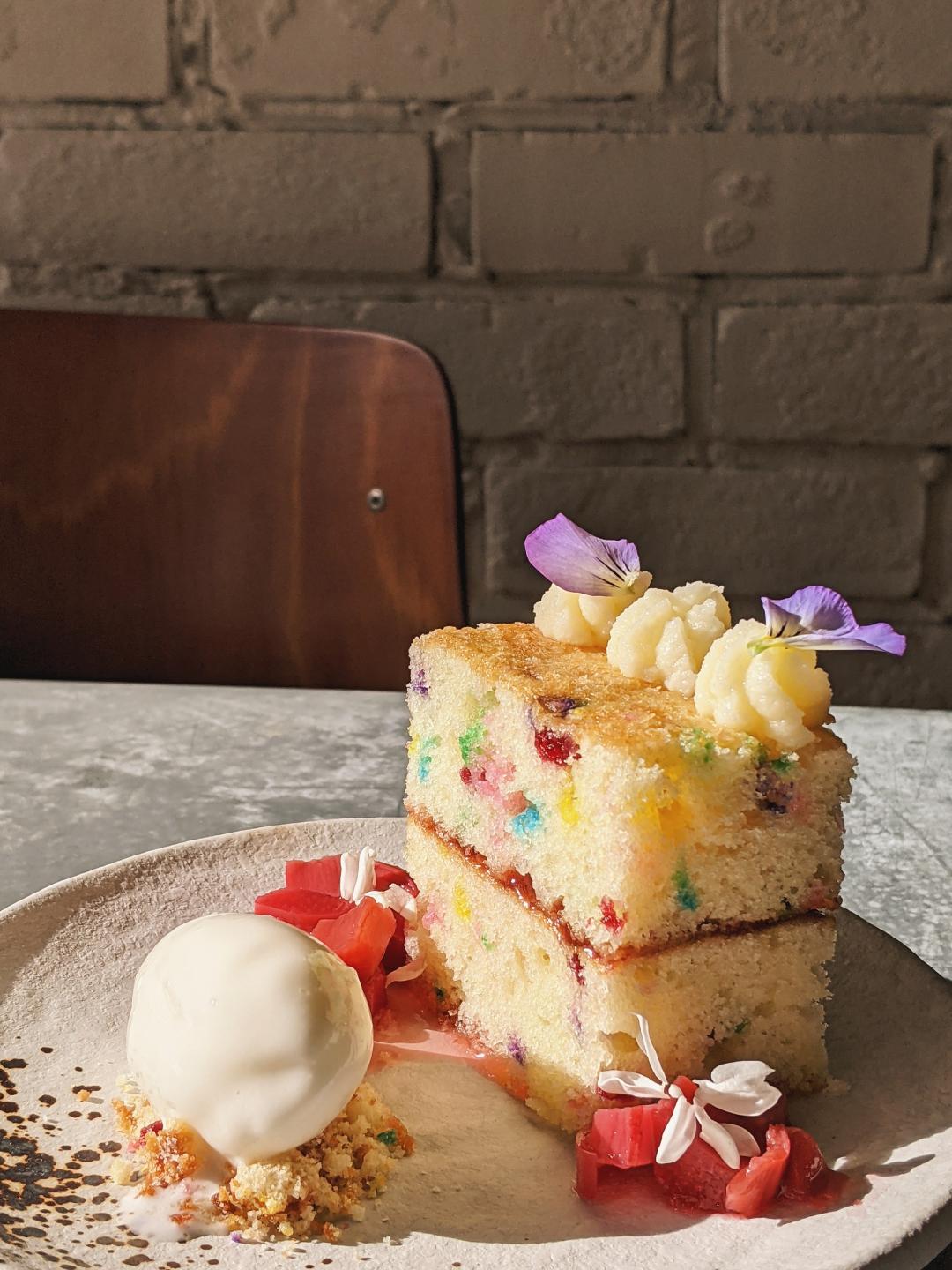 Meanwhile, fragrant sweet woodruff growing in Carlson’s home backyard inspired her to create a rhubarb-themed dessert in honour of Burdock & Co’s eighth anniversary. “Seeing the woodruff so happy made me think of rhubarb, which goes so well with it,” she explains. Carlson poached the rhubarb in a syrup of woodruff to impart its vanilla notes and then plated it with a festive funfetti cake. The two layers of white cake were dotted with house-made raspberry sprinkles, sandwiched with rhubarb jam, and served with a scoop of elderflower ice cream on the side. “It’s as birthday party as you can get,” Carlson laughs.

While Carlson is serious about the farm-to-table ethos, she also wishes to share the fun and whimsical side of local ingredients. The journey of the rhubarb that started on Fraser Common Farm concludes on the plates at Burdock & Co, beautifully evidencing a joyful and informed relationship with food and local growers.