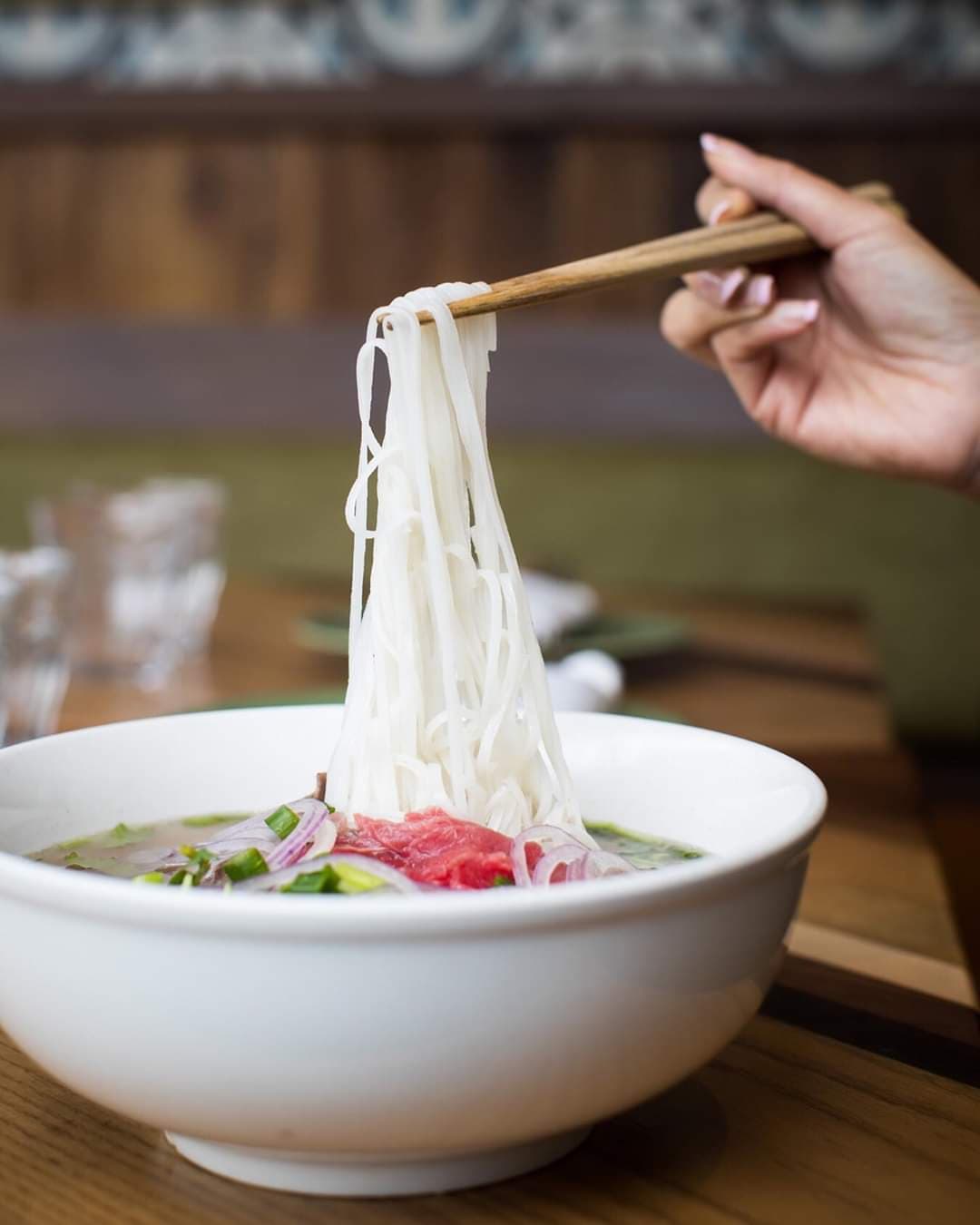 Photo by Ben Nelms/Courtesy of Anh and Chi.

Vancouverites are in love with pho. Especially during the rainy season, what better to slurp than a soothing bowl of steaming broth, with aromatic herbs, tender beef, and chewy rice noodles?

The first step is to deeply inhale the scent of the broth as soon as the bowl is set down in front of you. The smell and taste of a good bowl of pho reveals the personality of the dish and its cook, setting the tone for the rest of your meal.

While most of us may be familiar with the southern style of pho, the dish actually found its origins in the northern Vietnamese village of Văn Cú. Street food vendors boiled beef bones with local ingredients such as star anise, cinnamon, coriander, fennel, and fish sauce to produce a clear, nutritious broth for noodle soup that quickly gained popularity. As the dish was shared throughout the country, southern chefs added more ingredients, including ginger and onion (slightly charred to release the sugars) to produce a sweeter, more robust flavour.

As it was adopted into local cuisines all over the world, many different varieties have since emerged. And many of them can be found in Vancouver—if you know where to look. 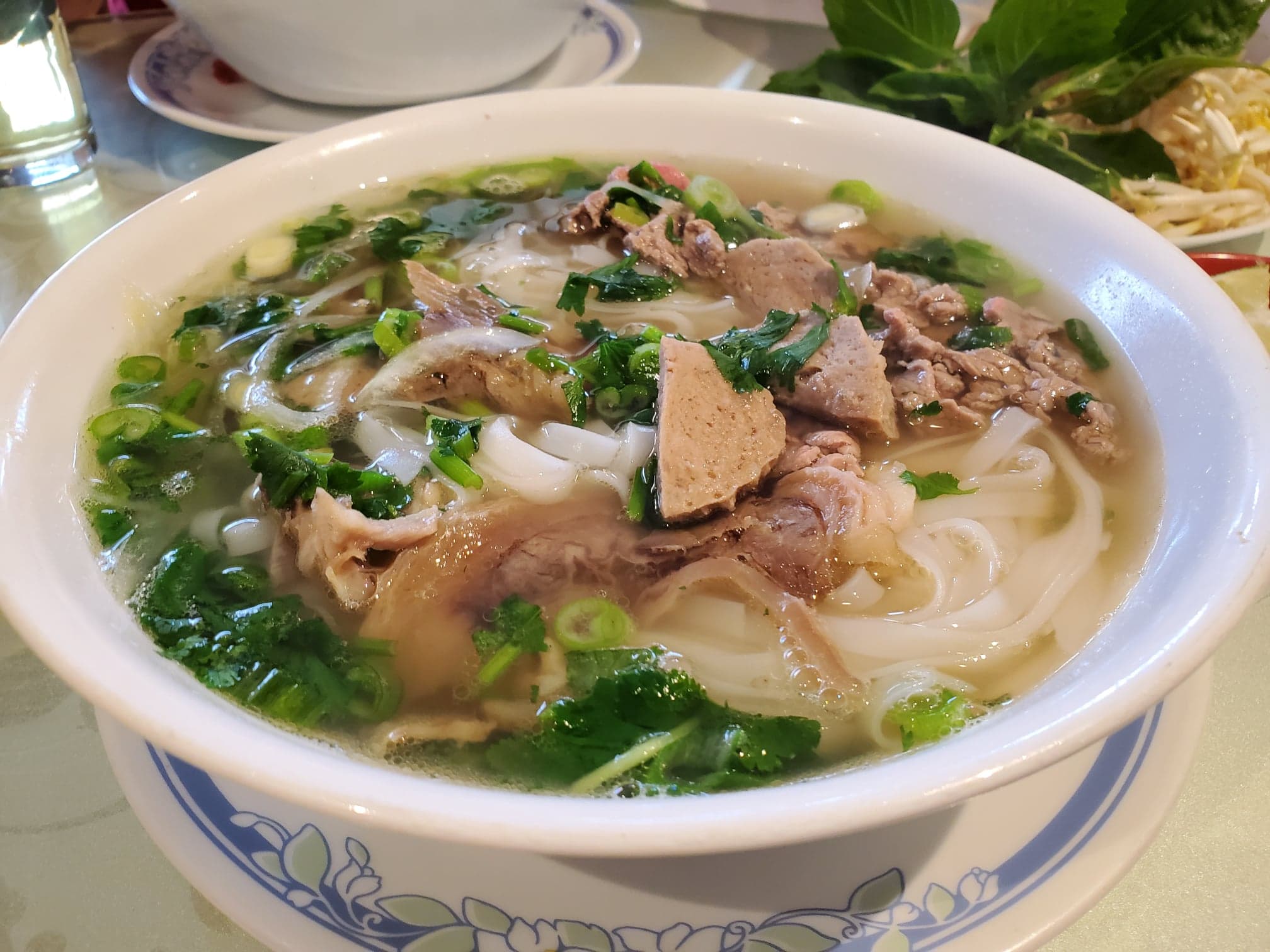 To experience pho in its northern style, pay a visit to Cafe Dang Anh on Victoria Drive. Tucked at the base of an apartment complex, it’s easy to miss this hidden gem where the house special, phở dặc biệt, shines at being simple yet satisfying. The dish combines all the trademarks of northern pho—wide rice noodles, simple slices of beef, green onion slices, and a light, clear broth—for a delicate flavour that brings comfort with every mouthful. While southern-style garnishes and sauces are provided, it is best to use them sparingly, if at all. Made from chicken stock instead of beef, this broth is a perfect reminder that condiments in pho are optional. Don’t miss the deep-fried spring rolls for a different kind of crunch in their flaky pastry wrappers. 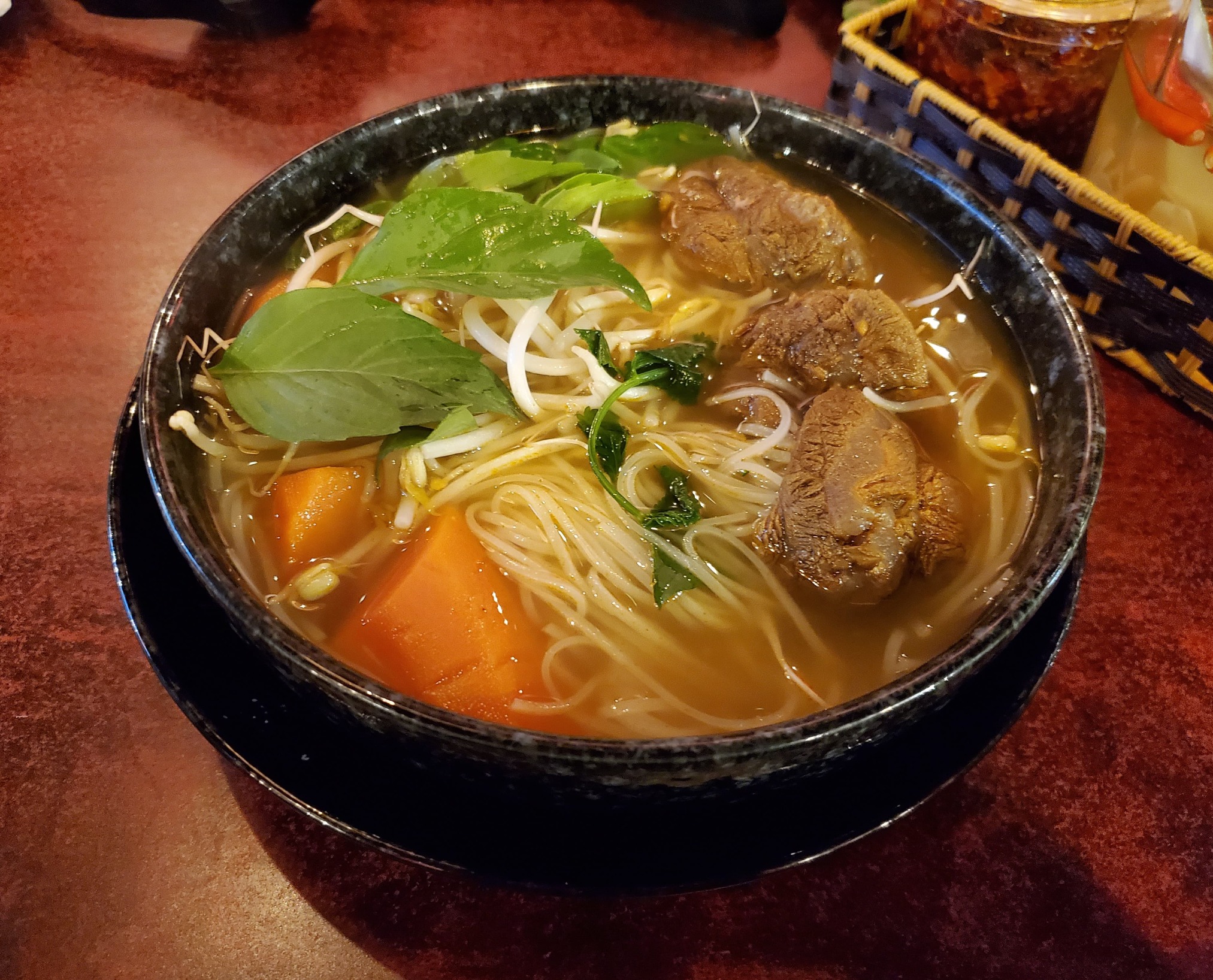 With its two locations on West Broadway and East Hastings, and its traditional decor, music, and even a counter dressed like a stilt hut, Mr. Red Cafe transports your taste buds to the Vietnamese capital with a Hanoi-style bowl of phở sõt vang. The beef in this dish is simmered with jumbo carrots and the resulting translucent orange broth contains the subtle yet distinct sweetness of the vegetable. Pluck a few leaves of basil and add them to the top of your dish. Don’t cook the leaves by pushing them into the broth. Instead, drop some leaves after every few mouthfuls for a sweet, peppery taste that blends with the carrot-imbued broth. And share a plate of xôi xéo pâté gà, with its layers of savoury chicken, pork floss, and liver pate topped with fried shallots on a bed of sticky rice. Liberally sprinkled throughout, shaved mung beans provide a neutral taste that cleanses the palate after each bite. 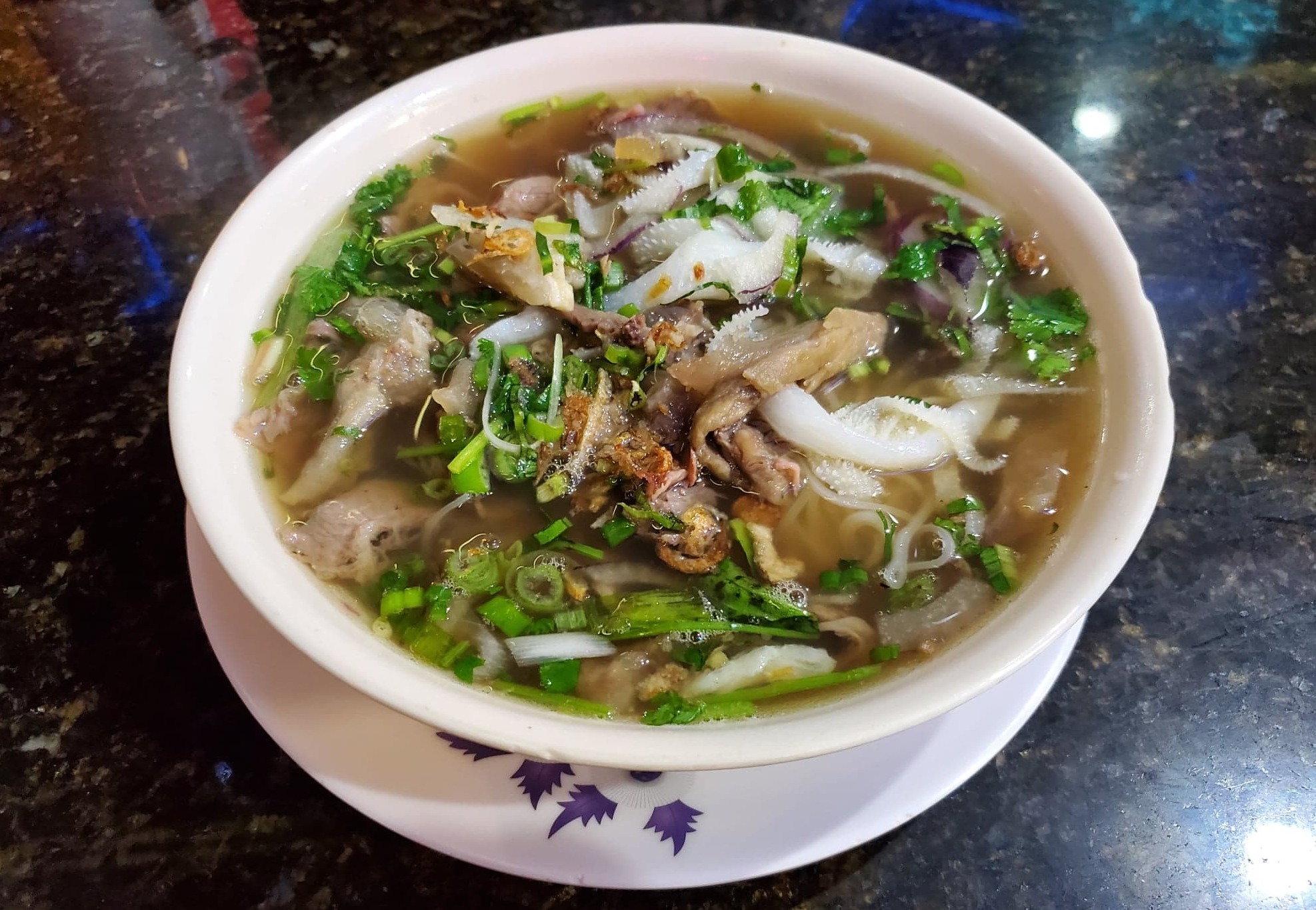 Open 24 hours, Gold Train Express and its glowing neon signs are a familiar sight to many Vancouverites looking for a late-night meal on Kingsway. If you want to savour the different meat textures that southern-style beef pho can offer, try the phở chín nạm gân sách. Nestled in warm, amber broth are soft pieces of flank and brisket mixed in with more exotic cuts of chewy tripe and perfectly boiled tendon. After tasting the broth, pick up a piece of meat with your chopsticks and dip it into a saucer filled with a mix of half sriracha and half hoisin sauce. It’s best to leave the sauces for dipping—the restaurant also offers a selection of spicy pho. If you still have room, order a lemongrass chicken salad roll. You won’t find it on the menu, but you can request it as an appetizer. Made mostly of fresh, neutral ingredients, the little bursts of lemongrass chicken are a delight with every chew. 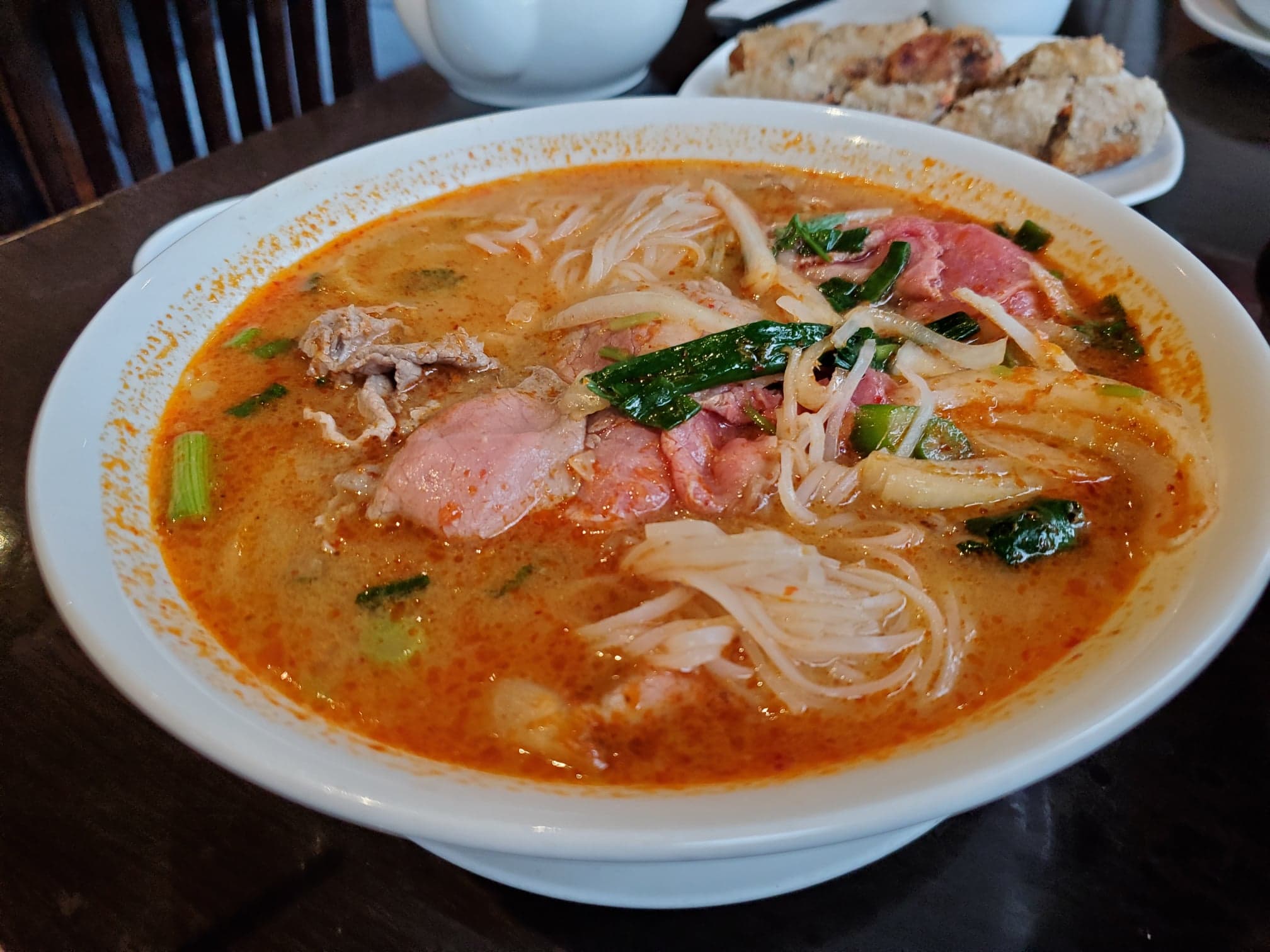 Regulars of Pho Tan on Main Street get excited when they talk about the restaurant’s pho bò satay soup. While still comprised of beef slices, rice noodles, and herbs, this dish distinguishes itself with its rich, milky broth. And it is quite spicy. Should you find it more than you can handle, a generous helping of bean sprouts might provide some relief. In order to fully taste the different flavours in the soup, alternate between spoonfuls of broth and mouthfuls of noodles. The broth itself has a warm, solid body, which the noodles slowly release to allow you to taste the distinct flavours of coconut milk, spicy chili, and peanut sauce with every mouthful. Deep-fried spring rolls pair well with this meal and for something different try the salty plum soda, which is as weird as it sounds.

Photo by Ben Nelms/Courtesy of Anh and Chi.

Nestled between Main and E 18th Ave, Anh and Chi (which means brother and sister) is the place to go for a pho experience that is uniquely Vancouver. Their phở hoàng broth knows exactly which taste buds to hit, its noodles stay thick and firm, and chunks of sirloin in the soup offer the unexpected sensation of eating a really juicy steak. Add a handful of bean sprouts for added texture—immersed immediately in the liquid for soft sprouts or added on top if you want some crunch in your pho. Condiments such as a splash of lime, strips of basil leaves, and spicy slices of pepper add layers of subtle flavour that blend into the broth. Another treat is the Cay Me salad roll, which is particularly refreshing thanks to ingredients such as toasted coconut and jicama. Complete your meal with a Coconuts And Dreams cocktail—the freshness of coconut is paired with tart green mango juice, an ingredient rarely seen in Vancouver cuisine.