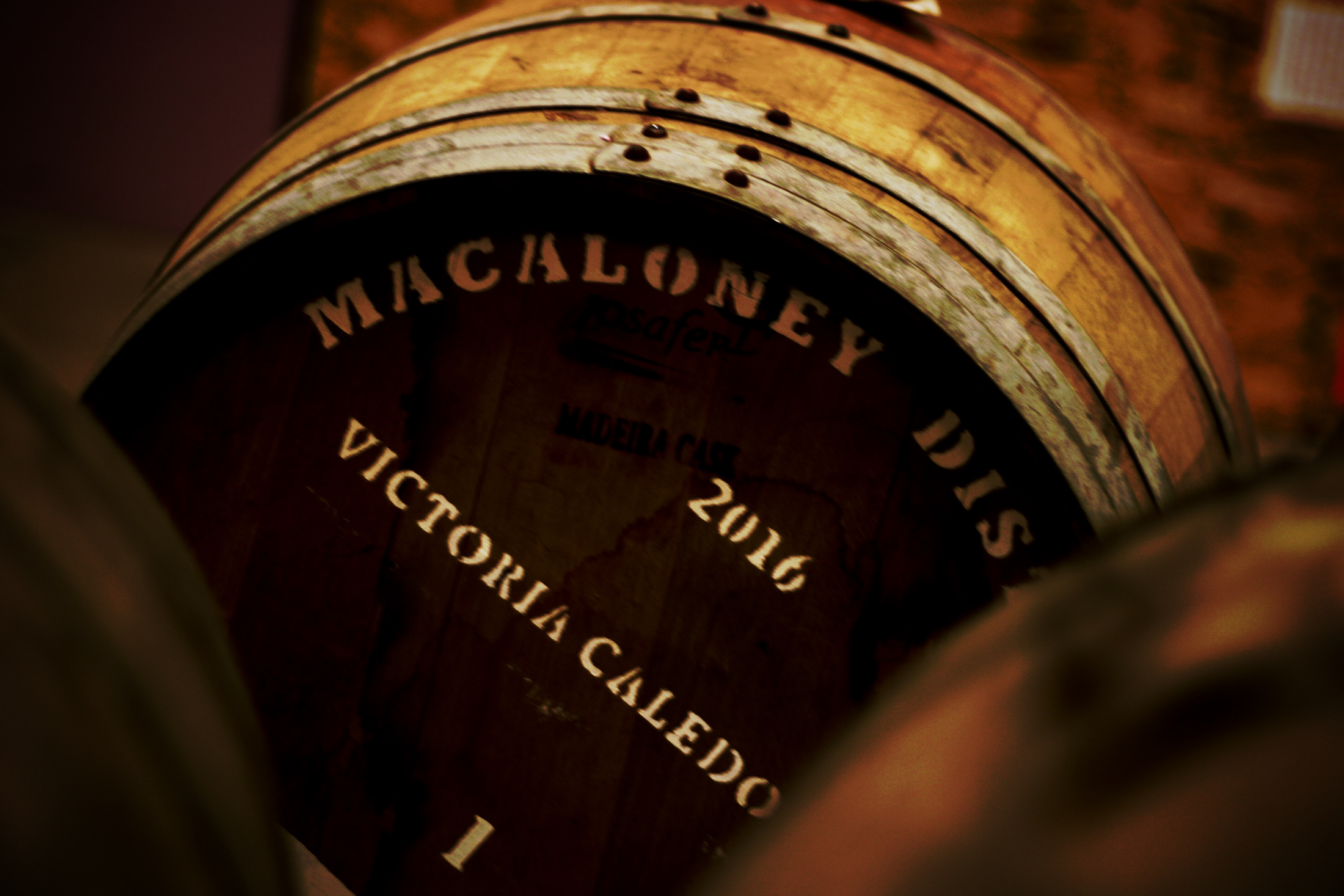 On a recent sunny afternoon, I gathered a few friends at a safe two-metre distance under the fig tree on my back lawn to taste the spirits of Victoria, B.C.’s ambitious Scottish whisky-maker Graeme Macaloney.

Scotch is not, one would usually think, an afternoon drink. The Scottish poet and enthusiastic Scotch drinker Robert Burns suggested it was to be sipped into the wee hours when he wrote that “the cock may craw, the day may daw, and aye we’ll taste the barley bree.” But desperate times call for desperate measures.

Here were the rules. The tasting would be blind; every round would be brought out in identical glasses in a randomly selected order. In fact, nobody except me even knew which whiskies we were tasting.

Second, there would be controls. In addition to the three whiskies supplied by Macaloney’s Victoria Caledonian Distillery, I added a popular inexpensive blended Scotch whisky (The Famous Grouse, $27) and a highly respected single-malt Scotch (Highland Park 12 Year, $62).

In other words, could a whisky from Vancouver Island compete with either an everyday Scotch whisky or an exceptional one?

But before we get to the tasting, there are a few things you should know about Graeme Macaloney and his whisky. 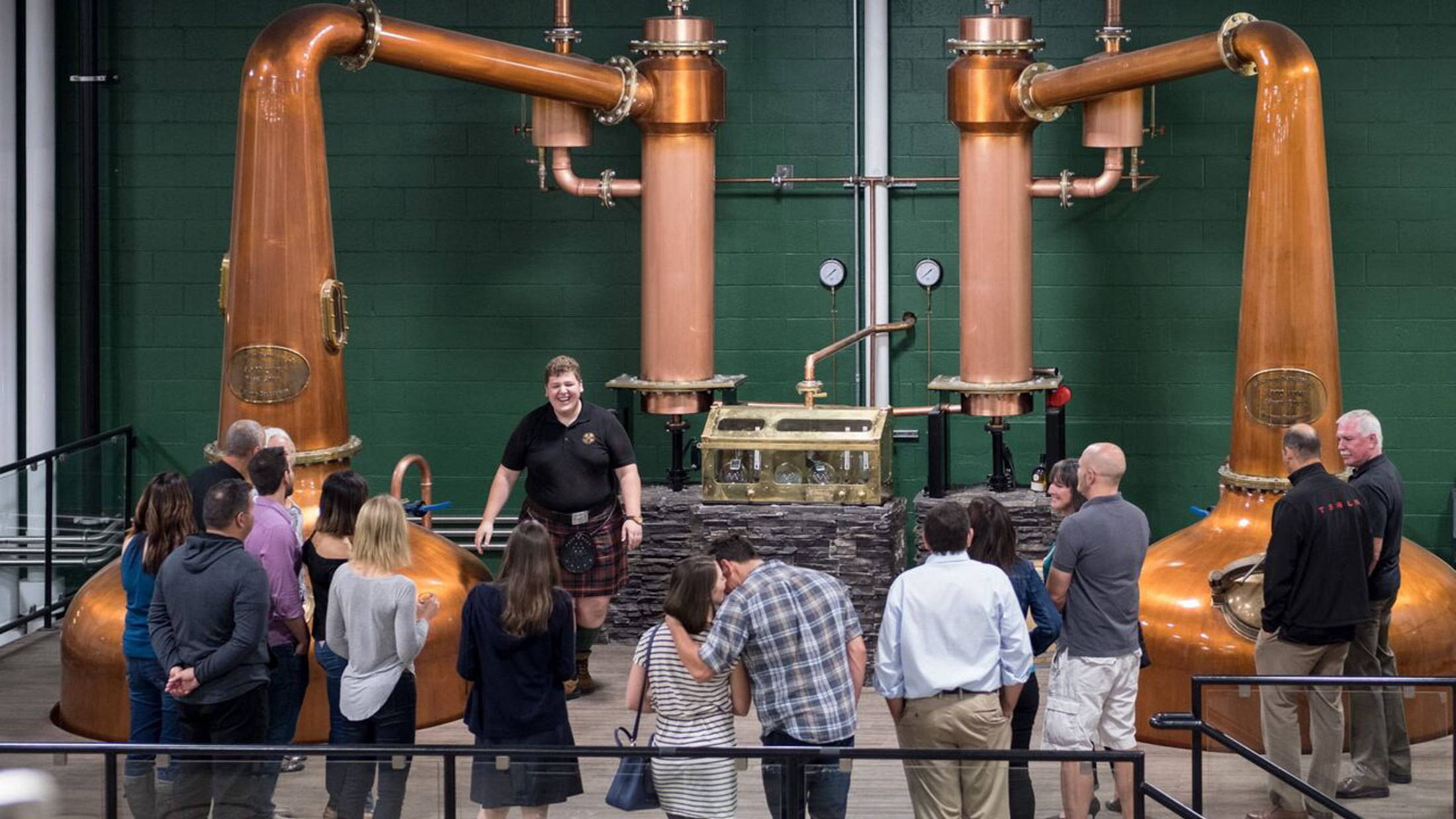 First of all, it’s not, strictly speaking, whisky. By Canadian law, a true whisky must be aged in wood for three years; most well-respected Scotch is aged for at least a decade. The enormous time investment of producing a good whisky is a substantial barrier to a distillery startup such as Caledonian, which was founded only four years ago. Bottled after a little over a year in the cask, the samples Macaloney sent me only qualify as “single malt spirits,” while his first true three-year-old whiskies will be released this fall.

But in the past decade, the world of fine whisky has gone through a shakeup. In 2015, Kavalan, a lesser-known distillery from southern Taiwan, took home the first prize for the world’s best single malt whisky at the prestigious World Whiskies Awards, beating out 16- and 18-year-old competitors, despite being less than five years old. With the right distillation and brewing techniques, Kavalan proved that an extensive aging process might be less necessary than tradition suggested.

It was with this inspiration that Scottish expat Macaloney, with the help of distiller Mike Nicolson and whisky maturation expert Jim Swan (who also consulted for Kavalan before he passed away in 2017), founded Caledonian⁠—with the hope of emulating Kavalan and producing exceptional spirits in an extraordinarily short time. Caledonian’s first spirits were released less than two years after Macaloney distilled his first spirit, winning best new make and young spirit at the World Whiskies Awards in 2019 for his Clearach Single Malt Spirit.

“I really want to show the world that we in Canada can create great Scotch and Irish-style whiskies,” Macaloney says.

He stakes the quality of his whisky on Swan’s fast maturation process, which he says requires careful attention to each step of brewing and distilling to produce a spirit so clean that it requires little time in wood to become smooth and mature.

“There’s no special magic or technology,” he says. “The accumulation of all those best practices gives us a spirit that’s very clean, very smooth, very fruity, and if you put it in world-class wood, then it will mature very quickly.”

In several ways, Caledonian is an experiment in what is possible in the world of West Coast distilling. With hefty 5,500-litre pot stills, Macaloney hopes not just to produce world-class whisky but to make enough to export globally and put Canada on the whisky map for more than just inexpensive rye. He dreams of a Pacific Northwest whisky trail, where tourists will travel up through Oregon and Washington into British Columbia, stopping off at Caledonian for a dram before heading into the whisky lands of the interior.

But all of that depends on one thing: the whisky. 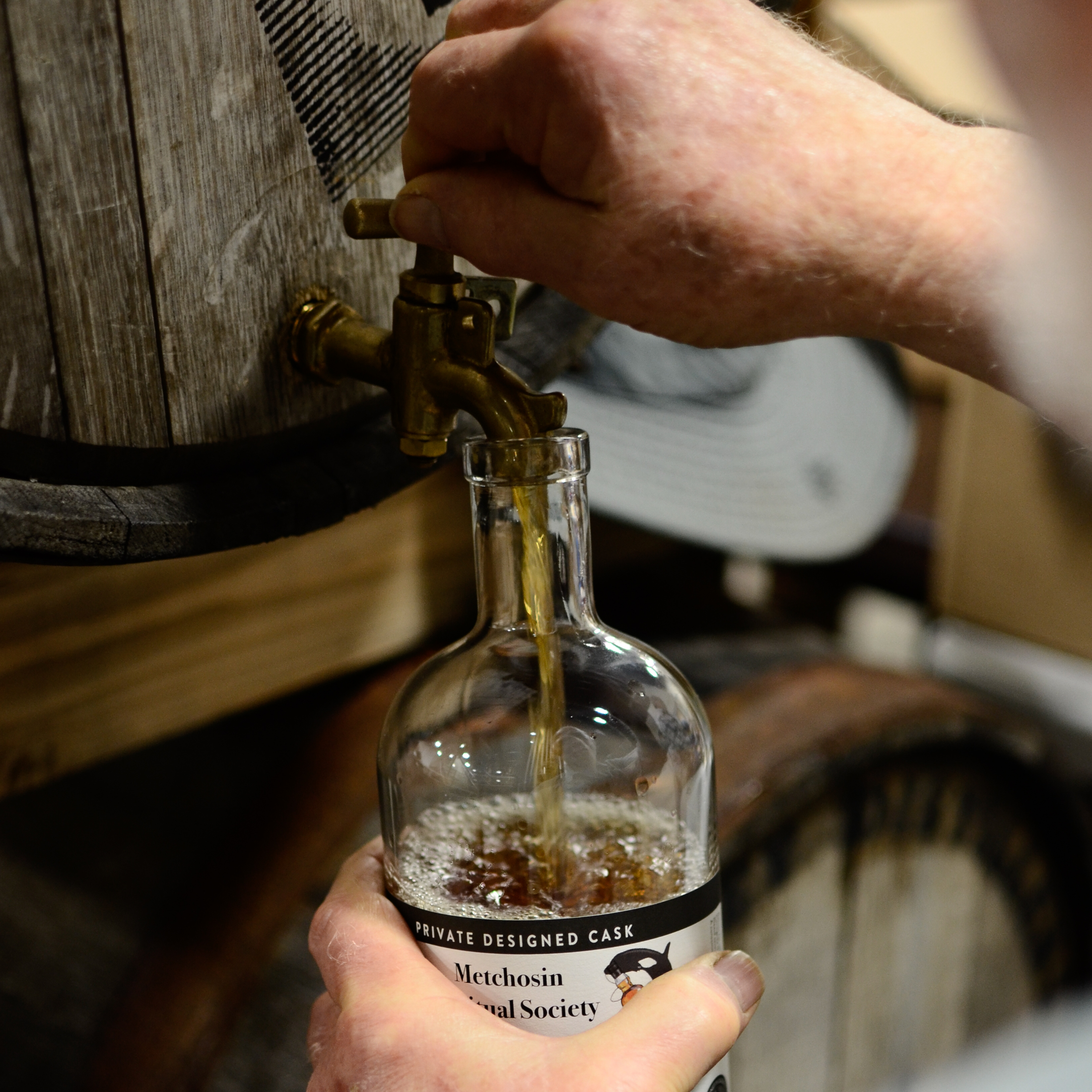 An owner of a Caledonian cask fills a custom-designed bottle. Photo courtesy of Caledonian Distillery.

As luck would have it, the first random pick was the authentic single-malt Scotch. Unsurprisingly, the Highland Park fared very well; five out of six tasters ranked it first out of all five whiskies, describing it as exceptionally smooth with notes of apple and licorice and an immediate subtle sweetness and light peat smoke. Our most experienced taster, a local brewmaster, was so confident in this whisky’s superiority that he identified it as the authentic Scotch before even tasting the other four, and he was right.

This may be one of the most popular blended whiskies in Scotland, but its performance here shows that you get what you pay for. Our tasters described the Famous Grouse as mild and fruity, with notes of chocolate and marzipan, but also distinctly sharp and thin-flavoured. “If I were making whisky, I would send this one along with mine to show how good mine was in comparison,” one of our tasters said, and was also essentially correct.

Macaloney’s Oaken Poitín is his take on Irish pot-still whisky (poitín, pronounced poe-teen, is the Irish word for moonshine). He describes Irish whiskey as a gentler and more accessible drink for those still working their way up to bold Scotch. Our blind tasters agreed, enjoying the sweet, cake-like flavours of vanilla, jam, cherries, and dark chocolate, though finding the boozy aroma less refined than the previous two Scotches. They ranked this spirit the best out of Caledonian’s samples.

Macaloney explained with pride his search for a source of peat to smoke the Canadian barley for this whisky spirit. He found it on the Olympic Peninsula, another part, he points out, of the former British trading region of New Caledonia. The Olympic peat imparts a heavy, salty smoke that our tasters perceived immediately with a collective “whoa” as they brought their noses to the glass. While some described the smokiness as a classic Scotch whisky flavour with a pleasing scent of arbutus trees, most found it overpowering and mouth-coatingly harsh. This was Caledonian’s only spirit to rank below the Famous Grouse.

The unpeated version of the fourth pick, this spirit was the simplest expression of Macaloney’s Scottish-style whisky⁠—mac na braiche (pronounced mac-na-brah-hey) means “son of malt” in Gaelic, referring to a young whisky spirit. Our tasters found it clean and sophisticated, with notes of burnt chocolate, lemon, and butterscotch, and our brewmaster guessed that it might be the blended Scotch. This spirit narrowly fell short of tying with the Oaken Poitín for second place. 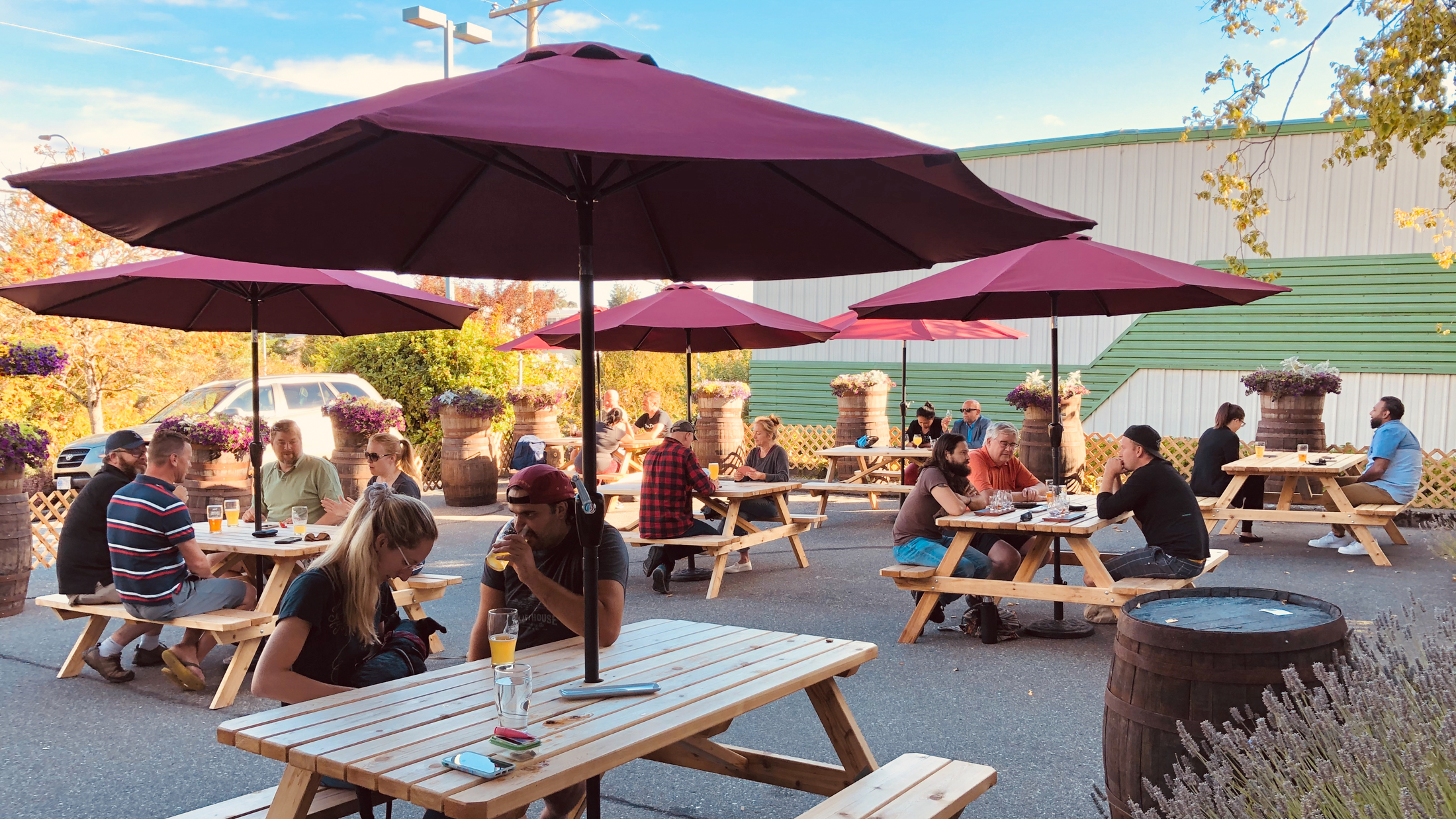 The patio at the shared Caledonian Distillery and Twa Dogs Brewery.

If you were looking for an upset of Bottle Shock proportions, this wasn’t it. It turns out that a 12-year-old Scotch from one of the greatest distilleries in Scotland is hard to beat. But Macaloney’s young spirits are highly promising—competing with an authentic blended Scotch with a spirit less than two years old is nothing to sniff at⁠—and we will look on with interest as Caledonian’s spirits hit the three- and five-year marks, and beyond.

Caledonian’s Glenloy and Invermallie whiskies will be available online and throughout B.C. this fall. Caledonian Distillery continues to offer socially distanced distillery tours and tastings in Victoria.