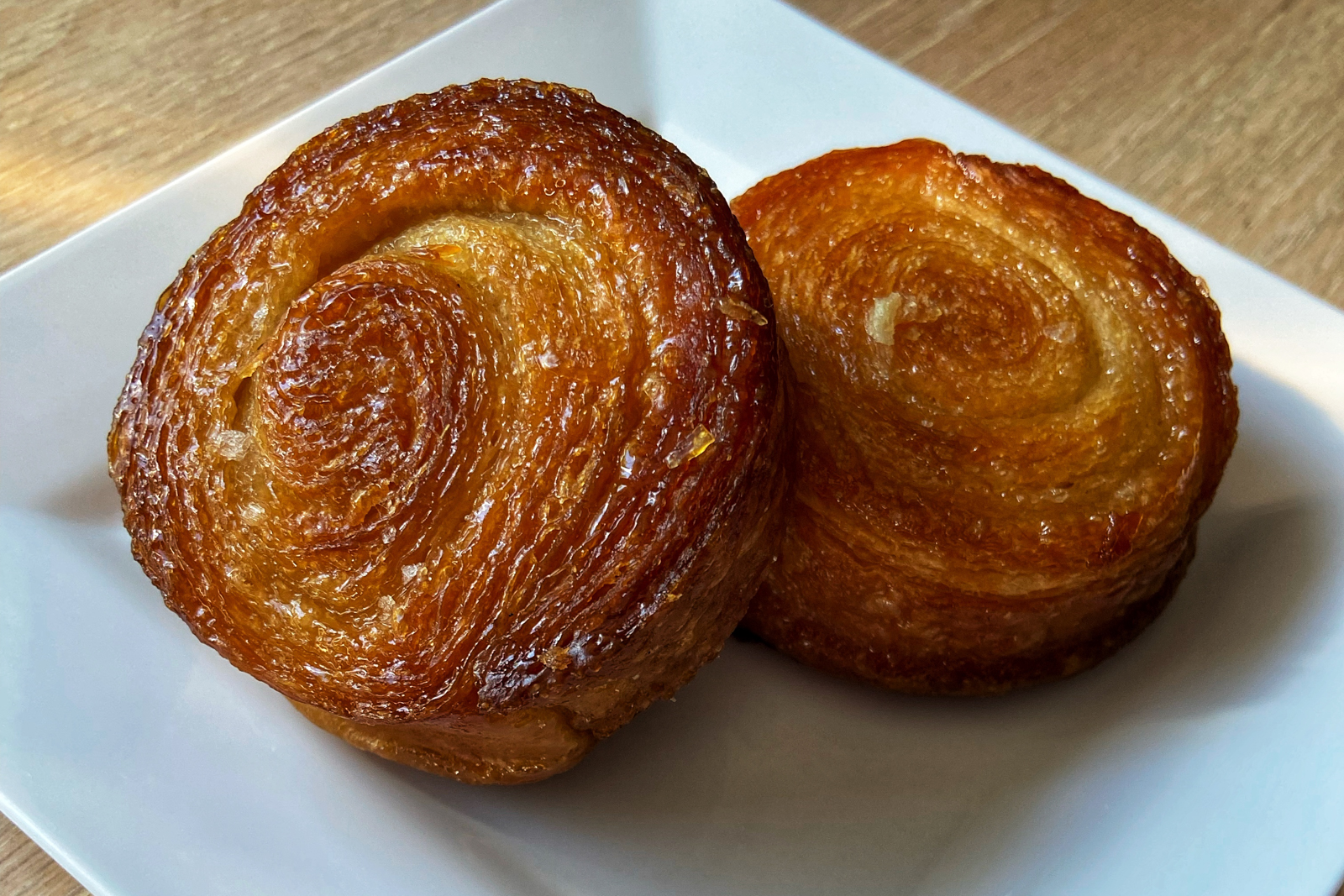 “It’s pretty rare⁠—even early on in your career⁠—that you’ll come across something that you’ve never heard of or never seen. The name itself was just so intriguing. Like how do you say this? How do you even pronounce that?”

Andrew Han, owner and executive chef of Kouign Café in the heart of Chinatown, remembers his first encounter with kouign-amann (pronounced kween-uh-mahn), a classic French pastry made with a simple combination of bread dough, butter, and sugar.

Wandering the streets of Montreal, he searched for the pastry, which he had seen only a few times on the internet. Eventually, he came across a storefront with the very name for which he had been searching, Au Kouign-Amann. “They serve a much more traditional style,” he says. “It’s like about the size of a pancake, a little bit more height.”

Now popular among chefs, bakers, and foodies alike, and found on the menus of numerous bakeries and cafés in Vancouver, kouign-amann originates in the French region of Brittany. It’s a region famous for its butter, says Betty Hung, co-owner and head pastry chef at Beaucoup Bakery near Granville Island⁠—where you’ll also find the pastry⁠. Details of its origin vary, but it was likely invented by a 19th century baker in the Breton town of Douarnenez. He rolled his dough out into sheets, piled on some butter and sugar, roughly folded it over and over, and baked it. The result was a flaky, rich, sweet, buttery, caramelized delicacy with an appropriate name⁠—kouign and amann are the Breton words for butter and cake. 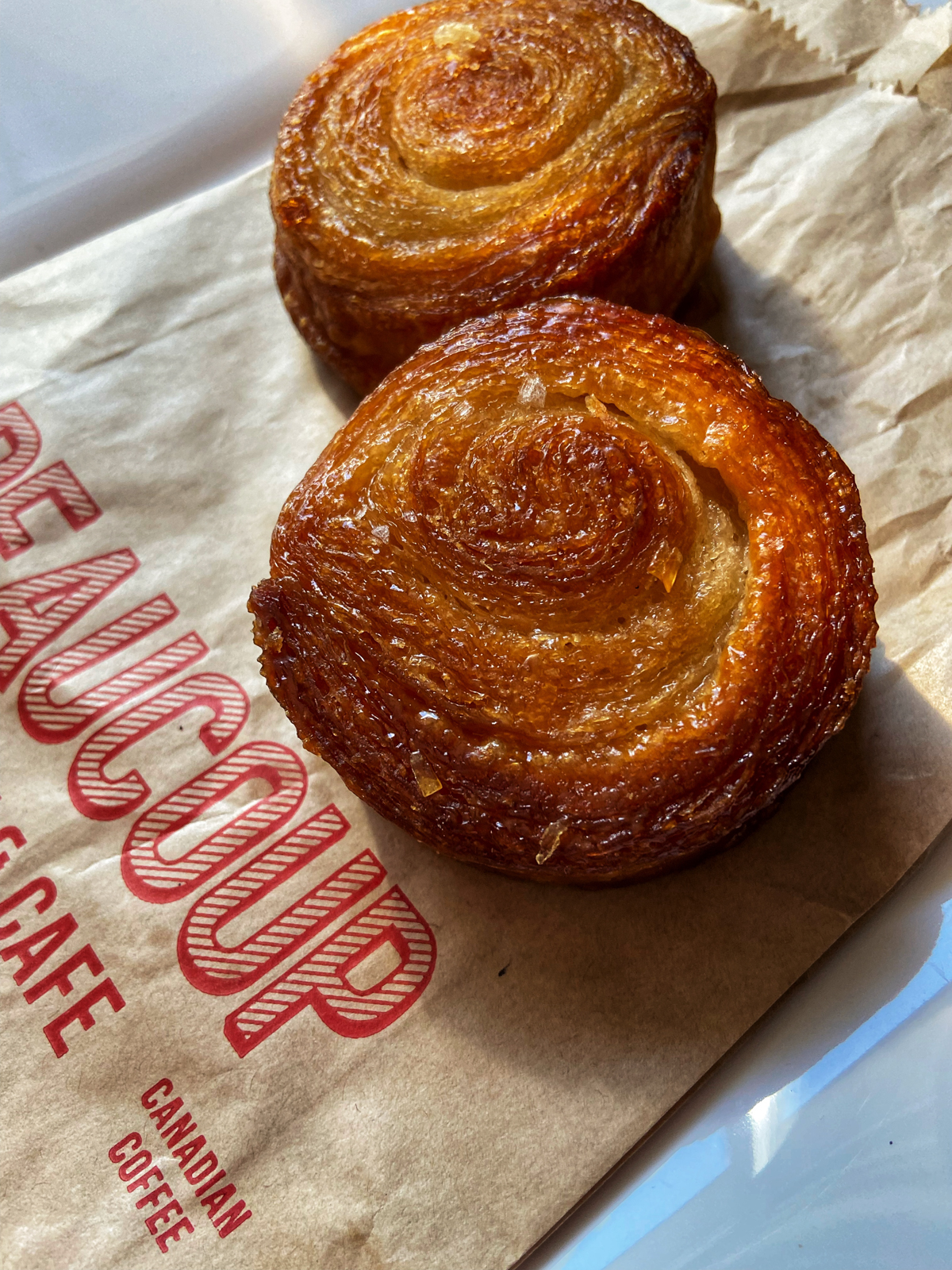 Han could not agree more. He says that’s one of the reasons kouign-amann has been his favourite pastry since he first discovered it. “It requires so much care to make it right,” he says. The process of laminating⁠—folding butter into the dough to create alternating layers⁠—creates a flaky end product he says “is just so rewarding and satisfying because you can see the fruits of not just your labour but also your experience that you’ve gained over the years.” 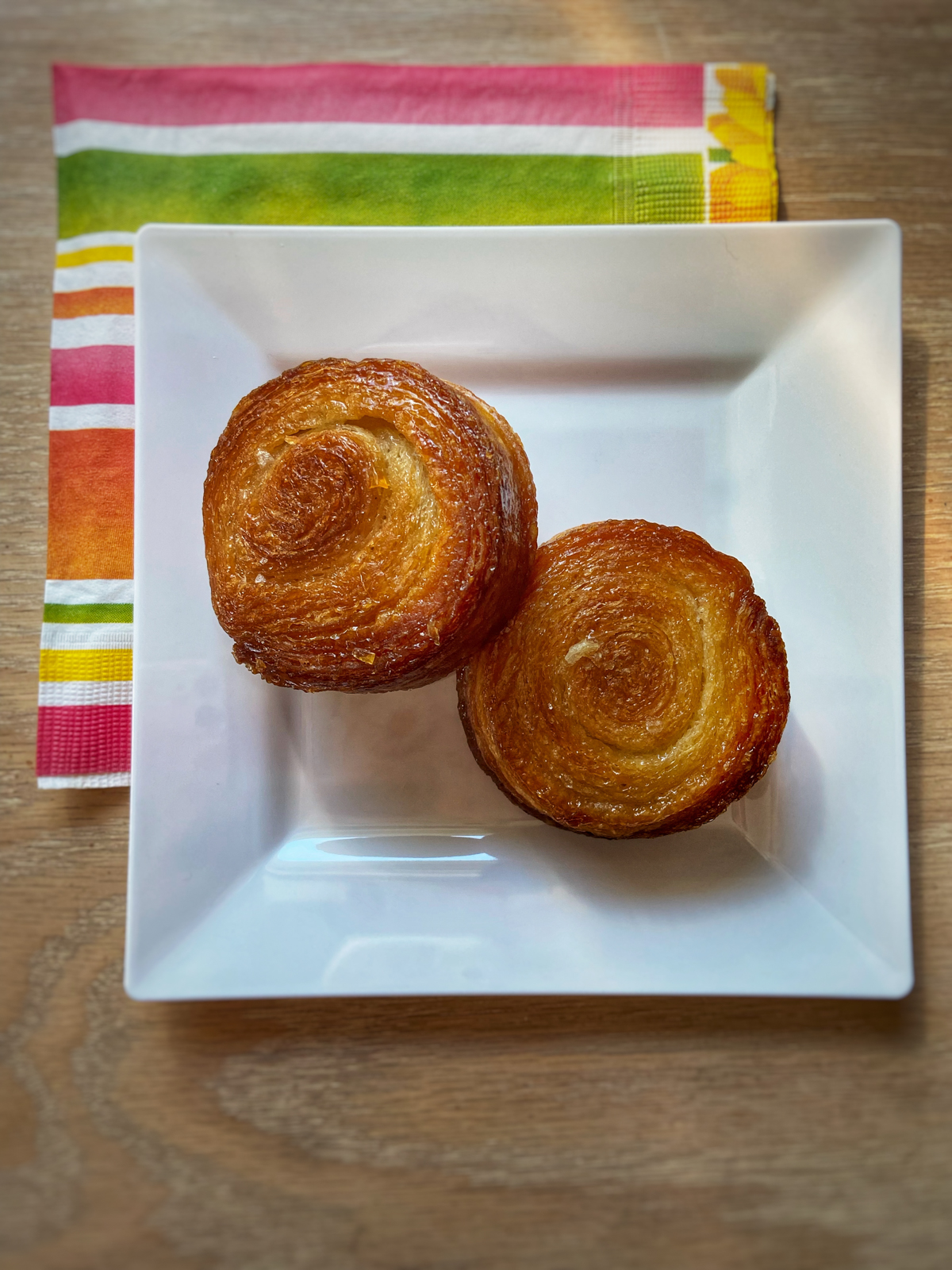 Han fell in love with the simplicity and sophistication of kouign-amann. It was apparent to him, as he first ate the dessert in the iconic Montreal café, that he was discovering something special: “a blank canvas of a pastry,” he says.

“There is definitely room for creativity when it comes to kouign-amann,” Betty Hung says. She explains that traditionally in France (and, Han notes, in Montreal), kouign-amann is still baked as a cake, then sold by the slice. Beaucoup Bakery sticks to the traditional recipe for kouign-amann, but Hung serves individual portions, which she says allows for a “more caramelized surface area.” Beaucoup Bakery also has a fresh seasonal pastry sold in the summer: a kouign-amann base with pastry cream, jam, fresh strawberries, and mochi pieces on top.

Hung has seen other pastry chefs use spiced or brown sugar in their own versions of kouign-amann. “They’re all very delicious, no matter which way you make it, so I think that’s what makes kouign-amann special,” she says.

Andrew Han also uses kouign-amann as a simple base upon which to express his creativity and “make it even more exciting than what I originally found it to be.” Kouign Café’s kouign-amann is made with a coconut butter mochi heart, caramelized sugar crust, chrysanthemum honey glaze, toasted sesame seeds, and gold flakes. “It’s got the same kind of flakiness of a croissant and a pillowy, buttery interior,” he explains.

“It is a hard pastry to find,” he says. When he travels, he makes it a mission to find a bakery that has kouign-amann on its menu. The romance, fantasy and magic surrounding the pastry’s origin contributed to the idea behind Han’s own Chinatown shop, whose name was inspired by his favourite pastry.