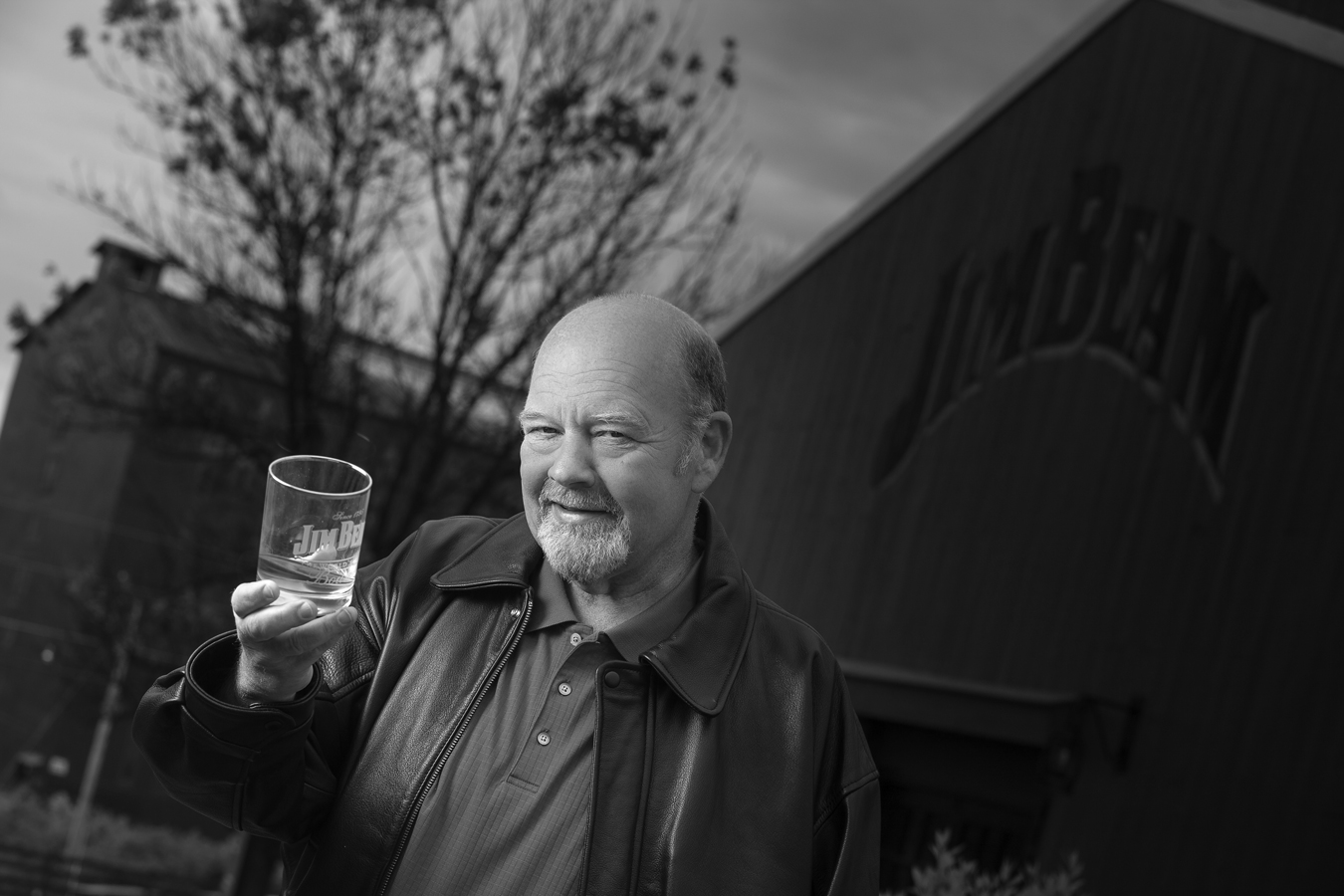 Frederick Booker Noe III is the seventh generation master distiller at Jim Beam. We sit down with him at Jim Beam’s American Stillhouse to talk about bourbon making, the growing consumer base, drinking in a dry state, and more.

Tell us about the ultra-premium bourbons you produce.

Certain products like the Booker’s, bottled straight out of the barrel, that’s not for everybody. A purist loves it, but somebody who’s more into Red Stag would grimace. There’s different strokes for different folks. And to keep yourself so narrow minded—“this is the only way bourbon should be”—then there’s no innovations coming out at all. In the 80s, dad [Booker Noe] was developing Small Batch and that was premium, Elmer T. Lee up at Blanton’s was developing Single Barrel, Jimmy Russell at Wild Turkey started doing Russell Reserve and Super Premium. Those were really the first innovations in the bourbon industry.

Now, when you look at the infusions, like the Red Stag with black cherry, the honey, that’s bringing more people to the bourbon category who are not purists but may develop a taste for bourbon. People say, “why do you do that?!” Well, you don’t have to drink it, I mean just because you like it that way.

Are you reaching a new consumer base? Is a younger generation learning about your whisky?

I think the consumer base is growing. There are a lot more people today looking for bourbon than were 10 years ago, a lot of demographics from all over. Young people! Back when I was a kid, it was just old guys, your dad, your granddad—they drank bourbon, and nobody else. They drank it with a little water, and that was about it. Some of them make a Manhattan but there wasn’t a lot of cocktails when I was a kid. Maybe a Whiskey Sour and that was just sweet and sour, kinda rough. You go out now and watch the bartender build it, it’s almost as much fun as drinking the drink.

People want to do these bourbon dinners, too. A good chef can pair each course with a different drink or different bourbon and really use it in the cooking and not just dump a big shot over ribs. Basil Hayden is a very light bourbon, you see fish being cooked with that. It’s cool to see things get paired. Back in the old days, it’d be like a bourbon cigar dinner, and that was just, you get a glass of bourbon and a cigar.

Are the regulations, or laws, pertaining to bourbon production a hindrance to you at all?

The laws regulating bourbon tie our hands pretty tight. It has to be 51 per cent corn, we’ve got to use a new barrel, y’know your distillation proofs, all the rules and the standards of identity for bourbon—there’s not a whole lot you can do to change it. You can throw your own spin on it, you can play with the mash bill a little bit, but really, distillation proofs, the strength that it comes off the still, where you age the barrels, the strength that you bottle it at—that’s our variables. So we’re all kind of doing the same thing.

I look at it like chefs cooking in restaurants. Say we’re all cooking a rib eye steak. Actually we all think ours is the best, but it’s not to say yours isn’t very good because everyone started with a rib eye steak. Unless you did something pretty crazy, it’s going to be pretty good and you put your own spin to it. A lot of the [bourbon] recipes have been passed down from generation to generation, so it’s kind of family heirlooms—it’s been passed down from father to son.

Is a bottle of Beam or Knob Creek the same as it was 10 years ago?

It’s as close as we can make it. Inconsistency was always one of dad’s biggest pet peeves. He wanted every bottle to be exactly the same every time you tasted it. So he beat that into all our production people. But as time has worn on, people are looking for inconsistencies, like in Single Barrel, the Booker’s. They like not knowing exactly what it’s going to taste like ‘till you pull out that cork, put it in a glass and taste it. (Or drink it out of the bottle if you want!) That’s the thing, the purists, they love the inconsistency.

But there are different variations. We started doing the single barrel Knob Creek, it’s different in the fact that it’s one barrel bottled from within the Knob Creek barrels that we laid down. And we do not chill filter it and we bottle it at a flat 60 per cent and 120 proof. But the regular Knob Creek it gets chill filtered and we bottle it at 50 per cent and 100 proof and it’s a mingling of barrels put together for consistency.

Are the “dry” counties a decreasing factor for you?

The state is three quarters dry; there are 120 counties and only 30 are wet. You are right on the belt buckle of the Bible Belt, and that keeps it dry. Now the young people have a little more foresight; they want to drink. They don’t want to drive several miles or deal with a bootlegger. They are starting to vote; that makes a difference. For years, young people didn’t vote, so the older people kept it dry. ‘Cause if you look, a lot of your polling places are churches. So the preacher’s standing right there when you go in, and you’re a member of the church. So it’s just a little bit of pressure, and they preach like hell before.

As the older ones get old and pass away, the support for keeping the country dry kinda goes away. And the young people, hey, it’s freedom of choice. Just because there’s a liquor store doesn’t mean you have to go in and buy liquor. Times are changing. But it took a real long time. Shit, it took my entire lifetime!

Governor [Steve] Beshear had enough foresight to use alcohol—bourbon—as a hook to bring folks here for our tourism business. It was very insightful on his part and he’s been a big supporter of bourbon. Silver Dollar [in Louisville] and all those bars that are backdoor, all the bars we used to go to, now you can’t even get in them! People don’t just come to Louisville for the derby now, they come all year.

Is the aging process a challenge you can continue to meet?

All we can do is build more warehouses and lay more barrels down. If there was a way to make it today and sell it tomorrow, we could do something, but that’s the thing about bourbon, it’s aged for a period of time. Jim Beam White Label, for example, it’s at least four years in that barrel. You start talking about these premium marks, it’s six years and up. And there’s no way to accelerate that, no way to make it taste like nine years old in four years. Somebody can figure that out and then we can all be grinning but, nah, there’s nothing we can do to accelerate aging.

Is there an ideal amount of time in barrel, and is there such a thing as too much age?

I think you can get too much age on a barrel if you don’t watch it, kinda like adding too much salt or pepper to something you’re cooking. It gets better, better, better, then it’s too much. I think if you get barrels much over 15 years old, it gets so woody. But there are people out there who want extra extra aged stuff, but I think a lot of that comes from there not being a lot of it. So it’s one of those things, everyone wants what they can’t have. I guess that’s human nature.

And when you taste it, after you get some of it, I’ve heard people say, “Well I got a bottle of that 24 year old, it just, it’s not that good, it’s awful woody”. I says, “Really! I wonder why”. You multiply 24 times four, there wasn’t much left in that barrel after you open it up. It’s so damn woody, but it’s the idea of having it on your backbar and people can see it. You don’t see people who drink that religiously.

What are the essential effects of aging in barrels?

Are there new ways of meeting the challenge of aging process, such as shortening barrel times?

Something we’re doing is we take the age off, then you can mingle different ages together and nobody really knows how old. It’s got to be at least four years old. That does loosen it up a little bit. You need to not be focusing on the number on the bottle, and be focusing on what’s inside.