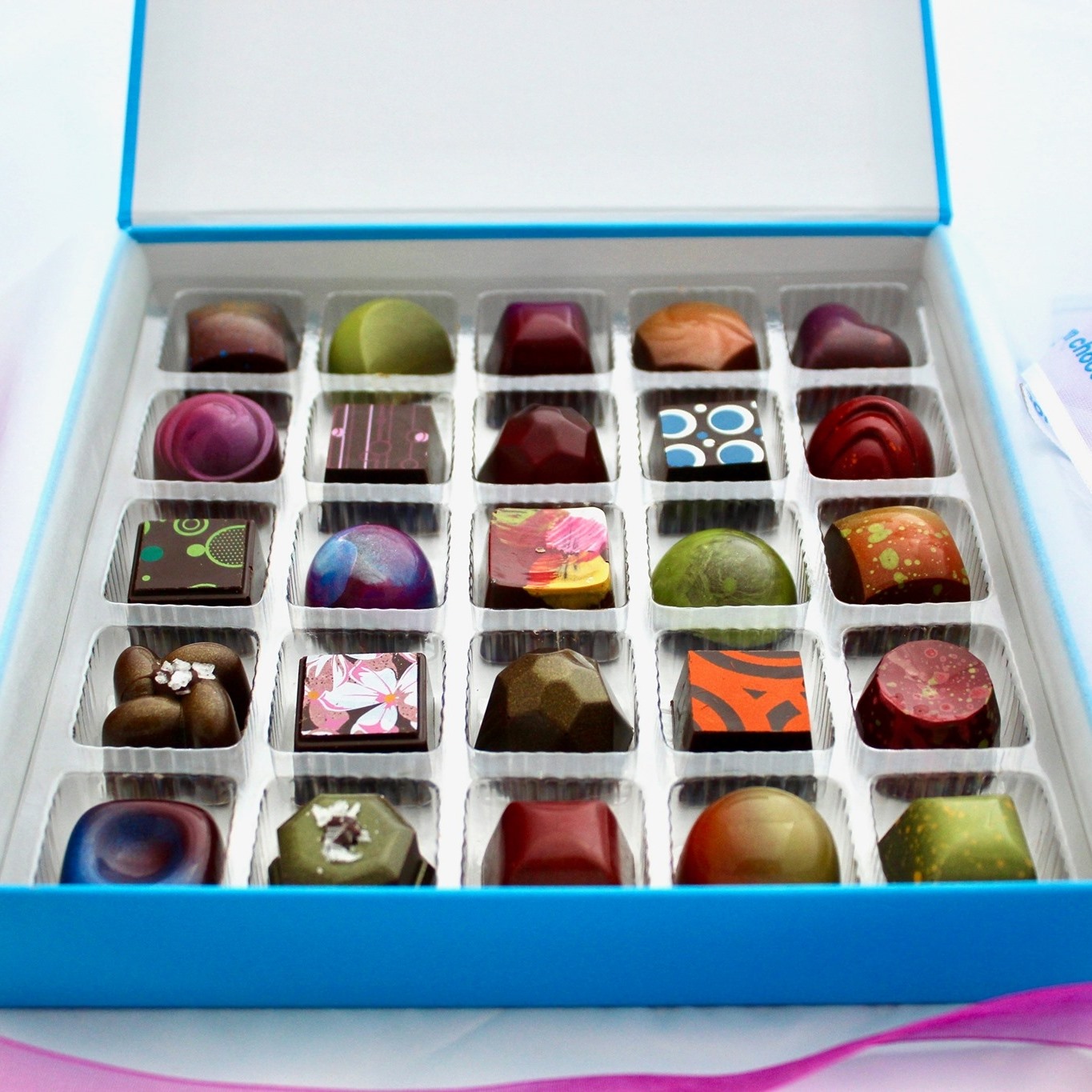 Glenn Knowles passes me a teaspoon of pale-yellow ganache. I taste it, letting the flavours slowly unfold. Notes of juniper and a trace of lime spread over my palate. I’m transported to my neighbourhood bistro, sipping a gin and tonic at the bar while the room hums with conversation.

Knowles holds up a bottle of tonic water syrup, describing how he had to reduce it for 2.5 hours to reach the right consistency to add to white chocolate ganache. It was worth it to capture the essence of the classic cocktail.

Although many of his customers like the tried-and-true, such as salted caramel, Knowles likes to push the boundaries of flavour to challenge himself. His experiments are conducted in his kitchen at the back of Gem Chocolates in Kerrisdale. The neatly organized kitchen contains all the tools and ingredients for his craft. On one shelf, I spy bottles of spirits and Maldon sea salt; nearby a sheet pan rack is stacked with filled chocolate molds and my attention is drawn to a tempering machine swirling with melted Valrhona dark chocolate.

As a child, I obsessively read Roald Dahl’s Charlie and the Chocolate Factory, dreaming of a visit to the magical factory to learn about Willy Wonka’s zany, yet exacting production process. I ask Knowles if Gem was a lifelong dream, but he shakes his head. He didn’t grow up with visions of chocolate and oompa loompas. In 2009, after a career running operations at the Canadian Venture Exchange, he yearned for a drastic change. “I wanted something more soul fulfilling and entrepreneurial,” he says.

Since he liked baking at home, Knowles enrolled in a bread and pastry arts diploma at Northwest Culinary Academy. To prepare, he completed a six-week on-line course on chocolate-making, and found the techniques suited his personality. “If you’re really attentive to temperature and atmospheric changes and then not rushing—just being very patient with chocolate—it will perform for you,” he says. His early attempts succeeded, with friends clamouring to know where he bought the unique chocolates. Realizing he was onto something, he withdrew before the diploma program started and launched a chocolate business instead. 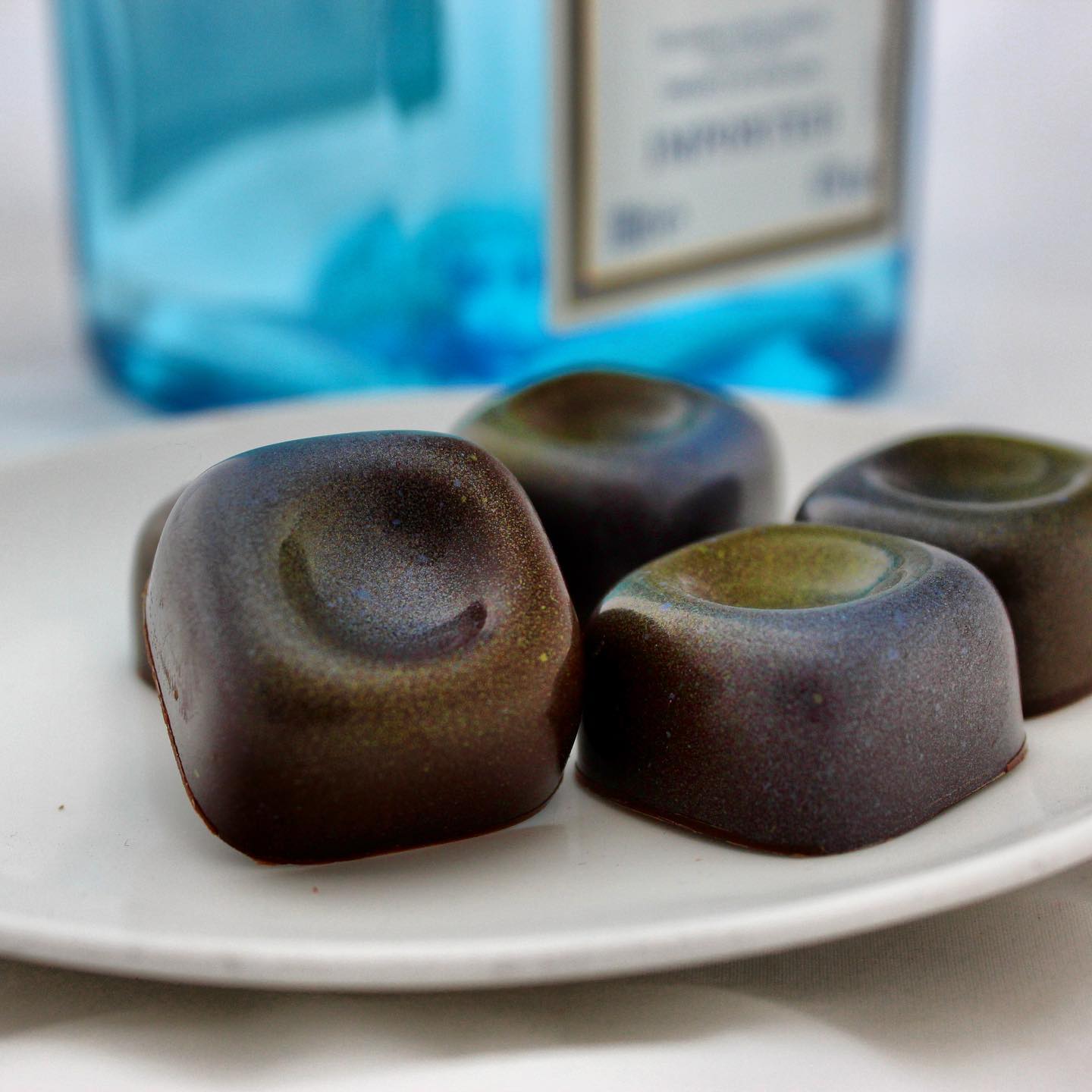 Knowles opened his boutique in 2011, specializing in molded chocolates. He entered competitions, such as those run by the International Chocolate Salon, winning awards for creations ranging from brown butter and thyme to rosemary olive oil with sea salt. For competitions he picked flavours that would have broad appeal among judges, but he also has made small batches of more adventurous flavours for his customers, such as caramelized Vidalia onion and sundried tomato pesto.

Knowles relies on serendipity for his flavour inspiration. For a lemon with toasted coconut chocolate, he was inspired by a lemon meringue gelato he sells at his shop. “I looked at it and immediately thought: coconut and lemon. That’s what it screamed to me,” he says. He was traveling around Scandinavia when liquorice candy made him think of a raspberry pairing. Another time, a customer, whose fiancée had become unexpectedly pregnant, wanted a special chocolate for their wedding. Knowles came up with a lime caramel, and playfully added a hint of chili to represent the surprise of their first child. Knowles now sells the chocolate at the store, affectionately named JB after his customer.

If he’s curious about a flavour combination, Knowles will sometimes taste an approximation. To demonstrate, he takes a piece of chocolate and then pipes on a dab of black sesame caramel. I give it a try, considering the slightly bitter dark chocolate alongside the savoury sweet caramel and the nutty black sesame. Knowles decided on the flavour when he saw black sesame seeds on sale at the grocer.

When asked what he wouldn’t put in a chocolate, he replies, “meats or fish.” While he hasn’t had many flops, he regrets succumbing to requests for a red bean chocolate on Lunar New Year. “It didn’t work. There’s not enough flavour to come through,” he says. He seeks bold ingredients that complement and are not overpowered by the profile of the chocolate. Milk chocolate pairs with ingredients that go well with its nutty, caramel notes while dark chocolate needs flavours that marry its intense earthy or floral flavours.

Once he’s settled on a particular chocolate, Knowles embarks on a multi-day process. After he chooses a shape, he fastidiously buffs his molds, spreading residual cocoa butter from the last batch evenly onto their surfaces. This cocoa butter then is transferred to the new batch, giving the chocolates a wonderful shine. The next step is creating the outer design. Whereas Knowles initially only used transfer sheets, he now employs a variety of techniques, such as painting and spraying, with coloured cocoa butters and luster dusts. “The design speaks to the flavour so there is a tie in with colour to the natural colour of the fruit or the nut, or there is a connection to the palate,” he says. For his raspberry liquorice chocolate, he uses a prism shape so that the final product looks like a raspberry, and sprays it red with a splatter of black to represent the liquorice. 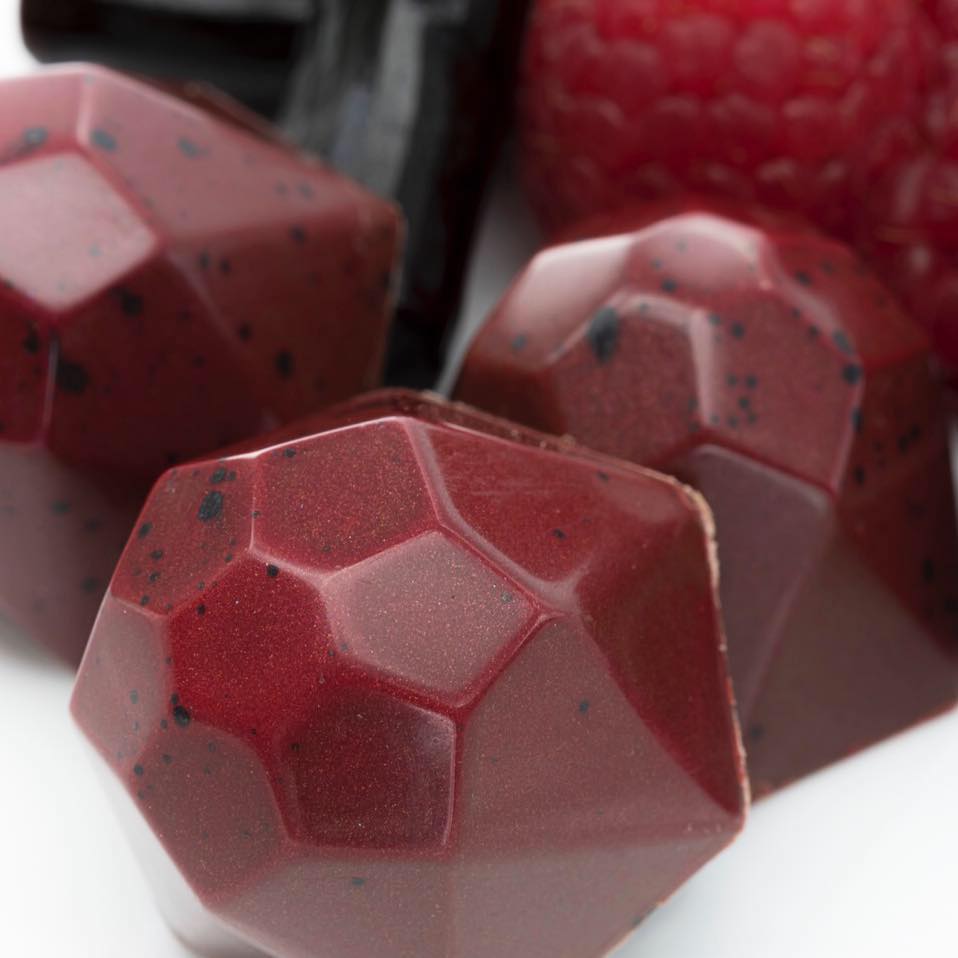 Inspired by Scandinavian liquorice, the raspberry and liquorice chocolate is made using a prism mould to mimic the fruit.

After the coloured designs rest in the molds overnight, Knowles uses a couple coats of chocolate to make the shell, and then after another resting period, he’ll add the caramel or ganache. He shows me trays of molds waiting for the final stage: capping. The tempering machine has brought the chocolate to a stable temperature that will ensure the perfect texture, shine, and snap to the finished chocolate. Knowles briefly warms the filling with a heat gun so that it will adhere, and then runs the molds under a stream of chocolate. He scrapes off the excess, and after cooling, the molded chocolate is done.

I place one chocolate in the palm of my hand and marvel at the complexity that went into making this small treat⁠—a delicate shell formed from exactly the right combination of time, temperature and technique, wrapped around ganache or caramel flavoured with dulce de leche, Manuka honey and cherry, or ghost pepper. Knowles delights in the endless play and patience required to make chocolate. “I like that it has a mind of its own,” he says.