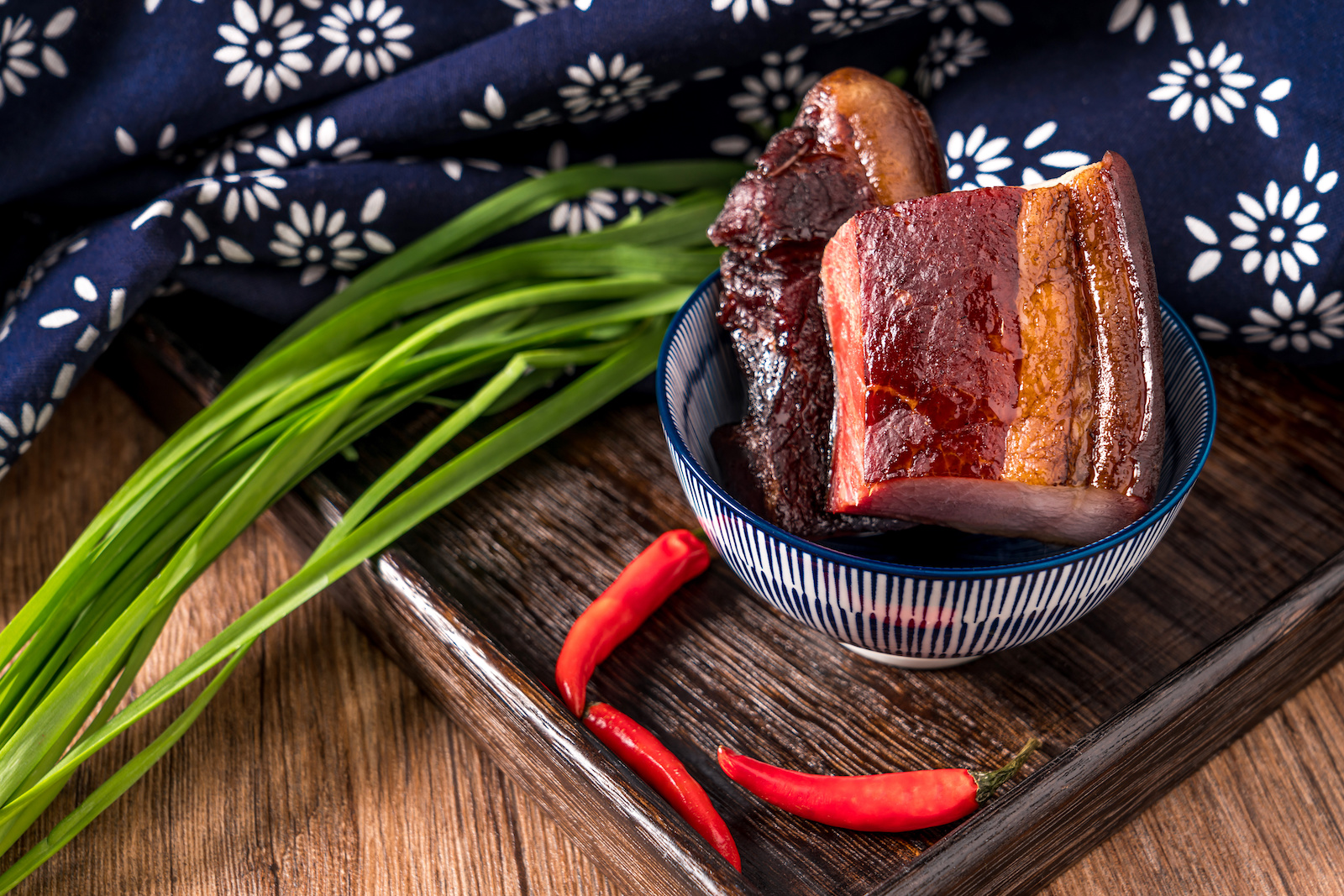 Less than a week before the Lunar New Year, T&T Supermarket in Chinatown is festooned with lanterns and signs wishing health and happiness. Palpable excitement hangs in the air, as shoppers fill their baskets with sesame almond cookies and dried sea cucumber. In one aisle, customers examine boxes of jerky, some spicy and others maple-syrup sweet. In the West, jerky may be associated with rough-and-ready cowboy fare, but in Chinese tradition around the new year, preserved meats have a special place as a gift, delicacy, and symbol of plenty.

A few blocks down East Pender Street, Dollar Meat Store is equally bustling. Lap cheong (Chinese sausage) hangs from racks high on the walls, as well as hams, and cured duck and pork belly. Staff use long hooks to lower twined bundles of meat after customers point to what they want. Open coolers are packed with more preserved meat, such as dried chicken legs, salted pork, and cured sausage made from pork and chicken liver. At the counter, butchers chop barbecued meat while others wrap up raw cuts from the display cases.

Owner Joey Wong says preserved meats, such as cured sausage and duck, are popular not only for the Lunar New Year table but also as presents to loved ones. He explains that because meat in China was historically a luxury, people looked forward to receiving it on special occasions. However, fresh meat makes an awkward gift. “In the olden days, in the village areas, when you would gift somebody a live chicken or a piece of meat, they would have to consume it right away. If they had a lot of gifts like that, they wouldn’t be able to eat it in time.” As a result, preserved meat was the superior option at a time before refrigeration.

When my grandmother (Poh-poh) was growing up in Meixian, China, in the early 20th century, her family salted, smoked, and sun-dried meat to prevent it from going bad. While preserving meat was common across regions of China, including Sichuan and Hunan provinces, my grandmother’s people, the Hakka, developed methods to make meat and vegetables last during periods of migration.

When my grandmother immigrated to South Africa, she brought these preserving techniques to her new home. The Chinese community was small, and the preserved meat she was familiar with was nowhere to be found. Ever resourceful, my grandmother got to work. My mother remembers Poh-poh salting strips of pork belly and hanging them to dry on a trellis outside, along with salted and seasoned ground pork stuffed in casings she bought at the local butcher. She used netting to protect the drying meat from flies. 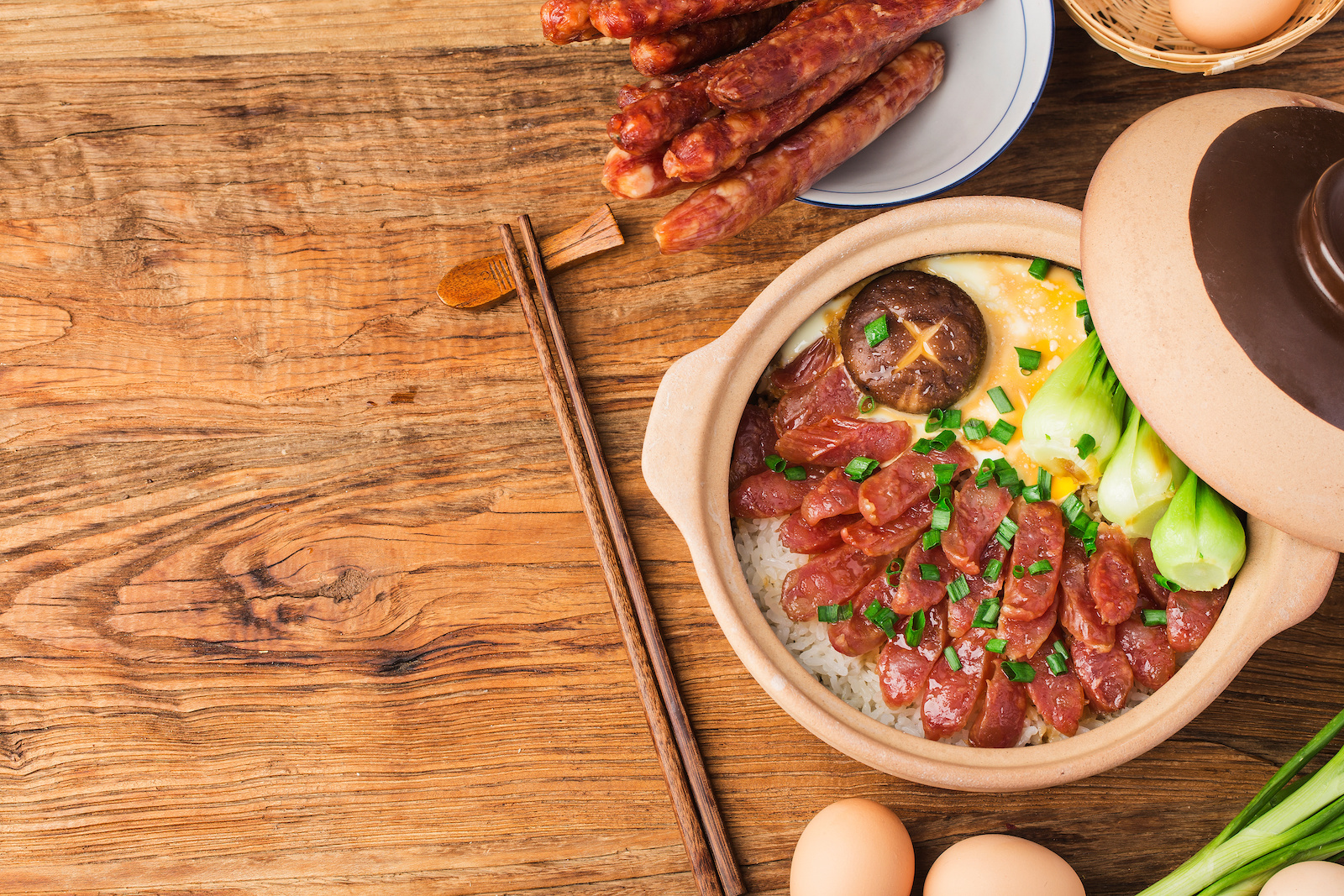 In 1967, my mother’s family moved to Vancouver, where my grandmother could buy a variety of Asian preserved meats instead of making her own. Over time, many butchers have localized and modernized preserving techniques beyond what Poh-poh learned as a child. Even so, these shops remain rooted in tradition.

Some dried-meat traditions look entirely different from those of my own family, such as the ones at BKH Jerky on Fraser Street, which specializes in a Singaporean-style jerky called bak kwa. The jerky originates from China’s Fujian province, introduced by migrants to southeast Asia hundreds of years ago. Singaporeans and Malaysians embraced the dried meat, making it sweeter, as well as grilling it to deepen the flavour.

BKH owner Scott Lim took over the business from his father, William, who learned the recipe from a master jerky maker, Teo Ah Thin of the original Bee Kim Heng, a long-running hawker stall in Singapore. William fell in love with the jerky and wanted to share it with customers in Vancouver after friends and family raved about it.

One popular form of bak kwa is traditionally made from ground meat, which is flattened on bamboo mats into thin sheets, dried, and then grilled over charcoal to give it a smoky flavour. Scott says his father tweaked the process for a more uniform jerky. BHK sources pork shoulder and inside round beef from Chilliwack, and slices it thinly before marinating it with ingredients such as sugar and fish sauce. The sliced meat produces a leaner texture compared to the fatty ground meat often used in bak kwa. 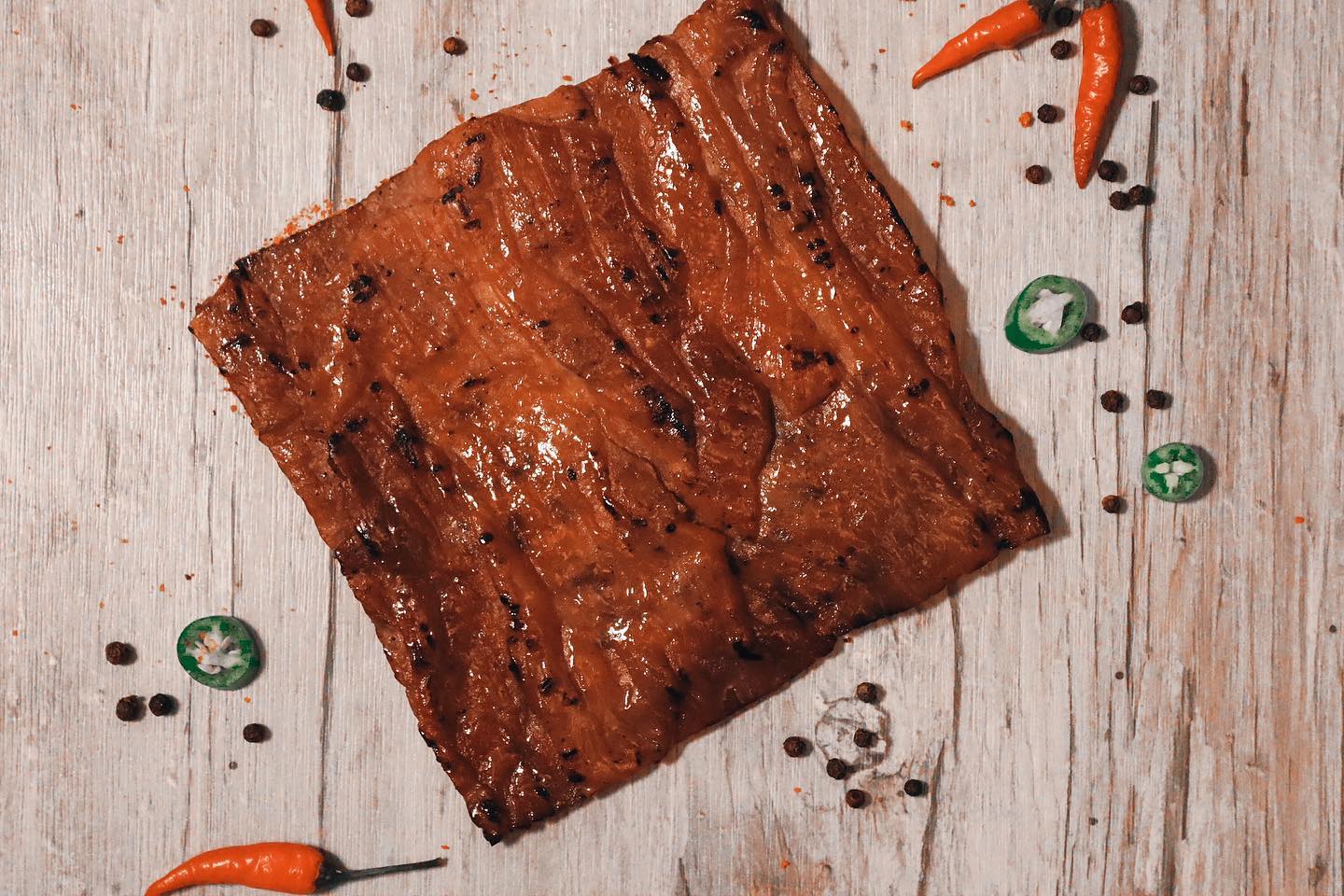 Scott finds charcoal grilling messy and bamboo mats difficult to keep clean. Instead, at BKH, the meat is laid on stainless steel baking sheets and then slow-cooked in the oven for five hours. The final stage is grilling the sheets of meat on a gas barbecue to caramelize the sugars and make the meat juicier. From start to finish, the jerky takes roughly 30 hours to make. “You think it’s straightforward but it’s actually a very long procedure,” Scott says. “It takes a lot of time.”

BKH produces just enough jerky daily to sell out. When customers place an order for their spicy or curry options, cayenne pepper or curry powder is sprinkled on the jerky before the meat is vacuum-sealed.

The result is a sweet and savoury snack, with slight heat. While meat is no longer preserved out of necessity, its old associations of luxury and special occasions remain. Scott says Singaporeans often give bak kwa as a present or serve it as a treat for Lunar New Year: “People come over to the house, and you pull the jerky out and serve it to them, just like moon cake.”

As Lunar New Year approaches, BKH gets busy as customers stock up on jerky for their family and friends. Scott says his proudest moment was appearing on Dragons’ Den in 2011 and getting his moreish jerky validated by the panel, as well as sharing it beyond the Singaporean community. He says, “Even after 35 years, once I start eating it, I can’t stop eating it.”