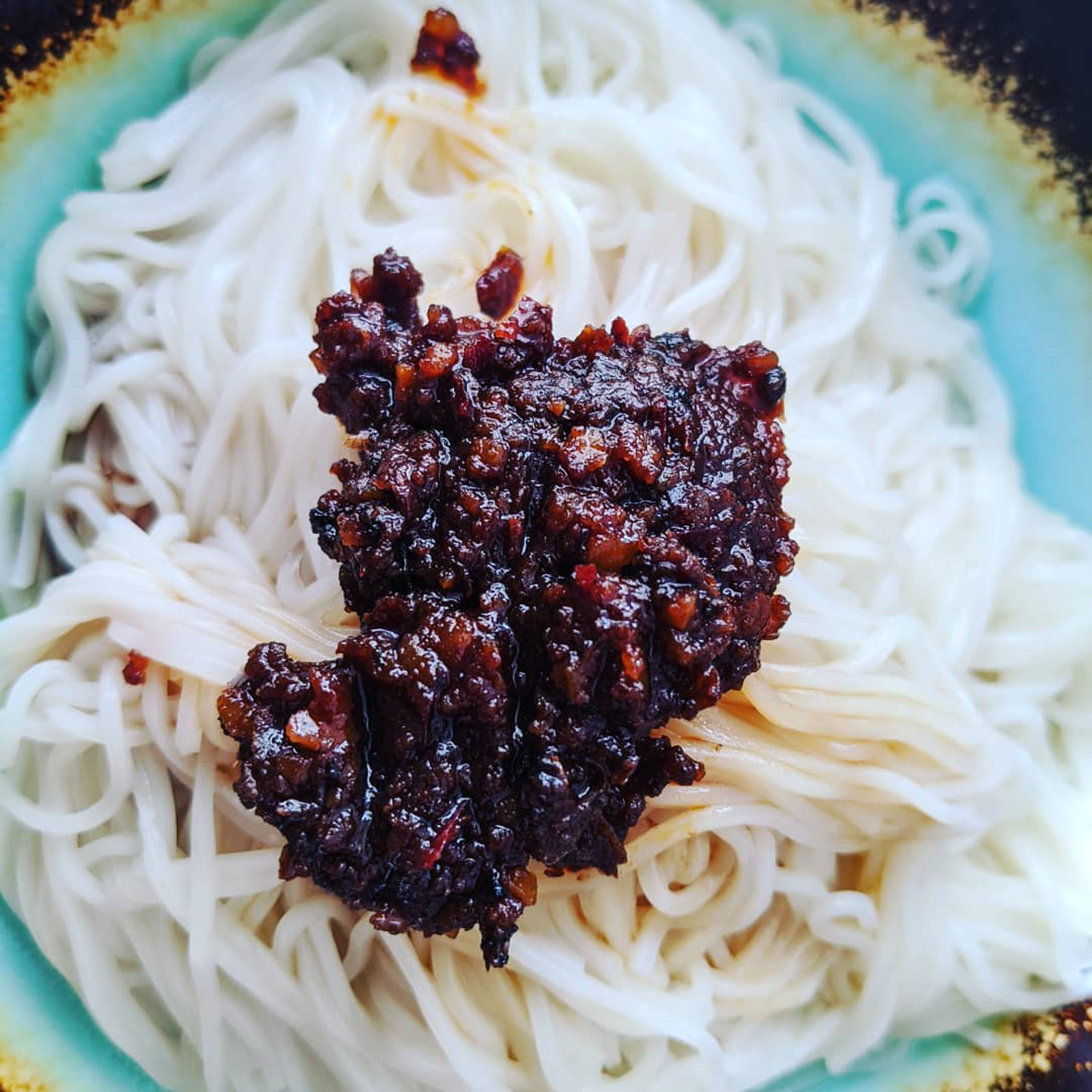 It would be wrong to say that chili oil is having a moment.

Yes, chili oil recipes are everywhere recently—from The New York Times and Bon Appétit to foodie blog sites. And it’s true that chili oil brands are jumping from Asian grocers to the shelves of mainstream Canadian grocery stores and corner markets. But while chili oils are hailed as the (literally) hot new food, a flavour taking the world by storm, it’s hard to say that chili oil is having a moment when it is already the favourite condiment of the world’s most populous nation.

It might be better to say that the rest of the world is finally catching up.

Chili oil⁠—also called chili crisp, chili sauce, hong you, or taberu rayu⁠—is really a whole category of condiments originating from East Asian cuisines. The sauce always includes an oil infused with chili, and some versions⁠—such as the simple golden oil speckled with red flakes set out as a table condiment at wonton houses—stop there. More robust chili oils include infused aromatics such as garlic, shallots, sesame, herbs, and spices, and a rich undertone of umami from soy sauce, fermented black soybeans, miso, mushrooms, or simple MSG. Texture varies from a light, drizzled finishing oil to a chunky, crunchy relish.

Whatever the style, chili oils are remarkable for their versatility. With a deliciously complex balance of heat, fat, savouriness, pungency, and salt, the condiment can instantly transform the most bland and uninspired bowl of rice, noodles, or vegetables into a fully flavourful meal.

As home to some of the best Asian food in North America, Vancouver is a great place to take a tour of chili oil.

You might start by visiting T&T Supermarket or any small Chinese grocer to pick up a jar of Laoganma, almost certainly the best-selling chili oil on Earth. Founded by a single mother from the poor, mountainous Chinese province of Guizhou, the brand now pumps out over a million jars of its chili sauces every day, including a simple chili oil, a hearty chili and black bean sauce, and fancy variations containing peanuts, radish, and even fried tofu cubes. Traditionalists complain that Laoganma (which means “old godmother” and features an iconic picture of its founder on the label) is commercialized and flavoured with artificial MSG, but you can’t call yourself a chili oil aficionado without tasting a jar (or 10)⁠—and the supposed dangers of MSG have been unfairly overstated anyway.

For a more local experience, look for jars of house chili oil sold by Chinese restaurants, such as Max Noodle House in Richmond or trendy Main Street eatery Old Bird, which sells a robust sauce made with shitake mushroom, fermented black bean, and tongue-tingling Sichuan pepper. The 50-year-old Vancouver mainstay Hon’s Wonton House will fill up a whopping 16-ounce takeout container with a clear, light chili oil perfect for drizzling on noodles and dumplings.

At the opposite end of the spectrum from Hon’s lightly flavoured oil is the rich, complex gan guo liao or “dry pot seasoning” sold out of Richmond’s Shun Xin Restaurant. Danni Liu’s family made a name for themselves in Richmond’s Chinese food scene with their spicy Sichuanese crab and seafood, flavoured with a carefully guarded chili sauce recipe. As her parents look toward retirement, Liu⁠ is preserving their culinary legacy by selling their chili sauce as a product for home cooks. 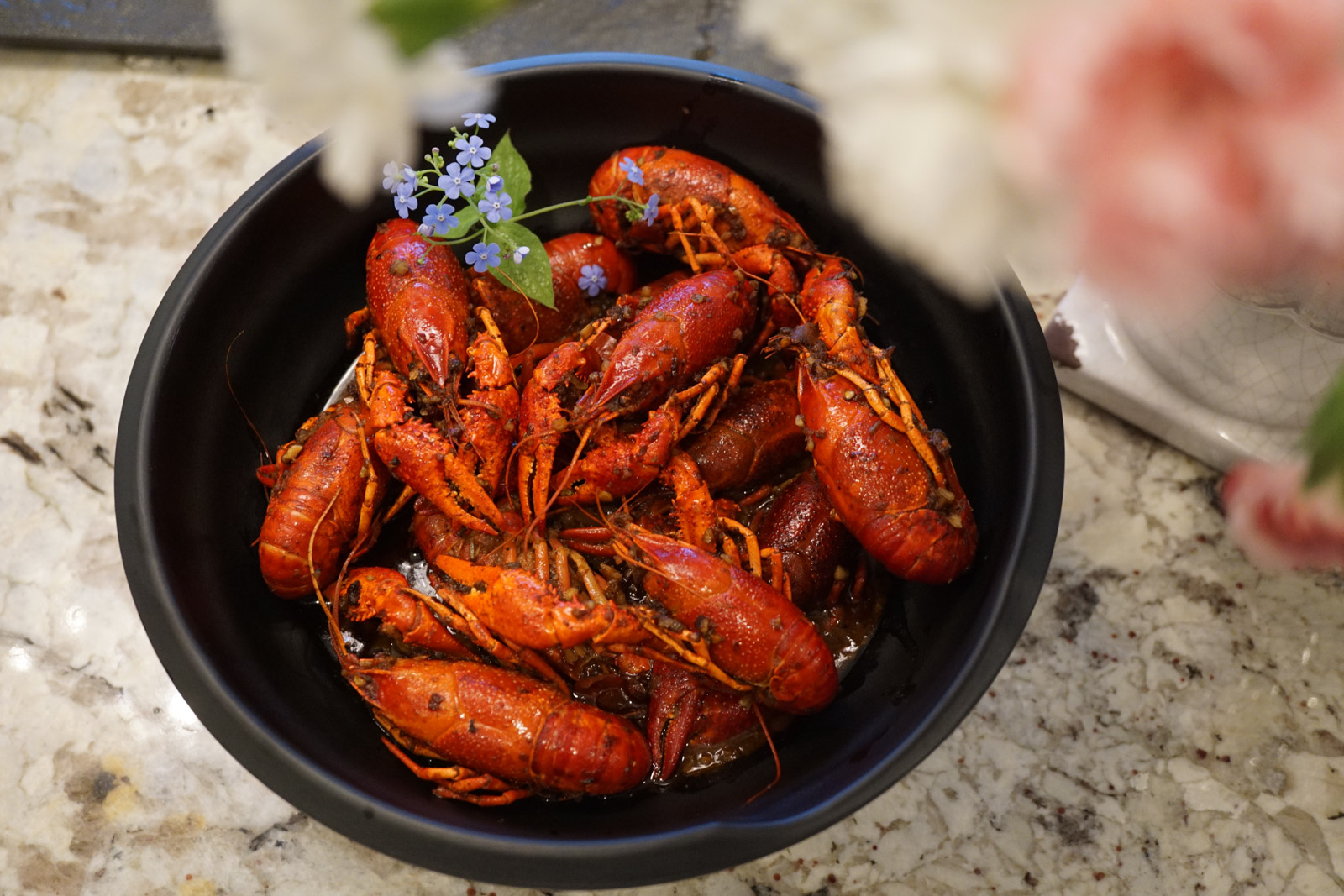 Unlike some other chili sauces that are used as condiments, Liu’s family’s recipe, Lan’s Crunchy Chili, is meant to be added in the final moments of a stir-fry, bathing seafood, meat, or vegetables in a fragrant sauce containing lantern chilis and 20 varieties of Chinese herbs and medicinal botanicals. That being said, there are no rules; Liu says her non-Chinese boyfriend spreads the sauce on bread. “It just transforms any dish into Sichuan flavour,” she says. “Putting it on spaghetti is a real brain twister.”

Chili oils are often described as “addictive,” and none more so than the creative Japanese-style chili oil Okazu made by Ontario brand Abokichi. Fumi Tsukamoto and her Canadian business and life partner Jess Mantell, started out selling onigiri at Toronto farmer’s markets before discovering the miso chili oil they used as flavouring was by far their most popular product. In 2017, they doubled down on their chili oil, and Okazu took off⁠—you’ll now find it in dozens of stores around Vancouver including IGA and Gourmet Warehouse. 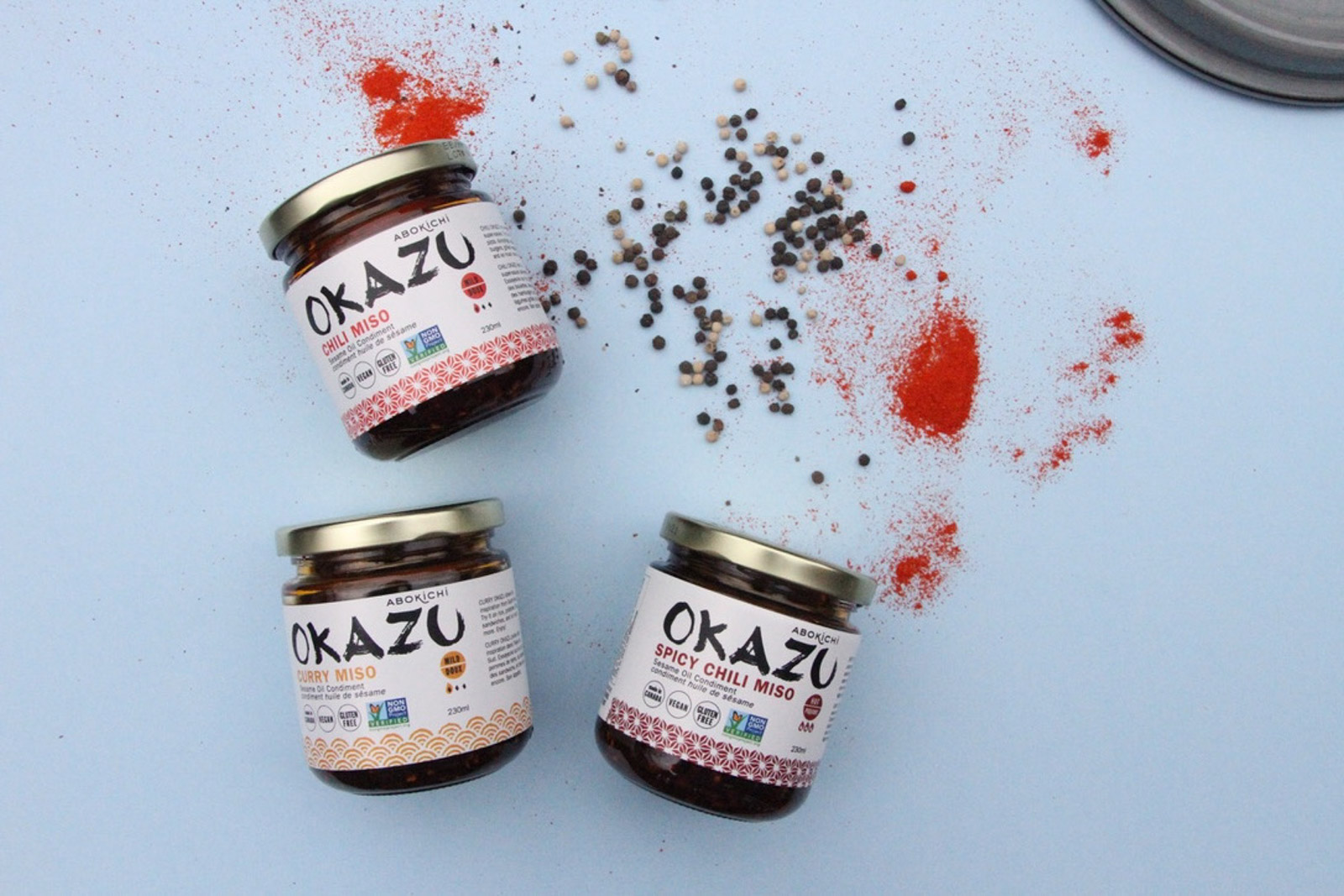 While Okazu is inspired by Japanese taberu rayu, miso is not traditionally used in chili oil in Japan. Tsukamoto wanted an organic, vegetarian source of umami for her sauce, and miso⁠—which she loves⁠—was most readily available. “It’s really a combination of immigrant life and the limitations of the Canadian market,” she says. The resulting smooth, balanced, slightly sweet chili oil is powerfully moreish, and Okazu fans heap it on rice, noodles, scrambled eggs, pasta, and even macaroni and cheese. Abokichi sells jars by the 12-pack for a reason.

Another creative take on Japanese chili oil comes from Saltspring Island, where Aki and Miki Kikuchi of Salt Spring Gaia Foods sell a Japanese-style sauce inspired by the cuisine of Japan’s Ishigaki Island. Aki, a chef, has also added his own Canadian twist on the condiment with leeks and olive oil for a greener, smoother flavour. If you can’t make it to the farmer’s market on Saltspring, you can pick up the sauce at Greens Organic and Natural Market on West Broadway. 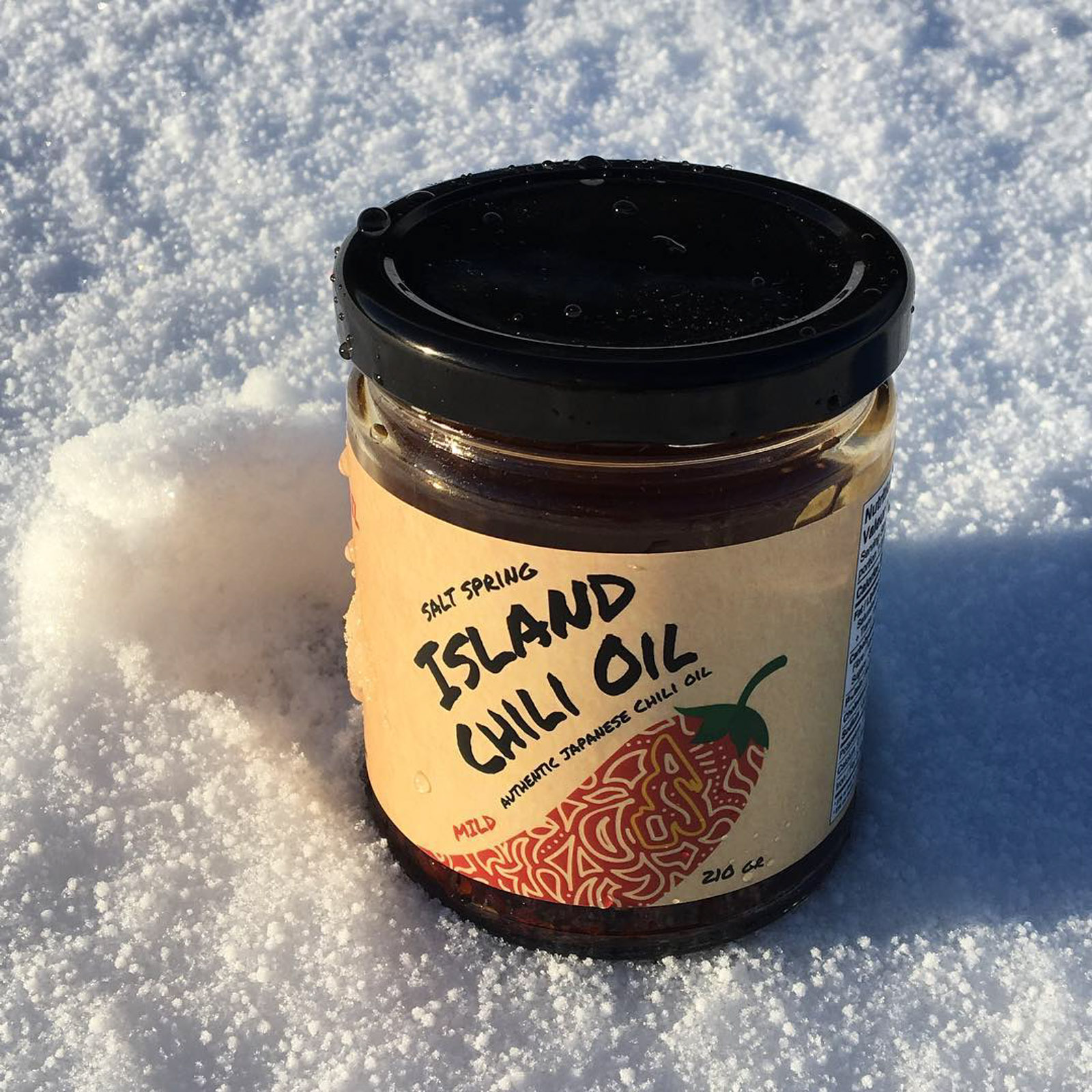 Chili oil and beyond

At the cutting edge of Canadian chili oil innovation, you’ll find Ajax Wong, a 24-year-old Vancouver service industry worker who started up his own chili oil brand, Big Mom, during the pandemic. His spicy, smoky chili oil recipe was passed down through his family from the Cantonese city of Chiuchow, but Wong dreams of adding a B.C. twist: he’s seeking approval to sell his chili oil infused with cannabis. The product’s name in Chinese, Daima, is a pun on the Chinese word for the plant. 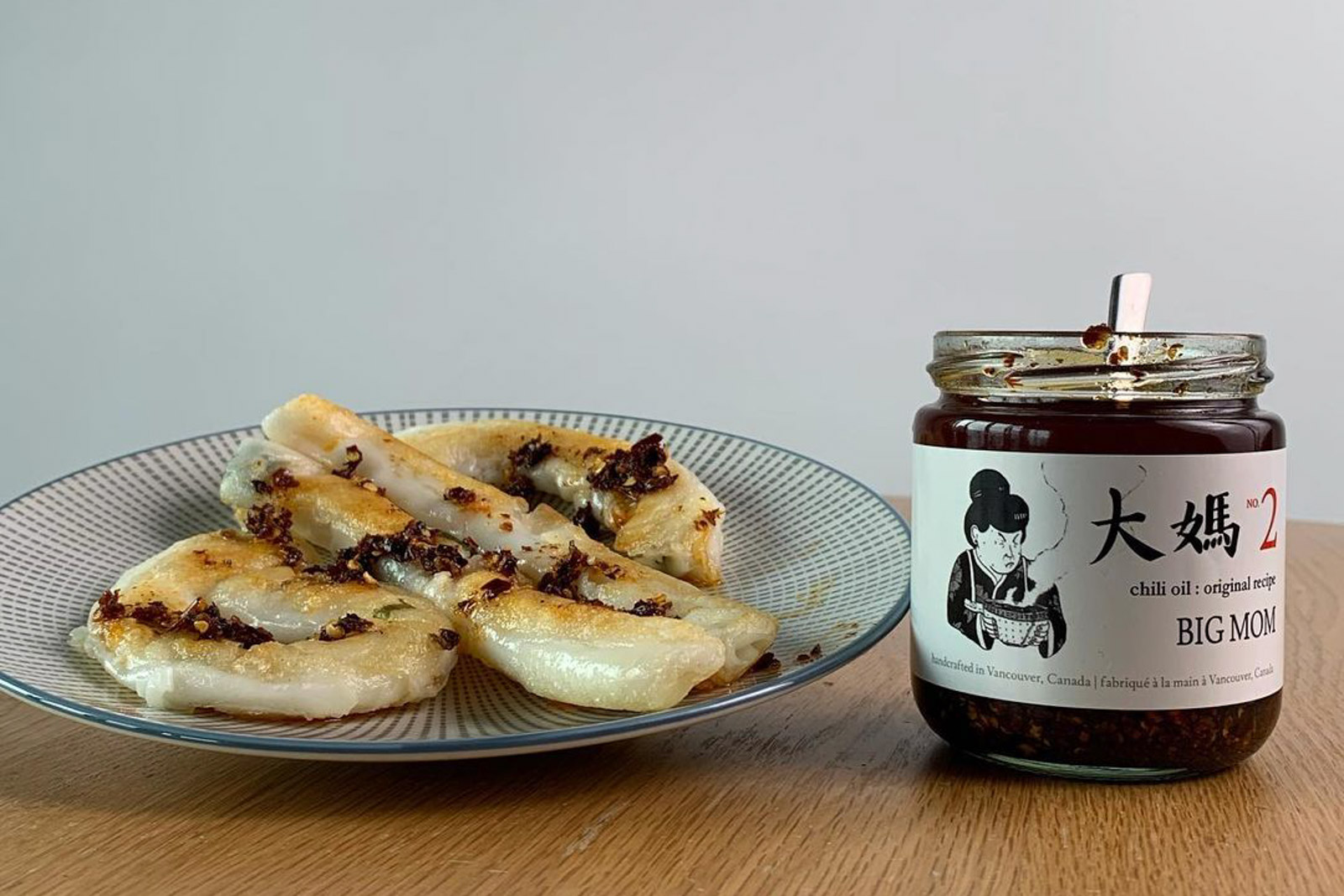 While he works his way through the cannabis bureaucracy, Wong is selling his chili oil by delivery and at stores around Vancouver. He says it’s no surprise that the classic Chinese condiment is taking off.

“I would call it the most robust condiment available,” he says. “It’s robust in flavour and in use. It can be a condiment and a cooking starter for a lot of dishes. It can be a sauce and a dressing. What chili oil means to people is that kick of flavour, even for the most bland dish. Just add it to some veggies and rice, and that’s it.”