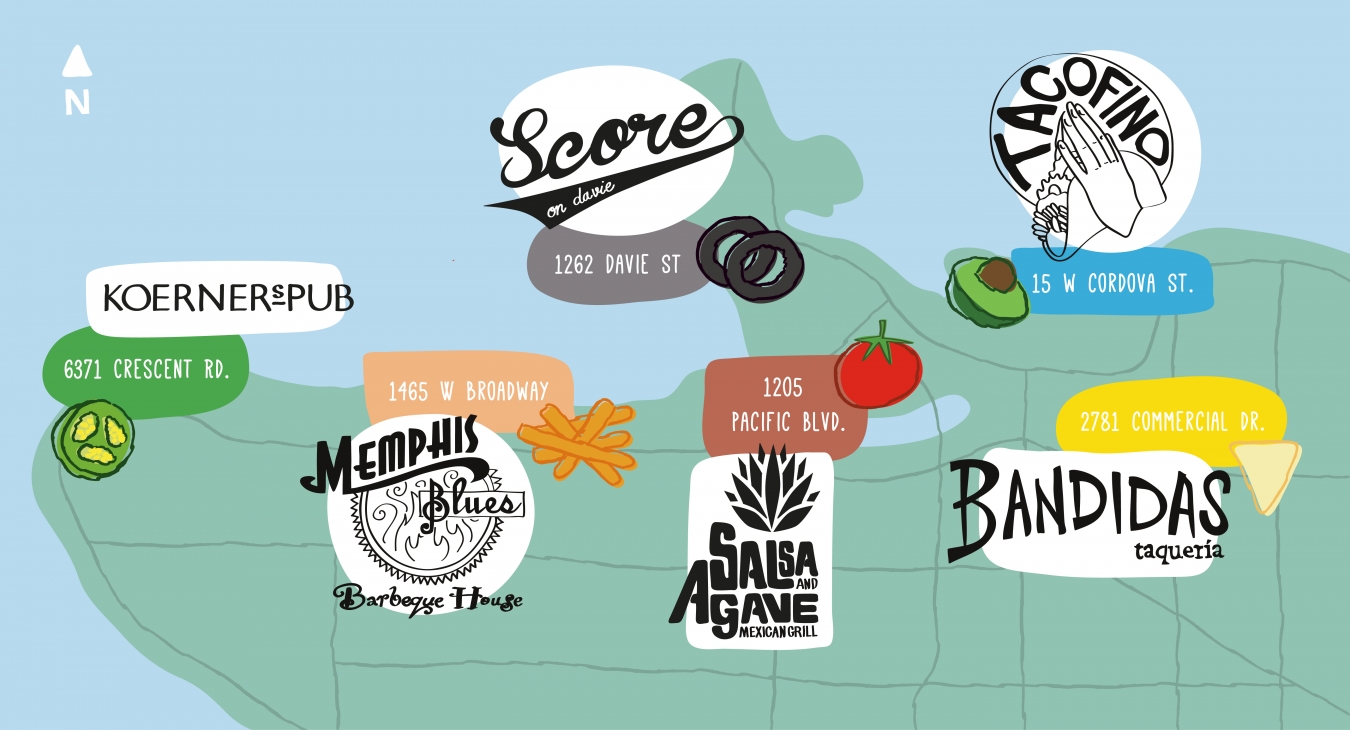 In January 2017, Vancouver entered a period of collective grieving: The Foundation on Main Street announced it was closing forever. The vegetarian restaurant was best beloved for its nachos, which could be reliably spotted on nearly every patron’s table. They were oven-browned, blanketed in melted cheese, and dense with beans, jalapeno peppers, and corn. Now they’re gone, reduced to a mere memory of an older, simpler time. Can Vancouver Make Nachos Great Again?

As I roamed the city eating platter after platter of nachos, I refined my criteria for greatness. Extraordinary nachos must have fresh tortilla chips that stay crunchy and don’t sag under their toppings, which should be distributed evenly throughout the plate. The edges need to be crisp and the cheese gooey. Their flavours must strike a balance of richness, freshness, and heat. And ideally, they are accompanied by a reasonably-priced side of guacamole. Below, the results of an in-depth comparison between six contenders for your new favourite nachos in the city.

Score on Davie in the West End has a lot of tempting menu items, but everyone seems to know it for its wildly-garnished Caesars and its nachos. We ordered the half-size, which arrived looking modest and reasonable—a very polite portion. It’s a classic arrangement: cheese, jalapenos, tomatoes, olives, and green onions, plus sour cream and a very tasty fresh salsa on the side. They had the most bite of any nachos I tried, courtesy of a generous distribution of jalapenos. If you share my appreciation for a spicy plate, you’ll be happy you went to Score.

I’ve never thought of nachos as a Christmas food, but Tacofino’s could make a strong case: they’re festively adorned with bright red tomatoes, creamy white chunks of cheese, and fresh green herbs. Nachos have many virtues, but they are not very pretty; Tacofino makes the strongest case for nachos as an aesthetic object. The chips were perfect: fresh and house-made, resiliently crunchy, and sturdy for scooping up the generous toppings. The artfulness extends to the distribution of garnish; each layer we excavated was covered with flavours. “I’ve never eaten nachos critically before,” said my husband, “but these are really good.” Each table has a giant stack of napkins, which seems thoughtful at first, then just practical. These are dense, pre-hibernation nachos. We came hungry and left in a happy, cheesy coma. Pro tip: order with chorizo and add guac. It’s worth it.

If there is a spiritual successor to The Foundation on this list, it’s Bandidas, which shares the vegetarian ethos and East Vancouver hippie vibe, but also the enormous, oven-crisped nacho platters. Bandidas subscribes to the movie popcorn system of pricing for their nachos, wherein it feels irrational to order a small size when the large is only slightly more expensive. Be warned, though: the large will defeat even the hungriest pair of eaters (nachos should be a standard double-date activity, based on the serving sizes). There are four choices at Bandidas, but I went with the Hampton, which includes pinto beans, spicy corn, jalapenos, and chipotle tofu, all blanketed by cheese. The edges were perfectly browned and lacy; the cheese was abundant, and the jalapenos were mild. The tofu and beans suggested nutritional value, so we felt good about eating so much that we wanted to nap at the table.

The website for Salsa and Agave stakes the bold claim that they serve both the best nachos and the best margaritas in downtown Vancouver. I ordered both, for research purposes. Their nachos include your standards: cheddar, jalapenos, and chopped tomatoes, plus refried beans, a drizzle of sour cream, and crumbly white cheese. The toppings were evenly distributed and delicious, but light. The refried beans were a solid innovation: they make a tasty adhesive if one wishes to stack chips high like a nacho club sandwich. These are appetizer nachos, not entree nachos. My dining companion and I polished off a large order, then went home to eat dinner. Oh, and the margaritas really were excellent.

Undaunted by the fact that nachos aren’t a typical barbecue food, the imaginative folks at Memphis Blues have created a nacho dish that fits right in with their menu. These include tortilla chips and melted cheese, with a hefty portion of smoky pulled pork and BBQ sauce on top. These nachos definitely require a fork to tackle. The addition of some acidity and brightness from tomatoes or jalapenos would have been nice here, but the pulled pork was delicious enough that I didn’t think about it too long. If you’re a hungry carnivore who eschews tradition, these are the nachos for you.

There are many draws on UBC campus that justify the journey—Nitobe Memorial Garden, the Museum of Anthropology, Wreck Beach—but here’s a lesser-known reason to make the trek: the pho nachos at Koerner’s Pub. I was skeptical, trying to imagine how the ingredients (braised beef, mozzarella, lime, bean sprouts, cilantro, hoisin, and Sriracha) would actually taste all melted together on tortilla chips. But unlike everything else in 2017 to date, this was a very pleasant surprise, because they are good. They look like a party, piled mountain-high on the plate. The fresh green flavours of lime and cilantro complement the tastes of the beef and melted mozzarella; slices of mild green chilis add crunch, and the hoisin and Sriracha are piquant enough that I didn’t even miss the regular accoutrements of salsa, sour cream, and guacamole. My one critique is uneven cheese distribution, but the serving was so large that I was able to curate nothing but perfect bites until I was completely full. There are also regular nachos on the menu for the traditionalist, and if you brought an entire soccer team you could maybe tackle both dishes. Only choosing one? Go for pho.

With the launch of La Taqueria’s newest location at Main and Broadway, the popular Mexican eatery has added something to its menu: nachos. Oh yes. Covered in house-made jalapeno pickles, white cheese sourced from Guadalajara, onions, corn, and a delicious tangy secret sauce, this plate of nachos means serious business. Dress the salted chips up with La Taqueria’s salsa offerings, and wash it all down with a glass of cold beer. Perfection.

So, while The Foundation is gone forever, taking with it the most beloved nachos in the city, Vancouver still has some skin in the Tex-Mex game. Life goes on, after all.