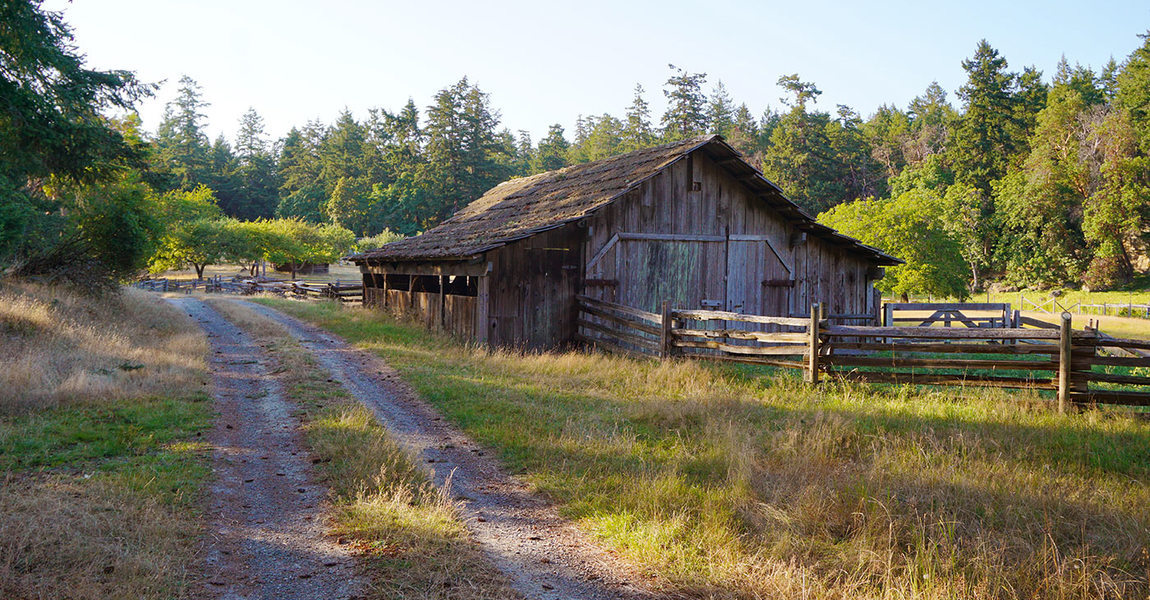 For sale: Undeveloped farm on a Southern Gulf Island.

Mark Lester strolls the peaceful acreage along the spine of De Courcy Island.

He notes the alders and arbutus trees, the cedars and gnarly Garry oaks. He marvels at the wildlife in the wetlands, admires the pastoral meadows and heritage fruit orchards. “All of that together,” he says, “makes it beautiful.”

Lester is the listing agent, so it’s expected he’d sing the praises of a property occupying close to a fifth of the island. He is also a part-time resident and a champion of De Courcy’s bucolic, off-the-grid lifestyle.

The island is a finger of land off the east coast of Vancouver Island, southeast of Nanaimo and due west of the Vancouver suburb of Richmond across the Strait of Georgia. It can be reached only by boat or float plane.

On a visit to a Nanaimo hardware store, Lester tells an inquiring clerk that he is from De Courcy.

“Have you found the gold yet?” the clerk asks.

She is referring to the legacy of a man with the ominous name Brother XII, remembered by history as the island’s most notorious resident. The property now for sale was once home to his occult society the Aquarian Foundation. Not surprisingly, the island’s isolation was the main draw. 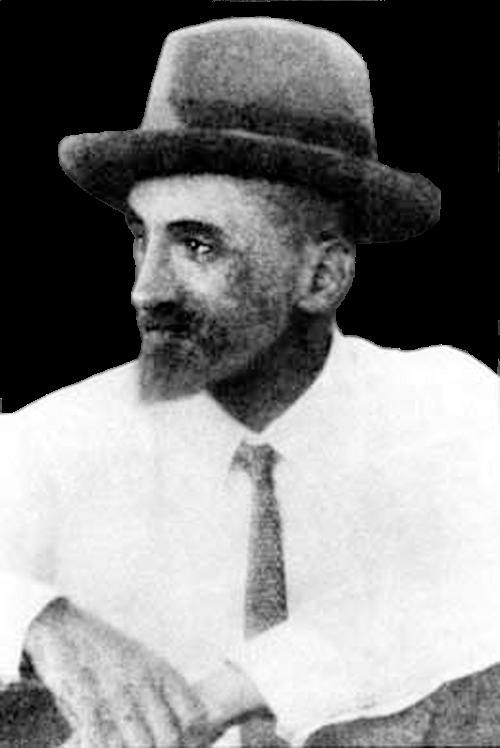 Edward Arthur Wilson was born in 1878 in Birmingham, England, to a father who was a successful manufacturer. His parents belonged to a splinter Christian group featuring ecstatic elements such as speaking in tongues. As a boy, Wilson even claimed to have seen angels.

Wilson travelled the world as a mariner and married a woman in New Zealand before moving to British Columbia in 1907, where he fathered two children. After a few years, he abandoned his family to return to the sea. At some point, he became a devotee of theosophy, a mystical, occult movement based on notions of universal brotherhood. Slipping into trances and announcing visions, he also wrote treatises and manifestos announcing the imminent end of the world order.

Further proof of his delusions, he attempted to form a political party to contest the American presidency.

In 1927, Wilson was back in British Columbia to prepare for the destruction of the world. By this time, he went by the name Brother XII. A thin man with a piercing stare and a wart on the end of his nose, he had a knack for convincing bored, wealthy people, especially lonely women, of his exalted status. He bilked them of money. 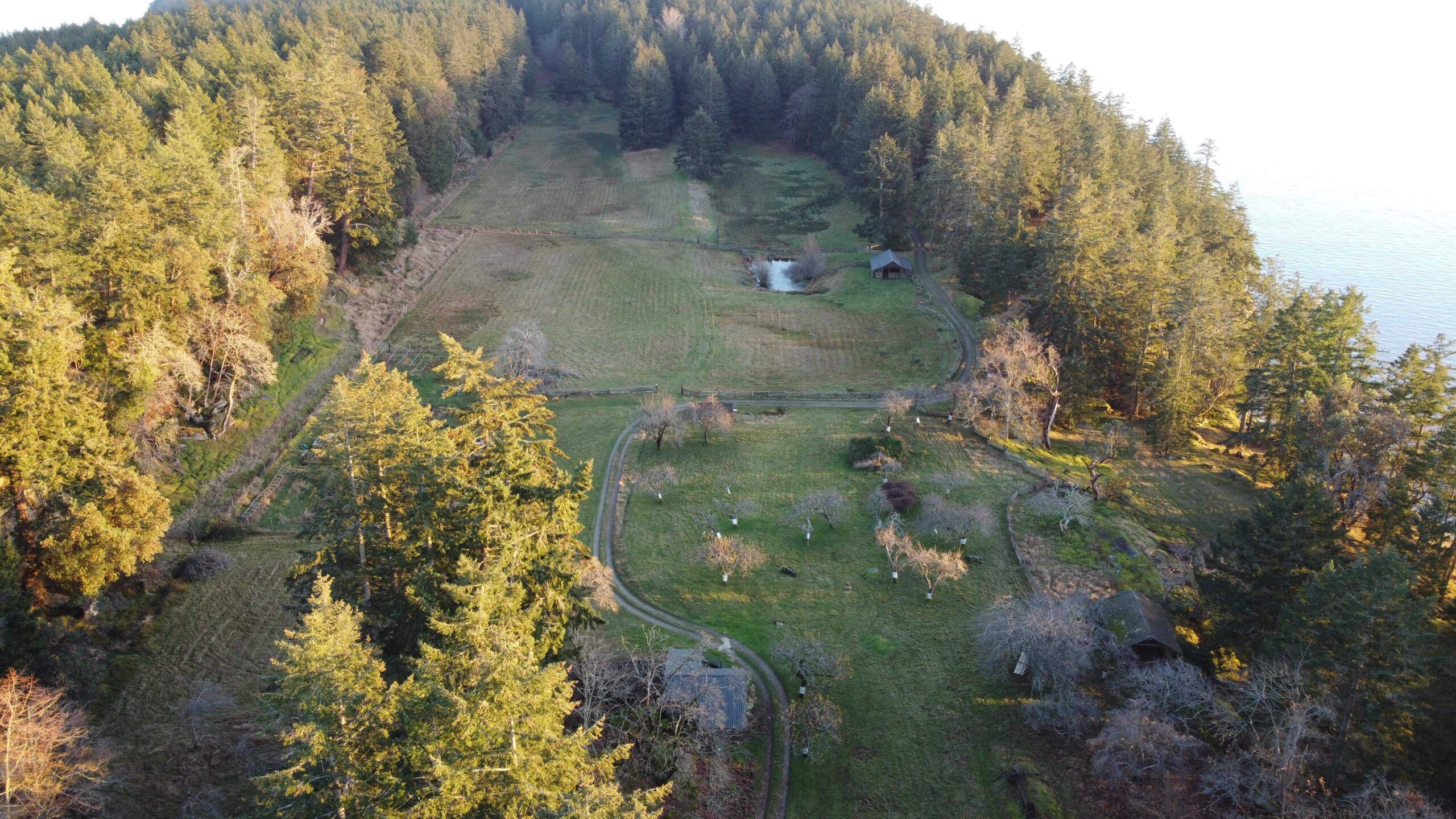 An aerial view of the now for sale compound.

The Aquarians, believing they would be the enlightened people to guide the world following Armageddon, built a fenced community at Cedar, a small village on Vancouver Island. Then Mary Connolly, an heiress from North Carolina, financed the purchase of land on De Courcy. Property was also purchased on adjacent Valdes Island.

While on a cross-country train trip, Brother XII seduced Myrtle Wells Baumgartner, a physician’s wife, later returning with her to the commune, where she was introduced as the reincarnation of the Egyptian goddess Isis. Brother XII claimed to be the reincarnated Osiris and announced his new lover would deliver unto them the reincarnated spirit of Horus, destined to become a world teacher by 1975. This proved too much for Brother XII’s other paramour, Elma Wilson, whom he had introduced to fellow occultists as his wife. She fled the commune. 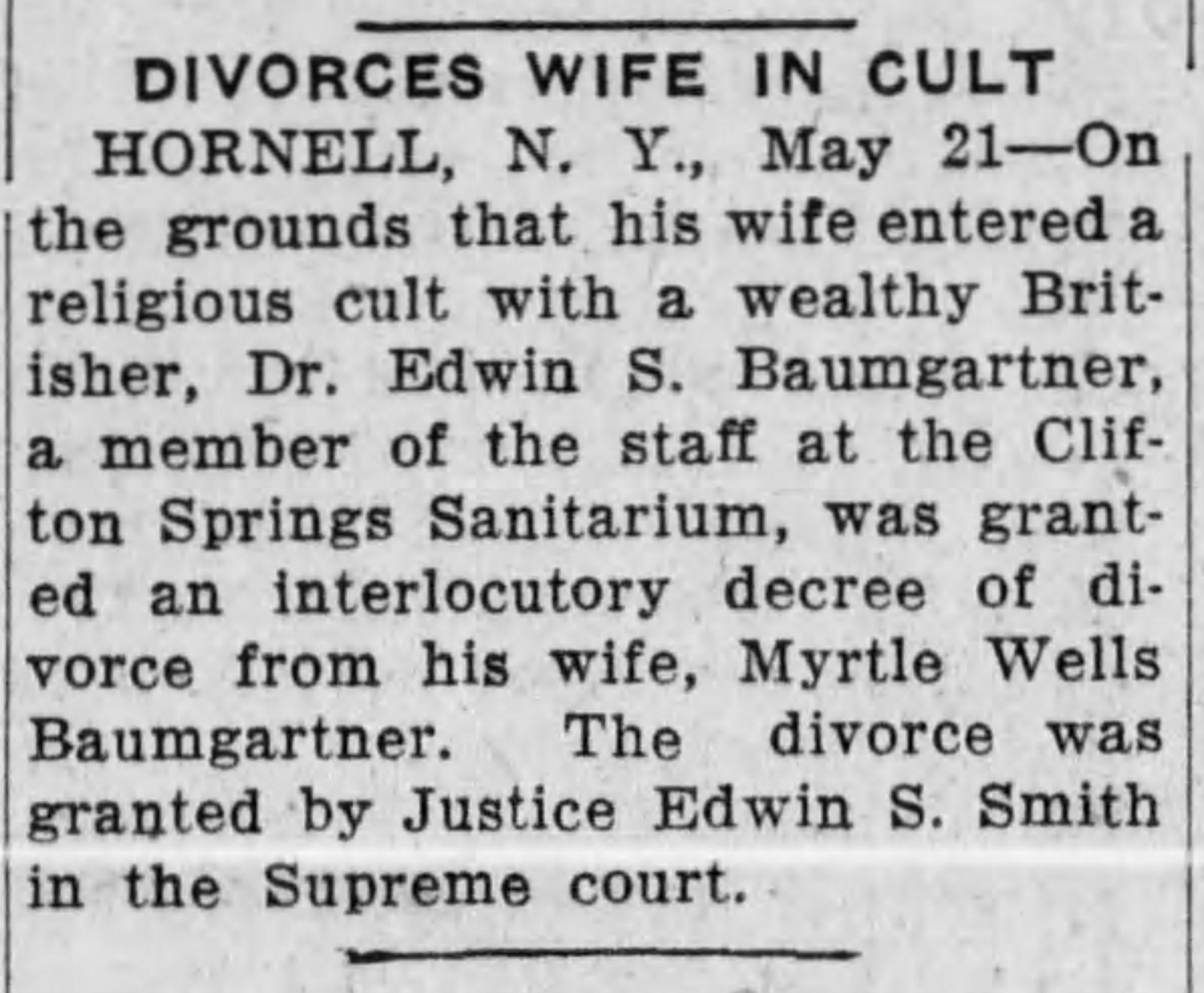 A clipping from The Evening Times in Sayre, Pennsylvania, May 21, 1931.

Other sect members were scandalized. Brother XII was charged with theft and sued by disgruntled Aquarians. He was acquitted after Connolly testified she had given him the contested money as a personal gift.

Brother XII regarded the ordeal as a betrayal by untrustworthy disciples which brought a nastier edge to life on the island. He was egged on in his suspicions and paranoia by his latest consort, the former Mabel Skottowe, who took the name Madame Zee.

Allegedly, Brother XII correctly predicted a calamity in the stock market in 1929, which solidified his hold over his faithful followers. They were told the island was to be a city of refuge for the lucky few in the coming collapse.

But the high was short lived. By1931, members were chafing under the increasingly tyrannical behaviour of their leader and his consort, whom he had married in an occult ceremony. Anyone who dared question the pair’s authority found themselves banished back to Cedar.

Mary Connolly and another former follower sued in court for the return of their money in a case that included accusations of black magic. Connolly won, but Brother XII and Madame Zee, who by then had taken the names Amiel de Valdes and Zura de Valdes, had vandalized the property and fled with their followers’ money. It was believed they had converted the donations into gold coins and secreted them in buried caches around the island.

A doctor in Switzerland, who was also an Aquarian disciple, declared Brother XII (by then using yet another name, Julian Churton Skottowe) dead on November 7, 1934. The declaration was not believed by everyone, however. Author John Oliphant, who wrote the definitive biography of Brother XII, describes a “credible” sighting of the bizarre leader in San Francisco two years after his supposed demise. 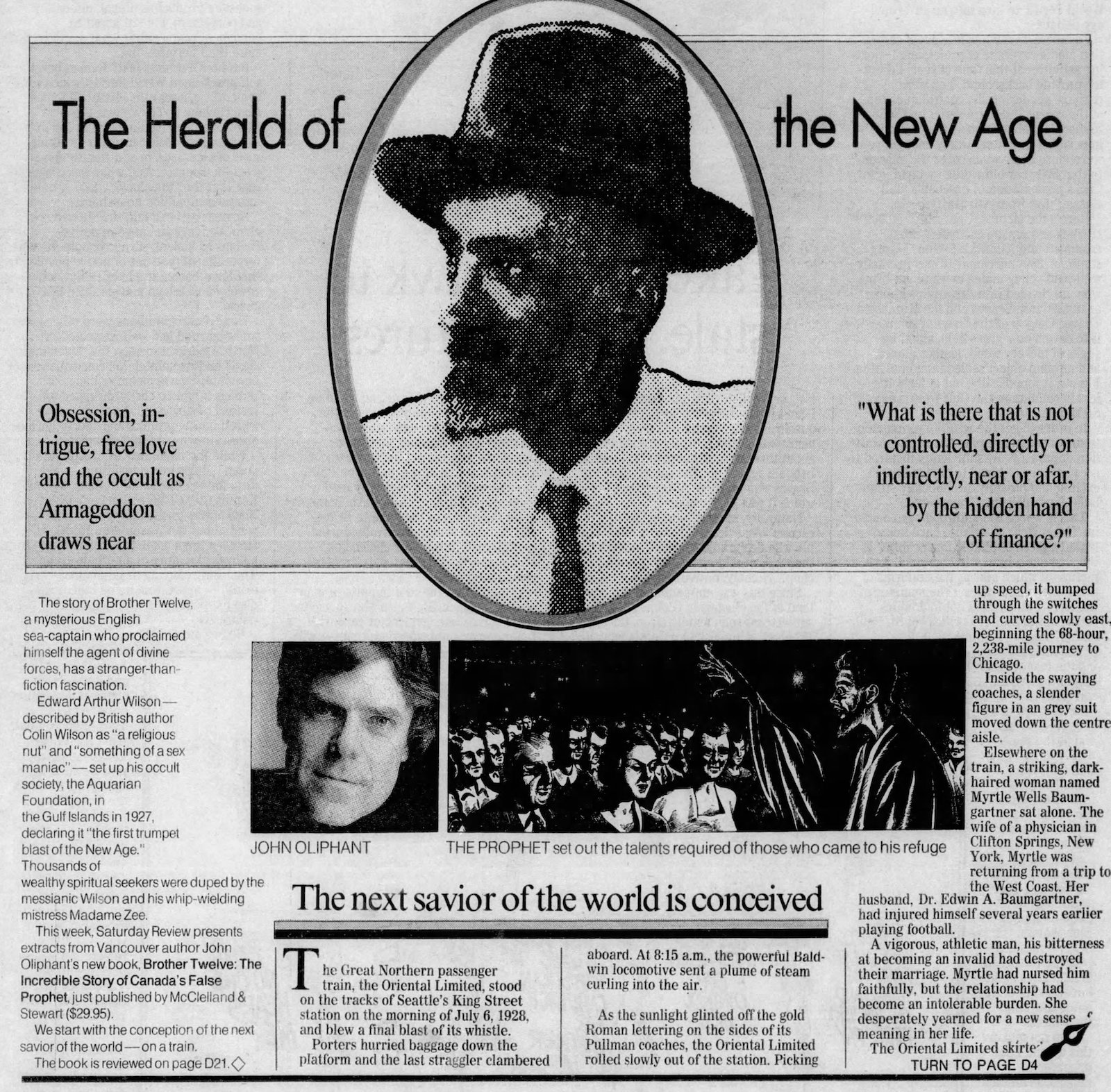 A story on Brother XII from the Vancouver Sun by John Oliphant, Nov. 2, 1991.

People back on De Courcy have wondered if any of the gold was left behind in the couple’s haste to flee. In an underground vault discovered near an outbuilding on adjacent Valdes Island, there was a note reading: “For fools and traitors, nothing!”

The commune’s original barn still stands on the De Courcy property. The island has a year-round population of about 30, and about 200 people live there in summer. A lively social calendar includes Easter and Thanksgiving gatherings, and the volunteer fire department is a shared commitment among residents. Pirates Cove Marine Provincial Park occupies 75 acres on the island’s southeast end, while an adjacent marina serves visitors and residents.

Sabrina and Dane Clark, a newly arrived couple on the island, sell baked goods as well as fermented tonics, drinks, and condiments under the label Pirates Cove Trading Company. Theirs   is the only retail business on the island.

Lester, the real estate agent, figures Brother XII’s former homestead needs a buyer interested in stewardship of a farm with a colourful history. A large family might be interested in a compound with a few residences, or perhaps some people might form a co-operative to share the land.

In any case, he does not expect the new owners to find a windfall beyond the natural bounty of the land.

“I think the gold is long gone,” Lester replies.