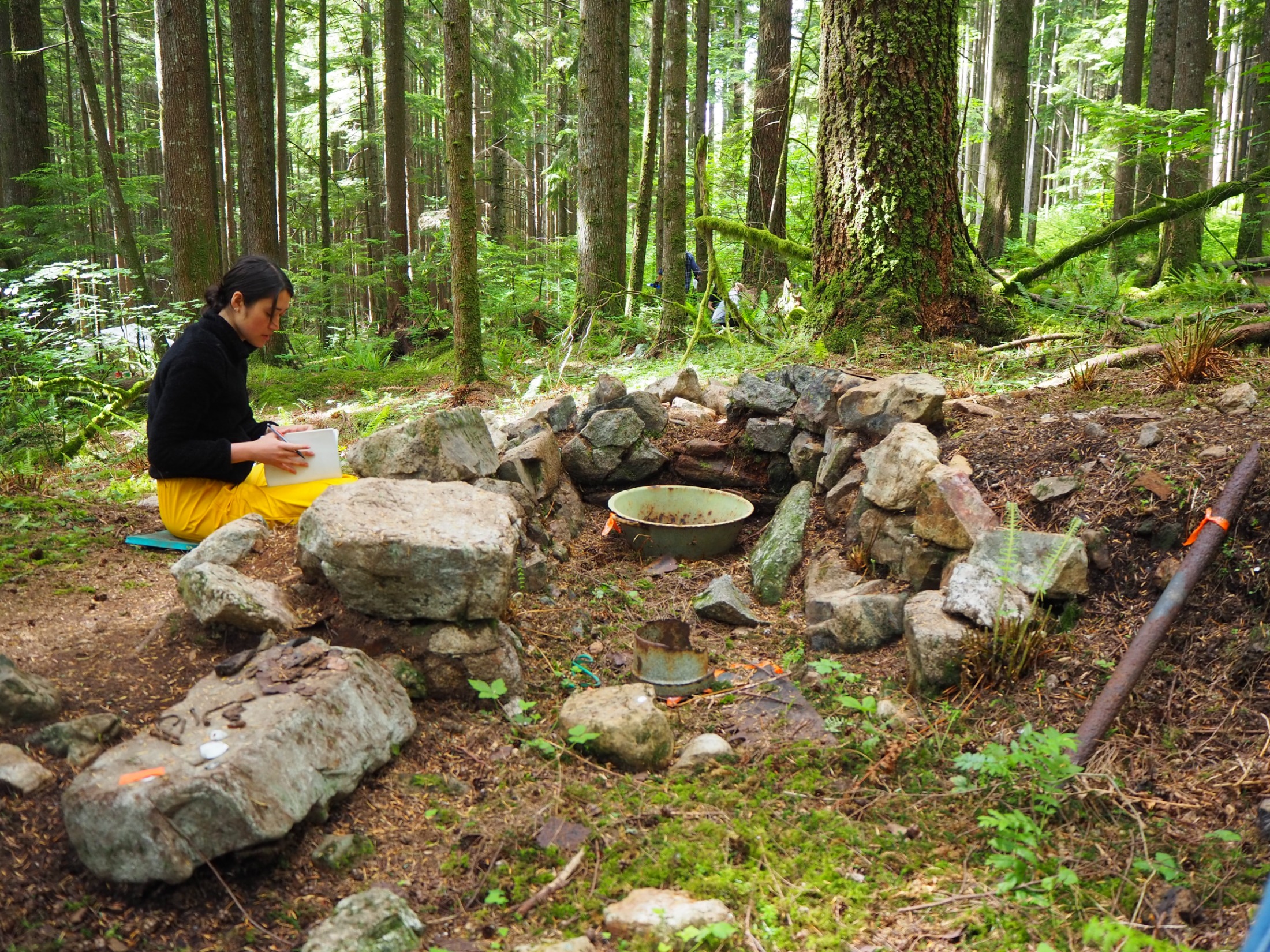 An archeology student examines the ofuro (a traditional Japanese bathhouse) at the dig site. Photo courtesy of Bob Muckle.

When Bob Muckle first arrived at the Mackenzie Creek site back in the summer of 2003, he had no idea what he was looking at.

“It was heavily overgrown,” the archaeology professor from Capilano University recalls. “There wasn’t much on the ground surface at all, but there was enough there that I assumed it had been some kind of logging camp. I could see some cans scattered around, and a saw blade. I could see part of a maul for splitting wood.”

“Back then, I had no idea what I had, but there was enough that I knew I wanted to go back.”

Over the course of the next 14 years, Muckle and his students from the university’s archaeological field school in North Vancouver discovered that this was no mere logging camp. In fact, it was the remains of a Japanese settlement nestled deep in the Lower Seymour Conservation Reserve—one Muckle believes was secretly inhabited until the early 1940s. 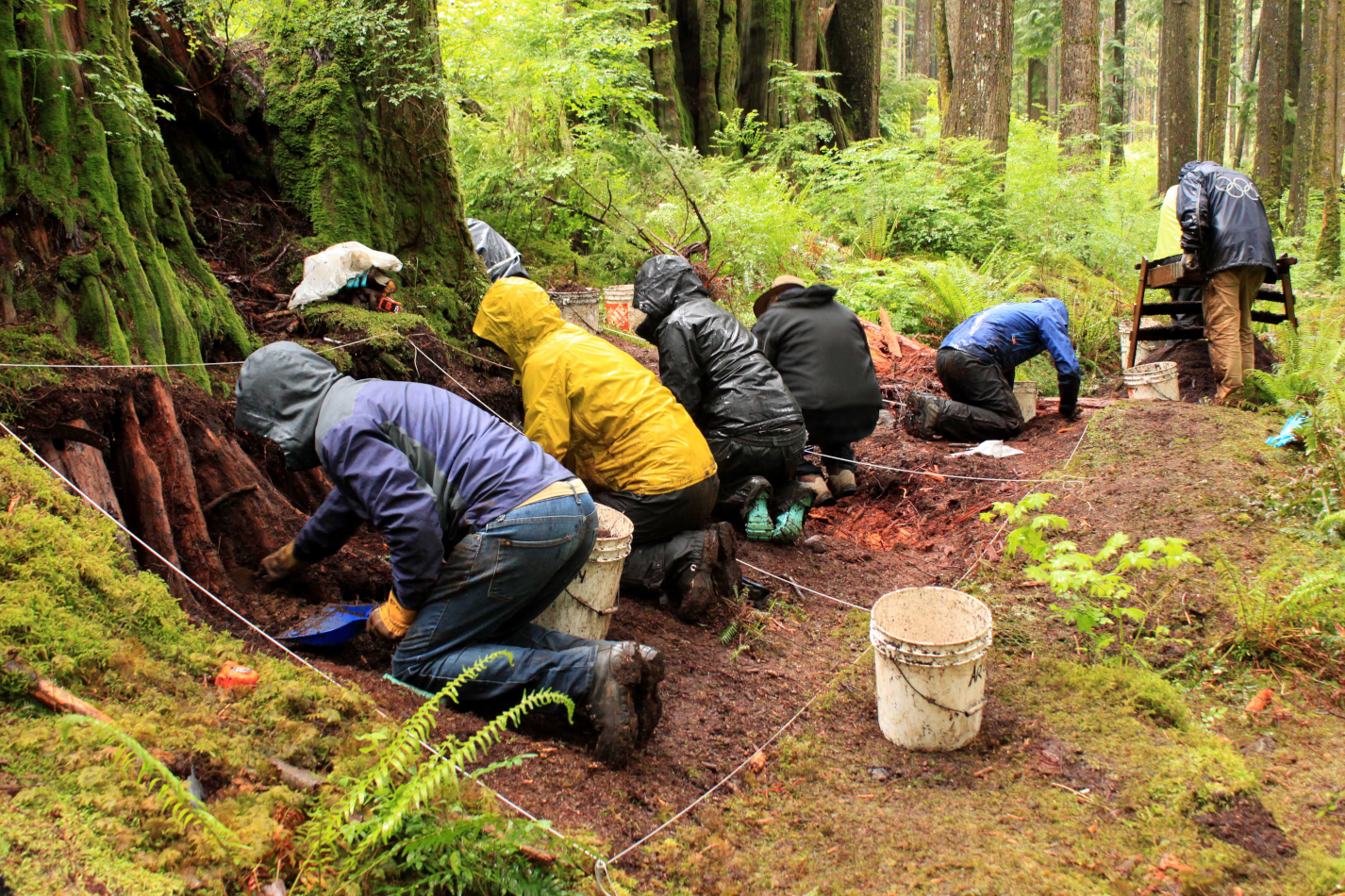 “After its use as a logging camp ceased in the early 1920s, I’m almost certain that a group of Japanese workers continued to live there—and kind of in secret—until 1942,” he says. “To me, that’s the most significant, interesting part. I haven’t found the smoking gun yet, but there’s plenty of circumstantial evidence.”

That evidence includes roughly 1,000 artifacts (including dishes, sake bottles, pocket watches, and work boots), along with the remains of at least 14 cabins, a Shinto shrine, a water reservoir, and an ofuro (a traditional Japanese bathhouse).

Logging operations in the Seymour Watershed were widespread throughout the early part of the 20th century (Muckle has done archaeological work at several other sites nearby), and many of the workers in these camps were of Japanese origin. In 1918, Japanese businessman Eikichi Kagetsu purchased logging rights to the area, establishing a series of camps, which existed until 1924. But the logging boom wouldn’t last long, at which point Kagetsu set his sights on Victoria.

“In about 1923-1924, he moved his operations over to Vancouver Island,” Muckle notes, “and my guess would be that he told his workers, ‘Look, we’re going to the Island. Anybody who wants to come can come.’ And I think quite a few did. But some said, ‘We like it here,’ and stayed right there.”

Despite it being roughly the size of a football field, the exact location of the Mackenzie Creek village has been kept under wraps (to prevent the disturbance of any remaining artifacts). As Muckle points out, the site is unique within North America—both for its transition from a logging camp to a long-term living space, and its surprisingly well-preserved artifacts.

“In archaeology, so often what we find is trash—broken dishes, broken bottles, and the like,” Muckle says. “But the selection of dishes at this site was quite good. They had some nicks in them but overall, compared to other places, the amount of intact dishes was phenomenal. Also, a high incidence of personal items—combs, and toothbrushes, and clocks. Pocket-knives. A lot of work boots. The sort of things people wouldn’t normally leave behind.” 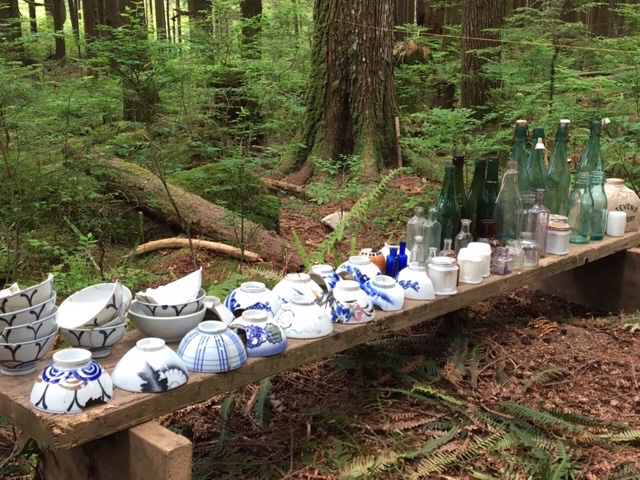 Bowls and bottles are among the approximately 1,000 artifacts recovered here. Photo courtesy of Bob Muckle.

To Muckle, the organization of the site indicates a sudden departure. This could have been precipitated by the Greater Vancouver Water District’s acquisition of private property in the Seymour Watershed in the 1930s (undertaken to protect the water supply). Or—and this scenario is more likely in Muckle’s opinion—the Mackenzie Creek settlers were rounded up and sent to internment camps in 1942, along with much of BC’s Japanese-Canadian population.

They also left behind some valuable timber, Muckle notes. “If they were going to move their operation, they would take it with them. Yet, that whole strip remains on the site.”

Despite there being no evidence of Japanese-Canadian involvement in World War II, the frenzy surrounding the December 1941 bombing of Pearl Harbor was seized upon by a number of opportunistic BC politicians, chief among them Vancouver alderman Halford Wilson, and Ian Mackenzie, federal MP for Vancouver Centre.

“It is the government’s plan to get these people out of BC as fast as possible,” Mackenzie said in his September 1944 nomination speech. “It is my personal intention, as long as I remain in public life, to see they never come back here. Let our slogan be for British Columbia: ‘No Japs from the Rockies to the seas.’”

At Mackenzie’s urging, Ottawa convened the Standing Committee on Orientals, a group composed mostly of white racists, in particular New Westminster mayor Fred Hume. Hume was particularly vociferous in his condemnation of Japanese-Canadians, recommending their immediate deportation and imprisonment, leading one contemporary observer to note that the committee spoke of Japanese-Canadians in the way that the Nazis would have spoken about Jewish-Germans.

“[A] good deal of the agitation for the removal of the Japanese had nothing whatever to do with the war or the necessities of defence,” noted the Vancouver Daily Province in February 1942, “but was promoted by agencies that had political axes to grind or selfish interests to serve.”

Interned Japanese-Canadians were devastated. Close to 1,000 letters were written and sent to Ottawa, all of them expressing shock and betrayal, citing charitable and community contributions, and begging for the right to retain their homes.

“Surely there must be a terrible mistake somewhere!” wrote Japanese-Canadian citizen Macer Okamoto. “I can’t even imagine any possible reason for our property being confiscated. It would be different if my father happened to be a Japanese National (an enemy alien) but if you will take the trouble to look up the records, you will find that he is a naturalized Canadian citizen… Doesn’t his naturalization papers mean anything?”

Ultimately, 90 per cent of Canada’s Japanese population (most of them citizens) spent years in substandard conditions throughout the B.C. Interior, while their property and possessions were sold off to white buyers, usually at bargain prices. In 1986, a Price Waterhouse audit concluded that the losses to Japanese-Canadians exceeded $400 million. The Mackenzie Creek settlers likely fared no better.

Despite these historic injustices, the lost village was recognized as a provincial historic site in 2017, thanks to Muckle’s work. 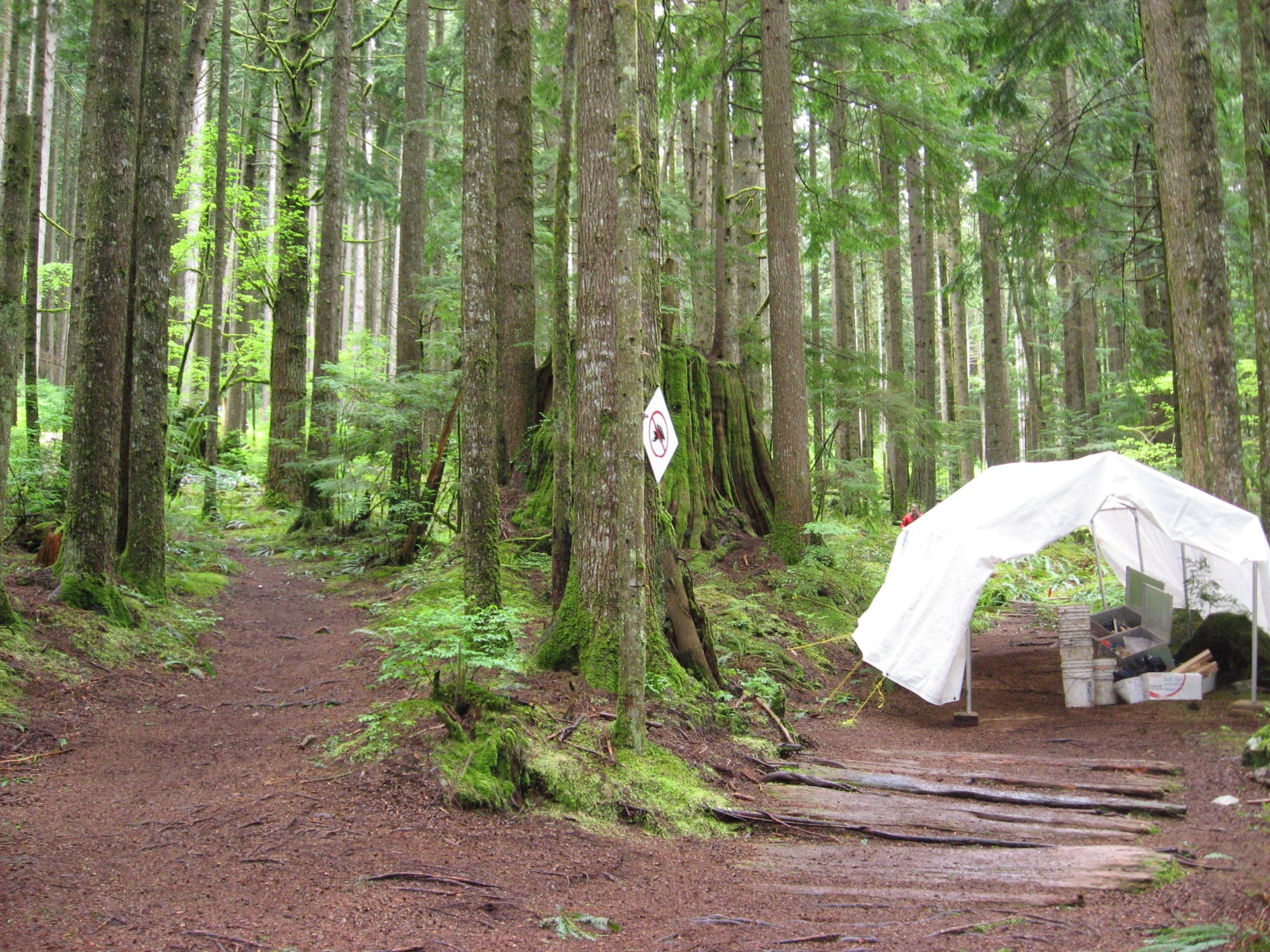 The path into the community, on the right, branches off an old logging road. Photo courtesy of Bob Muckle.

He continues to hold out hope that he’ll ultimately find the “smoking gun” that proves his internment theory.

“It’s a long haul,” he admits. “I’m still hopeful that I’ll find an artifact dating to the 1930s or 40s. You go by the styles—how they were making cans or bottles—but the problem is that a lot of them could be from anywhere between 1910 and 1945. A bunch of the dishes have “Made in Japan” stamped on them, and we know that only started in the 1920s, for example. But I’m still quite hopeful we’ll find something.” 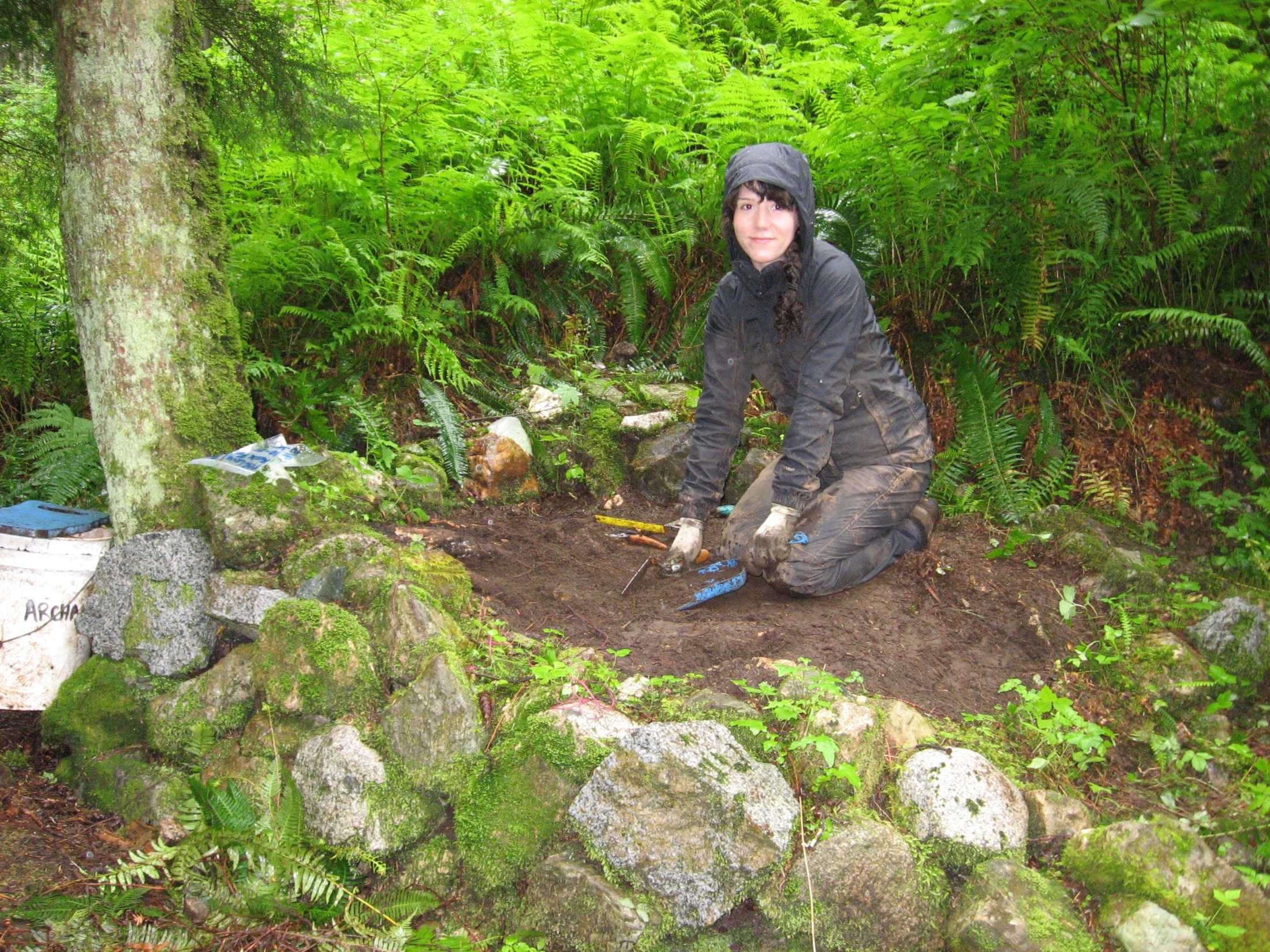 He’s also hopeful that further reporting will lead to additional input from B.C.’s Japanese-Canadian population. In fact, if it weren’t for a chance encounter during that very first field season, he may not have figured the site out at all.

“It just so happened that there was a Japanese woman in the group, and she asked, ‘Where’s the ofuro?’” he recalls. “And I sort of said, ‘Pardon me?’ I had no idea what an ofuro was. She said, “It’s a traditional Japanese bathhouse. If they went anywhere, the first thing they would build would be a bathhouse. Before a house, before a cabin, before anything.’”

“I went home and had the worst sleep of my life,” he continues. “I thought, I’ve been an archaeologist since the late 1970s, and I don’t even know what I’m supposed to be finding here. But this woman was so convinced it would be there. So, I went back in the next morning, all keen. Normally I’d be supervising my students, but that day, I told them, ‘You’re on your own. Call me if you need me, but I need to find this bathhouse.’ And I ultimately did.”

“I feel so bad,” he laughs now. “I wasn’t keeping very good notes back then, so I can’t find her. And it’s such a shame—without her help, we may never have excavated that area.”