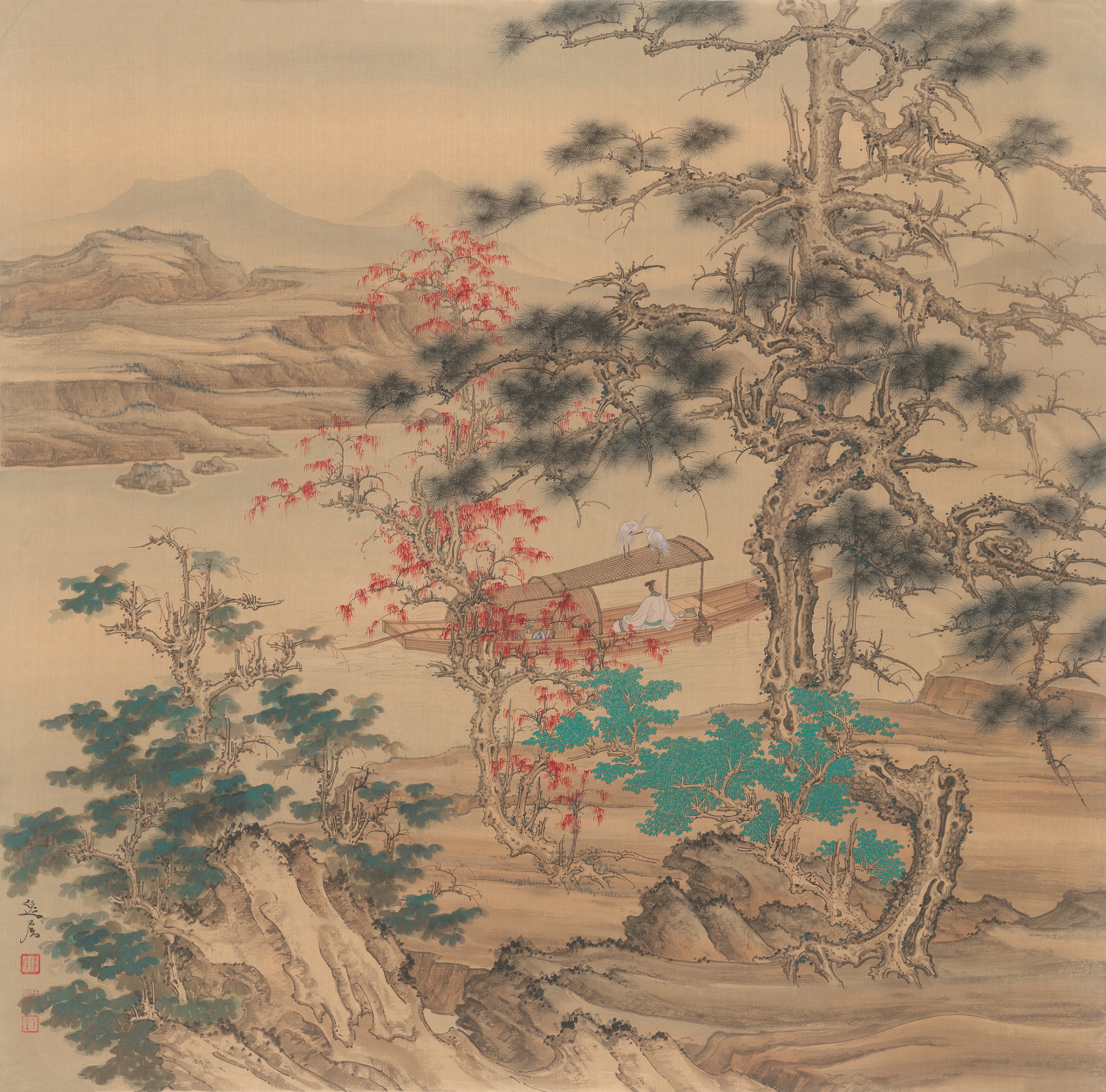 To move through the rooms of Ren Zhong’s new exhibition at Vancouver’s Sunzen Art Gallery is to glide through nature’s seasons, from winter’s bleak chill to spring’s promise, and beyond.

On a recent guided tour of Ren’s 38 contemporary Gongbi paintings—now hanging in the city’s only gallery dedicated to this genre of traditional-style Chinese art and calligraphy—we start, appropriately, in winter, in front of a meticulously stroked, sombre painting of snow-draped branches. 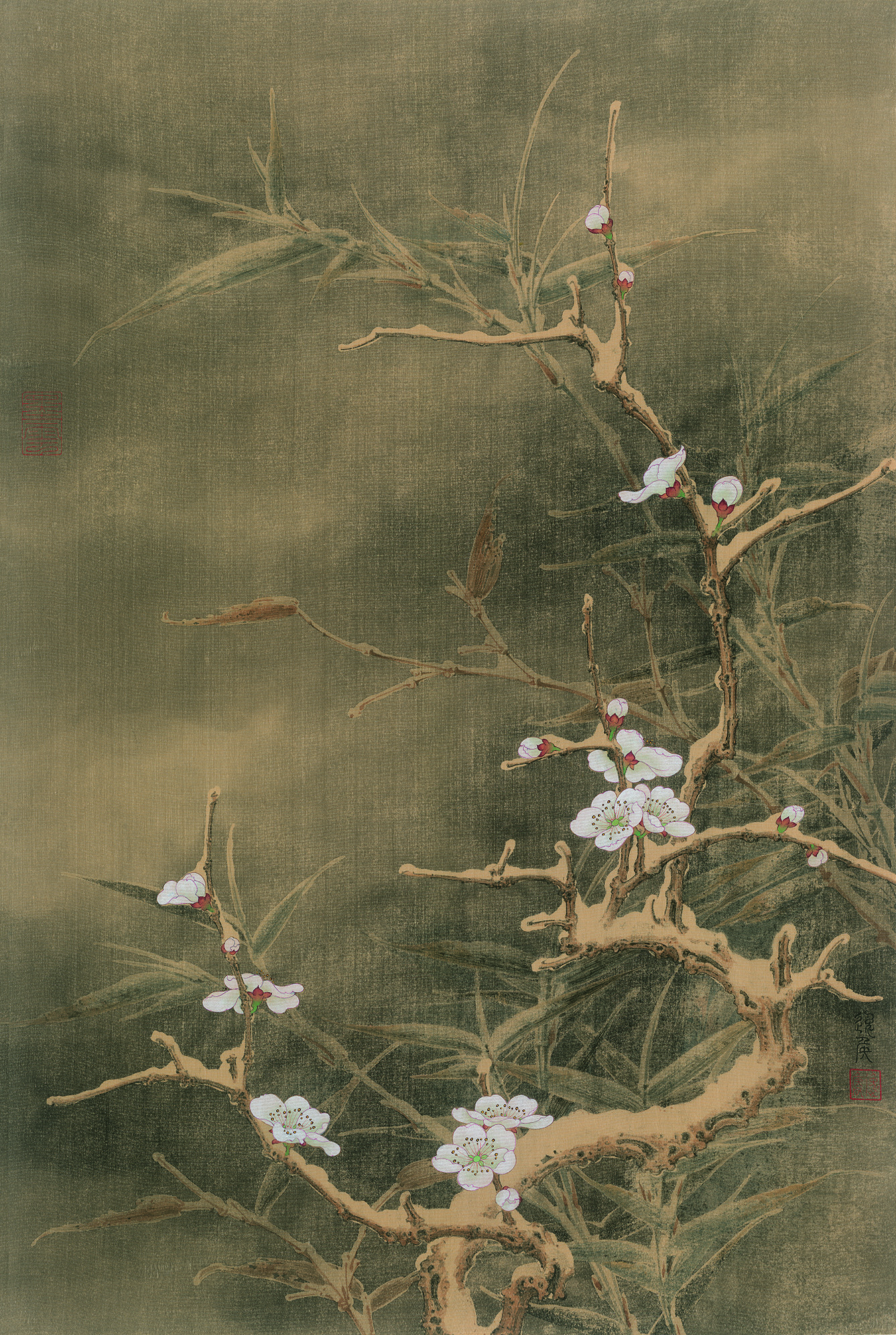 Ren (who at age 43 has already seen his work presented in major museums in China, at notable international art fairs, and sold at auction for more than $1 million USD) is a master of this form, says the exhibition’s co-curator Lam Wong, who is also the artist-in-residence at the Sun Yat-Sen Classical Chinese Garden.

Ren’s wintery landscapes reflect a deep understanding of nature, and capture our fleeting connection to the snow as it falls. For Wong, the fine yet fluid brush strokes evoke a sense of ji—of solitude and tranquility, with a touch of sadness. It’s a bit like appreciating cherry tree blossoms, he says: they’re glorious when they bloom, but you know the petals will soon flutter to the ground. 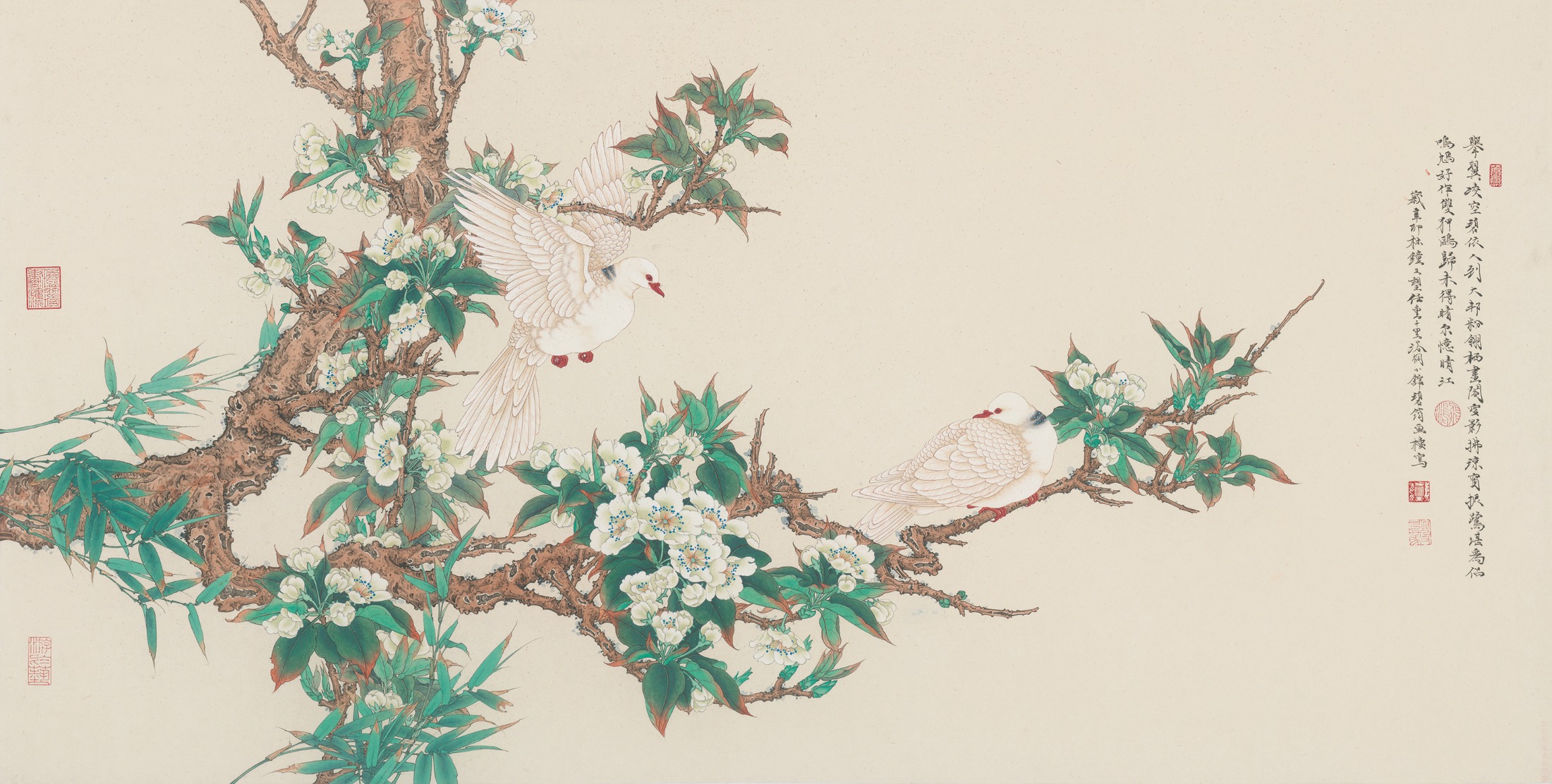 “A Couple of Turtledoves in Cluster of Pear Flowers.” Painting by Ren Zhong (courtesy of Sunzen Art Gallery).

From winter, we move to spring, where the buds are beginning to bloom and birds land on a branch. Soon we’re immersed in summertime paintings, brimming with brighter backgrounds, green leaves and lotus blossoms. Finally, we find ourselves in autumn, where two horses softly nuzzle noses in a still-green meadow, an old pine tree standing guard over the intimate scene, with mountains rising in the background.

Ren even pays tribute to a famous scene of deer congregating in a fall maple grove, originally painted thousands of years ago by an unknown Chinese artist.

Upstairs, our tour of nature through Ren’s eyes continues with his series on figures, often solo, generally scholars or sages, always contemplating the harmony of nature.

There’s Guanyin, the popular goddess of mercy and compassion, and a colourful, Tibetan-influenced god of wisdom sitting on a lotus flower. But mostly the paintings depict a pensive, solitary wise man floating quietly in a boat—one with an ancient, seven-string musical instrument by his side, another with tea, a fishing rod, and a bamboo basket to hold the day’s catch. Always on a river surrounded by gnarled old pine trees (a symbol of longevity), with mountains in the background. Pictures of tranquility.

On the gallery’s far wall, the previously solitary figures unite in a single frame for a leisurely afternoon of shared appreciation for the nature that surrounds them. One scholar rows the boat with a long bamboo pole, as two white cranes look on from a rock.

“It’s like a fairytale,” says Lin Li, who works at the gallery and has a master’s degree in art history. With its waterfall fading in the background, the scholars in this boat can go anywhere they’d like on this potentially endless river. It has no limits, she says. To see yourself in this painting is to lose yourself in the middle of nature.

The French call this joie de vivre, like Renoir’s famous ode to friends picnicking by a river, adds Wong. “It’s the pleasure of life.”

Ren Zhong’s first Canadian exhibition, Twin Wings to the Glory, runs until Feb. 21, 2020 at the Sunzen Art Gallery in Vancouver, and is free to the public.