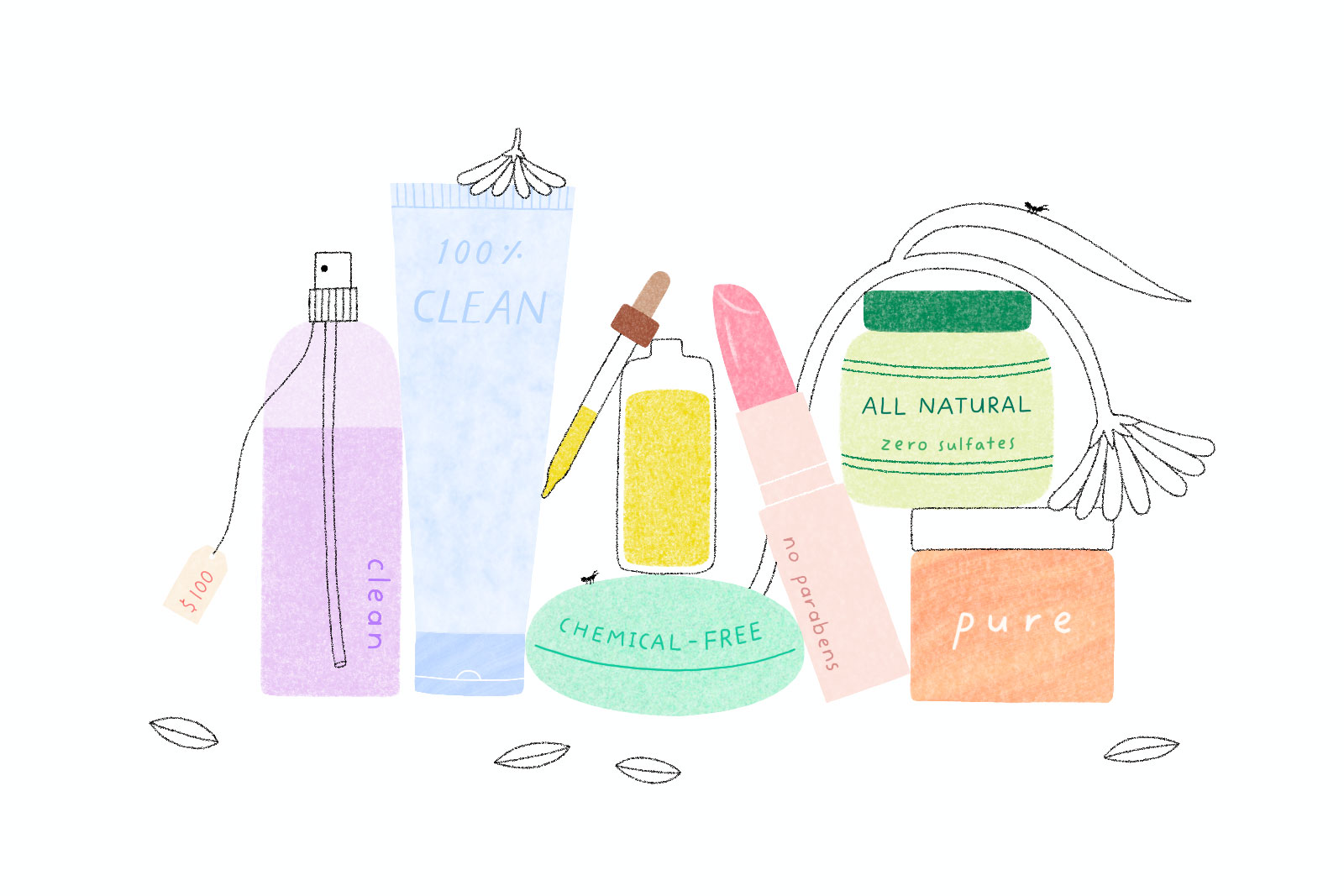 Are you a fan of smaller beauty brands that advertise the use of clean ingredients over the usual industry staples? You’re not alone.

According to research by NPD Group, 68 per cent of customers seek brands that use clean beauty ingredients. To many in the beauty industry, however, there are problems with this idea. First, the term “clean” isn’t regulated or defined—it’s used to talk about everything from eco-friendliness and sustainability to highlighting omitted ingredients such as parabens or sulphates. “When it doesn’t have a definition, it doesn’t serve a purpose,” points out Prudvi Kaka, chief scientific officer of Canadian brand Deciem.

Second, according to cosmetic scientists, there isn’t much evidence these ingredients do any harm at all.

Take parabens, usually top of the naughty list in the clean beauty conversation. A small study published in 2004 found these preservatives in breast cancer tumours. Other studies determined parabens have estrogen-like properties, and it’s proven that estrogen can fuel the growth of breast cancer cells. Ergo, the story goes, parabens cause cancer.

The American Cancer Society has pinpointed several issues with this theory. The 2004 study didn’t demonstrate that parabens cause cancer, simply that they are present in tumours. In addition, parabens’ estrogenic properties are known to be far weaker than natural estrogen or estrogen from hormone replacement therapy. The society determined that based on the current evidence, there are no clear health risks from parabens in cosmetics. The U.S. FDA is also monitoring the use of parabens in products and so far has found no evidence that they’re harmful to health.

Cosmetic scientist, podcaster, and science educator Jen Novakovich says there’s a similar story behind most of the ingredients that are dubbed “unclean,” including sulphates, mineral oils, and sunscreen ingredients. Even though there has been successful legal action against Johnson & Johnson claiming talcum powder causes ovarian cancer, the research says otherwise.

Many scientists believe the clean beauty industry is fearmongering, using language that teaches us to be afraid of chemicals. But as a new campaign from Deciem points out, “Everything Is Chemicals.” Yet the narrative persists that our beauty ingredients are trying to kill us. Why?

Dr. Ricardo Diez, a cosmetic scientist and adjunct professor at Rutgers University who has formulated cosmetics for large corporations for decades, says it’s all marketing.

“The cosmetics industry is old—it’s been around for about 100 years. As time passes, it becomes more difficult to innovate and find something new,” he says. “They can’t come up with anything better than what already exists, so they take the alternative approach of saying that these great products you have on the market that are good and cheap are in fact not safe for you.”

A common claim from the clean beauty industry is that beauty ingredients are unregulated because many ingredients aren’t banned. In fact, Novakovich says, some of this is yet more fearmongering and politicking. She references the California Toxic-Free Cosmetics Act, a bill banning so-called toxic ingredients in California.

“There’s the idea that now cosmetic products will be safer because of that bill, but many of the ingredients that were banned weren’t actually used in cosmetics,” she says.

Diez says that if anything, he would welcome more regulation, because big mainstream companies have the resources, money, and know-how to be much safer than the clean beauty industry, where brands are typically quite small. “Both Procter & Gamble and Unilever have environmental safety departments of 200 people, and their job is to ensure that what goes to market is safe for the environment and users.”

Mistakes still get made, but Diez says these are generally quickly resolved at the instigation of the cosmetic companies, and they’re not the same as the “invented dangers” of the clean beauty industry.

“If the cosmetics industry was regulated, clean beauty companies would not exist,” Diez says. “The only ones that would remain are the ones from large corporations, because they have the ability to prove that products are safe and will do what they claim they do.”

But really, if these brands are making lovely products, where’s the harm in using them?

Diez points out that with clean beauty, you’re often charged more money for a product that will not work as well as the “unclean” version. You’re also potentially eliminating ingredients that have been safely used for many years and introducing ones that are less tested.

“There are clinical studies that are not fully validated,” Kaka explains. “Yet they are overshadowing a known class of chemicals and leading the industry to take a different direction that is not the right one.”

Helen Ambrosen, co-founder and inventor at Lush, adds that marketing products based on what you’re not using rather than what you are using is problematic.

“This omission can create negativity around certain—often established—ingredients, and it may not be based on science, just hearsay,” she says. “An ingredient being thrown out of favour just because of branding is a shame.”

She believes being honest with customers about ingredients is essential. Kaka agrees that educating customers is key to helping people, usually the younger generation, understand the science behind their cosmetics and the ingredients that are in them.

“If I take my mom as an example, she doesn’t know what hyaluronic acid or niacinamide is,” he says. “But the other customer is growing—the ones who have curiosity about what they are using. When you look at that audience, we feel like giving more transparency and information is helpful.”

Ambrosen believes that through education, brands create accountability. “There’s trust in us to have done the work, to ensure nothing is in our products that could cause any harm.”

But, scientific education is difficult.

Novakovich is part of an informal online community of scientists who amplify each other’s social media posts in an effort to counter misinformation, but it’s a battle. “With science, you want to give all the nuance, and that is a struggle on social media,” she says. “If you don’t give the nuance, the scientific community gets mad because you can’t make blanket statements. But people on social media don’t want nuance.”

It gets worse: a recent study suggested that trust in science alone can actually make people more susceptible to pseudoscience, and that literacy was needed more than blind faith. “Science isn’t the ability to regurgitate facts,” Novakovich says. “It’s the ability to understand how things work and reason scientifically.”

Novakovich isn’t optimistic we can turn back the tide of misinformation. There’s just so much that proliferates online and can look credible at first glance. In the beauty industry specifically, many mainstream companies, including Procter & Gamble and Unilever, are acquiring clean brands in an “if you can’t beat ’em, join ’em” approach.

All this highlights the danger of allowing so-called harmless science-free information to proliferate unchecked. Across society, there’s the rise of anti-vaxx groups, climate-change deniers, 9/11 truthers, flat-Earthers, and other conspiracy theorists. Novakovich is careful not to label clean beauty a conspiracy theory but feels there’s an element of conspiratorial thinking to it—believing something when there’s no credible scientific evidence to support it, a process that’s accelerated and amplified online.

Diez says that “sometimes people look at me like I am just trying to defend the terrible things I’ve done! They believe that the large corporations are here to suck your money, poison you, and destroy the environment, and that the small companies with no scientists are there to save the world.”

Science education at school and online might help—teaching everyone about principles such as the dose makes the poison and regression to the mean, and conventions like peer review. The beauty industry can help too, through initiatives like Everything Is Chemicals.

“A lot of scientists follow us. A lot of businesses follow us,” Novakovich says, referencing her online science education community. “I talk to many scientists that work for brands that are frustrated with the way that their marketing is going and the disconnect between the marketing and the science department.”

Finally, there’s the media, which loves its splashy, simplistic headlines about the stark dangers of this and that and is looking for dramatic storylines—even if there’s not a lot to say, which makes a credible scientist’s job much harder.

“In the last 10 years or so, I have become ashamed to say I work in the cosmetics industry,” Diez says. “It is now a degraded profession. Everything is okay for as long as you can market it. That is the approach—it doesn’t matter if it is a lie.”