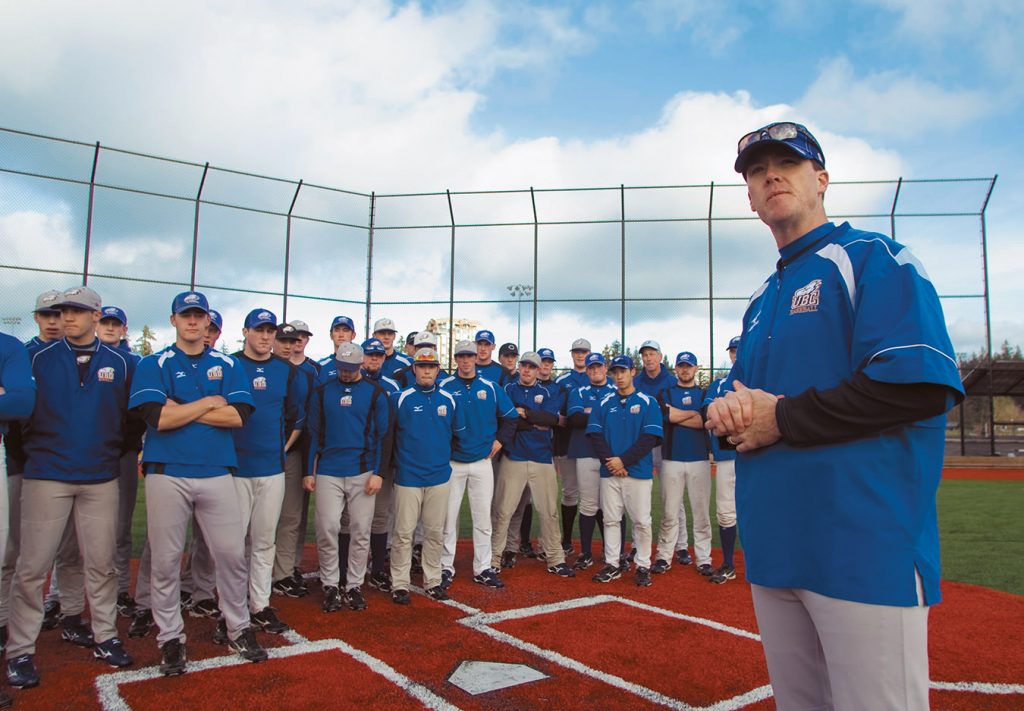 “If You Build It, he will come.” To the logically thinking bystander, the words penned by W.P. Kinsella provide a rationale for constructing the University of British Columbia‘s (UBC) very own field of dreams at the Point Grey campus. While that would make for a convenient storyline here in Hollywood North, it turns out “he” proceeded “it”, which makes the tale all the more interesting.

They met in 1999. One was a novice head coach of a relatively unknown baseball program; the other, an unrefined but undisputed talent. When Terry McKaig received a commitment from Jeff Francis that summer, he could not have foreseen the enormous effect that decision would have a mere decade later. The relatively inexperienced McKaig and his Thunderbirds landed the North Delta hurler just prior to their probationary season in the National Asociation of Intercollegiate Athletics (NAIA), in which they still compete. Francis had been pursued by well-known schools south of the border, but settled on UBC once a hefty scholarship offered elsewhere was pulled off the table.

Not three years later, Francis was taken ninth overall in the Major League draft. He and fellow Lower Mainland resident Adam Loewen made baseball history as the first Canadians to be drafted in the top 10. While Loewen struggled to live up to his lofty potential, Francis immediately flourished in the minors. His success quickly paved the way to the big leagues, and just over two years after his final game as starting pitcher for the T-birds, the skillful southpaw was pitching for the Colorado Rockies.

People started to take notice of this upstart program on Canada’s left coast. “It was one thing for him to be drafted that high,” explains McKaig, “but cracking Colorado’s starting rotation was the key.” All of a sudden the light bulb went on for prospects that had previously considered UBC an afterthought. “They realized that if they were good enough, the pro clubs would find them—even up here in Vancouver,” grins McKaig, who has seen at least one of his players selected in seven of the past nine drafts.

As interest in his alma mater began to take off, so did Francis’s career. The lanky lefty started 99 games over the next three seasons, racking up a career-high 17 wins in 2007. He also graced the cover of Sports Illustrated after helping hurl the Rockies into the World Series that year. Francis opened Colorado’s first two playoff series with victories, and was named the Rockies’ starter for game one of the Fall Classic against the Boston Red Sox.

Now the calls began pouring in from as far away as Florida. Recruits wanted to know more about the program that had produced a starting pitcher in the World Series. Parents wanted to know if the T-birds would consider their child, already fully aware of UBC’s esteemed academic reputation. Suddenly the cleat was on the other foot now that the blue-chippers, whom McKaig had once been fighting to convince, were actively competing for an offer.

Francis is as humble as he is talented. “That program did at least as much for me as I did for it,” contends the thoughtful 28-year-old. “They gave me a chance to play university baseball and get drafted.” He is far too intelligent to be oblivious to his impact; after all, he is a physics major. But his modesty may prevent him from digesting the scope of his influence. Francis generated an unprecedented amount of media attention for his school’s program during his draft year, and the higher-ups at UBC noticed. For the first time, there was internal pressure to ensure that baseball was provided the proper resources for success. The magnitude of the moment also resonated within the B.C. baseball fraternity. Coaches who had viewed the program as little more than a novelty began to see it as a viable alternative for their most prized pupils. A junior college in Texas no longer presented a better opportunity than enrolling on home soil.

Though Nat Bailey has been a more-than-hospitable home stadium, Thunderbird Park represents tangible progress for a program that has improved substantially since Francis departed. The new all-weather field on campus is a far cry from the gymnasium in which the team was accustomed to practising, and should only enhance the squad’s annual performance. UBC has become a perennial contender in the NAIA, due in large part to the resulting upgrade in overall talent.

The coach will credit the player. The player will credit the coach. Neither will accept the other’s claim. The truth is provided by each summer’s new crop. Because you built it, we will come.