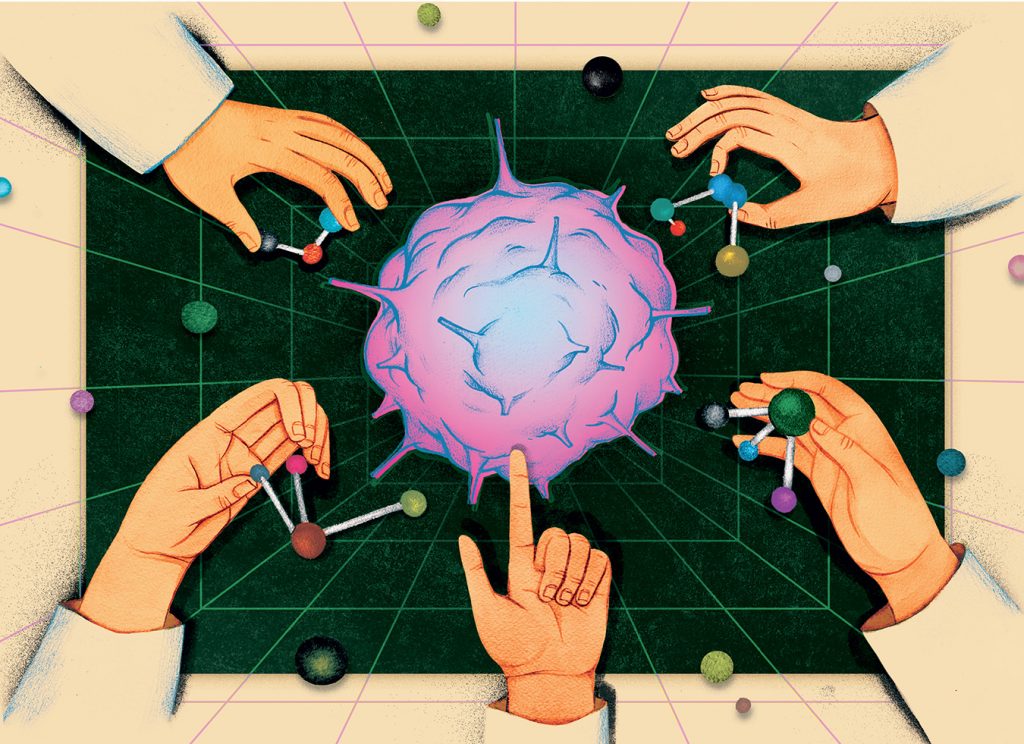 Dr. Artem Cherkasov sees things. Patterns. Possibilities. Ideas. The kinds of things that can save lives, make fortunes, and utterly transform the world.

Not that you’d know it from his business card: Associate Professor with the UBC Department of Urologic Sciences and Senior Research Scientist with the Vancouver Prostate Centre. Sure, it’s descriptive enough. But it somehow fails to do justice to Cherkasov’s job as one of the world’s premier researchers in computer-aided drug design—a job that mixes chemistry, molecular biology, and computer science with a fair bit of fortune telling and anarchist philosophy thrown in for good measure.

“For thousands of years, people tried to heal, cure, treat themselves with something,” Cherkasov explains. “They would take something from nature, chew it, chop it, and put it on top of themselves or inside of themselves.” Needless to say, such chemical guesswork is grossly inefficient. “Empirically, you would end up with a probability of success of 0.03 per cent, and that something would have all kinds of strings attached.”

Computers offer a way out of this game of trial and error. When he goes to work, Cherkasov doesn’t grab an Erlenmeyer flask and a petri dish—he dons his 3-D glasses and fires up his desktop. Floating in the air between his eyes and his oversized monitor is a projection of components of cancer cells. He spins, twists, and rotates cancer-related proteins in virtual space, searching for bumps, grooves, and cavities through which the cell can accommodate certain compounds necessary to accomplish specific functions. He finds one and then starts the hunt for a specific molecule to clog, block, or plug the vulnerability, thereby disrupting the cancer cell’s ability to multiply and spread.

It’s not all that different from what a locksmith does with a door. “You have to have a perfect key,” Cherkasov explains. “To do that empirically—to hope that there is something out there in nature that perfectly fits your lock—it’s not a very high chance. Yet when we know exactly what we’re looking for, we design the perfect key, we develop it, and bingo.

“We look in our simulation for a ‘perfect’ molecule. Once we are certain what it would look like, we either go and get something very similar from nature or we synthesize the molecule we want. We have on file about 50 million molecules we can buy from vendors or readily synthesize. Out of 50 million, we usually pick up five we think will work, and we go and buy them. You just test dozens of molecules, not millions like big pharma would do. You buy five for a few hundred bucks, you test them, and a couple of them actually work.”

As he explains, success rates are several orders of magnitude higher than in empirical drug research. “We can see it at an atomic level, so we can really understand which atom does what,” Cherkasov says. “We really don’t miss that much, because we already know exactly what we are looking for.”

Breakthrough, cutting-edge, revolutionary—it’s tough to hyperbolize about his work. By making drug discovery virtual, Cherkasov has eliminated the financial barrier to pharmaceutical research. The implications of that are sure to be as wide-ranging as they are long-lasting.

Example: computers make it economically feasible for universities (which tend to be intellectually rich but cash-poor) to get into the game. No longer does a school need to invest in a multibillion-dollar research lab to do early-stage R&D: in principle, a high-end package from Best Buy will do just fine. “It makes it very possible to do drug discovery in academia,” Cherkasov says with enthusiasm.

Freed from the shackles of return on investment, universities can now undertake a serious search for drug candidates for so-called orphan diseases—rare conditions that have until now simply been unprofitable for big pharma to spend its dollars trying to cure. “For them, if it doesn’t work right away, they change projects and try some other low-hanging fruit,” Cherkasov says. “For us, we have the luxury of trying it as long as we believe in it.”

As he explains, one of the most intriguing possibilities of computer-aided drug design is the opportunity to create personalized treatments: drug molecules that have been specifically created for you, for me, for the guy who brews your morning Americano. “Now with each patient, we can take a tumour out and analyze what’s in there on a genomics level,” Cherkasov says. “That gives us the possibility to understand exactly what’s wrong.”

Think of that for a moment: with only a fraction of the budget of big pharma, Cherkasov and his team can design dozens, perhaps hundreds, of prototype drugs—for an individual patient if need be—and predict the efficacy of each with reasonable accuracy. “We make it cheap and we make it fast. And we make it different,” he says.

This last point bears repeating. Cherkasov’s 3-D glasses are the ultimate weapon in the war against cancer (or any disease), giving him the ability to scrutinize his enemy’s defences and identify points of weakness that haven’t been attacked before. Once found, he finds another. And another. And one more after that. In this way, it’s possible to create entirely new drug targets before the cell even develops resistance. “Cancer is a smart guy,” says Cherkasov. “But if cancer will adapt there, we’ll come up with a different angle. We’re always ahead of the game.”

This, in large part, is the reason why the Canadian Cancer Society gave Cherkasov a $1.2-million grant this past September: to investigate an entirely new way to attack cancer, one based on direct shutdown of DNA reading by cancer cells. “That’s such a brutal interference with very fundamental molecular mechanisms of cancer that it will be very difficult for the disease to adapt to it,” Cherkasov explains. “It opens a whole new page, a whole new way. It gives us a way to treat all kinds of cancer, and all resistant shapes and ‘flavours’ of it.”

He lets that last sentence hang for just a moment. He doesn’t use the word cure—it’s way too early, and there are too many unknowns and too much work to do between now and then. But he doesn’t have to. You can see it in his eyes.