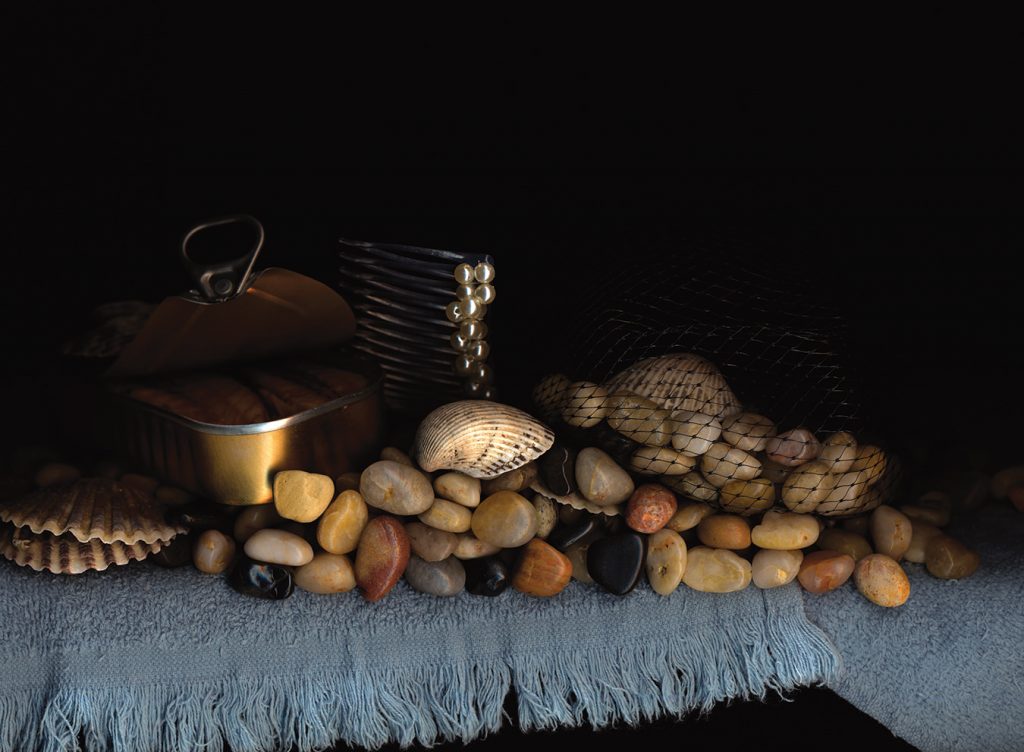 The Vancouver School of conceptual photography is comprised of a group of artists who, in the 1980s, forever changed the face of photography. While Roy Arden, Jeff Wall, Stan Douglas, Ian Wallace and Rodney Graham may not agree with the classification they’ve been given—Arden recently referred to the term as a “silly label”—they certainly have a lot of pupils. Today, Vancouver has become quite well known for its photographers. Of them, Evan Lee is one of the more painterly.

Lee began his BFA at the University of British Columbia with the study of painting and drawing. “I’ve never trusted photography,” admits Lee. “Somehow there were a lot of questions about the medium. It wasn’t for me to just go out and take pictures of things.” But somewhere along the line, Lee’s interests shifted—one might credit Jeff Wall, his instructor and then employer for 10 years, for the change of tune.

The recent series Still Life with Stones, Shells, Fish and Comb ($5) is a modern take on the still lifes of lavish feasts and luxury objects of the 17th century, by Dutch Golden Age painters such as Willem Claeszoon Heda and Jan Davidszoon de Heem. Lee’s twist is that his still life objects were all purchased at a dollar store. Using cheap, plastic, mass-produced items, Lee still manages to make each image look opulent. Perhaps most surprising is that the artist’s still lifes are not photographed at all, but rather scanned by a basic office scanner. “The scanner catches depth and lighting, and it creates focus and perspective.” While some may balk and argue that this is not photography, Lee insists that it is. “In some ways,” he says, “just letting the objects be exposed is more like fundamental photography than photography itself.”

Lee’s end result may come by chance but he still maintains control of his subjects. His Ginseng Root Study is a series of scanned images of the prized Chinese herb, each specimen selected for its freakish appearance (even Lee admits to looking for the “mutants” of the ginseng world). Once scanned in high resolution, the roots become characters: shriveled up old men, suspended, alone, and in the dark.

Lee’s newest project involves recreating a 50-year-old set from his father’s amateur photography class, and is his most ambitious work to date. “This new work is also a new approach for me,” he says. “I have to talk about it more versus it being just about the images.” Spoken like a true graduate of the Vancouver School.