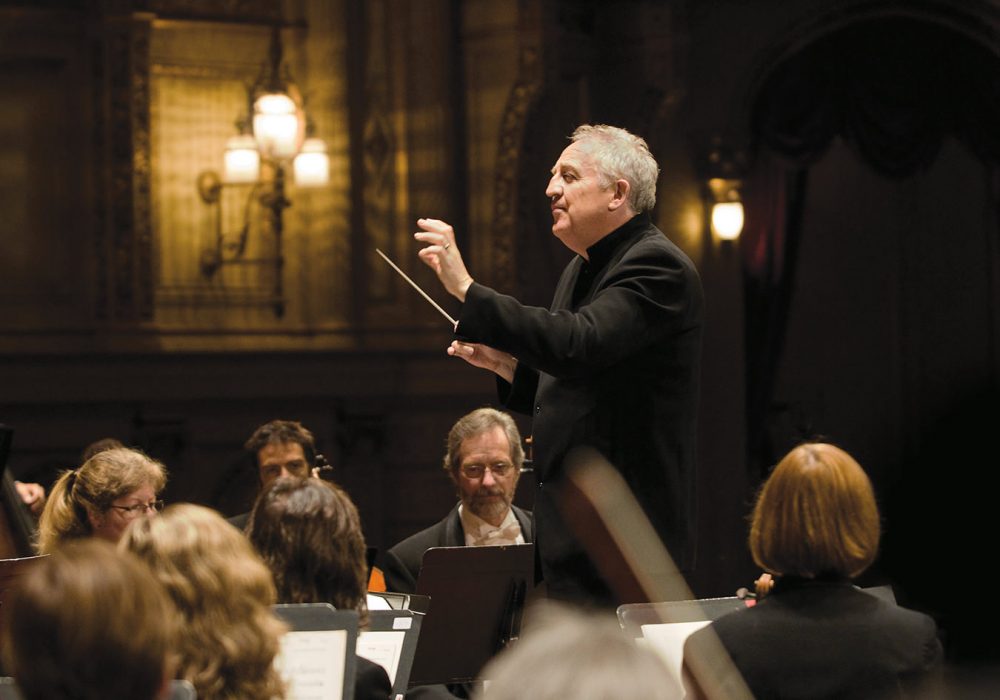 It’s five days before Christmas, and Bramwell Tovey, music director of the Vancouver Symphony Orchestra (VSO), is doing his usual mad version of a gifted musician’s multi-tasking. Having just conducted 13 Christmas concerts over nine days throughout the Lower Mainland, all to full houses, he is working from home at his Kerrisdale residence. His wife, Lana, has gone gift shopping, and has left her husband to keep an eye on his two daughters, 12-year-old Jessica and 10-year-old Emmeline, while he fleshes out the full orchestral score of his new full-length opera, The Inventor, which would go on to premiere in Calgary a month later. Competing for everyone’s attention is the family’s cavalier King Charles spaniel, grandly named Lord Spencer. But far from appearing frazzled, Tovey seems almost blissfully content. Over the heads of his children, he has a lovely view of Cypress Mountain, and the work on his opera is progressing well. All seems right—very right—with his world.

Now in his 11th season as VSO music director, Bramwell Tovey’s work life is a harmonious counterpoint of living in a city he loves. While orchestras are struggling to survive in many other cities, the VSO has never been healthier. After his first three years of overcoming a seven-figure deficit, Tovey points with pride to having just finished “our seventh-straight deficit-free season. Our audience base has grown and prospered—it’s jolly healthy here in Vancouver!” While many orchestras can only dream of touring these days, in the fall of 2008, Tovey and the VSO toured South Korea and then China—the first Canadian orchestra to do so in 30 years. Earlier that same year, the orchestra won a coveted Grammy Award for its superb recording of concertos by Korngold, Barber and Walton with violinist James Ehnes, beating out other orchestras from Berlin and Paris.

Wherever there is such success in the arts, look for the leadership that sets the vision and executes it. Tovey is quick to credit the orchestra’s CEO Jeff Alexander (“a brilliant orchestra manager”) and board chair Art Willms with the VSO’s success. Together, they have been a steady and inspired triumvirate at the helm for the past decade, and it shows.

But Tovey is the man in the spotlight, who has galvanized an entire city with his personality and talent. He is the very model of a modern orchestral maestro, although that rather formal Old World “master” title doesn’t really seem to fit. Not only is he a supremely gifted conductor and music director, a much published composer, a pianist (classical and jazz) and a dreamer of big projects, he is also the bearer of a fantastic sense of humour. If Tovey ever loses his night job, he could easily make a living as a stand-up comedian. His wit onstage hosting concerts is legendary and he has always been a favourite of the media. He was once asked in a CBC Radio interview if he didn’t think that Tchaikovsky, who wrote all those beautiful waltzes for his ballets, wasn’t in fact a better composer of waltzes than Johann Strauss Jr., and shouldn’t Tchaikovsky in fact be called the Waltz King instead? Without batting an eye, Tovey (referencing Tchaikovsky’s homosexuality) responded, “Well, I prefer to think of him as the Waltz Queen!”

He is equally funny describing his own role on the podium. “A conductor is most visible when presenting his back to the people who have paid to see him,” he says. “It’s actually fortunate for me, given my being so cosmetically challenged.” Tovey is winningly self-deprecating about his physical presence, but while you may never mistake him for Cary Grant, there is an animating life and spirit in Tovey that makes him as sexy as the Angelinos who flock to hear him conduct at the Hollywood Bowl.

It is in fact all of these qualities that have made him what Baltimore Sun critic Tim Smith called “the hottest hot-weather conductor in America right now.” In addition to being principal guest conductor of the Los Angeles Philharmonic at the Hollywood Bowl, he is also host and music director of the Summertime Classics for the New York Philharmonic at Avery Fisher Hall. But beneath the flash wit and the quick tongue is a very serious musician, who, in addition to his full-time gig with the VSO, conducts major classical repertoire for these and other orchestras the world over. He is a charismatic champion of classical and contemporary music, having successfully launched a new music festival with the Winnipeg Symphonic Orchestra while music director there.

Tovey’s latest dream is about to become a reality on the site of the old Capitol 6 Theatre just north of the Orpheum on Seymour Street. It’s the new VSO School of Music—an inspired creative-commercial partnership with Bruno Wall of the Wall Financial Corporation. Here, the symphony will inhabit four floors of classrooms, practice studios, performance spaces, a recital hall and the latest in technical facilities for recording and video conferencing. Rising above the school is a luxury condominium tower. The school, Tovey says proudly, will be open to everyone: “From the cradle to the grave—but no decomposers,” he adds with a laugh. The new music school reflects Tovey’s passion for community music education and his determination to leave a lasting legacy for the city he loves.

Tovey’s current contract with the VSO runs through until June 2015, by which time he will have been music director for 15 years. Unfortunately, music directors don’t stay forever, even where their tenures have been as successful as Tovey’s has. But still, the love affair between him and Vancouver shows no signs of flagging. Besides, “Lana would murder me if I ever said we would move,” he confesses. Relief comes in knowing he won’t have to face that decision any time soon.