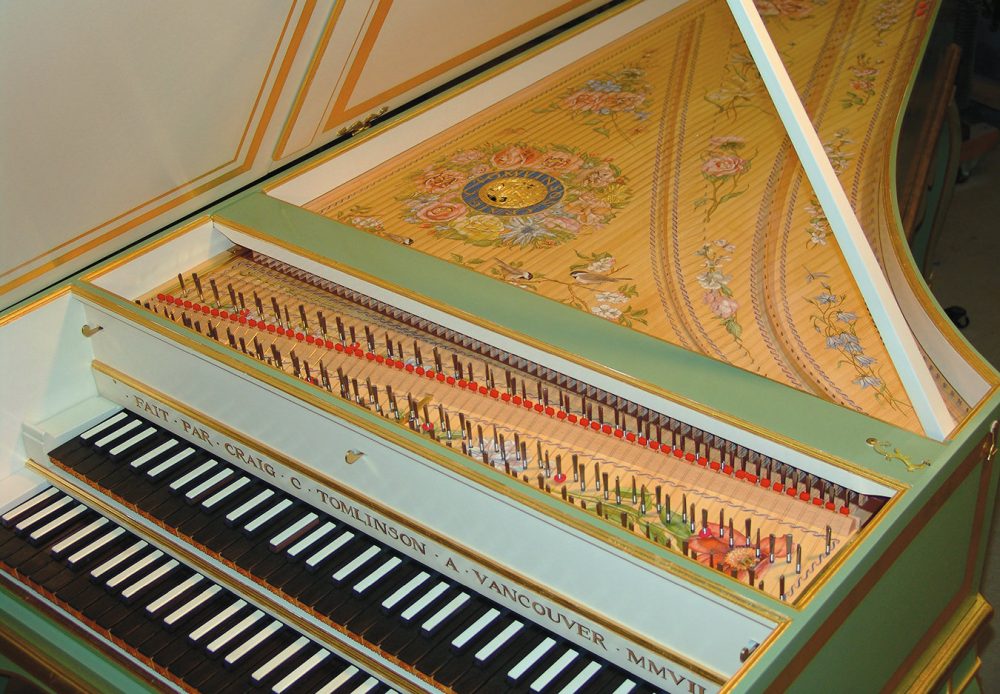 Detail of a French two-manual harpsichord.

While most 16-year-olds were whittling away their youth on frivolities, Craig Tomlinson began his career building traditional instruments. His first, a dulcimer, took four months to make, but before long he’d filed that time down to four days and craved a bigger challenge. The rest, as they say, is history.

Constructing harpsichords has been Tomlinson’s passion for the past 35 years, but the instrument long precedes him. The harpsichord’s plucked strings and exterior embellishments typify the sound and opulence of the Renaissance and Baroque periods. And though the instrument fell out of favour in the late 18th century (it was eclipsed by the piano), it has found new life in modern performances of classical repertoire, in new compositions and in novelty inclusion in popular music ranging from Simon and Garfunkel folk to Cypress Hill hip hop.

The transition from dulcimers to harpsichords came fortuitously for Tomlinson when he shared a flat with friends in 1974, one of whom was Doreen Oke, a harpsichord instructor at the University of British Columbia. “She asked me to assemble some harpsichord kits for her students,” he says. “I did five or six of them, and I could really see where they were lacking.”

His eye for finely tuned craftsmanship led him to Berkley, California, for four years, where he had the opportunity to work with harpsichord builder John Phillips. He eventually charted his own course, travelling to various museums and collections throughout Europe—from Paris to London, Edinburgh, Berlin, Amsterdam and Antwerp—where he would photograph and blueprint original French, Flemish and German harpsichord designs, including his personal favourite, the 1769 double-manual harpsichord made by Pascal Taskin. In a humidity-controlled studio behind his West Vancouver home, Tomlinson replicates these harpsichords of yore, along with its cousins the clavichord, the virginals and the fortepiano. He does so with the precision of a neurosurgeon and finesse of an Old World artist. The process takes four months, or roughly 1,000 hours. Cases are fashioned out of yellow poplar and oak. The soundboards are made of German spruce from a 21-year-old stash bought in a small Bavarian town—the same small Bavarian town that supplies Steinway pianos. They are prepped and then sent to his mother, Olga, a painter in Lone Butte, B.C., for decoration. The Swiss pear jacks for plucking are fitted with tongues made from the remnants of a holly tree, the only local wood he uses, supplied by the city of West Vancouver and coming from a park just two blocks away.

Clientele for Tomlinson’s harpsichords include both professionals and appreciators alike. The Vancouver Symphony Orchestra and Vancouver Opera both use his harpsichords in performances, and collectors often purchase them for a historical perspective on music. “If you play Bach, you really have to [play on a harpsichord], unless you want to sound like Glenn Gould. Bach on a piano is completely different from Bach on a harpsichord,” Tomlinson says. He also points out, “You really only have 250 years of piano music written. The rest, before that, is harpsichord music.”

At the hand of great musicians, whether rehearsing in their living room’s or performing on stage, Tomlinson’s instruments have met the rigours of the most challenging fugues and fantasias. He remembers watching harpsichordist Paul Dyer of the Australian Baroque Orchestra tackle the fast cadenza of the Fifth Brandenburg Concerto. “He saw me in the audience and just kind of rubbed the side of the harpsichord,” Tomlinson says. A subtle, yet meaningful sign of approval.

Although arguably already at the top of his profession, Tomlinson still searches for ways to perfect his process, and he doesn’t show any sign of slowing down. “I can’t really see myself doing anything in retirement other than what I’m doing right now,” he says, adding that Italian luthier Antonio Stradivari “apparently started making his best instruments after he was 80.”