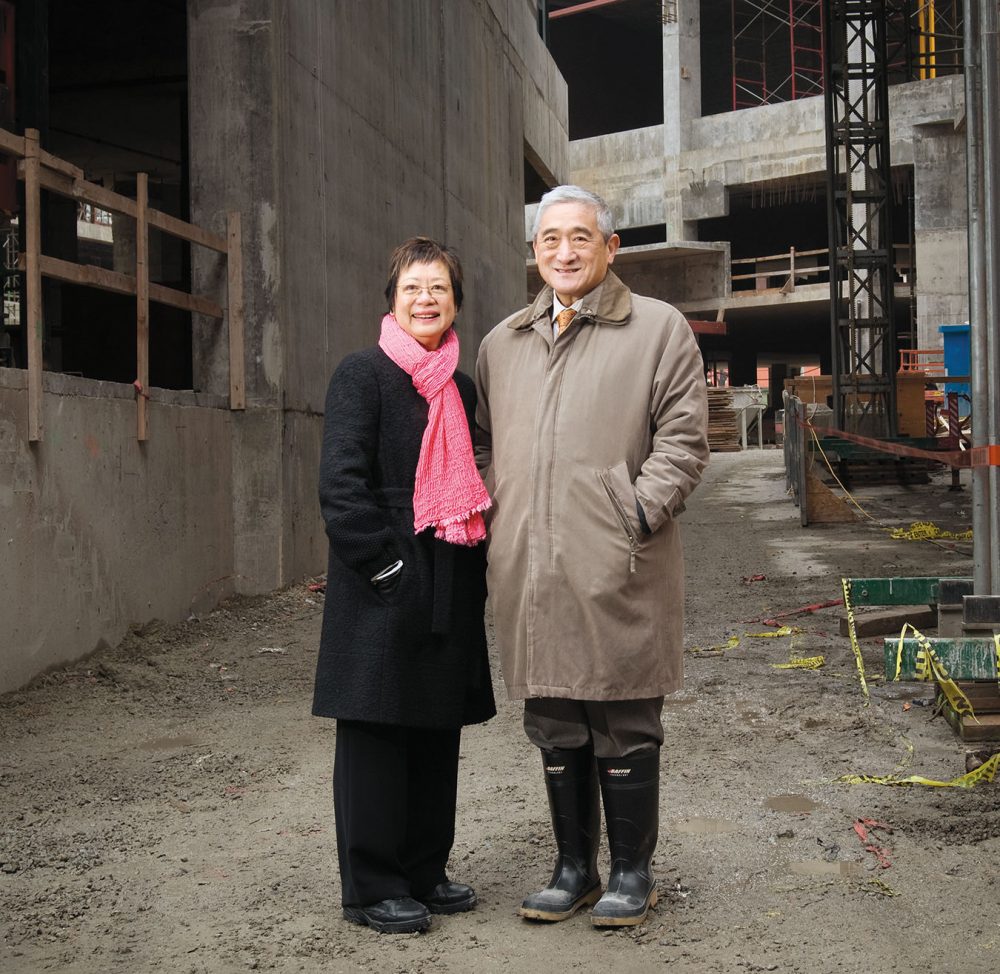 Fei and Milton Wong at the site of SFU Woodward’s, prior to completion. Photo: Simon Fraser University.

Kind eyes and a warm smile are the first things someone might notice when meeting Milton Wong. For a man in his 70s, he is fit and graceful. At a glance, it would be hard to guess that this humble man has earned prestigious awards, accolades and honours such as receiving the Order of Canada, co-founding the Laurier Institution and, most recently, holding the position of Chancellor at Simon Fraser University for six years. In conversation, he is a keen listener, and when he speaks, his thoughts are passionate and well-spoken. One of his favourite topics to discuss is his unwavering love for his birthplace and hometown, Vancouver.

“As a child, I lived in Chinatown,” remembers Mr. Wong, the eighth of nine children. Without hesitation, he credits his older sister Anna as his “first and most important mentor. She is an artist and gave me another lens with which to see life. She is a huge inspiration to me,” he says. “At the time, City Hall called the area that we lived in a slum and wanted to tear it down. But it was vibrant, colourful, and we were a part of making it that way. Businesses in the area were owned by people of all backgrounds, cultures and religions. Diversity was a part of our lives from that time.” Mr. Wong credits this early exposure to diversity as something that shaped the rest of his life.

One of his proudest accomplishments is the co-creation of the Canadian International Dragon Boat Festival in 1989 with his friend the late David Lam. It has since flourished into one of British Columbia’s most well-loved festivals, featuring a love of the sport and diverse ethnic food and dance. “As Vancouverites, we have values that bind us together and make us more alike than we think,” says Mr. Wong. Living in a pluralistic community is about moving beyond tolerance to fully understand and embrace people and their cultures. “In Vancouver, the way we treat one another, do business with one another, respect and attempt to grow with one another is a great example of a city that has grown into a strong sense of fairness. It’s part of the reason I love it here so much,” he says.

Take, for example, the Building Community Society, a small group of leaders in business, planning, development, architecture and activism, Mr. Wong chairs. Their mandate is not only to generate affordable housing in the Downtown Eastside, but to recognize homelessness as a reality in our community, engage with the people affected by it, learn from them and implement genuinely beneficial solutions for the community.

Mr. Wong and his wife, Fei, are also great supporters of the arts, and in 2009, the Wongs’ philanthropic contributions inspired SFU to name one of their newest art venues the Fei and Milton Wong Experimental Theatre in their honour. “The arts are a huge influence on social behaviour,” Mr. Wong says. “Music, dance and so on are a common language that people can relate to. It gives expression and indicates a respect for culture.” Located at SFU Woodward’s in Gastown, the Wongs are excited about the range and quality of cultural activities this theatre will bring to the surrounding area. “I think we have been for some time now developing a really Vancouver-centric art style and personality,” Mr. Wong says. “We are claiming this for ourselves. It is a glowing example of our creativity and ability to change.”

For a moment, there is reflection, and then Mr. Wong leans forward and shares his final thought. “It takes not only discussion and dialogue, but involvement and stewardship to make change. Not only involvement in the heavy and serious things like policy making, but also in the joyful things like celebrating one another’s cultures and traditions. The evolution of how we look at ourselves is the exciting part. There is so much possibility in what Vancouver has yet to become.”