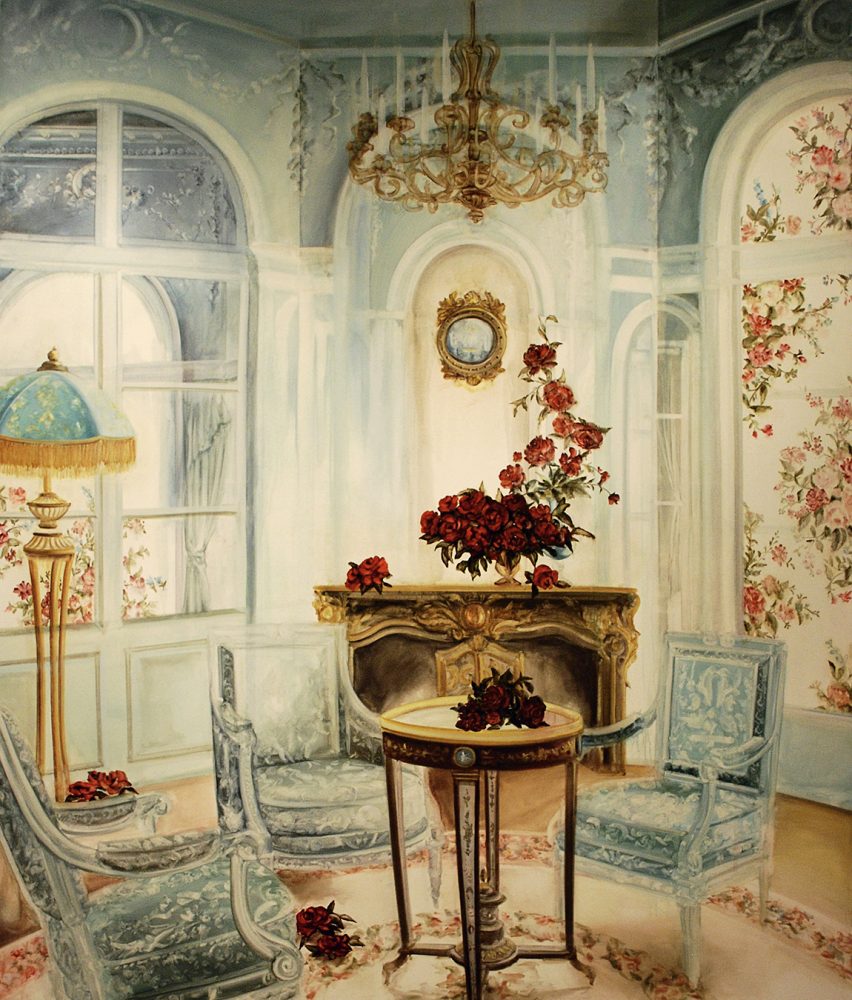 Artist Kathy Zhang is in her studio surrounded by canvases, completed works, drop cloths, and more than a few easels. Although she shares the long, narrow Gastown space with five other artists, she has plenty of room to create her large format paintings.

She sits next to a blank canvas and considers her next move. A simple brush stroke—or is it something more? Zhang is at the beginning of her career as an artist and so far things look promising. As the 2010 recipient of the Mary Plumb Blade Award for painting in her graduating year from Emily Carr University of Art + Design, Zhang was invited to participate in a group show at Vancouver’s Winsor Gallery in 2010, followed by a feature exhibition there in 2011. Internationally, she is represented by Ian Tan Gallery in Hong Kong. Not bad for a 23-year-old who, only shortly before moving to Vancouver in 2006 to attend university, decided she wanted to become an artist. It was a high school teacher who piqued her interest in pursuing an education in the arts. “He structured our high school art classes like they were a university course,” says Zhang, and she wanted more.

By the time she was in her second year at Emily Carr, Zhang had found the subject matter she is still exploring five years later. And although Zhang’s work can easily be called things of beauty, her elaborate realist paintings of ornate home interiors find a comfortable milieu in this city, where the artistic practice is often laden with critical theory and conceptualism.

Her work, she explains, is very much informed by places like the Palace of Versailles, which she visited in 2009, but the actual images she paints come from modern architectural magazines like The World of Interiors and Architectural Digest. It’s the incongruous contrasts found in their pages that Zhang finds so intriguing. “Amongst all of this highly modernist grey slate, these big windows and sharp edges, there’s a lot of throwback references to old, ornate interiors,” she says. “What I find interesting is the resurgence of rococo motifs—the sense of glamour and wealth from a place like Versailles, emulated in these contemporary spaces centuries later.” Incredibly, Zhang’s lifelike paintings are not drawn or mapped out in advance, a practice that’s quite common when painting from photographs. Her ability to paint from sheer observation is remarkable. “I’ve never been very interested in abstraction,” she says. “I find it too difficult for me. But I get a real sense of satisfaction from making a good image or a solid line or shape that’s quite descriptive.”

Despite being taken from real-life interiors, it’s the lack of reality in these spaces that captures Zhang’s imagination. It’s also the reason she insists on steering clear of being too pretty with her technique. “These beautiful ideas never really existed the way we wanted them to. In Versailles, the palace itself was disgusting. It’s all illusion, and that’s why I like painting it,” she says. While one doesn’t typically think of chamber pots being emptied out of the palace’s windows, the practice was commonplace at the height of palace use. It’s the artifice of it all that Zhang finds fascinating, and as we see in her paintings, she captures the wistful romanticism and fantasy people have for times that, she says, were hardly a reality.

Zhang has also been interested in exploring the use of a monkey as a stand-in for the human figure, a common allegorical theme throughout art history, and something she has incorporated into some of her early studies. “The monkey, in my mind, grounds itself in the space. You can understand why it’s there, even if it seems absurd,” she says. Zhang is also using more floral elements in her new works, though instead of being placed in a tableside vase, they float surreally across the canvas, deceiving the eye as they blend in with the decorative flourishes of the room.

Zhang has also been thinking of experimenting with themes of chinoiserie, the appropriation of oriental decorative styles in Western art during the 17th and 18th centuries. “I think what drew me initially to this notion was the aesthetic beauty—bird motifs, blue porcelain patterns, Japanese fans, and Chinese portraits,” Zhang says. “And then I noticed it began reoccurring in home decor images. There is a rich history of interaction between Europe and the East, but chinoiserie was born from general misunderstandings and an indiscriminate adoption of styles, patterns, and decor that have no real relation to a specifically defined society—more to an ideal depiction of some ‘mythical’ Orient. Beauty was more valuable than any authentic representation.”

How this will specifically present itself in her art is something Zhang is still working through, but whatever avenues she decides to explore next, it’s clear she has a long career ahead of her. But even with the possibility of applying to grad school also in the back of her mind, Zhang hints that her parents are still wondering when she plans to go out and find a “grown-up job”. Let’s just hope Zhang allows herself more time in the fantasy world.