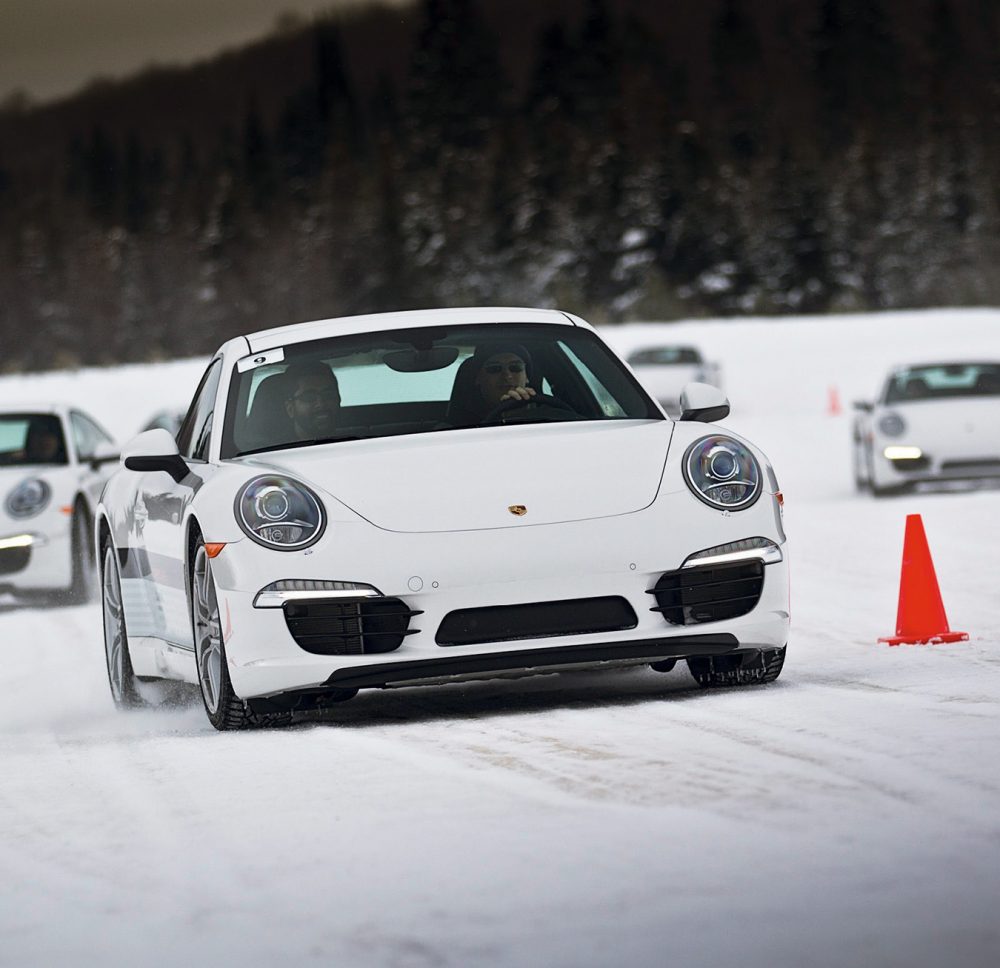 I have a confession to make: I love car commercials. Specifically, I love the ones where drivers perform impressive feats—like throwing a car around a curve at breakneck speeds—behind the wheel of 300-plus-horsepower sports cars. At the bottom of the screen in mice type you’re always told, “Do not attempt. Professional driver on a closed course.” But yes, I always think, I want to attempt. I really, really do.

With that in mind I arrive at Porsche Camp4 Canada, a three-day driving experience on ice and snow that defies the conventional wisdom dictating that high-performance sports cars should be garaged for the winter. Porsche thinks otherwise. Its cars are engineered for all weather, 365 days of the year. After all, it does snow on the Autobahn.

The base for the event is the Estérel Suites, Spa & Lake, a resort surrounded by shores and forests 90 minutes outside of Montreal. It’s a freezing, moonless night when I, and a dozen other auto geeks, arrive and, later, talk around the dinner table focuses on, what else, driving. But, snow-driving proficiency—or owning a Porsche, for that matter—are not prerequisites for Camp4. Indeed, the goal of the program is for Porsche’s team of skilled pros to train our muscle memory for emergency situations and teach us how to drive with precision in what may be one of the most treacherous driving conditions: the Canadian winter. The best way to get through the season, the German automaker enthuses, is sideways.

The next morning, eager to carve through the snow, we head to Mécaglisse, a dedicated snow- and ice-driving winter track, where a fleet of Porsche vehicles await us, including the Cayman S, 911 Carrera 4S Cabriolet and all-new 911 Carrera S (991). Paired with another driver, I jump behind the wheel of a 911 Carrera 4S for our first exercise, which calls for going around in a seemingly simple circle to learn the basics of understeering (going too fast into the curve) and oversteering (pressing too hard on the accelerator). “The true art of car control,” we’re told, “is felt in an unstable way of driving.” In other words, we are encouraged to lose control of the car, letting it spin, skid and slip in this safe, secured environment.

Over the two-way radio installed in the car, the instructor tells me to accelerate sharply, to set the rear sideways, and then maintain and control the state with counter-steering, correct viewing, and accelerator control. Conversely, my driving partner, next at the wheel, takes an impromptu lesson in understeering after taking a turn too fast. The front tires lose grip and cause the vehicle to turn only slightly or not at all; steering the wheel further, which is what most people intuitively do, makes the front tires slip even more. And then it hits me. Learning proper driving techniques is about ignoring your intuition, kind of like in that Seinfeld episode where George does the opposite of what he thinks he should to get the desired result.

“Exactly!” my instructor tells me. “Do the exercise over and over and your brain learns what to.” During another exercise behind a Cayman S, a rear-wheel drive vehicle with 320 horsepower, I redeem myself from earlier mistakes by doing near-perfect laps on an undulating course. “Look where you want to go and not at what you’re afraid of running into,” my instructor reminds me. I take my eyes off the looming snow bank, relax my grip and find I’m actually having a blast. Climbing and coming out of curves smoothly and in control, the Cayman performs with finesse. As the Porsche Camp4 Canada slogan goes: “never hibernate”. Nor shall I.