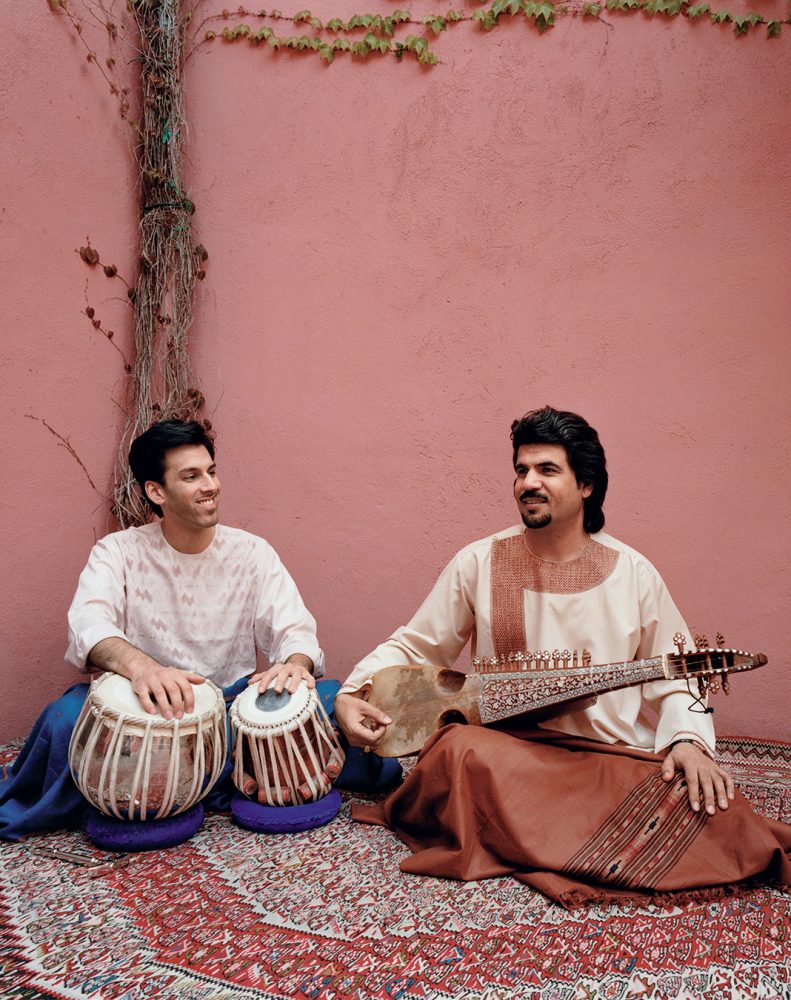 The hush at the Chan Centre for the Performing Arts is palpable. The lights are dim as people rustle with their programs and scan the stage, waiting for the musical journey they are about to take with the Homayun Sakhi Trio, and to be later accompanied by the world-famous Kronos Quartet. The low platform upon the stage is set. Three spaces for three musicians and their instruments: the rubab, tabla, and dorya. When the musicians enter wearing traditional garb, adorned with colourful scarves, anticipation fills the room. The three men walk barefoot toward their instruments and sit. They tune their instruments, breathe deeply, share a smile, and begin.

Homayun Sakhi breaks the silence with a few melodic notes on the stringed rubab, a traditional instrument of Afghanistan. After a moment, Sakhi nods at tabla player Salar Nader, and the traditional Indian hand drums softly join in. Then, a glance at the last musician, Abbos Kosimov, invites the dorya, a tambourine-like instrument from Uzbekistan, to enter the piece, and so the evening goes. The men play individually and collectively, gently and powerfully, playfully and seriously. They use their eyes to communicate tempo, direction, and respect for one another’s impressive solos. Their fingers move at lightning speed, performing tricky runs and masterful improvisations. Halfway through the concert, they are joined by the Kronos Quartet, who weave their celebrated modern strings in with the traditional music, taking the performance to new heights and eliciting a thunderous applause at the end of the evening.

The performance was a collaboration of the Aga Khan Music Initiative (AKMI) and the Chan Centre for the Performing Arts at the University of British Columbia. Its purpose was to foster musical and cultural dialogue and artistic exchange, and brought the traditional music of Central Asia together with contemporary Western sounds to make music that is tradition-inspired but not tradition-limited. As Fairouz Nishanova, director of the Geneva, Switzerland–based AKMI, explains, “The Chan Centre in Vancouver provides such a vibrant platform for students, art lovers, academics, and immigrant communities to experience art—allowing us the opportunity to reach out to many different audiences at the same time in one space. The richness of the community that calls the Chan Centre their home is an example of the pluralism that makes Canada so unique.”

Outside the concert hall, people stop by to embrace and thank her and to praise the evening in different languages. Between conversations, Nishanova continues to elaborate on why an event like the concert is about so much more than beautiful music. “It’s changing perceptions, it’s opening eyes, it’s feeding and nourishing the desire to learn. It’s breaking stereotypes and showing that traditional music can also become contemporary, thereby attracting new audience members and allowing it to live on and be supported. Investment in music education helps to develop cosmopolitan individuals who are knowledgeable about their own traditional art and culture, respectful and appreciative of art from other parts of the world, and curious about what dialogue between the two might yield.”

“The work in culture—such as what the Aga Khan Music Initiative focuses on—is important, because it recognizes that a community’s cultural assets are vitally important resources. They are expressions of identity which give people confidence.”

The Aga Khan Music Initiative is just one of many programs within the Aga Khan Trust for Culture, which itself is one of 11 agencies under the umbrella of the Aga Khan Development Network (AKDN). The AKDN website describes the 11 agencies within its collective as “private, international, non-denominational development organisations that work to improve the welfare and prospects of people in the developing world.” The agencies focus on environment, health, education, architecture, culture, microfinance, rural development, disaster reduction, the promotion of private-sector enterprise, and the revitalisation of historic cities. What makes this development network particularly unique is its focus on an equal balance between the economic, social, and cultural aspects of development.

Khalil Shariff is the CEO of Aga Khan Foundation Canada (AKFC) in Ottawa. It is one of the arms that help fund the AKDN’s many projects, and Shariff is deeply passionate about the network’s balanced approach. “We often ask ourselves, how do we help those in the developing world live in the realm of their traditions and still benefit from what the contemporary world has to offer?” Shariff emphasizes that the drivers of development are multipronged, and it is only when this complexity is respected that long-term change is possible. “The work in culture—such as what AKMI focuses on—is important, because it recognizes that a community’s cultural assets are vitally important resources. They are expressions of identity which give people confidence as they pursue a development path, and this is just as important as education and income earning,” Shariff says. Nishanova agrees: “Art is a way of passing down stories, keeping alive ancestral messages, and bringing a sense of validation to the culture’s importance, impact, and place in the world. It reaffirms the links between the past and present.”

To accomplish the goal of working with a respect for the complexity of development, the AKDN has a variety of projects in 30 countries around the globe (focusing on the poorest parts of Asia and Africa) and employs about 80,000 people. Many of these offices hire locals, allowing change and progress to be driven by those who will directly benefit from it. “Our hope is to empower developing nations to be self-sustainable—to be able to pursue their aspirations for themselves, for their communities and their countries, and eventually become contributors themselves,” Shariff says. Some of AKDN’s projects throughout Asia and Africa have included establishing microfinance banks to assist the growth of small business and to help natural disaster victims to rebuild; the creation of 325 health facilities, including nine full-service hospitals; the operation of more than 240 educational facilities from preschool to university—all with a focus on practical, quality education. Within Canada, the AKFC has created the Global Centre for Pluralism in Ottawa, a major new international centre for research and educational exchange, and is building an Aga Khan Museum in Toronto that will explore the intellectual, cultural, artistic, and religious heritage of Islamic communities. It is also continuing to work with the AKMI to increase its presence in Canada through regular arts presentations and university artists-in-residency programs, such as one in place at the University of Alberta.

While Shariff and many others within the network are passionate, hopeful, and driven, there is no sense of idealism around their goal to create a sustainable shift in developing communities around the world. Shariff acknowledges that change doesn’t happen overnight—or sometimes even in five or 10 years—but the determination to realize this goal is strong. The strength of the AKDN is in its people—their collective expertise and strong relationships. “We have major fundraising from corporate and individual donors all over the world,” says Shariff of the widespread support the network receives. “We work with all of the major foundations—Gates, Rockefeller, Ford, and all of the major development agencies like the Canadian International Development Agency and its equivalent in countries throughout Europe and the U.S. His Highness the Aga Khan, our founder and chairman, is of course a major donor as well. Through these collective contributions, all of our work is sustained.” AKDN projects are also supported by thousands of volunteers who give of their time locally and internationally, and Shariff calls them the backbone of the agencies. “Quite simply, we could not do what we do without them.”

One great example of the power of this volunteerism is the World Partnership Walk (WPW). “The WPW is Vancouver’s hallmark volunteer-created and volunteer-run event,” says Shariff of the annual charity walk that takes place at Lumberman’s Arch in Stanley Park each May. “It is almost 30 years old, happens in nine other cities across the country, and has raised close to $70-million since it began. All to support our work in the developing world.” In 2011, almost 40,000 Canadians came together to raise $6.8-million through the walk—$2-million of that raised in Vancouver. “The success of this event is a strong symbol of how Vancouverites commit to exercising leadership in the service of a better world for us all,” Shariff says.

Before the bustling crowd of the Chan Centre concert spills out onto the street, the musicians join them to laugh, celebrate, and answer questions about their work. As they excitedly exchange impressions of the performance, Sakhi shares a few thoughts in his soft Afghan accent. “My father said to me, ‘Homayun, always you play for yourself first. If you love it, they will love it. Simple.’ ” And with those words, he learned to trust himself as an artist, take risks, and be bold in his creation. “Making this music is my calling, my life work. Everybody has life work—not one’s more important than the other.”

And in that lies the very essence of the AKDN. A network of agencies that call on people to be their very best—in knowledge, collaboration, and creativity, so that lasting change can become possible on all levels. The message is that development is not simply about action, but also attitude. When every single person—from the young artist in Kyrgyzstan to the elderly volunteer in Vancouver—feels a sense of passion and connection to their efforts, the result becomes a shift from hopeful dreams to real change.