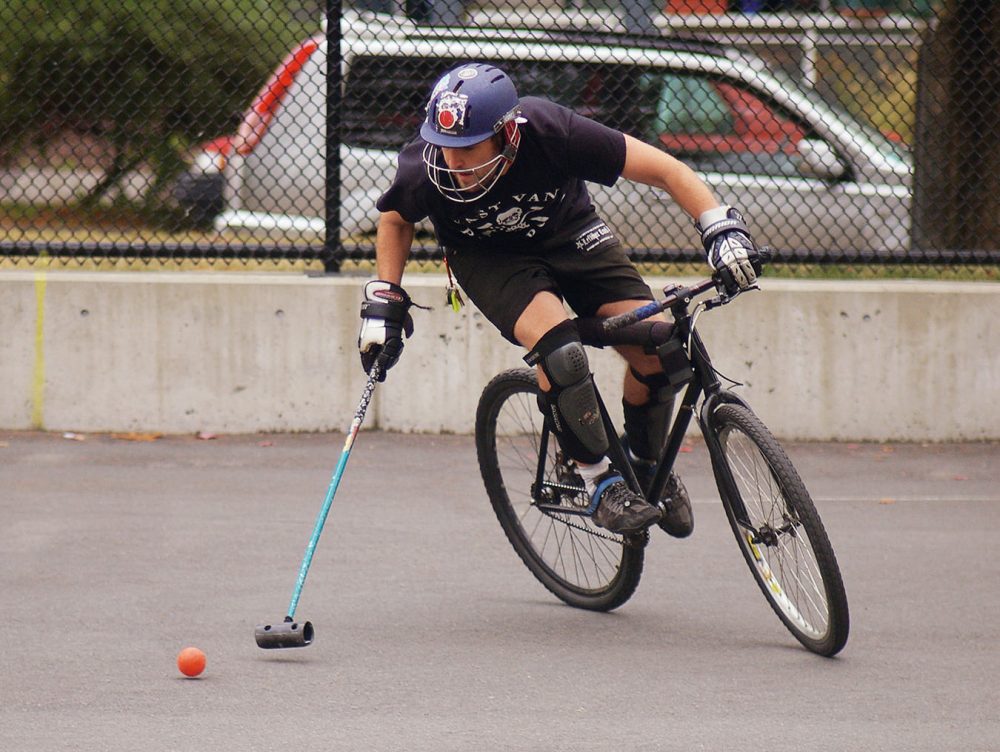 When a smartly dressed bike poloist, jockeying a well-kept and ornate Louis Vuitton custom bicycle, graced a photo in the December 2011 issue of Intersection magazine in France, the cycle polo community took note. With clean orange leather bootstraps hugging black suede shoes and unchipped chrome discreetly popping from the handle bars and chainrings, the imagery was quite clearly contrasted with the reality of the game played today. The series of photos depicted a broken down Toile Monogram, split across accessories that offered the buyer a lost historical connection of refinement between the urban hardcourt game and its aristocratic ancestry on grass and horseback. It tapped into the aspirations of a street sportsman seeking gentility, but keeping still with contemporary sensibilities. Set to the Count Five’s classic garage rock anthem, “Psychotic Reaction”, the short video posted online a year later captured the rugged refinement of the game that the designers at Louis Vuitton had seen. Still, the vibe of a Saturday hardcourt match in Vancouver’s Grandview Park on a humid spring afternoon is anything but this. And based on the Pacific Northwest roots of the sport, you’ll understand why that’s not a bad thing.

That same year was important to our local bike polo scene for two more important reasons than a collaboration with a high-end fashion house in a publication for distinguished automobile enthusiasts. Vancouver would be able to boast the world’s first dedicated hardcourt bike polo court, built to bike polo specifications. Located off Commercial Drive at Grandview Park, the $90,000 multi-use amenity was something to truly be proud of. Club members were actively involved in the overall park renewal project, and their well-organized approach helped get the bike polo court built. Also, members from the East Van Bike Polo Club, using the moniker Crazy Canucks, laid claim that year to the World Hardcourt Bike Polo Championship title, the highest honour in the sport. Then celebrating its fifth anniversary, the club was at the centre of one of the strongest polo communities in North America and at the apex of one of the fastest growing urban sports worldwide.

The earliest history of modern hardcourt bike polo can be traced back to the Pacific Northwest. The game first evolved as a pastime enjoyed by bike couriers in Seattle killing time between jobs. Played with makeshift mallets made from plastic PVC piping and aluminum cans, it was decidedly DIY. Cycle polo, played with bicycles on grass fields, however, traditionally dates back much further, to the turn of the 20th century. The first recorded match took place in 1891 in Ireland, and it quickly spread in popularity. The game was picked up as demonstration sport for the 1908 London Olympics, with the Irish team beating a German squad, before being unceremoniously dropped. Popularity ebbed and flowed throughout the following decades; however, the game as we know it today, played predominantly on concrete hockey rinks, lacrosse boxes, and tennis courts in cosmopolitan cities, is a breed of bike polo that can be described as uniquely Cascadian. With its roots, firmly planted here, its popularity has spread to over 48 countries and attracted players all over the world; it is estimated that there are currently between 15,000 to 17,000 players worldwide, growing at an astounding 50 per cent per year.

Perhaps what attracts so many players is that the rules are dead simple, the gear is reasonably accessible, and it’s surprisingly easy to play at an amateur level. Two teams of three players square off against each other, and the first team to five goals wins. In tournament play, though, it is timed. Players are not allowed to put their feet down, and if they do, called a “dab”, they must tap their mallets at centre court before continuing on. Body to body, mallet to mallet, and bike to bike contact are allowed; however, any other variation of contact is forbidden. Another notable rule: don’t be a dick. A bike, a mallet, gloves, and a helmet are all that you need to get going.

Polo has grown past its independent culture. There are now close to a dozen companies around the world making specialized products for the sport. One such company is Northern Standard, a young upstart equipment company founded by Vancouver entrepreneur and polo enthusiast Max Feldman. He is seeking to take early-mover status in the bike polo product scene and is recognized in the community as an innovator within the sport. “Our goal is to grow the sport globally but always focus on our love of the game and the inclusive, community spirit of bike polo,” he says. It is with this ethos that Northern Standard sponsored the 2011 world championship team, the Crazy Canucks, and continue to be strong advocates to this day.

Every weekend at Grandview Park and in co-opted spaces around the city, hardcourt bike polo is played in its truest form. Curled cargos and clenched gloved hands ready themselves for the next match. While waiting to play, poloists warm their hands with a hot cup of coffee or sneak sips from a hidden flask. Their laughs and tales shared around the court offer an unpretentious feel to every game. There’s openness to anyone who’s curious or interested. As grey skies give way to afternoon sun, it’s easy to wonder where the morning went and lose yourself in the West Coast’s unofficial blacktop sport.