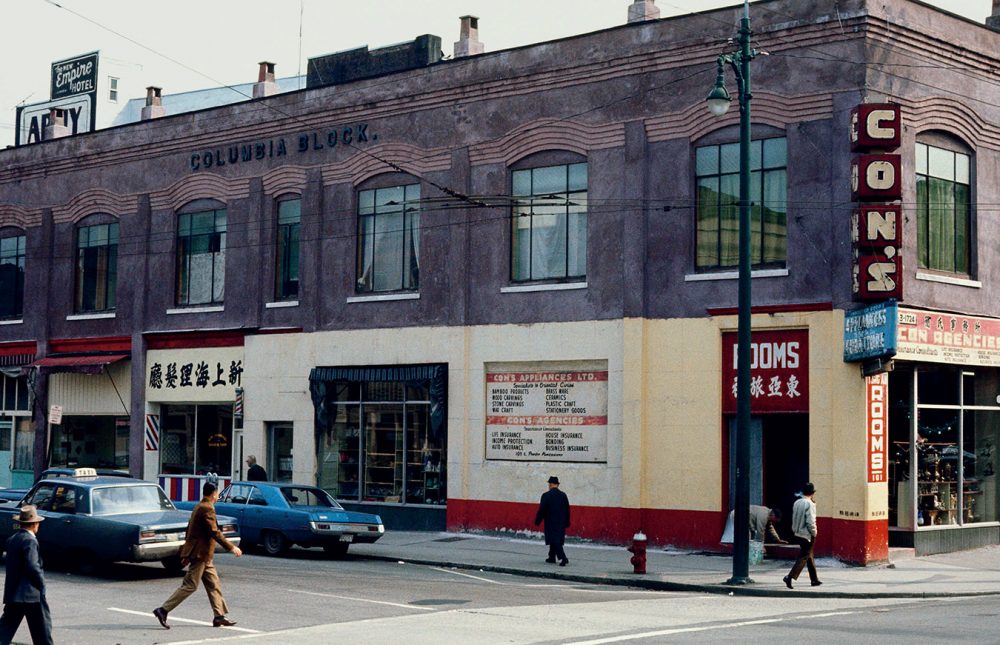 The Chinatown landscape is accustomed to transitions, both physical and cultural. After all, Vancouver’s Chinatown began as a town within a town out of necessity, and it needs change. Drawn by the Fraser River gold rush and the construction of the transcontinental railway, Chinese immigrants moved to British Columbia as early as 1850. Discrimination was rampant, and immigrant workers needed a safe harbour with a support network. This cluster became Chinatown.

Now, as many traditional Vancouver Chinese-Canadian businesses abandon Chinatown for Richmond, the historic neighbourhood’s vacant storefronts are sorely in need of tenants. The remaining businesses need more foot traffic in order to survive. The 100-year-old Chinese associations—which built Chinatown and still own most of Chinatown’s historic, balconied buildings—are looking for ways to attract people to Chinatown now that this nationally designated historic site is no longer the hub of the local Chinese-Canadian community.

“When I came here from Hong Kong in 1967, Chinatown was the place to be,” explains Cecil Fung, a longtime Chinatown landlord and secretary of the Chinese Freemason Society, which was founded in Vancouver in 1889. “Everybody came down here on weekends to buy their groceries or visit the herbalist. It’s not like that anymore. People go to Richmond or T&T Supermarket. The old Chinese shops are disappearing.”

The Columbia block building, which sits on a hefty lot at the corner of Columbia Street and East Pender, is conspicuously thriving in a Downtown Eastside neighbourhood that’s fallen on sleepy times. In the last year, a slew of young creatives, including Duchesse Vintage and Such (a vintage clothing and small furniture store), have set up alongside the Chinese Tea Shop and other traditional Chinese businesses.

The cluster is the result of a novel collaboration between Duchesse Vintage and Such, the pioneer shop, and the Chinese Freemasons, which owns the building. Add a facade restoration grant from the City of Vancouver, and the recent happenings at the Columbia block building evolve into an urban fairy tale. “We were frustrated with looking for retail space on Main Street and Commercial Drive because rent was high and the market was saturated. Chinatown is so central for how affordable it is. We were attracted to the history,” says Anna McLean, co-owner of Duchesse Vintage and Such, who began her search for retail space in summer 2010.

McLean, who also works at nearby Bao Bei, was familiar with the groundbreaking Chinatown restaurant’s participation in a city restoration grant program. She saw an ad on Craigslist by Building Opportunity with Businesses (BOB) recruiting people who wanted to open businesses in the Downtown Eastside. There was a government grant to restore vacant or abandoned spaces available for tenants and landlords. It required entering into a five-year agreement.

“The city wanted to encourage people like us to open a business in an area that’s not quite there yet,” says Anna MacLellan, McLean’s childhood friend and business partner. “We’ve both been in the neighborhood for some time—430 Columbia Street is one of the first places we talked about renting. This is our community and our home.”

Meanwhile, in 2011, the Chinese Freemasons were struggling to keep tenants in their Columbia Block building. “There was a bean sprout factory in the basement of the Columbia Block in the 1950s,” says Fung. “There were a couple of gambling dens in the 1960s and ’70s. It was a fish store. It was a post office. We had the Chinese Musical Society renting there for 20 years or so before moving to Richmond in 2011. We used to have a pawnshop. The owner lost his licence from city hall and was still storing stuff there. It was boarded up. We finally said we wanted the space back.”

Enter the Annas. “We found the Annas through BOB,” explains Fung. The landlord didn’t hesitate to rent to non-Chinese business. “From our society’s point of view, we need to have the place rented out so we can deliver services to the community with the money. But that’s not to say we’re indiscriminate and will rent to whoever pays us the most. The young creatives were a fit.”

Anna McLean and Anna MacLellan signed the lease for their dream business in February 2011. They were told it would take six weeks for the building facade to be restored. But the Chinese Freemasons struggled to negotiate with the contractor, and McLean and MacLellan waited on the sidelines for over a year to get the glass windows and heritage brick storefront in place. “There was a point it almost fell apart—$75,000 is a lot of money, but for these old buildings it wasn’t enough. It went grossly over budget,” says McLean.

In March 2012, the duo was finally able to set to work on the inside, a mess with dropped ceilings, linoleum floors, fluorescent lights, and bad drywall. Both the landlord and tenants agree that the waiting period was dark. In the ether of the lost year, there were a few shining moments. At McLean and MacLellan’s recommendation, the Freemasons took on two more tenants: a motorcycle-themed apparel store and coffee shop called the Shop Vancouver at 432 Columbia Street, and the Chinatown Experiment, a space for pop-up shops, restaurants, and creative events, at 434. Both are set-ups by young Vancouver entrepreneurs trying to make a living doing what they love. The support from the additional businesses has been invaluable since Duchesse opened in summer 2012.

Duchesse is a thriving new business with an enviable interior. Light pours in through the large new windows accenting century-old restored wainscotting and retro oddities in clever domestic arrangements. A green easy chair beckons. A globe houses a bar set. A vintage Chinese opera crown sparkles on a shelf of ornaments. A blender with pheasant wings oversees the diverse comings and goings.

According to Daniel Lui, owner of the Chinese Tea Shop and neighbour to the new Chinatown tenants, “The new businesses introduce a younger culture. They bring people to Chinatown’s traditional businesses, along with their energy.” He categorically rejects the notion that this is the face of gentrification.

Says McLean, “We were here for such a long time just working on the space that everyone on the block got to know us. They’re very proud of us—they took care of us.” MacLellan adds, “We didn’t displace anyone. We took a spot that was abandoned and sad and filled it with warmth, love, and light.”

“Change is absolutely inevitable, like the I Ching,” says Fung, smiling. “We evolve. We are not frozen in time. Heritage Chinatown buildings and signs will remain the same. The tenants will change. They are no longer only Chinese.”