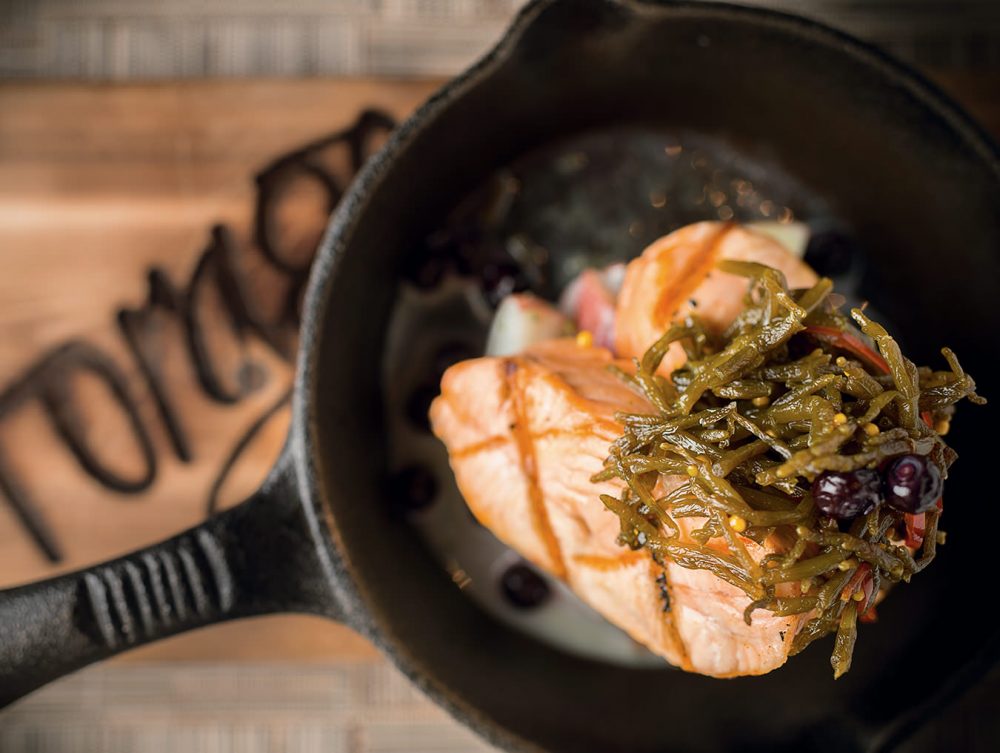 Shakespeare wrote, “a rose by any other name would smell as sweet”, but can the same can be said about sea asparagus and its salty taste? In culinary communities worldwide, numerous attempts have been made to define the green edible’s briny flavour with comparisons, naming it “sea bean”, “sea pickle” and “pickleweed”, though none of these are particularly appetizing. The Japanese have left things decidedly more vague with umi no yasai, or simply “sea vegetable”.

Fine dining establishments, by contrast, dress up menu items with a completely arbitrary and intriguing name: samphire. It sounds mildly like “Saint Pierre” when said with a French accent, revealing yet another misunderstanding between the English and the French. Known in France as herbe de Saint Pierre or pousse-pierre, the polyonymous plant is named after the patron saint of fishermen, given the coastal environments in which it grows. In Normandy, near the iconic tidal island of Mont St. Michel, sea asparagus grows abundantly in salt meadows where local shepherds bring their juvenile sheep to graze, preparing agneau de pré-salé, or pre-seasoned lamb, a certified delicacy protected geographically by Appellation d’Origine Controllée (AOC). Now that’s menu planning.

Here in British Columbia, sea asparagus grows naturally along our shores and beaches during spring and summer, and you can find sellers at the Vancouver Farmers Markets with wild sea asparagus on their tables piled high. Forager extraordinaire Tyler Gray of Mikuni Wild Harvest sources his mostly from Haida Gwaii, but also enjoys recounting the tale of once coming across a big patch in the middle of a golf course near Boundary Bay. He said it took all his discipline not to stuff the pockets of his golf bag with the findings, but perhaps had he snacked on it, it might have improved his game. Chef Chris Whittaker of the new, ultra-sustainable Forage restaurant on Robson Street remembers the first time he tasted the ingredient after moving to B.C. as a young chef. “It was a pop of flavour, and crunch.” Today he sources his sea asparagus from Ponderosa Mushrooms and Specialty Ingredients and pickles them with mustard seeds and other spices as a play on “bread and butter” pickles, a childhood favourite of his while lunching at his grandparents’ table in Northern Ontario. At Forage, the sweet-sour sea asparagus preserve is dolloped atop Pacific Provider salmon and Pemberton potatoes in a cast-iron dish. Mega-yum.

Sea asparagus of course pairs remarkably with seafood, lending its salinity to enhance the inherent flavours of the fish, and its crispness, even once blanched, gives texture. At Turtle Bay Resort on Oahu’s North Shore, chef Fred DeAngelo of Ola Restaurant prepares orzo in a similar fashion to risotto, delicately stirring in five kinds of sautéed mushrooms, fresh tomatoes, truffle oil and a kick of sea asparagus for some crunch. Chef DeAngelo’s passion for sea asparagus, which appears as well in his ahi pōke (a Hawaiian dish of chopped raw tuna), stems from his relationship with a unique grower in nearby Kahuku, a mere ten-minute drive away. Dr. Wenhao Sun of Olakai Hawaii is a scientist-cum-farmer whose research in marine agriculture led him to study, and now sell, sea asparagus.

In salt water ponds that Hawaiians typically use to farm shrimp (you’ll note the famous shrimp trucks that line the road between Turtle Bay and Kahuku), Dr. Sun has created a hydroponic system in which the sea asparagus grows on flexible platforms that float like beds on the pond’s surface. Underneath, a natural ecosystem of limu (algae) and ogo (seaweed) provides oxygen to the sea asparagus and feed tilapia, which in turn generate fertilizer. And given that most insects dislike brackish waters, no pesticides are needed. When the sea asparagus roots have extracted most of the salt from the water, it becomes clear, and the branches are ready to be harvested and eaten. In practical terms, if sea asparagus can turn salt water fresh, this technology could potentially unlock the secret to growing other vegetation on the ocean’s surface in areas where irrigation infrastructure doesn’t exist or fresh water supply is short.

So whatever you decide to call it, one thing is for sure—this flavourful little vegetable known sometimes as sea asparagus sure packs a lot of punch.