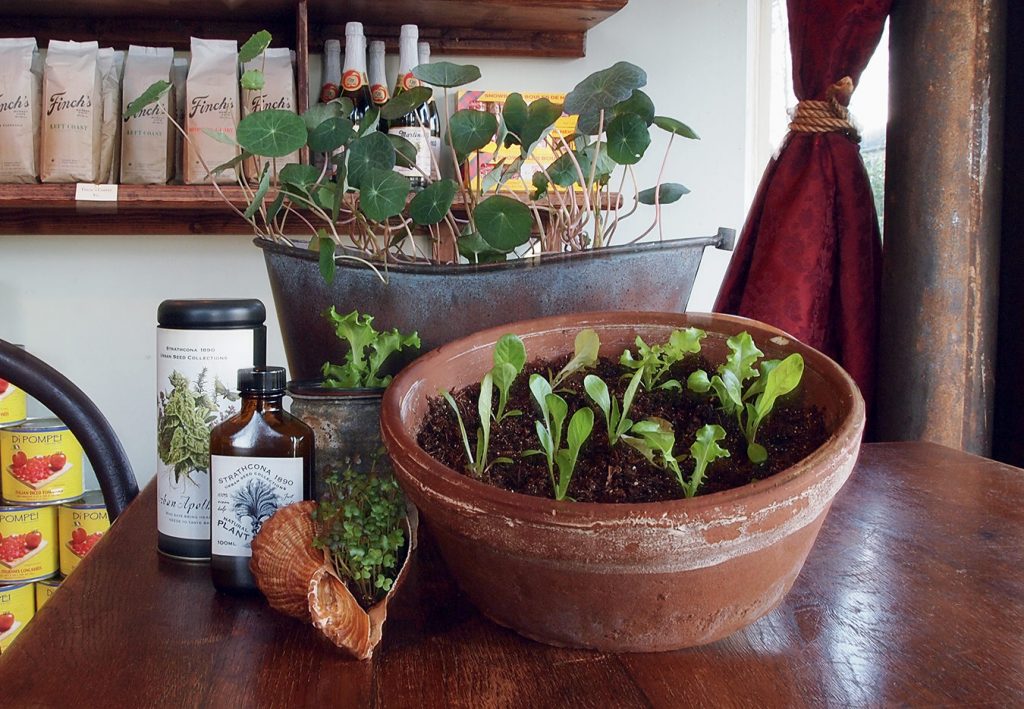 A sit-down with Judy Kenzie spurs a lengthy conversation concerning everything from climate change to the business of cool. Bubbly yet determined, she is a new breed of earth mother, extolling wisdom on the necessary practice of trial and error and personal connections made at craft fairs. At the root of all these seemingly tangential conversational branches is Kenzie’s two-year-old fledgling, Strathcona 1890 Urban Seed Collections, a seed company aimed at getting Lower Mainland residents excited about growing.

This labour of love began for Kenzie—also an illustrator and a graphic designer—two years ago, when she was helping a friend develop packaging for a spice company. It was suggested at the time that she do something with heirloom seeds to combine her love of gardening, volunteer work, and belief in food sovereignty. And so, Strathcona 1890 was sprouted.

The plant varieties that Kenzie tends are the product of numerous close relationships with a string of trusted seed growers. Her Strathcona products are all non-GMO, non-chemically treated, and sourced sustainably. “The heirloom seeds are also all open pollinated,” Kenzie says. “Heirloom plants were originally varieties developed by a family and passed down over a number of generations. Some, like the scarlet runner bean have been cultivated by indigenous people for thousands of years. But I do have a few hybrids like dwarf sunflowers and miniature pumpkins because these don’t exist as heirlooms.”

Knowing her audience well (her seeds fly off the shelves at hip Main Street stockists), Kenzie also makes sure to select varieties that are particularly appropriate for growing in small urban spaces. With the exception of the seed bouquets aimed at helping bees recover from colony collapse disorder and the paperwhite narcissus bulbs that will grow in rocks with minimal water, most of the collections are edible and accompanied by recipes.

“I try to bring in seeds that will inspire people who may not already be, to grow a little food. Depending on the collection, this comes down to taste, looks, and case of growth,” says Kenzie. “My Rare & Unusual collection has some seeds that you can’t find anywhere else in B.C., like the red Malabar climbing spinach. My Shade collection is all plants that do well in lower light, and the Edible Flowers are about being pretty and palatable.”

“Growing even a few of your own edibles really changes the way you eat and your appreciation of food.”

Kenzie’s latest project, Think Big: Grow Small, involves creating a special seed collection that would provide low-income residents of the Downtown Eastside with vegetable seeds to grow at home. A result of Kenzie’s tenacity, the project is a partnership between the Urban Seed Project and Strathcona Community Centre Youth Council, and funded in part by Vancouver Foundation. The blend was chosen based on the time of year the seeds will be distributed, where they will grow, and the amount of space they require, as well as the ease of growing and the multicultural fabric of the community. The result of such layered consideration? Snap peas, garlic chives, bok choy, Danvers half-long carrots, green and red mustard greens, kale, tatsoi, mizuna, and hon tsai tai. Recipes for snap peas with mint and a classic stir-fry are included in the seed package.

Kenzie has her finger on the pulse of this new (yet old) food culture, and she enthusiastically wants her customers to be enveloped in it. She grows the food, prepares it, and has even made her 8-year-old son, Ethan, a grower-in-training and official member of the Strathcona 1890 team. His title? Bean counter.

“Growing even a few of your own edibles really changes the way you eat and your appreciation of food,” says Kenzie. “I love the idea that people will put edible flowers in their salads and eat peas and tomatoes fresh off the vine growing outside their dining room.”

For rookie gardeners, Kenzie has microgreen sprout kits that grow in charming seashells. The set cuts out the typical gardening hassle of buying tools and supplies by including dirt, seeds, a shell, and instructions, and it sprouts within a week’s time. The covetable appearance of the kits also extends to her regular packaging, where labels are the byproduct of her illustration skills combined with historical botanical renderings from the 18th and 19th centuries. “Of course, there are certain things from that period that you can’t find,” she says. “There were no drawings of bok choy, so I did it myself.”

The label for her organic Pacific kelp fertilizer looks like something out of an apothecary: brown glass bottle, authentic paper label with curved lettering. “People are using chemical fertilizers that deplete the soil over time, but I’ve been using this fertilizer for a while—I have a guy,” she says. After pausing for a quick survey of her surroundings, she quietly mentions she has a mushroom guy, too.