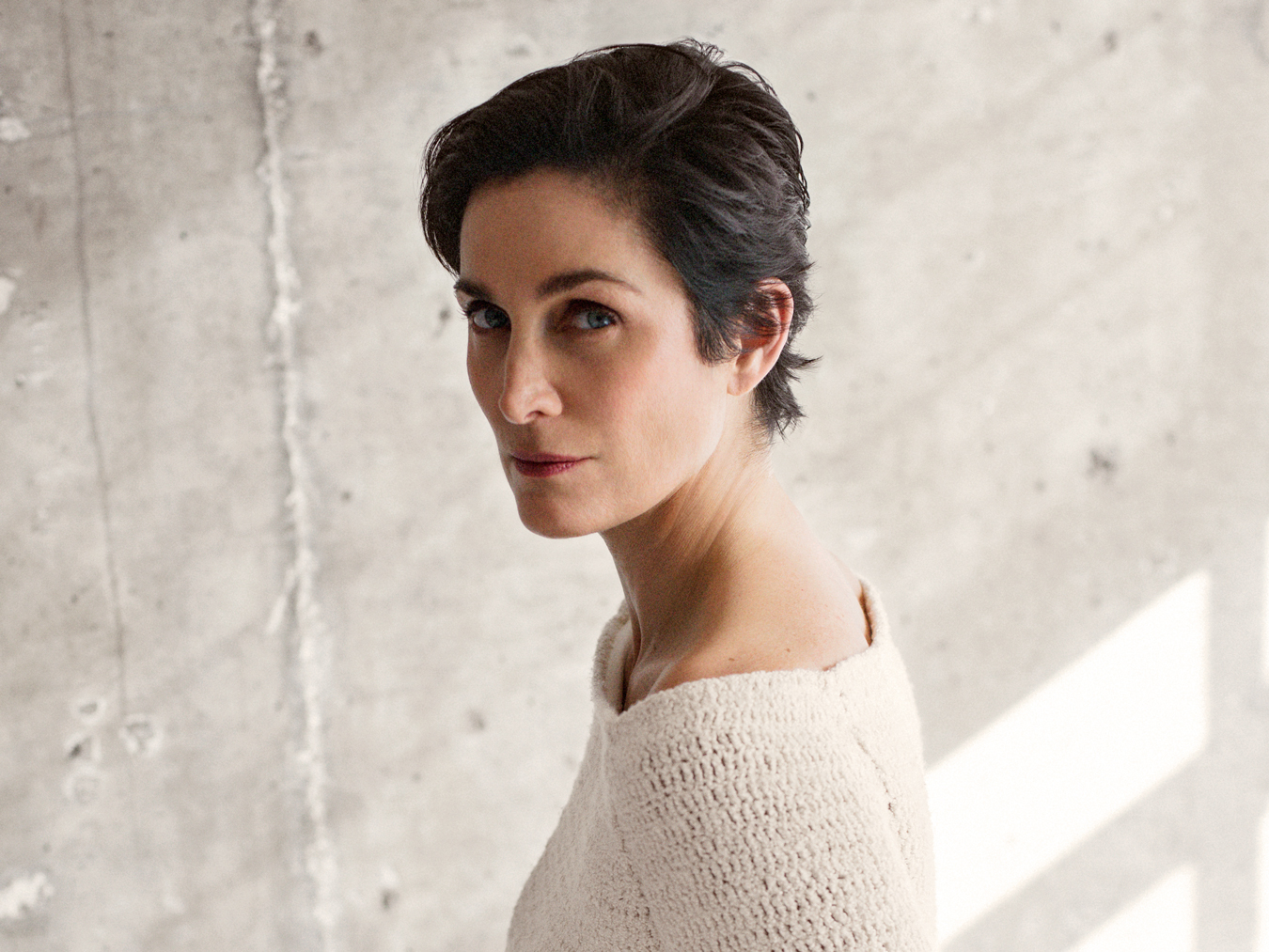 On the AMC series Humans, Carrie-Anne Moss plays Dr. Athena Morrow, a scientist who her boss declares “the best artificial intelligence mind in the hemisphere.”

It’s a testament to Moss’s acting skills that she tosses off scientific jargon as if to the laboratory born. Sitting on a couch in a suite inside Los Angeles’s The Line Hotel, she laughs as she admits, “I am the most illiterate AI technology human being you will ever meet.” It’s not only AI that bothers her—though she shudders at the mere thought of having an Amazon Echo or Google Home in her house—it’s the disconnection that our collective attachment to electronic devices brings. “Someone on their phone texting while they’re walking feels like a Synth,” she says, referring to the artificial intelligence technology from Humans. “The detachment of our world, it’s painful for me.”

It may seem odd that someone best known for her roles as Trinity, the badass hacker in the futuristic Matrix franchise; Natalie in the time-twisting thriller Memento; Aria T’Loak in the Mass Effect 2 and 3 video games; and more recently as tough-as-nails lawyer Jeri Hogarth in the Marvel Cinematic Universe’s Jessica Jones would proudly proclaim herself a bit of a Luddite, but that would mean assigning more weight to her career choices than Moss does. “I don’t really look at any of it too intellectually,” she says. “It’s like people say, ‘Oh my god, you’re in all these sci-fi movies.’ It wouldn’t even cross my mind that any of them are sci-fi. I don’t see it like that, I look at it as a story.” 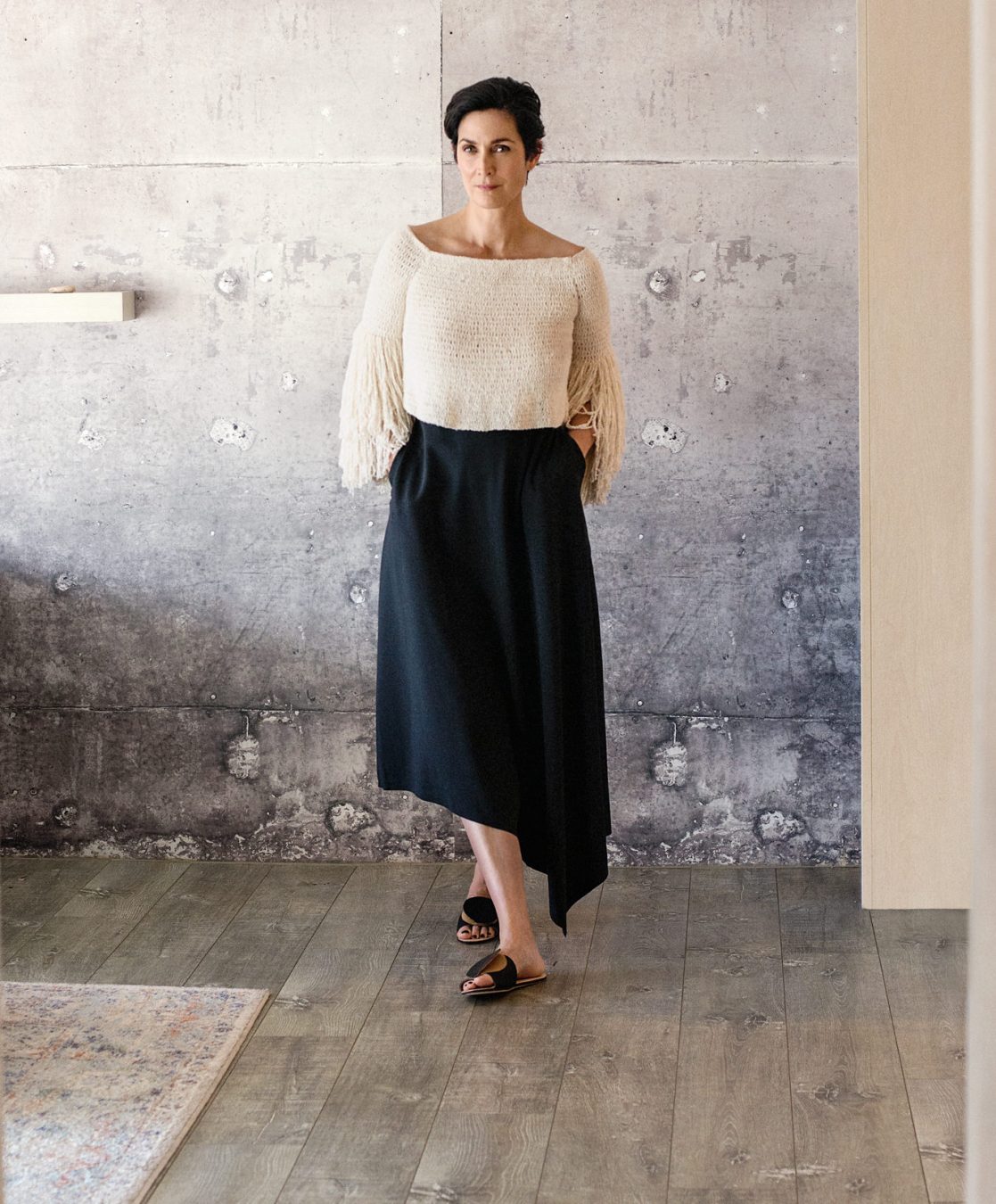 Carrie-Anne Moss wears a Rosetta Getty sweater, a COS skirt, and The Palatines sandals at The Line Hotel in Los Angeles. Makeup and hair by Albert Elizondo using Becca Cosmetics and Oribe for TheOnly.Agency.

Indeed, it is Morrow’s strong moral compass that drew Moss to the Humans character (spoiler: the good doctor may lose sight of true north later in the series). “She’s not interested at all in ever selling out. It’s just not in her nature, which I can completely relate to,” Moss says. “I’m not easily lured by anything out of my integrity zone. I have a strong sense of what’s important to me.” And what’s important to Moss, 49, is family. The mother of three with her husband, actor Steven Roy, took time off to raise her two sons and daughter, who range in age from seven to 13. She accepted acting jobs—including a story arc on Chuck—in Los Angeles, where she’s lived for more than 20 years, but otherwise immersed herself so fully in packing school lunches and carpooling that when she emerged to shoot Jessica Jones in New York, she had to brace for reentry.

“It’s like people say, ‘Oh my god, you’re in all these sci-fi movies.’ It wouldn’t even cross my mind that any of them are sci-fi. I don’t see it like that, I look at it as a story.”

“I have a very small, organic lifestyle,” she says. “When I was first travelling, it felt like another language. I had no idea how to do Uber. I asked [Jessica Jones lead] Krysten Ritter. I’d text her and she’d totally tell me. I went completely from this woman who’s been living at home, cooking for her family to, ‘Oh my god, who am I and what am I doing?’ But it was incredibly good for me to stretch out of that comfort zone, out of my kitchen into the new real world.”

It wasn’t the only time she’d veered out of the familiar. Moss grew up in Burnaby with her court reporter mom, electrician stepdad, and older brother. On her first trip to Los Angeles when she was 11, she was taken aback by the appearances of the locals. “These two blonde, sort of beauty pageant girls came into the elevator. They were really beautiful. They were dolled up,” Moss recalls. “I remember feeling like the air came out of the room and I got very small and I just wanted to stare at them because I had never seen anyone that looked like that.”

Fast-forward to a few years later, and Moss was the one people were staring at. She moved to Pasadena, California when she was 17 to study acting, but soon became a model, working across Europe and North America. Then in 1989, a serendipitous trip to a Vancouver cinema to see Field of Dreams, the classic sports fantasy about an Iowa farmer who builds a baseball diamond in his cornfield and brings back the Chicago White Sox, altered her path. The film’s “if you build it, they will come” theme deeply resonated with her. “I sat in the movie theatre and thought in that moment, ‘I’m changing my life right now,’ and I did,” she says. “I was modelling and I was like, ‘I can’t spend another day doing the same thing. I’m going to live my dream no matter what.’” Within days, she moved to Toronto to pursue acting, eventually working her way to Los Angeles. 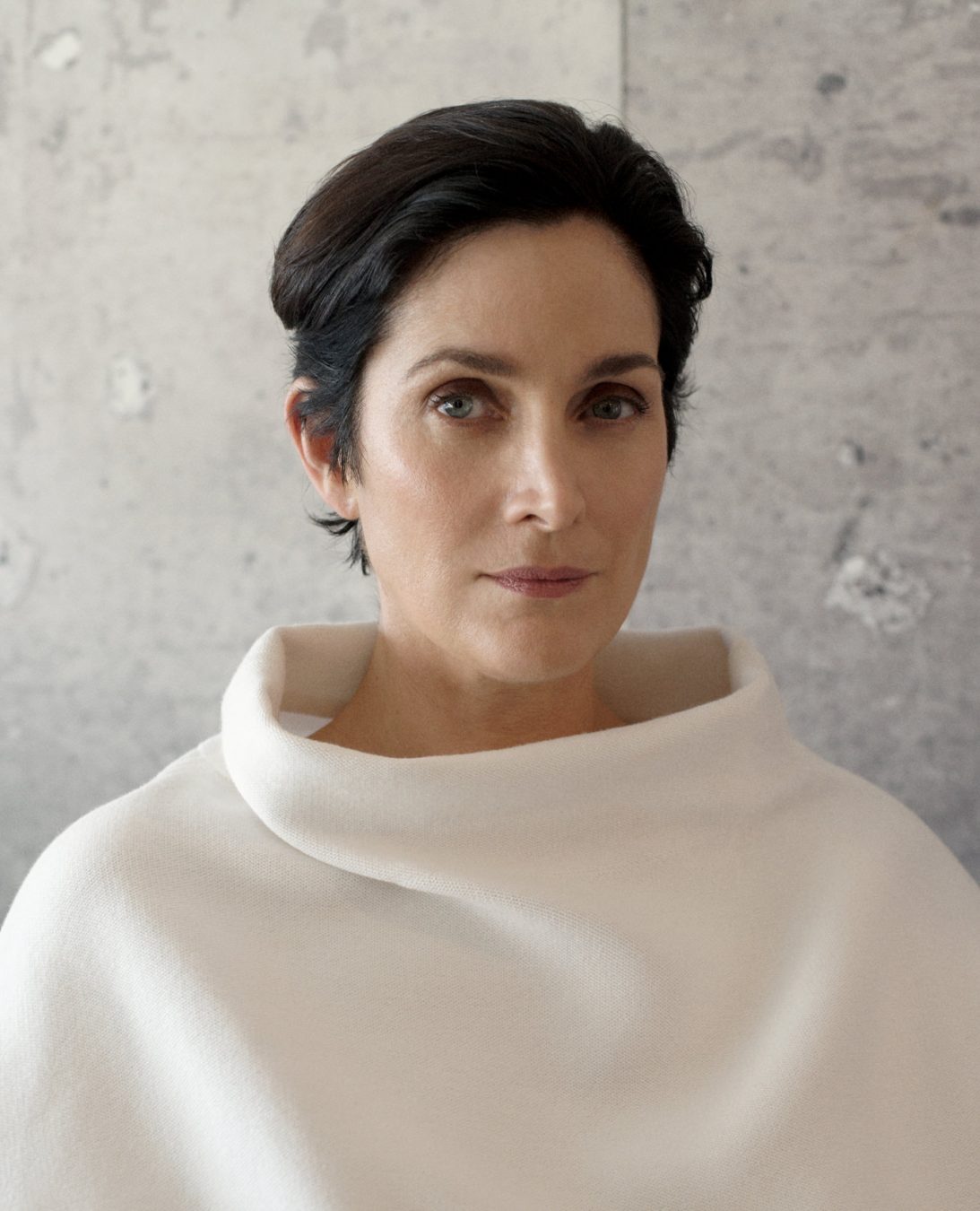 If Moss thought being an actress would mean gentler body scrutiny than what comes with being a model, she quickly found out she was mistaken. “I [remember] having an acting coach who said I wouldn’t make it because my ass was too big,” she says. “And I remember being really offended. But in a way, it lit my fire to go, ‘You know what? Fuck you. And I’ll show you.’”

With her chin-length black hair tucked behind one ear and her nearly make-up-free creamy complexion, Moss possesses a delicate radiance and a lithe build more than two decades after she quit the modelling industry. Coupled with her flinty resolve, as evidenced by her previous comment, she projects a calming stillness, which she attributes to her “really beautiful, nurturing, simple childhood” as well as to her 23-year yoga practice.

Yoga has helped her stay sane through both career tribulations and parental challenges. “My youngest one is outraged she doesn’t have a phone,” Moss says. “I’m not going to give her a phone, for god’s sake, but it’s one of the reasons I practice yoga and meditation so much, because I worry about it. It keeps me up.” A few years ago, she became a certified kundalini yoga instructor. That led to Moss launching Annapurna Living, a website designed to inspire women by offering sage blog posts and courses on mothering, as well as monthly meditations led by her. “I really wanted to share with women some of the things that I’ve been just so fortunate to have exposure to living in LA, being an actress and having this [access] to all kinds of people,” she says.

Moss’s natural inclination is to comfort and encourage, but that can prove overwhelming, as she found out during her first trip to Comic-Con a few years ago to promote Jessica Jones—especially when it came to Trinity fangirls and boys and their pent-up desire for connection with their hero. “There were a few people who were so moved to meet me, and that was really intense. I was moved by their humanity. It was so intimate and deep. It was painful at times,” she says. Their vulnerability led her to tears. “It felt like it was so hard for them to even say hello to me, and I just wanted to hold their hand. I felt like some of them didn’t have anybody in their life. I felt the loneliness, I guess.”

In addition to Jessica Jones, her Hogarth character will appear in upcoming Marvel Cinematic Universe shows The Defenders and Iron Fist. Taking it all in stride, Moss is only looking in one direction: forward. “It’s just about continually stepping into the truth of who we are,” she says. “The women that I look up to and that I think are most beautiful are women who are living that in every area of their life. That beauty that I saw when I was a kid in that elevator, that beauty at my age doesn’t interest me at all.”

From the Archives: This story was originally published on March 14, 2017. Read more stories about the arts.