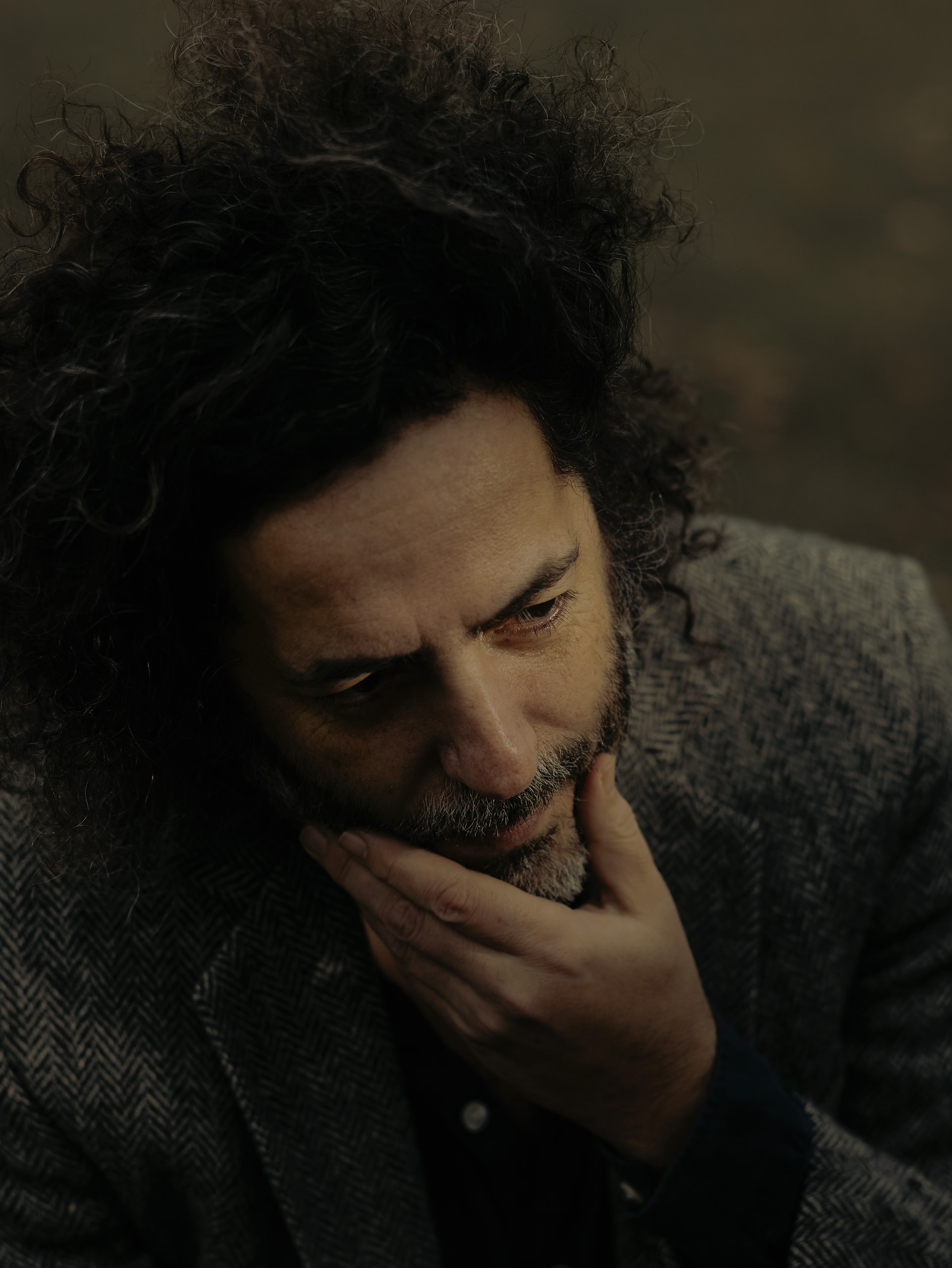 You want to go home

You want to know the way

You want to know the when and the why

It’s in your heart now

It’s in your heart

Dan Bejar does a big sweep of his big hair, rearranging his trademark hirsute halo, and shrugs.

“I remember taking a walk with a friend of mine who I hadn’t seen for quite some time after the first big lockdown and both of us had this feeling of, you know, when the world opens up again, there’s going to be this massive rave. And we’re not going to be invited.”

We’re sitting down the road from each other, but here we are talking virtually. It’s January 2022, and we’re all living through the latest setback, staying home, staying safe, and it’s not much of a leap to wonder if there truly is a party going on somewhere, but we’re not on the guest list.

“This is the demarcation in our lives,” he says, nodding. “We’re not going to be a part of the outside world or the social world in the same way we were even five years ago.”

Existential dread may once have been the preserve of poets, artists, and those with more philosophical leanings, but you’d have to be a human rubber ball to escape its anxiety-inducing tendrils these past two years. And yet, while Bejar—the singer-songwriter and public face of indie band Destroyer—has leaned deeper into the abstraction of darkness for inspiration than most, it turns out he’s just as shaken up as the rest of us.

“You’re not lit up by the world,” he concedes when I wonder how he corralled his creativity during these strange days. “It’s funny, I feel like a younger me—as in, someone three years ago—still romanticized dystopias. A postapocalyptic Bladerunner world…

“Not that I romanticized it,” he self-corrects, “but that it seemed like a creative idea that would spark something. And that feels really wrong now. It really feels that if anything, such a world would just be incredibly boring.

“It’s not that I am so engaged with the world,” he clarifies once more. “I’m pretty reclusive. I don’t go out, but I like to know it’s out there. I like to know that you could set a drama out there, and it wouldn’t be a complete work of fantasy—and right now it is.

“Not that I have ever been a great defender of human contact, but I feel that has to account for something as well. It’s hard to write to a world where there’s no such thing as dancing anymore, let alone such a thing as walking into a random crowded bar. There’s no crush of bodies, no interaction with strangers. 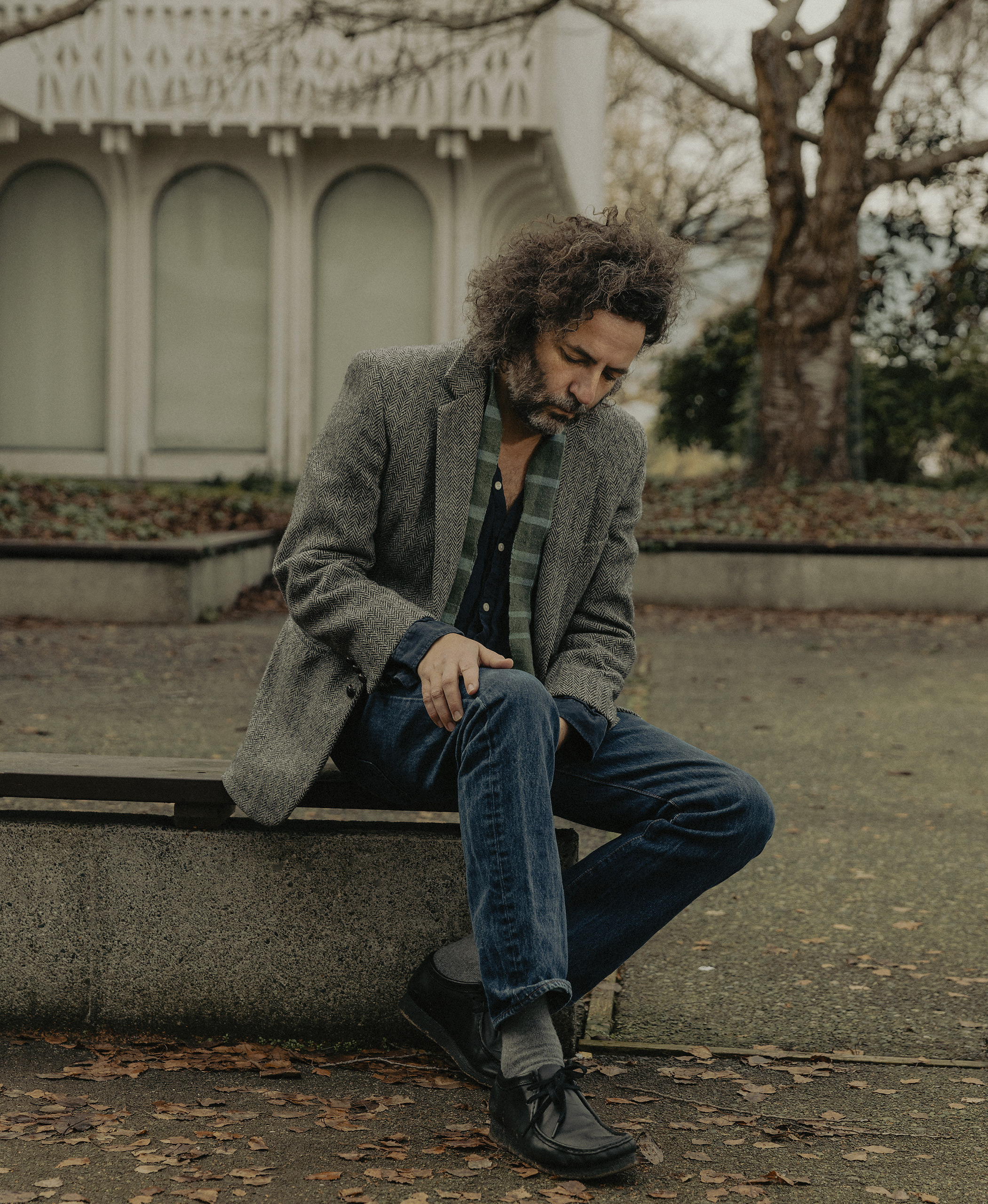 It’s my third time interviewing Bejar. The first was in 2015—a lifetime ago—when we talked about the lush, cinematic romanticism of the band’s 10th album, Poison Season, while he hid in a closet as
his young daughter and niece chased him around the house. The
second was February 2020,
marking the release of the poppier, synth-forward Have We Met (in between was 2017’s ken)—and was never written up because, well, you know that story. And today we are at it again, this time with latest album Labyrinthitis to discuss.

The new record is another shift in Bejar’s gears, but that’s no surprise. If one had to distill his work down to a single idea, it would be that there is no single idea. Or maybe it would be that as anti-pop as his voice and lyrics are—“alienating” is a common if misguided epithet often attached to him—his music makes you want to get up and dance.

You might be forgiven for invoking archness or irony, but he’s too honest, thoughtful, and yes, funny for that. Contradictory would be closer: there’s something curiously restrained—shy, even—in how he does what he does, and at the same time, it’s totally, unapologetically bombastic. He’s the rock star most likely to turn his back on you and sing toward the band.

He was born in Vancouver (“How embarrassing is that? Who lives in the city where they were born?”) but moved around a lot growing up, including time spent in the U.S. (home of his mother) and Europe (his father, who died when Bejar was 13, was Spanish). He dropped out of university and eventually dropped his first Destroyer record in 1996. In 1997, he joined Carl Newman and Neko Case in the New Pornographers, and in 2001, a year after that band’s debut album Mass Romantic, Bejar was already releasing Destroyer album number four.

In typical contrary style, he left the bigger band almost as soon as it started to gain real traction. Nowadays, when he does play with the New Pornographers, he only performs the songs he penned. When we spoke in 2020, he said he couldn’t imagine writing for them again, but that if they swung through Vancouver, it would be hard to not get up on stage. Fast forward to last December, and two packed, back-to-back gigs ended a six-city, 12-night tour in Vancouver with Mass Romantic and 2005’s Twin Cinema played in their entirety on consecutive nights. They took place in the tiny window between things getting better and Omicron taking hold.

“That tour was a miracle,” Bejar says in palpable disbelief. “If it had happened a week later, the whole thing would have been cancelled.” He says he enjoyed it, though it was hard work—complete albums require performing some songs the band have never played live before, involving serious rehearsal time. “The first few shows were really stressful—less for me, because I just wander out there—but for Carl and the rest of the band just holding it down and remembering it all… By the time we got out here, I thought it was pretty dialled in and was sounding good, and the band said at least the Saturday show felt like the best Vancouver show they had ever played—it was pretty animated.” 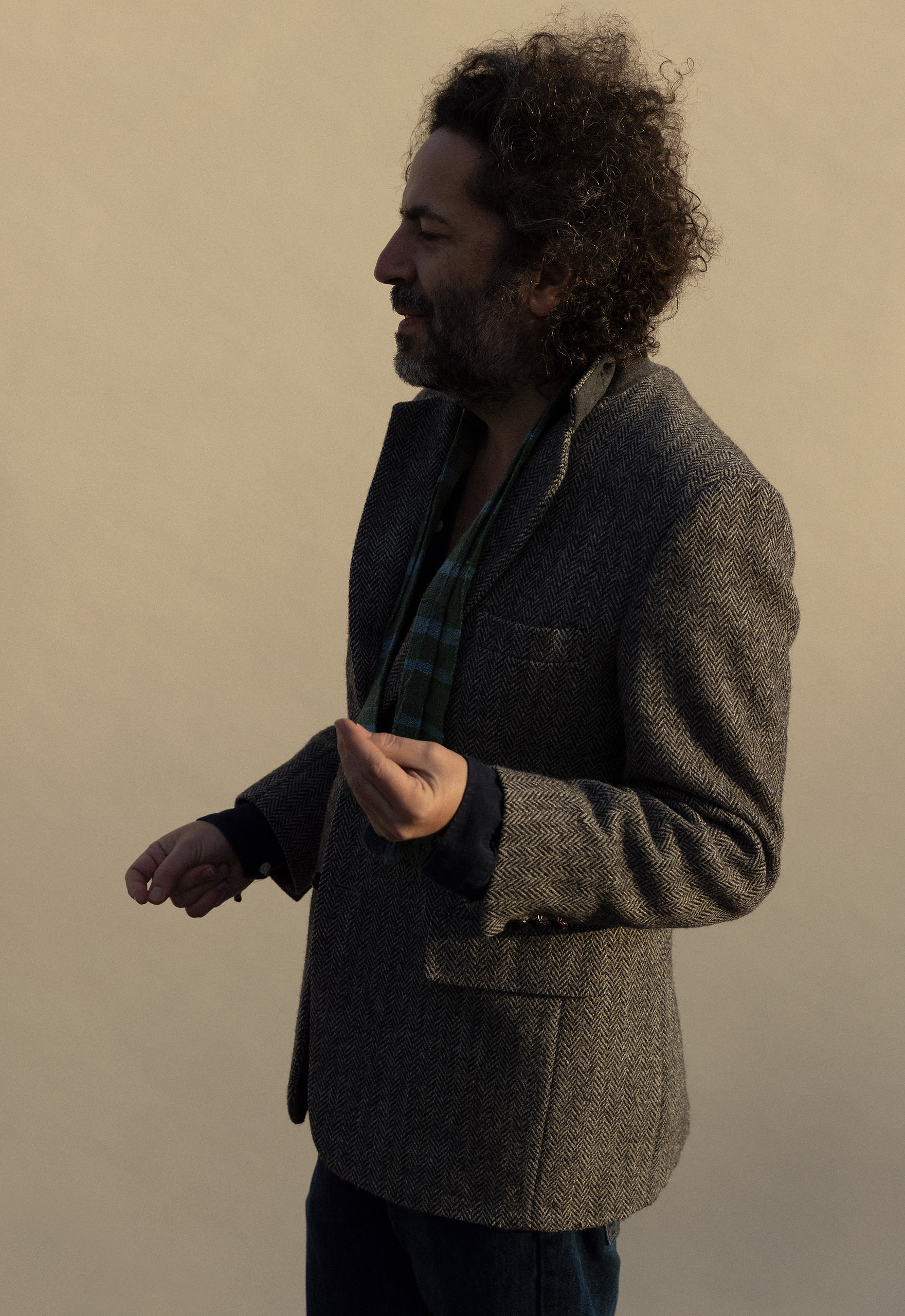 Suffer ’neath the weight of the grandeur

Labyrinthitis is another departure and yet remains, indelibly, Destroyer. Where Poison Season’s synth references land on the sunnier sides from the likes of the Cure and New Order, here there’s a driving back beat that reaches into some kind of mania—a frantic need to break out, perhaps? “It sounds kind of crazed,” Bejar agrees. “Or agitated.”

Part of that frenzy could have resulted from a short production schedule enforced by the label. “There’s a worldwide vinyl production crisis,” he explains. “We only had a nine-month window, and we found that out pretty late.” The pandemic played its part in other ways, of course. Having never been one to obsess over the news, Bejar says he morphed into a doom scroller, not anticipating the deleterious effects.

“I didn’t catch on to that part until it was too late,” he admits. “I felt like something was clamping down on me. There’s always a slight aura of claustrophobia in Destroyer records, and this album has a very strange version of that. I can’t quite put my finger on it, still. It has songs that I think were made in a state of anxiety, probably for the first time ever.”

His lyrics are oblique; he throws words together in ways that defy simple understanding. They exist in a cinematic dreamworld, imagistic, fractured—pieces of people and places, characters and scenes, chopped together until they build into an emotional crescendo or simply fade into darkness. Somehow, I tell him, the new record feels as though it is saying something specific. But perhaps it’s just because we have all been living through the same experience?

“That makes total sense to me,” he says, pausing to give the idea more thought. “Some of the lyrics on the last album, because they were culled from old notebooks and things like that, are kind of dense and imagistic—more of the traditional Destroyer style,” he continues. “And these ones, yeah, I feel like I’m really addressing someone in the songs, whether it’s myself or the world at large. You’re always addressing someone or something, but I agree there’s not much in the way of character play. In a lot of ways these songs do seem less filmic in the writing. 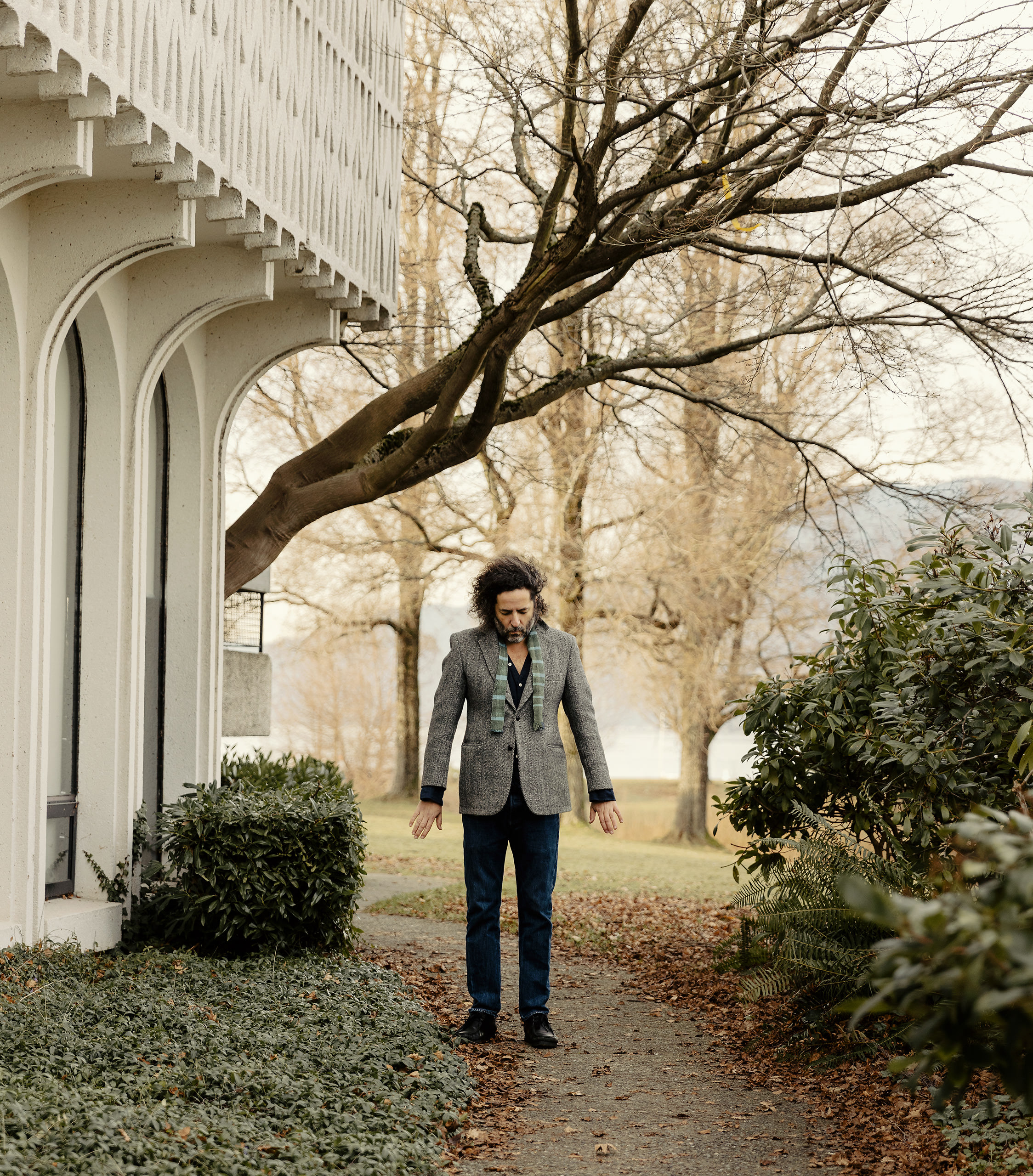 “I don’t know what that’s about,” he continues after a couple more beats. “It’s strange because to me, the music in a lot of ways is more abstracted.”

As is the title. “When I first saw the word, I thought it meant addicted to mazes, or perhaps confusion,” he recalls. In fact it’s a medical term for an inflammation of the inner ear, “a sense of vertigo, a fogginess” that, he says, sums up the album. “It sounds like music adrift, to me,” he proffers. “It’s kind of brash.”

The chaos of the music, he says, belies how he’s been living through the pandemic. “I’ve spent most of my time just trying to comfort myself.” He smiles. “Wake up, put on Bill Evans, just listen to piano trios. Whatever can calm me down.

“I totally understand how stocks in New Age music are sky high right now,” he adds. “People just want to maintain a balance, escape a little bit. I just didn’t make a record like that and I’m not sure why.”

That’s where the collaboration comes in, of course, and he says that, more than ever, band member, producer, mixer, and general musical polymath (synth, guitar, and more) John Collins drove Labyrinthitis to this new space.

“I think the record is kind of free and no holds barred—there’s a liberty to it.”

“I think the record is kind of free and no holds barred—there’s a liberty to it. There’s a handful of songs, not even in a production sense, but a basic melodic, harmonic sense that are completely alien to Destroyer world. And I cannot stress how much of that was John.”

I tell him I feel like one of these songs deserves to be the disco dancing coda to a great movie—such as Beau travail or Morvern Callar—and that all the world needs now is to be able to jump up and down freely. “I feel like there is an element of that,” he responds. “Revelling in zero answers. I don’t know if that’s where we are at, but I do like that notion. That was the kind of idea behind the album—make it sonically extreme and just have a ton of things going on all the time, find out how much the songs can endure.

“Not that any of us saw each other as we made it,” he notes. “It was all just a bunch of file sharing—the drummer lives in Chicago now, and the keyboard player lives in L.A. It was all just people recording stuff wherever they are and sending it to us and then John shredding it to bits.

“And John, I think he just really wanted to make something wild.”

Then you look up, by chance, from the disco dance you’re doin’

Into the light of the moon 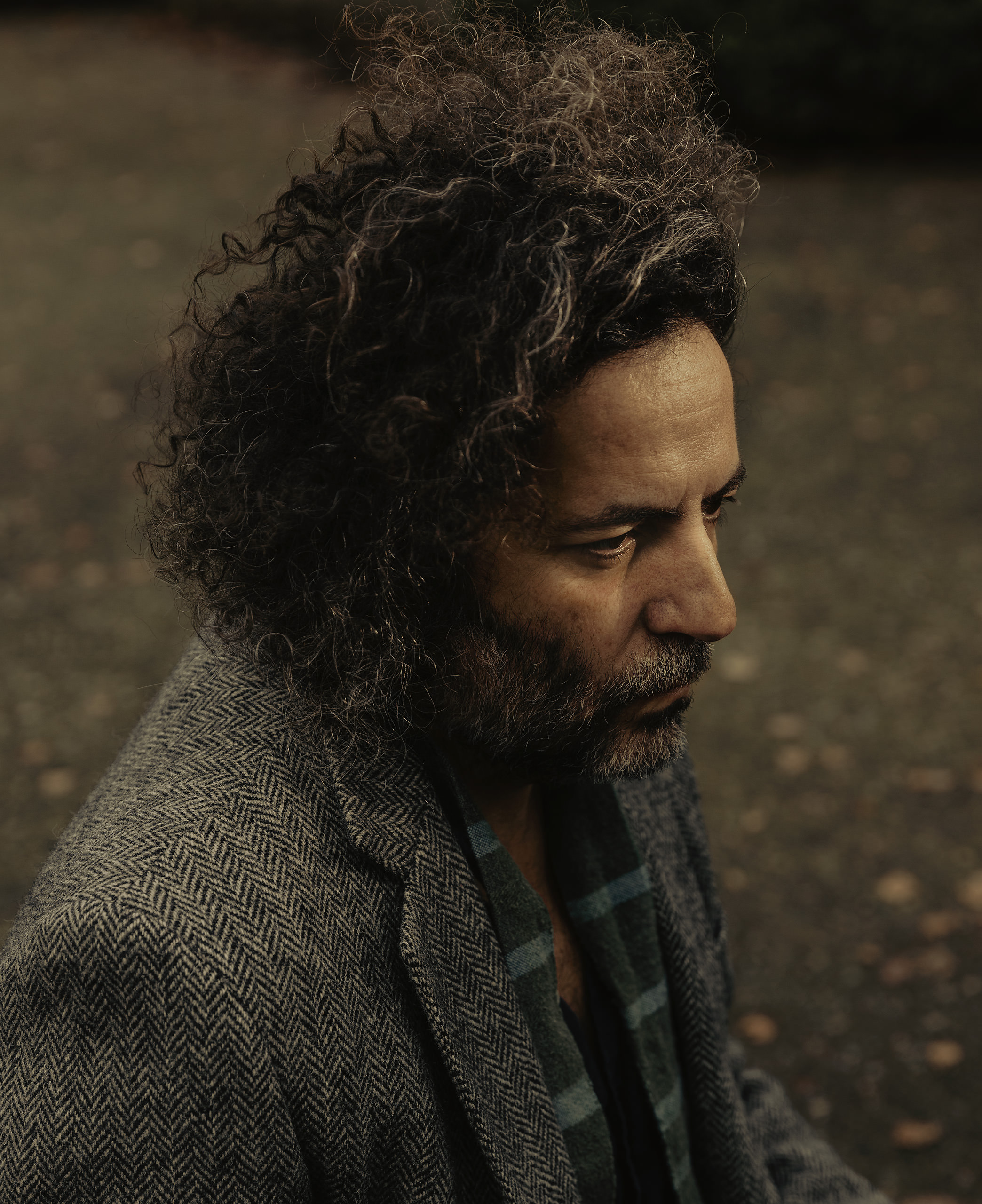