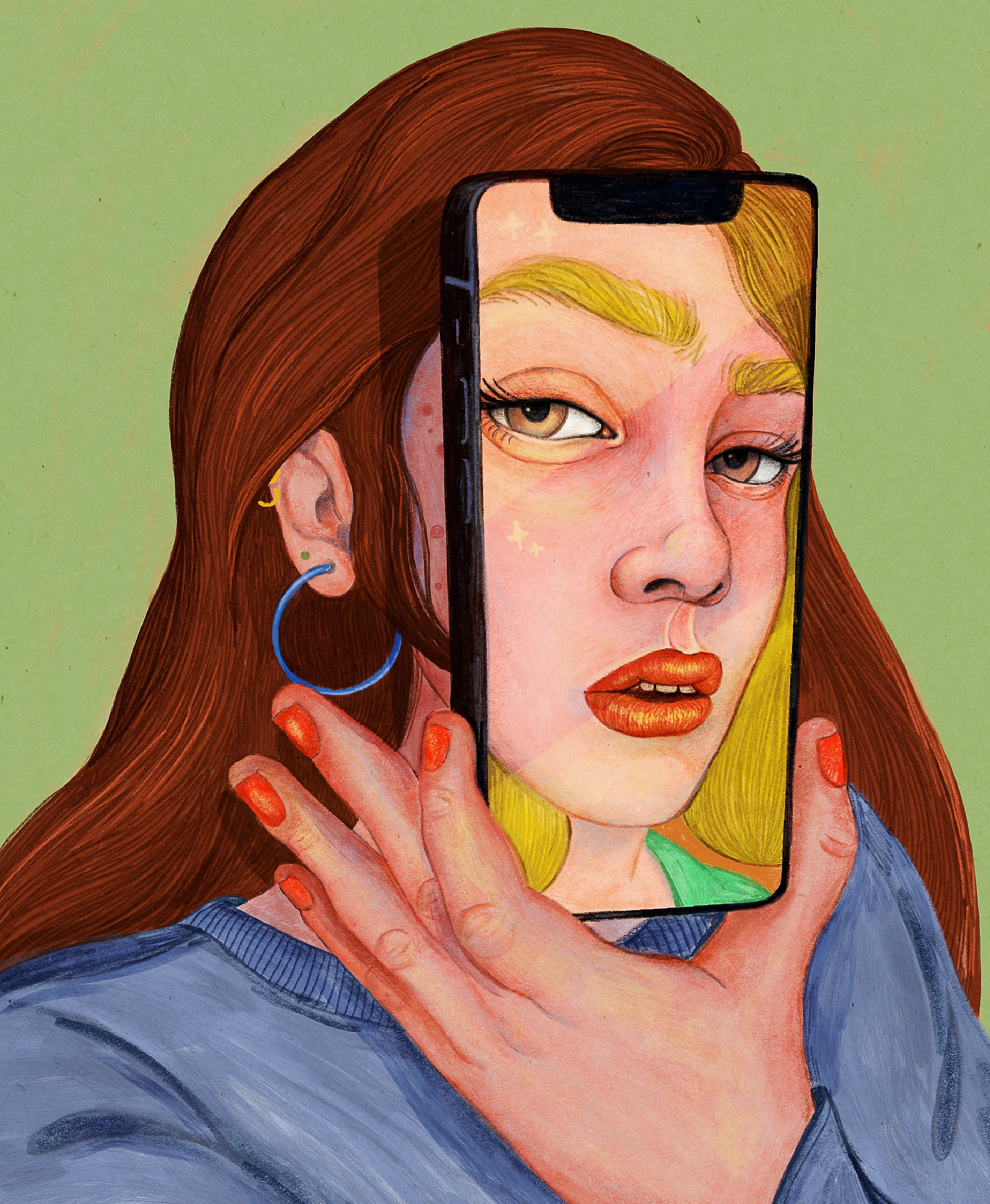 Sometime between 2019 and now, I stopped recognizing my face.

I’m not entirely sure when it happened—looking back, it feels like overnight—but one day, I walked past a mirror and I saw a stranger. It was a little more age, a little less makeup, and a little change in weight, but to me, it represented an insurmountable difference in personhood.

I felt disconnected from this visitor. Surely she’d leave and my old face would return. It got worse when my friends or my hairdresser looked at my photos and told me I didn’t look like that. But I do look like that. That is me. Photos don’t lie. Do they?

When “Instagram versus reality” started trending on social media, I realized I wasn’t the only one who felt disconnected from their image. “That’s not my face!” circulated on repeat as young women presented themselves with and then without digital beauty filters. Both images are beautiful, but one is uncanny-valley levels of manufactured perfection, and the other is real.

During the pandemic, Zoom dysmorphia—an unofficial term—cropped up extensively in the media, and older generations were not immune to the pressure. As the only way to communicate with offices and loved ones turned virtual, people found themselves face to face with their visage like never before. And just like the introduction of filters on social media, the video conferencing software introduced its own “touch up appearance” feature.

Once I’d seen the pattern, I couldn’t unsee it. Editing was everywhere. If people weren’t layering makeup filters or skin-smoothing effects over their TikTok videos, they were Facetuning their Instagram pictures (a more sophisticated photo-editing application that retouches and enhances images). Perfect is the new presentable at all times. I had always known it was happening, but I had no idea how pervasive or deep the insidiousness of editing went, or how it was affecting my psyche or the well-being of others.

I don’t use Facetune, but it would be dishonest to suggest I don’t edit. I’ve become accustomed to viewing my face through carefully chosen, posed, Instagram images. I see myself more often in photos than in a mirror. But more than that, my digital memories of myself are selective. I’ve deleted unflattering images of myself from my phone and thereby my consciousness. My self-image has been consumed by its digital imprint.

As we stare at ourselves on Instagram, on TikTok, or reflected in a Zoom call, often through increasingly sophisticated and subtle digital filters, something is happening to our imagined versions of ourselves.

Writer, activist, and TikToker Rayne Fisher-Quann has over 177,000 followers, and her short and snappy political commentary videos discussing everything from beauty standards and makeup to filters and revolutionary feminism can receive over a million views. But at any given time, she says, a significant amount of the comment section will be dedicated to her appearance.

“The nature of being, I guess, any person on the internet, but especially being a woman on the internet, is that your appearance is always part of the story,” she says. Some tell her she’s part of the problem for upholding standards of beauty. Others call her ugly and accuse her of jealousy. The confusion and frustration of constant feedback, she says, makes it difficult to form a realistic sense of her own image: “The experience of dysmorphia is often to feel like a total disconnection from reality in terms of what you look like.”

Facial dysmorphia is a form of body dysmorphic disorder (BDD)—often linked to eating disorders—and is defined as a persistent and unnecessary dissatisfaction with one’s facial appearance. Many of us may be overly self-critical, but according to Dr. Lynn Alden, a clinical psychologist and professor of psychology at the University of British Columbia, “People who really meet the clinical criteria spend an average of three to eight hours a day thinking about their appearance. And most reported that they have no control. These thoughts come into their mind, and there’s nothing they can do about it.” She says the disorder is characterized by repetitive behaviours such as checking in the mirror, seeking reassurance, trying to wear makeup that hides the perceived flaw, picking at the skin, excessive tanning, or cosmetic treatments of various sorts.

The disorder was first noted in the Diagnostic and Statistical Manual of Mental Disorders (DSM) in the 1980s, but at the time it was lumped together with psychomatic disorders and only later reclassified as an obsessive-compulsive disorder. It wasn’t until the most recent version of the DSM was published in 2013 that there was greater recognition of the specific compulsive behaviours associated with facial dysmorphia and BDD.

Alden doesn’t know of any clinical studies quantifying the connection between filters and facial dysmorphia, but it’s hard to say, because clinicians and physicians are increasingly aware of it. “We don’t really have a good benchmark,” she explains.

A 2021 study published in the International Journal of Women’s Dermatology concluded that “patients seek cosmetic procedures to improve their appearance on video-conferencing calls” and “may be staring for hours and scrutinizing a distorted image of themselves on screen and develop a negative self-perception as a result.” This study is one of several in the field of esthetics that has researched the connection between appearance and technology in a way psychology has not. It goes on to say, “esthetic physicians and the medical community at large should be aware of this trend and be prepared to address Zoom dysmorphia, a potential emerging contributor to BDD, in patients seeking an esthetic evaluation.”

According to Vancouver facial plastic surgeon Dr. Thomas Buonassisi, filters also influence people in search of cosmetic procedures. “I see people all the time come in, and I’m not sure if this is filter dysmorphia, but they’ll come in, and they’ll show a photo of somebody and say, ‘Well, I really would like to have that nose,’ or ‘I’d like to have that facial shape.’ And I’ll say, ‘You know that’s done with a filter?’ and they’ll go, ‘Well, yeah, but I mean, I still like the way it looks,’” he says.

Buonassisi believes that if someone is suffering from facial dysmorphia, surgery is unlikely to be helpful. In fact, he thinks it will exacerbate their fixation. Some clients are adamant surgery is the answer, and it can be difficult to stand his ground and tell people it doesn’t work that way. “Filters can do things that there’s no way you can do that with surgery,” he notes. “Nor would you really want to, because there’s going to be a day when that filter is not going to seem attractive anymore. And then you’re left with a facial shape that is computer generated. I don’t think that looks good.”

“It’s hard for me to blame individuals for light Facetuning, or using filters, to try to alleviate that constant criticism and hatred that’s directed at women for their appearances.”

Fisher-Quann doesn’t use filters on her videos, but she understands why people do. Makeup creators in particular, she says, are targets of vitriolic comments daily, all directed at their faces. “It’s hard for me to blame individuals for light Facetuning, or using filters, to try to alleviate that constant criticism and hatred that’s directed at women for their appearances.”

At the same time, she recognizes filters have a dangerously homogenizing effect on the faces that appear on social media. We are naturally drawn to them because they make us look great. But, she points out, that itself is an artificially created ideal with deep roots in problematic white beauty standards. She references a specific beauty filter on TikTok that makes Black creators’ skin five shades lighter. “It literally makes them look white,” she says. Most filters focus on lightening the skin, slimming the face, enlarging the eyes and lips, and shrinking the nose. Dysmorphia caused by filters, she argues, disproportionately affects racialized, ethnically Jewish, and plus-size women who are digitally manipulated into versions of themselves stripped of all cultural or defining features in search of beauty. “That’s obviously not a healthy or ethical ideal.”

Brittany Gray, a Toronto makeup artist and the founder of Fancy Face, is also no stranger to the impact cosmetics, filters, and social media can have on women. At first, she says, photo filters felt like a fun trend. “Then, all of a sudden, you start to notice that you’re feeling the impulse to reach towards it to show your face at any time on social media.”

For her mental health, she stopped using filters entirely, even including hashtags under some of her Instagram posts to indicate they were unfiltered. The response from her followers was overwhelmingly positive. There was no longer a barrier between her and them.

Gray believes leaders in the beauty community should teach young women about filters. “It’s something that people might have started doing out of creativity, but unfortunately there’s a negative effect to it,” she
says. “And it’s important to recognize that and know it can go downhill pretty quick.”

In 2019, the company responsible for many of Instagram’s beauty filters banned augmented reality features that mimic cosmetic surgery. But for every ban there is always a new technology ready to capitalize on our insecurity.

I don’t love my new face yet and I haven’t posted a photo on social media in months, but I’m getting there. I don’t feel disconnected anymore.

Nor do I feel alone.

Read more from the Spring 2022 issue.