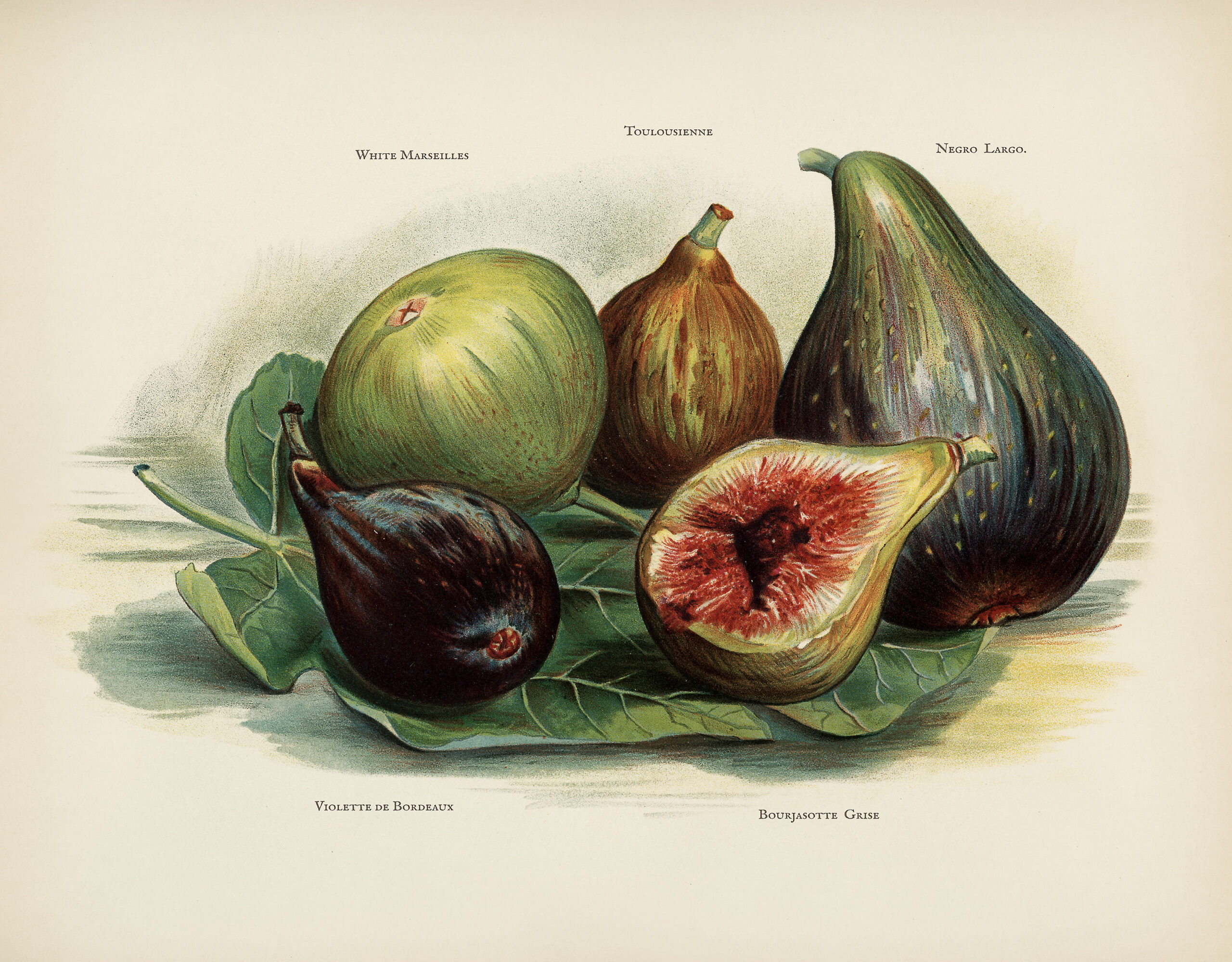 When Umberto Garbuio passed away two years ago, at the age of 90, he was remembered as a passionate winemaker, a generous friend, neighbour, and father, and an eccentric but virtuosic gardener. He was also remembered for his fig trees.

The oldest of Umberto’s figs was planted around 1970, his son Ron remembers. Umberto had just moved to Vancouver with his young family when he planted the Italian honey fig in the garden of his North Burnaby home. Today, the tree wraps like an enormous half-cupped hand around the garage, spotted with moss, bulging with rings of bark from long-ago pruning, and lumped by a bit of masonry accidentally swallowed into the swelling trunk. Above the roof, the branches coil irregularly in a tussle for light and space, bursting up finally into long, thin stems that nearly interlock with a second fig planted later on the far side of the garden.

The largest fig tree in Canada, Umberto would proudly announce. There’s no evidence, his wife, Cecilia, would object. But there was no evidence that it wasn’t true, either.

Umberto was born in Castelfranco Veneto, near Venice, and sailed to Canada in the late 1950s. There’s a photo of him on the boat, smiling confidently into the camera, wearing a sharp, notch-lapelled suit, a wristwatch oddly fastened on each of his wrists. Unhappy with the frigid temperature in Montreal, he moved to Vancouver for the temperate weather, more like his native Italy—somewhere he could grow figs.

Umberto was both jealous and generous with his fig trees. He fought a battle with the local birds and wasps, covering the trees with protective nets and installing ultrasonic devices on his roof. He wanted to put the cats on the roof too, but Cecilia objected. When the figs were ripe, however, he gave the legendarily sweet fruit away with abandon to his friends, his four children, and his neighbours. He fermented the figs into wine, which he served with pride. When strangers stopped to admire his trees, he invited them inside without hesitation.

Even into his retirement, Umberto would undertake the monumental task of pruning his precious fig trees, just enough that the knotting and weaving branches would not entirely overtake the garden but not so much as to stunt the bountiful summer crop. This careful pruning is a ritual practised every year all around Vancouver, a city that has adopted the fig—an unlikely but hardy transplant from a warmer climate—as one of its most cherished trees.

Winter or very early spring is the time to prune a fig tree, says Jim Gilbert, a fig cultivator at Northwoods Nursery in the fertile Willamette Valley of northwestern Oregon. Young figs should be trimmed back to encourage a strong central trunk and branches that form a vase shape with an open centre. The sensitive balance of pruning a fig tree is in cutting away some of last year’s new wood, to promote vigour in the remaining branches, while leaving enough to fruit.

From Flore médicale, 1833. Courtesy of the Biodiversity Heritage Library.

It’s difficult to assign any single meaning to the fig because its tangled branches have grown so thickly through myth and history. The sweet, soft fruit of the fig is temptation; the Greek demigod Tantalus was punished by a magical fig tree always just out of reach, giving us the English word tantalize and the Tantalus mountain range that rises just out of reach beyond the Squamish River. Some say Eve’s forbidden fruit was a fig, and it was in fig leaves that she and Adam hid their nakedness. The Persian god Mithra was born out of a rock beneath a sacred fig tree and kept himself alive by eating its fruit, and Gautama Buddha found enlightenment under a fig of the species Ficus religiosa. To Cleopatra the fruit was death, the asp she clutched to her breast brought to her, as the story is sometimes told, in a basket of figs. The legendarily philosophical Athenians were known as philosykos, or fig-lovers, and in his book on fig trees Ladders to Heaven, writer Mike Shanahan speculates that the first human societies may have gathered underneath ripening fig trees. To the Romans figs were both life—the tree nourished and protected the city’s mythic founders—and war—Cato convinced the Roman senate that Carthage was near enough for attack by brandishing a fig that had been whisked across the Mediterranean without losing its freshness.

It was the Romans, indirectly, who gave us a unique word for the fig’s yearly cycle, breba, from the Latin bifera, meaning twice-bearing. The word now refers to the earlier, midsummer crop of the twice-fruiting fig tree that ripens on last year’s new growth. The breba crop is particularly important in the Pacific Northwest’s cooler climate, because without exceptionally warm weather, the later autumn crop that grows on this year’s wood never ripens at all. Varieties such as Desert King, Grantham’s Royal, Olympian, and San Antonio are well suited to Vancouver’s temperatures because they produce bountiful breba crops. Varieties in the San Pedro fig family, such as the Desert King, will not produce a second crop at all if it is not pollinated by fig wasps, which do not live in the Pacific Northwest.

This is a common misperception—that when you bite into a Vancouver fig, you are consuming hundreds or thousands of baby wasps. In many places around the world, where hundreds of species in the genus Ficus grow, there might be a few. Fig trees have evolved in an intricate dance with the fig wasp, an insect that both begins and ends its life inside a fig, carrying pollen along with its eggs from one to another. When Aristotle observed the fig wasp, he believed it was spontaneously generated from inside the fruit.

Because the fig is itself a flower, it seems to magically come into being without blossoming, giving the fruit its Chinese name wu hua guo, or fruit without flowers.

But not only are fig wasps not produced by the fig tree, the fig itself is not even really a fruit. Biologically, the fig is a cluster of flowers curled in on itself, leaving only a tiny hole at the tip the right size for the wasp. Because the fig is itself a flower, it seems to magically come into being without blossoming, giving the fruit its Chinese name wu hua guo, or fruit without flowers.

As long as 12,000 years ago, perhaps in the Jordan valley, humans started to plant sterile, seedless fig trees that could only be propagated by placing cuttings in the soil, one of the first stationary crops heralding the age of agriculture. Some of the cultivated figs, of the species Ficus carica, that spread throughout central Asia and the Mediterranean, are still fertilized by fig wasps, such as the Smyrna. All the varieties that fruit in Vancouver, however, are sterile and contain no wasps. 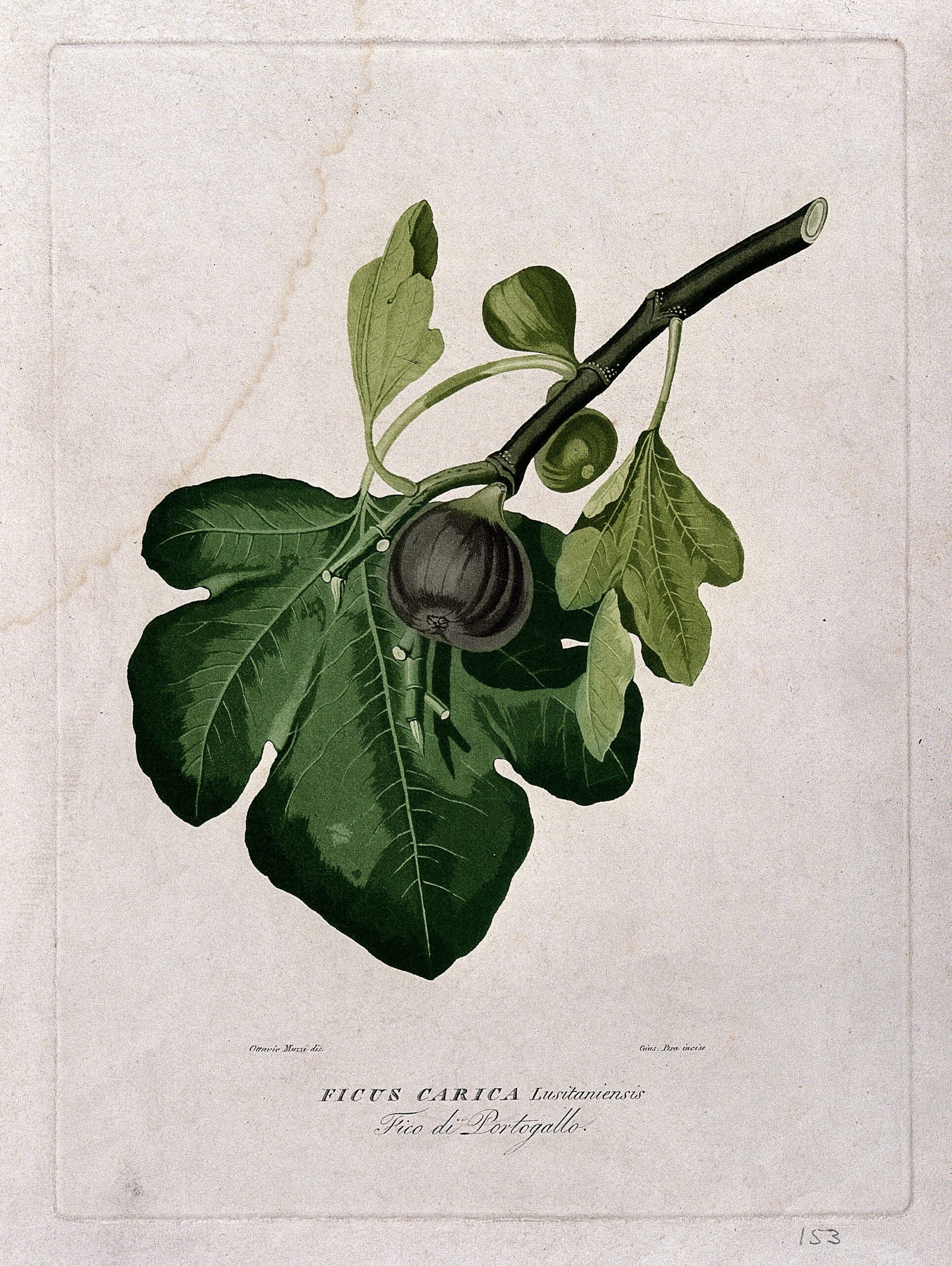 It’s not clear when the first fig trees arrived in Vancouver. Ficus carica arrived in the new world in the 16th century, and by the beginning of the 18th many Castilian fig trees, all sterile, were growing in Baja California. In 1792, on his way from surveying Point Grey, the site of the city that would one day bear his name, Captain George Vancouver found fig trees in the mission garden at Santa Clara, California.

If you ask fig cultivators around the Pacific Northwest, though, they’ll tell you that fig trees likely started arriving in Vancouver in earnest a century later, with the first waves of Italian immigration to British Columbia that followed Italy’s unification in the late 19th century. It was that or the Fraser River Gold rush, a few decades earlier, which brought immigrants north from fig-growing California. As Italian, Greek, and Portuguese immigrants spread out through East Vancouver, fig trees spread with them, climbing out of back gardens and sending exploratory suckers underneath fences and over brick walls.

Recently, though, fig growing in Vancouver has bloomed in popularity, says Bob Duncan, an orchardist who has planted over 150 varieties of fig in his North Saanich nursery. The oldest, a Desert King, will soon celebrate its 38th birthday. As cultivators like Duncan introduce varieties of fig with rich breba crops, suited to Pacific Northwest weather, the new trees are outnumbering older and less cold-hardy Mediterranean varieties.

“Who brought the first figs to Vancouver, I’m not sure,” Duncan says. “But there’s been exponential growth in interest in fig trees, just in the last 10 to 20 years. And it’s still growing, year by year.”

The summer ripening of fig trees has become part of the rhythm of the Vancouver urban ecosystem, feeding humans as well as birds, insects, and raccoons. Like other trees, figs sequester carbon, cool the environment, and provide shade, but they also mark Vancouver’s cultural and ecological diversity.

“When people come here, they’re always a bit surprised to see fig trees growing,” says David Tracey, a writer and ecologist who works with Vancouver’s urban forest. “They provide a reminder that we’re in this multicultural, weird, hybrid social experiment, where all different influences are thrown together into this not-very-large flat space between mountains and ocean, all getting along.”

Unlike apples or bananas, figs will not ripen once they have been picked, so good timing is vital. A ripe fig will droop slightly from the stem, and its skin will thin, soften, and depending on the variety, change colour. A tiny split or drop of moisture may appear at the tip.

If unripened figs remain on the tree into the autumn, Gilbert says, they should be removed before spring so they do not rot and damage the wood. Warm Vancouver winters are usually kind to figs, he says, but this year may test their endurance. Many fig trees can withstand temperatures down to -15°C, but January’s record-breaking cold may have been too much, especially for young trees.

If a fig trunk dies of the cold, though, there is still hope. Life will often remain in the roots, and if the tree is cut back to the ground, it will slowly regrow.

The Garbuio family sold the old house—it was too large to care for—and the fig trees to another young family in the past year. As January turns to February and the first hopeful crocuses break through the soil, the smallest buds appeared on the tips of Umberto’s trees. Spring brings life to the figs of Vancouver, and summer will bear fruit for a new generation.

Top illustration: May Rivers, from The Fruit Grower’s Guide, 1891. Read more from the Spring 2022 issue.