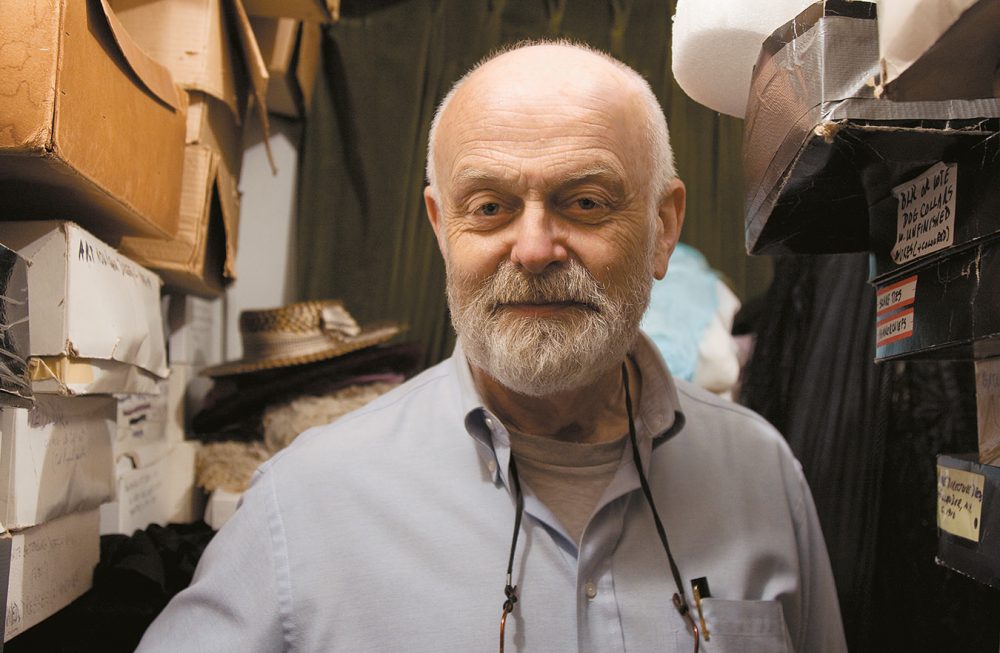 Ivan Sayers in one of the many rooms dedicated to his collection at his East Vancouver home.

An antique bust form dressed in an Edwardian bodice and skirt greets visitors at the door of the home of Ivan Sayers. Inside, the fashion historian and collector’s walls are scattered with historic photos and illustrations in precious tiny frames. Bulbous wooden hat molds occupy shelves high and low, and higher up, a coterie of mannequin heads whisper secretly to one another. Beyond it all is a three-way mirror, where guests might admire the way a sculptural woollen Balenciaga coat, circa 1951, hangs gracefully from the shoulders. Meanwhile, a Madame Grès dress laying inside-out on a trunk reveals the labour intensive zigzag pattern she designed for her seamstresses in 1942, so they wouldn’t be drafted for war work during the Nazi occupation of Paris.

Already it is apparent that it will take more than a few tours to even begin scratching the surface of Ivan’s collection. He started collecting odds and sods at age 13 and is now into his 60s. Growing up in Summerland, B.C., Ivan admits that perhaps he was a peculiar child. Living with his family in Toronto for a year, Ivan attended the children’s educational programs at the Royal Ontario Museum (ROM) every Saturday before reluctantly relocating back to the Okanagan. “There was nothing like it in Summerland,” he recalls, “so I decided I would start my own ROM in the garage. I made little labels for old things I collected—toys, blacksmith equipment, pocket watches, bits and pieces of china. Everything has a story, you know, tells you something. It’s a bit like deconstructing a crime.”

Ivan’s mother, a costume maker, and father, an officer with the Salvation Army, had perhaps unwittingly set the scene for what would later become of their son. “I was enrolled in elocution lessons from a young age because my mother always thought I should earn a living for what I had to say, rather than for what I did. But, I always knew I would deal with history,” he says. So, after high school, he sold everything in his collection but the clothing, and moved to Vancouver to pursue a degree in classical archaeology at the University of British Columbia. Here, a few influential professors taught him “how to look at things. If they could make a Greek or Roman wall structure interesting, surely I could do the same with my old clothes.” The collecting started again with a Victorian dress he bought at the Salvation Army on 12th Avenue in 1965. “I would charm the old gals who worked at the Sally Ann—Gret and Ethel. They would hide items for me up in the attic, for when I’d come in. I’d walk out of there with giant bags of ‘old-fashioned items’, all for a dollar. Sometimes I’d even spend my bus fare, and then have to carry it all home. Actually, they got in quite a bit of trouble for it, so I always promised them that when I wrote a history book one day, I would dedicate it: ‘To Gret and Ethel’ … I found things there that I didn’t know what they were, but I knew they were old. I thought they were interesting, and I thought that someone should save them.” To date, the oldest garments he’s saved are a men’s coat and vest from the 1730s, and a 1750s English embroidered white silk dress with two perfectly matching petticoats—one of which he had found seperately, earlier on.

Always curious to know more, Ivan, a conscientious researcher, began volunteering in 1970 at the Centennial Museum (now the Museum of Vancouver), unpacking and cataloguing their costume collection—something that hadn’t properly been done since the museum moved from Carnegie Centre to Vanier Park in 1968. Volunteer work led to employment, and within six years he was promoted to curator of history—tenure he held for another 14 years.

Meanwhile, Ivan’s personal collection grew and grew. “The other day I had a revelation,” he says. “I looked around and decided that I have enough.” There is very little in his house that doesn’t belong in the collection, save for a few personal photos and his own clothes. “I have 14 dresses from the 1840s,” Ivan says, “eight or nine of which are in muddy shades of green and brown in drab silk taffeta and satin—that drab, Gothic revival, Jane Eyre sort of stuff. But which one do I get rid of? The palate is very rich. It really helps you understand the aesthetic of that time and place. If you have only one, it might be the only one made in that fashion. If you have two, it could be a coincidence. But if you have three or more, it really tells you something.

“But it’s not about me. I want to be remembered for giving more than I took. I may not have children, but I will leave my examination of history to the world.”

“I know the clothes, and I know how to get an audience fired up,” he says; his mother’s insistence on elocution lessons has benefitted him in many ways. The contacts he makes through the charity fundraiser fashion shows he hosts, along with lectures he gives at museums and academic institutions, also often become sources for much of his collection. “The best things come from the fashion shows,” he says, “from older women who have held on to something because of its sentimental value. It might have been their mother’s or their grandmother’s. Sometimes I think they are giving it to me so they can pass on the responsibility of caring for it!”

But not always. Sometimes they just want Ivan to have it. In one fabulous example, a woman wore her black Givenchy gown to an important out-of-town event. A tall, elegant grey-haired man (Monsieur Hubert de Givenchy himself) spotted it on her and asked if she would kindly give it to him for his archive once she no longer wanted it. When the day came, she gave it instead to Ivan. He jokes, “A man never knows where he’ll get his next dress.

“But it’s not about me,” Ivan says. “I want to be remembered for giving more than I took. I may not have children, but I will leave my examination of history to the world.” As such, Ivan and a small group of friends and fellow collectors created the Original Costume Museum Society in 1993, with plans to one day open just that: a museum of clothing and textiles in the Lower Mainland. But until it happens, Ivan will continue housing his collection in his East Vancouver home. “And if the house burns down,” he says, “I’ll wait until the dust settles and sell the land. Then, I’ll move into a basement suite and start all over again. I just can’t think of anything better to do with my time.”