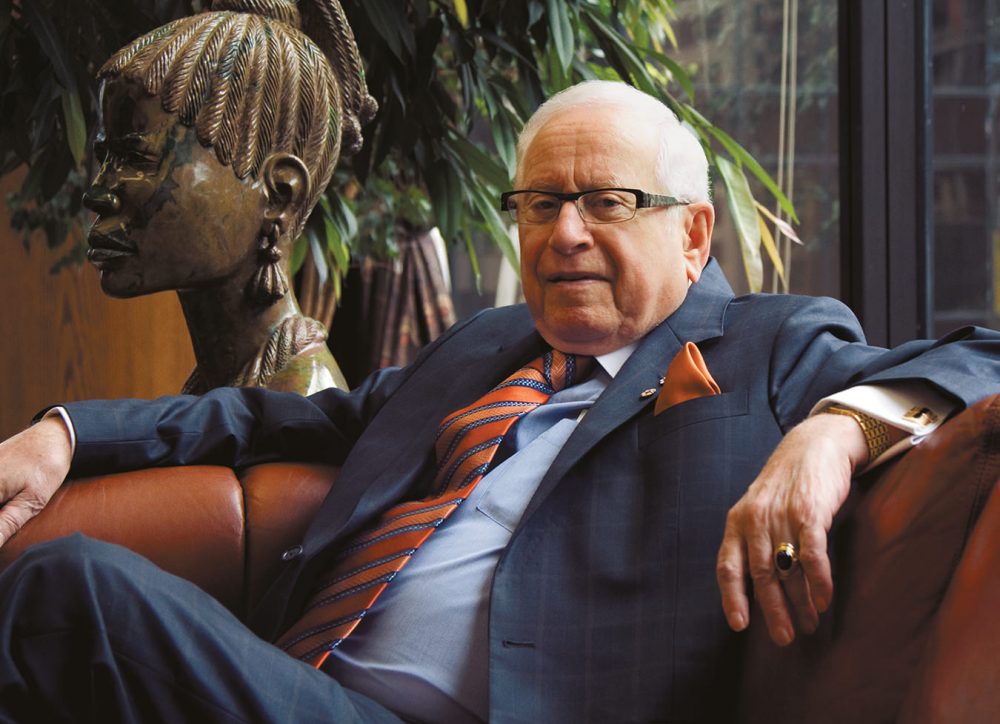 “If you live in a community, you take something out of that community. You’ve got to put something back into the community.” That’s a core belief that has motivated entrepreneur and Canadian merchandising legend Joe Segal’s generous philanthropic efforts since he first started in business in Vancouver more than 60 years ago.

After two and a half years in the Canadian Army, serving overseas during the Second World War, Joe Segal settled in Vancouver in 1946. He went into the war surplus business and still remembers his struggle to expand that original enterprise. Segal was new to the community and hadn’t yet established a solid banking relationship. He needed $50,000 to grow his fledging business to the next level. “So, I went to a friend and he lent me that $50,000. Now, it didn’t mean a lot to him—he was established. But it meant a lot to me,” Segal relates.

Segal went on to found Fields Stores, building a merchandising empire that at one time included Zellers and the Bay. Then, with his company Kingswood Capital, he made his mark in manufacturing, real estate and venture capital funding. Since then, Segal has helped many “friends” get started in business or expand their existing ventures. Now in his mid-80s, he continues to help others get started. He is at his downtown office each day, still overseeing a wide range of operating businesses and real estate assets.

“It’s easy to go through life and do everything for yourself. But you live in a community and you have to live with some compassion.”

But today it is his charitable work, the quiet acts of giving, that brings lasting satisfaction to Joe Segal, which he does with little fanfare. “It’s not acknowledgement that motivates giving,” he explains. “It is the simple fact that you can look at yourself in the mirror and say I have done something for someone. It’s easy to go through life and do everything for yourself. But you live in a community and you have to live with some compassion.”

The obligation to be charitable is deeply ingrained in Joe Segal. “Charity is asking yourself, ‘If I can do it and I don’t do it, then why?’ Then you consider it again, and you say, ‘I can do it and I am going to do it.’ It’s not the big stuff. It’s the little stuff,” he explains. Segal, along with his wife, Rosalie, are widely recognized as much for their philanthropy as for his business acumen. The couple’s compassion is legendary in British Columbia.

The Segal name is most prominent at Simon Fraser University, where Joe Segal is a chancellor emeritus and where he has for more than 20 years championed the university’s expansion into downtown Vancouver. He spearheaded the fundraising campaign to establish SFU’s first downtown Vancouver presence at Harbour Centre, where one of the main function rooms bears the couple’s name. Segal and his wife also played a leadership role in the creation, development and renovation of SFU’s Morris J. Wosk Centre for Dialogue. Dr. Rosalie Segal, who was conferred with an honourary doctorate of law from the university, has quietly assisted dozens of SFU students with special needs. In 2002, the Segal family donated the former Bank of Montreal heritage building at Granville and Pender to the university, and it become home to the renamed Segal Graduate School of Business.

Though Segal has been recognized with the Order of Canada, the Order of British Columbia, the 2005 Variety Club International Humanitarian Award and countless other awards, Segal reaffirms that it is the small giving—the compassionate acts of kindness that are made without recognition—that he truly believes are most important. “You’ve got to give people a hand up—the proverbial hand up. That way they will improve themselves.” Knowing that there are segments of society that have a tougher time finding charitable support, he and his wife have targeted much of their philanthropic efforts to helping in this area. “Sure, these people can go to certain institutions and get a little bit of help. But nine times out of 10, if you don’t fall within the institution’s budget, you’re out. Helping those people who fall between the cracks is the most important aspect of giving.”

“To learn to give is an education. But you can’t get philanthropy out of a textbook. Philanthropy is taught by example.”

For almost 40 years, Segal and his wife have provided a special opportunity for small charitable organizations with little profile in the community, to raise funds and establish relationships with new donors. The Segals invite these smaller charities to host fundraising dinners at their home. They underwrite the events and often invite people from their circle of friends and contacts. “Sometimes it’s four or five a year and sometimes it’s 10 or 12 a year. The purpose of it is to allow an institution that has no exposure in the community to gain a little bit of a foothold,” Segal explains. The dinners can raise anywhere from $100,000 up to one or two million dollars. “People come—and they know it is going to cost them some money. Many of the people who come to these dinners leave with a feeling that they have done something worthwhile—that they’ve helped an organization.”

With regards to how he decides which charity to support, Segal says, “I help where it is most needed. It doesn’t matter whether it’s an organization from the arts community, a family service agency, or whatever. I assist organizations from a broad spectrum because everything is important.

“To learn to give is an education,” Segal says, believing people learn how to be philanthropic. “But you can’t get philanthropy out of a textbook. Philanthropy is taught by example.” Over the years, he has seen many situations where children follow in the footsteps of their parents when it comes to charitable giving. “If the parents give freely within their means, the children give freely within their means. If the parents can’t make donations because they just don’t understand, the children tend to be the same.” Segal believes that very few people will give away anything that they’re going to miss, so he simply encourages charities to ask.

Perhaps the strongest motivator for Joe Segal’s legendary generosity is what he calls his golden rule: “There but for the grace of God go I.” “That’s the golden rule,” he says. “Then, if you can help to ease a little pain, you do so. It doesn’t matter what it is. The little things have more effect than the big things. There are lots of people running the bus, but very few people pushing the wheelchair.”