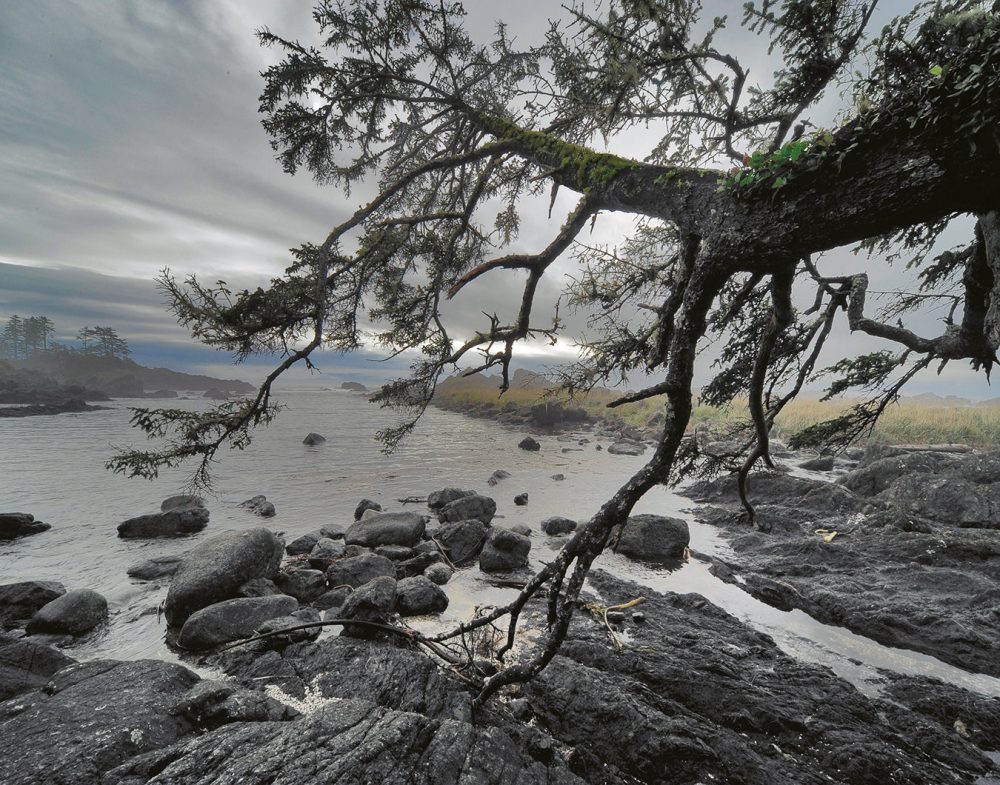 The shores of Ucluelet.

To many visitors, Ucluelet is just a sign on the highway on the way to Tofino, a left hand turn instead of a right. But they’re missing a lot, no matter what time of year it is.

“You should have been here yesterday,” says Adele Larkin, manager of the luxurious Black Rock Oceanfront Resort in Ucluelet. “Our windows are four stories high, but wild waves had no problem covering them with masses of frothy seafoam.” In winter, winds can hit 100 kilometres an hour on the dramatic west coast of Vancouver Island, where dense scrubby shore pine is permanently swept back like Donald Trump’s hair, proof the trees know where the prevailing winds blow. I checked into the resort in early January, hoping to see a perfect storm. The storm-watching season begins in November and carries through to the end of February, but the most intense period lasts from December through February. It’s worth planning now for a trip this winter.

Storm watchers will be swept away by Black Rock’s sincere and welcoming staff, breathtaking seaward views, tranquil spa services and expansive spaces. The roomy feel carries over into the resort’s guest rooms and suites where the modern architecture highlights rock, water, glass, steel and wood. Guests may never want to leave, and they don’t have to: units are for sale from $250,000.

One of the big draws at the resort is their contemporary, multi-level restaurant, Fetch. (“Fetch” is an oceanography term referring to the distance a constant wind blows across a body of water.) Executive chef Andrew Springett (formerly of the Wickaninnish Inn) serves generous portions from his something-for-everyone menu that includes inspired market-fresh salads, wholesome organic Pemberton beef burgers and wild B.C. salmon with luxurious spot prawn risotto in a Dungeness crab bisque. In summer, the dining room opens to an oceanside patio. There are good strong winds, high tide and heavy surf when I wake up; and the water is frosted with foam. Seafoam is created when high winds and waves churn air into the water to create bubbles of dissolved organic matter, such as algae and the tiny skeletons of a type of phytoplankton called diatoms. The effect is quite spectacular, especially when high winds are whipping the critter litter into a foamy frenzy.

Ukee, as the locals call Ucluelet, is a base for the Wild Pacific Trail, a superb wilderness coastal setting for walking and hiking adventures and accessible to all ages and abilities. I head out in the morning to hike with “Oyster Jim” Martin, a local resident and the visionary for the trail. The 8.5-kilometre hiking trail has been hand cut and winds through the ancient rainforest with viewing platforms exposing visitors to miles of rugged and rocky shorelines. (From late February to May, hikers can watch the Pacific gray whale migration when some 20,000—virtually the world’s entire population—pass by Vancouver Island.) “I’ve never seen the tide so high or the rocks on shore completely covered in foam,” says Martin. In fact, the winds are so strong, I do not see a surfer for the 48 hours I am there.

Dinner in the evening is in town at Norwoods, a casual but serious wine bar owned by chef Richard Norwood. This is a neighbourhood restaurant you wish was in your neighbourhood. Feast on mussels in Thai-style curry with a taster of Wild Goose Gewürtztraminer, a lamb rack with Pascual Toso Malbec, and silky chocolate espresso mousse for dessert.

Later, the weather outside is frightful; luckily, I’m in Black Rock’s Float Lounge having a nightcap at the wavy bar where the Hendrick’s Caesar is legendary. This is storm watching in style.