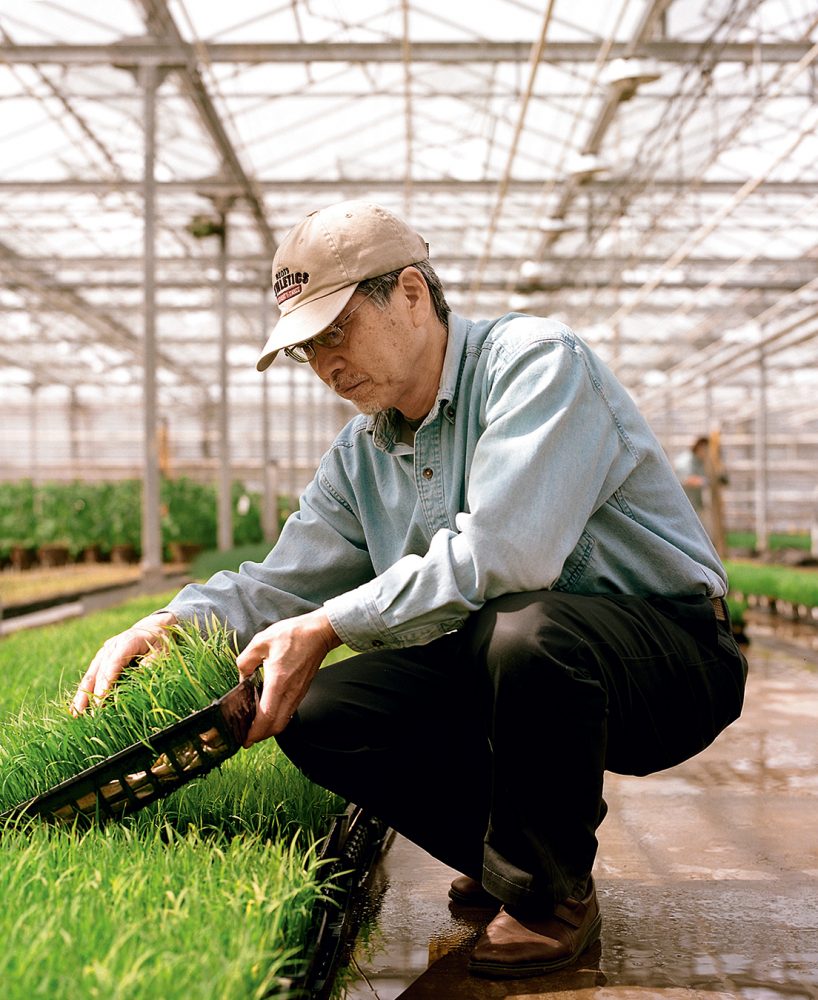 Masa Shiroki, the first person in Canada to craft rice into sake by hand, looks around his 1,000-square-foot shop on Vancouver’s Granville Island and glances up at the catwalk-sized loft. “I want what the other [winery] guys have,” he says. “A château. With one difference—no grapes.” It’s a big dream for his little grain.

Venerated sake wineries have existed for centuries in Japan, though as demand for the artisan product declined during the economic downturn of the 1990s, many had to shut their doors; Japanese tastes turned to international wines and other less expensive beverages. On the opposite side of the Pacific, artisan-made sake remained unfamiliar to most North Americans—the majority having never tasted any sake at all. Those who had may only have known lower-grade U.S. products made from table-grade rice and served hot with Japanese food. But the genuine article is so much more.

Artisan sake may be pasteurized or not, sparkling or still, dry or sweet, cloudy or clear. Its hue can range from colourless to golden, and its character can be changed by the degree of polish received by the rice, the temperature at which the sake is made or served and for how long it is matured. Its mouth-feel might be oily or slip across the palate like silk from a shoulder. Shiroki points out that in recent years, sake has graduated from a class of wine paired strictly with Japanese food; in 2001, the World Association of Chefs Societies held a conference in Kyoto aimed at promoting sake to Western palates. Now, international chefs and sommeliers in the finest establishments worldwide pair it with everything from appetizers to dessert.

As the business development manager for eight years at the Ministry of Employment and Investment’s B.C. Trade and Investment Office, Japan Trade Branch, Shiroki helped facilitate Japanese investments in B.C. and assisted suppliers seeking to expand their markets abroad. However, his career as a government guy abruptly ended when his department was closed in 2001. Too young to retire, he looked for something that would capitalize on his love of marketing and have profound Japanese roots. Given his knowledge of the market, he was aware that virtually no premium sake brands were available in Vancouver at the time. Shiroki obtained an importer’s license in 2002, and though he worked diligently to promote premium sake through speaking engagements, media interviews and lectures for sommelier schools and liquor store employees, interest wasn’t picking up as quickly as he had hoped.

Though his present operation is small, Shiroki’s dreams are supersized. … He wants to grow sake-grade rice in Canada on a scale that would enable him to create jizake, or local sake, produced by his own land based winery.

By 2007, the locavore movement was beginning to gain traction, encouraging many Canadians to become more conscientious about the environmental footprint of their food and beverage consumption. It occurred to Shiroki that Canadian consumers might start taking ownership of the product if it were made locally. Shiroki dug deep into his pockets to fund the start-up of his Granville Island operation.

Shiroki’s hands-on method is laborious. First, he washes the rice, then steams it in 30-kilogram batches. Because rice has no natural sugar to initiate fermentation, Shiroki creates a starter mash, or shubo, which means “mother of sake”. Shubo contains yeast and Koji rice affected by Aspergillus oryzae, an enzyme that breaks down starch to produce glucose. Incrementally, he adds more steamed Koji and water to the mash to increase its volume. Once mixed, the batch ferments at cold temperatures in the large stainless steel tanks. With large paddles, he and his staff stir the mash, now called moromi, twice daily to oxygenate it and to give it an even and steady fermentation. After about 25 days, the moromi is gradually pressed in a stainless steel box known as fune. Then, in a settling tank kept at sub-zero temperatures, the cloudy liquid separates and clear wine rises. Using this process, Shiroki produces about 12,000 bottles bearing the Osake label annually. He broke even the first year.

Although sake is a traditionally Japanese wine, Shiroki admits his approach isn’t strictly Japanese. While he maintains the traditional method, he has also found improved ways of employing age-old techniques. He describes two views of culture: one where tradition must be preserved in its purest form, the other where it evolves. He understands the Japanese government’s concern that cultural phenomena outside Japan are less than authentically Japanese, but also acknowledges that perhaps the extent to which one culture assimilates the tradition of another is evidence of its original power.

“Nobody has said that my sake is not truly Japanese, but I’m sure that a number of people have thought that it is not.” However, Shiroki makes sake for Canadians with different expectations, just as vintners in Japan produce grape wines for Japanese tastes. At present, Shiroki’s Osake brand includes six nama, or unpasteurized, sakes: a full, creamy tasting Junmai Nama Genshu, well-paired with duck or strong cheese; a lighter Junmai Nama, with multiple fruity notes, such as pear, citrus and melon, suitable for salads, fish or shellfish; a piquant Junmai Nama Nigori, well-matched to chicken or pork; and Junmai Sparkling Sake, a complement to appetizers, lobster or crab. The other two Junmai Ginjo sakes, in clear Genshu and cloudy Nigori Genshu styles, are dry and rich and display the complex characters found in premium Junmai sake. Shiroki attributes these singular qualities to the character of local water.

Though his present operation is small, Shiroki’s dreams are supersized. No, he doesn’t want to become a national brand or pump out millions of litres. Rather, Shiroki wants to grow sake-grade rice in Canada on a scale that would enable him to create jizake, or local sake, produced by his own land based winery (LBW). Pre-germinated seeds, which are spread over seeding beds in a blend of peat moss, soil and other nutrients, to grow rice.

In 2010, Shiroki started experimental plots in Agassiz, Ashcroft, Kamloops, Peachland, and Duncan to grow rice using both wet- and dry-farming methods. After assessing the terroir, he has decided to expand to one hectare (2.5 acres) in the Fraser Valley with the hope of producing wine that is 100 per cent his own. Though his Kamloops and Ashcroft crops were successful, their location was problematic. “I have to be careful where I choose to put these acres. I have obviously to respect the terroir and the irrigation possibilities. But if you are in the middle of the boonies, who will come unless you are part of the Wine Trail already established in the Okanagan and developing in the Fraser Valley?” he asks rhetorically.

Before he is able to use his crop to make sake, however, Shiroki must contend with British Columbia Liquor Control and Licensing Branch regulations. Essentially, he’s going to have to convince the government to change the rules; only honey, tree fruits and grapes currently qualify as LBW crops. Rules don’t change often, he says, but they have in the past, and Shiroki seems content to venture into this gray area, carving his own path.

Initially, it might have seemed unlikely that sales of handcrafted sake products could make a significant dent in the Canadian wine market—these are highly competitive times. Growing rice and developing a jizake market in Canada? Will it fly? The fact is, Canadians consume about 15 litres of grape-based wine per capita per year, in addition to spirits and beer. Would substituting or adding a litre of artisan sake to that lineup be an unrealistic expectation? Perhaps not.

“Many years ago, no one thought that Canada would become a great wine country,” he recalls. But how do you get from 1,000 square feet to a château? Shiroki tilts his head and draws a long hissing breath between clenched teeth, a typically Japanese utterance that might mean “I don’t know” or “that’s very difficult”, before finding an upbeat answer. In July 2010, Township 7’s 2007 Chardonnay was served to the Queen on her tour of Canada. “I remember when Township 7 was just a tiny little dinky hut,” he says. And already a year earlier, Osake Sparkling Sake had been selected by the Japanese Consulate in Vancouver to toast the Emperor and the Empress of Japan upon their visit to Canada. Maybe the château isn’t such a long way off.