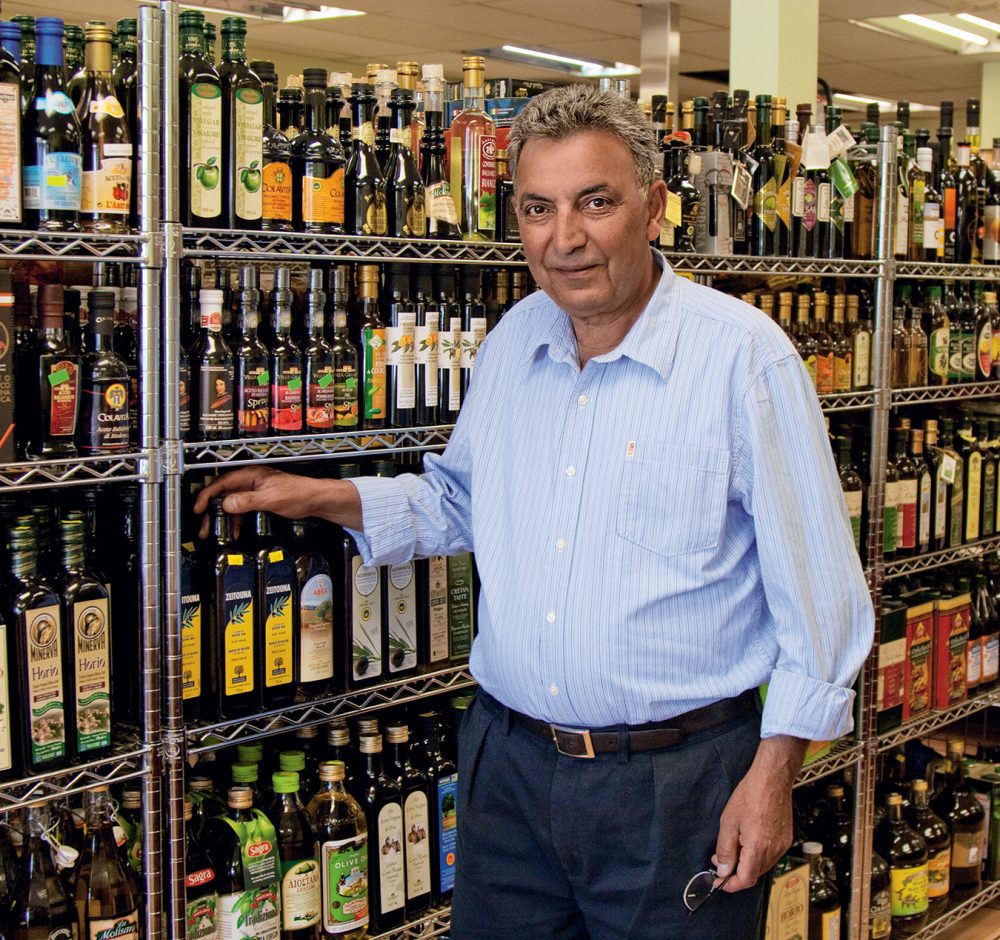 Jack Elmasu among his selection of olive oil at Mediterranean Specialty Foods.

Mulberry jam from Damascus. Harissa from Tunisia. Rosewater from Lebanon. Halloumi cheese from Cyprus. These are but a few of the myriad exotic delicacies that populate the shelves of Mediterranean Specialty Foods on Commercial Drive. Presiding over this gourmet’s nirvana is Jack Elmasu, a Palestinian-born Vancouverite by way of San Francisco and utterly charming man.

Elmasu’s love for food was nurtured in his family’s kitchens in Jerusalem. “I learned lots from my grandmother, from my aunt, and cooking is something I’ve enjoyed doing,” he says. Scents from the dishes of his childhood still perfume his memory. “I remember the jams my grandmother used to make, especially her grape jams bubbling over a fire made with wood from the grapevines. She cooked dishes that changed with the seasons. Grape leaves for Easter, young and tender and stuffed with meat. And she preserved things like white beans and lentils to keep them for winter.”

Always quick to offer customers a word of advice or a witty anecdote, Elmasu has been sharing his voluminous knowledge of Middle Eastern food with Vancouverites since 1976. That’s when he bought his first store at Kingsway and Victoria on a whim. “At 3:30, I saw the For Sale sign, and at 5:00, I bought the store with $10 down payment.” He originally intended to open a restaurant, but quickly capitalized on the dearth of readily available Mediterranean products. “I wanted to offer something that nobody else had. Middle Eastern food was very hard to find in Canada at that time, except in Montreal. Before I started importing, there were only two or three types of olives from Greece and only two types of olive oil sold in Vancouver.” How times have changed. Elmasu scoured the Middle East to source his goods; today, he carries over 100 varieties of olive oil from Portugal to Turkey to Morocco. He readily chooses Zeitouna brand from Palestine as his favourite. “I know the area well—it’s made in Ramallah, my mother’s home town. The ancient olive trees grow on rolling hills in a region with very little water. This makes the trees hardy, and they bear smaller, sweeter fruit than the larger, tasteless olives coming from California.”

Elmasu strolls through the aisles noting some of his favourite products. From a burgeoning cheese case, he singles out kefalograviera, a salty Greek sheep’s milk cheese that’s fried to make saganaki, or served as a table cheese with red wine. He stocks a panoply of olives—preferred varieties include green cracked Nafplion olives, which have a slightly bitter flavour, and large round Volos black olives, which have a milder taste. And his delicately flaky pistachio baklava—made in-house, of course—is a dessert lover’s delight.

Unique to Mediterranean Specialty Foods is an air-dried cured meat called basturma, a centuries-old Middle Eastern delicacy. It starts with eye of round pressed slowly to release about 40 per cent of its moisture before being salt-washed and air-dried. The pressed meat is slathered in a paste called çemen that includes garlic, fenugreek and Hungarian paprika. It’s then hung once more until the coating is completely dry. The 21-day process is an exercise in patience, a balancing act of timing, heat and ventilation. “I first made it over 15 years ago, but it took me about two years of trial and error to figure out the recipe,” Elmasu reflects. “It’s one thing to know the steps, but it’s a totally different thing to make it.” Served thinly sliced, basturma can be eaten on its own with pita or lavash, fried in olive oil and served with eggs or used as a pizza topping. Garlic fans will be powerless to resist its aromatic charms.

With more than 35 years in the business, Elmasu is still going strong. He knows his regulars by name, knows what they like on a sandwich, can put a finger on exactly the rare ingredients they seek. “I love what I do,” he says with a smile. “I love coming to work every day and joking with my customers. It’s part of me.” We are, indeed, fortunate that he carries on as our convivial gatekeeper to the land of olive oil and honey.