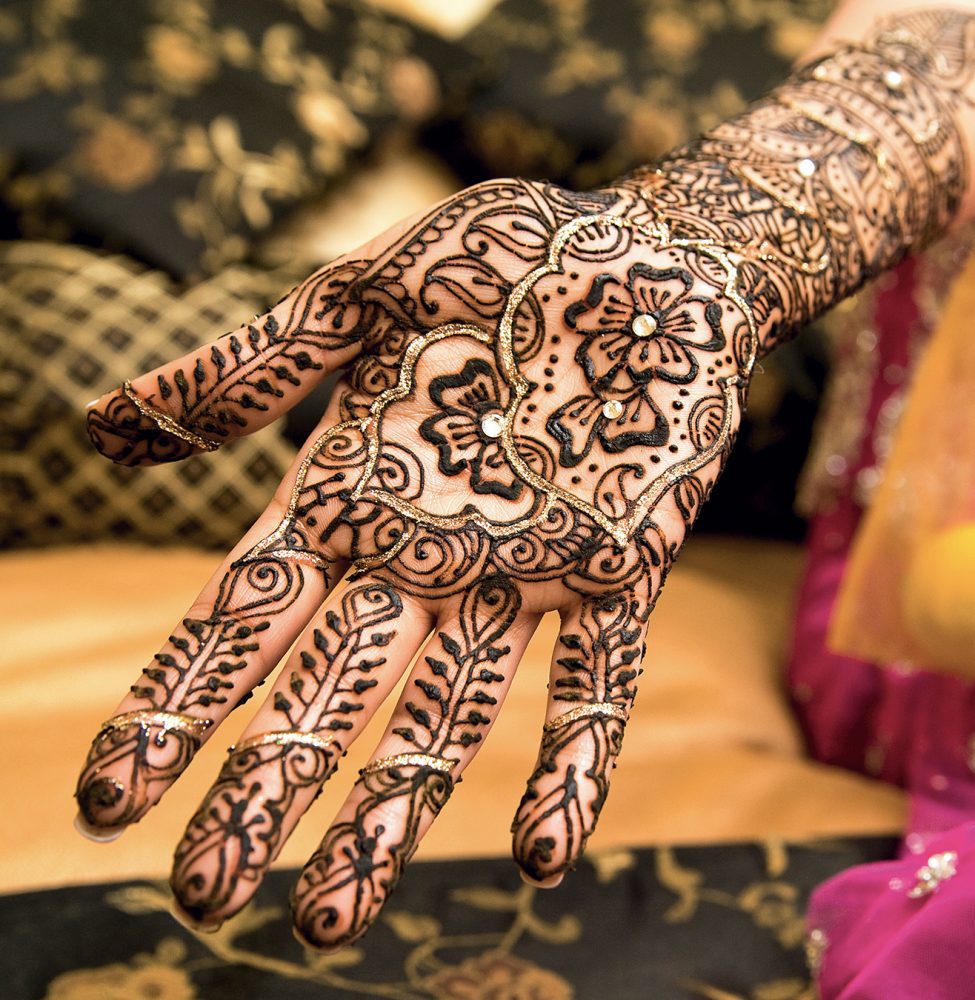 Centuries ago, throughout ancient Egypt, the Middle East and southern Asia, a common plant was used as a botanical medicine to treat many common ailments. This plant, known as Lawsonia inermis, was made into a paste and spread over the skin for its deep, cooling effect. The beautiful red dye it left behind soon became a decorative element in celebratory aspects of life. In Egypt, deceased pharaohs would have their fingers and toes stained prior to mummification; later, Indians and Persians would use the paste decoratively for weddings and burials, as well as for members of royalty. Today, we know Lawsonia inermis by its more common Arabic-derived name, henna, and by the celebrated Hindi art of applying henna to the skin, mehndi.

Watching a modern mehndi artist at work can be mesmerizing. The tip of her henna-filled cone, poised over a blank canvas of skin, dances back and forth, up and down, leaving behind an intricate filigree of designs. Mehndi artists have been known to sketch out elaborate peacocks, flowers, feathers and waves, to name just a few of the endless possibilities.

Iti Kalsi, a mehndi artist who has been practising in Vancouver for almost 20 years, explains the process of making henna paste: the henna plant is harvested twice a year in warm regions like India, and the dried leaves of the plant are crushed and powdered before being mixed with water and essential oils to make a smooth, dark green paste. Kalsi uses 100 per cent natural henna imported from India to ensure her mehndi is pure and chemical-free, noting that henna with added dyes is not recommended for the skin. Hers leaves an equally deep mahogany, burgundy or burnt orange colour, which is so desired, especially by brides. “While I do festivals, birthday parties and other special events, my most common clients are brides,” says Kalsi. Bridal mehndi is a rite of passage that most Indian brides look forward to. Usually a celebratory evening is dedicated solely to decorating the bride’s hands and feet, and the hands of her close family and friends. “Depending on the complexity of the design, it can take anywhere from four to twelve hours,” Kalsi explains. To obtain the darkest colour possible, the henna is left on for six to eight hours and sometimes even overnight. When the henna is removed, the dyed areas begin to oxidize, causing the mehndi to continuously darken for the next 48 hours.

“There is a myth that the darker the colour gets, the more the mother-in-law will love and cherish the new bride. Most mother-in-laws stress that the mehndi should come out dark. I always joke back that it is their love that will determine the colour,” Kalsi says with a laugh.

Farzana Rayani, a Vancouver mehndi artist who recently relocated to Calgary, says bridal henna was originally used to calm anxious brides. “The cooling properties of the henna drain the body of heat and force the anxious and stressed-out bride to settle down,” she says.

Over time, it has become as much an artistic practice as a therapeutic one. Rayani passionately explains how mehndi is her avenue of expression. “I do it as much for me as I do it for the bride. It’s my zone, my outlet, my meditation. I can just get lost in it,” she says.

Some brides request to have the groom’s initials hidden on their decorated palms—a nod to the old myth that a marriage cannot be consummated until he spots the letters concealed in the design. “Mehndi is considered a huge aphrodisiac,” says Rayani. “Some say it’s the eucalyptus oil, but I think it’s more than that—there is something simply magical about mehndi.” Surely the intricate art will continue to seduce and enchant us for ages to come.