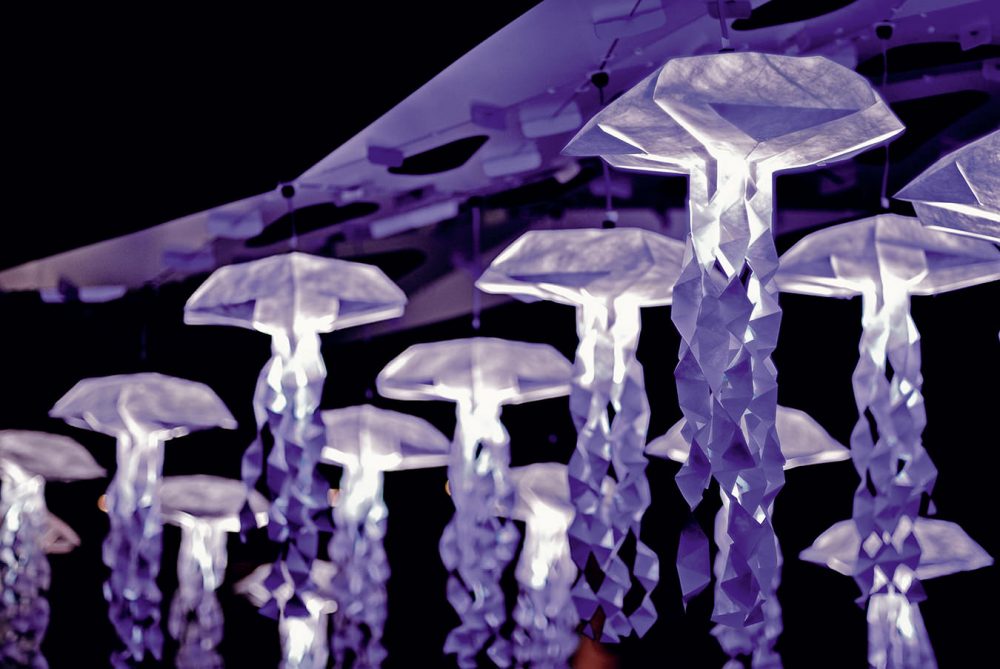 Jelly Swarm at the Vancouver Aquarium.

Some say there are no such things as adults; we’re all just 12-year-olds in adult bodies. One of these is Alex Beim, the creative genius behind Vancouver-based experimental design firm Tangible Interaction. The product of Tangible Interaction’s work takes participants on a journey into a fascinating world where art, design, and technology combine to evoke moments of childlike wonderment.

“I hate being called an inventor,” Beim says humbly. “I don’t really invent anything. I think all I do is connect things in ways that maybe other people do not.” Fans of his work, however, would disagree, describing his creations as captivating installations and interactive experiences that can make full-grown adults giggle like children. A hybrid hacker/visual artist, Beim combines technology like RGB LED modules, motion sensors, wireless transceivers, thermal cameras, projectors, and complex software with the creativity and craft of a master sculptor. The results are dazzling visual and auditory experiences that engage participants on a sensory level. Most important to Beim is to focus attention on the experience itself—often manifested as dancing, coloured lightscapes—while keeping the technology hidden. To experience a Tangible Interaction installation is to experience light and dark, seeing and not seeing.

Tangible Interaction’s first products after Beim founded the company six years ago were aptly named Zygotes—large, lightweight, helium-filled balls that respond to motion, sound, and human touch. At first glance they look like oversized beach balls, until you tap, bounce, or punch one and see it change colour. At the same time, they can also respond to music, thanks to complex electronic components wired within them. These “toys” are so effective at creating a playful frenzy in a crowd, musical acts like Jamiroquai, the Chemical Brothers, Arcade Fire, and even Blue Man Group have used them in live performances.

Another creation of Beim’s, called simply Graffiti Wall, consists of infrared camera and projection technologies. Participants use a digital “spray can” to paint with light, creating colourful graffiti art on a large wall in real time. A quick reset and the wall is erased so the next user can start over with a fresh canvas. It has been such a hit with event crowds that Beim was invited to create two massive Graffiti Wall installations for the grand opening of a Chanel store in SoHo, New York. A star-studded crowd consisting of actors, artists, models, and fashionistas fought for the chance to play. Even Karl Lagerfeld showed off his street art skills. Most of Beim’s commercial projects are for corporate clients, surprisingly few of which are based in Vancouver. One notable exception is the Vancouver Aquarium, where Beim recently collaborated with local origami guru Joseph Wu to create Jelly Swarm, an interactive art installation inspired by the luminescent jellies found off the coast of British Columbia. It was so loved by crowds that the Aquarium plans to repeat the exhibit annually.

Another local project was Picidae Chorus, a public art installation commissioned by the city as a part of Vancouver’s 125th anniversary celebrations. It featured a series of colourfully glowing geometric acrylic birds that knocked like woodpeckers on the trees in Stanley Park.

Beim says his motivation comes from how he viewed the world as a boy. “It’s hard to explain, but I feel that I’m capable of feeling the world in ways that surprise me.” Sensitive and perceptive as a child growing up, Beim now draws on that youthful curiosity in his career to reinvent and reimagine his surroundings. “I love being able to change things. It’s so rewarding to change the world around me.”

Born and raised in Uruguay, Beim immigrated to Canada 15 years ago to be with his future wife, leaving behind a thriving graphic design studio. Not long after arriving in Vancouver, Beim earned himself the title of associate creative director at Tribal DDB, a digital advertising agency, where he created award-winning work for some of the world’s most recognizable brands, but it didn’t take long before designing beautiful websites and interactive advertising campaigns was no longer enough for him. “I’m not really a graphic designer,” Beim says. “I’m not really an interactive designer, either. I consider myself an artist who enjoys creating experiences for others.” So, off the side of his desk, Beim began experimenting with technology. Hence, he conceived of Zygotes, and Tangible Interaction soon after.

The Vancouver 2010 Olympic Winter Games were exceptionally busy for Tangible Interaction. With little prep time, Beim and his crew designed, engineered, and produced 16 separate interactive installations for the festivities. Among them were the Voice It Table and LED Chandelier at the Vancouver House, the Digital Media Room at the B.C. Pavilion, the Seed of Truce at the Vancouver Public Library, and the unforgettable Zygotes used during the closing ceremonies.

To say the future for Beim looks bright is an understatement. He is currently working on a project in collaboration with New York–based artist Zach Lieberman for the London 2012 Summer Olympic Games, which they predict will be the largest interactive art installation ever made. His team is putting the finishing touches on an interactive light and sound sculpture called Halo, financed by a grant from B.C.’s Interactive Fund. And Tangible Interaction will release its first commercial product this year, a geometric lamp kit called Domo, designed to be as much experiential as it is functional. With simple do-it-yourself assemblage, the lamp is a geodesic shape that is black on the outside and a bright colour on the inside. “We designed the lamp so that people can experience putting something together,” Beim explains. The goal is to engage Tangible Interaction’s growing fans with a product they can own, participate in making, and enjoy.

People are typically creatures of habit, but for Alex Beim, change and reinvention are where he thrives. Using creativity and science, Beim is not only developing a thriving business, but challenging perceptions of what art is and can be. Delightful, wondrous, spellbinding—those are just a few of the myriad possibilities.