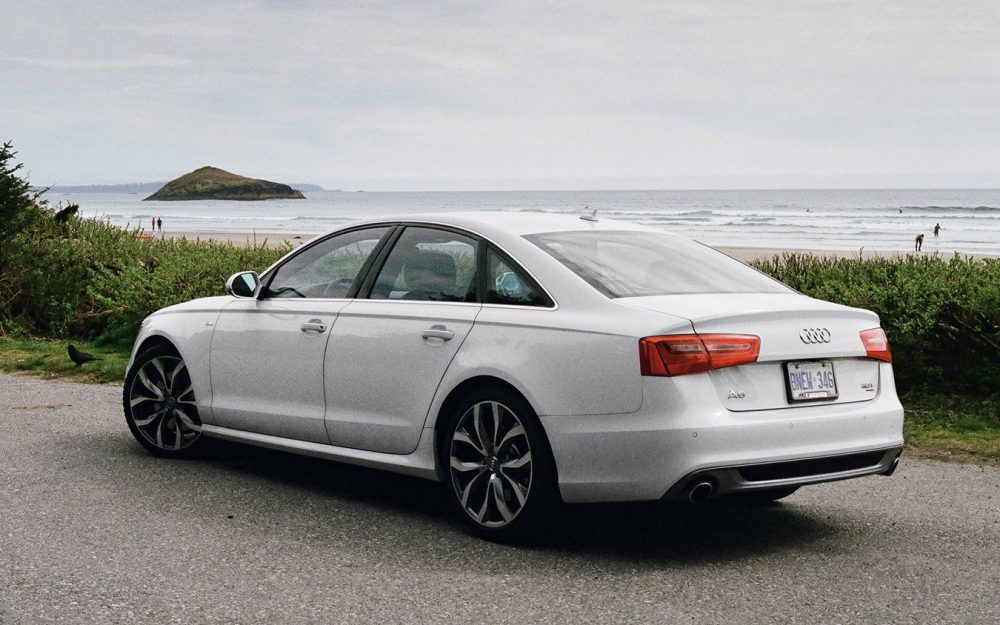 What to do with a brand-new Audi when it’s offered up to you for the weekend? Now, isn’t that a delightful problem to have. A road trip, naturally, but where to? Well, if life is going to sit you in the lap of luxury, you might as well live life to the fullest. Destination: Tofino, and more specifically, the Wickaninnish Inn. After all, it would be an injustice not to find out how easily this car can handle the undulating obstacle course that is Vancouver Island’s Pacific Rim Highway.

Douglas Black, Audi Canada’s national training manager, isn’t nearly as enthusiastic when he hands us the keys to a sparkling-white fully-optioned 2012 Audi A6. “Just watch for potholes in the road,” he says, a quiver in his voice induced by the notorious route we’re about to take—a horse trail if ever there was one. “These are awfully low profile tires, and I don’t want to get a call from you telling me you’ve got a flat.” I reassure him, though, that Audi’s complimentary 24-Hour Roadside Assistance program will take care of it.

Sitting in the cockpit ready to launch, Black gives us a quick orientation, and soon enough we’re off. Essentially, the gist of it is not to think about much; let the A6 figure it all out for you.

Still humoured, the following list of examples, though not exhaustive, epitomizes the simple, titillating ingenuity built into the vehicle. To begin, even the slightest hint of drizzle will automatically prompt the windshield wipers to initiate. Or, if a car approaches your blind-spot, an indicator on the side-view mirror will light up to let you know. Flashing arrows animate the dashboard when you encroach too closely on an obstacle in front of you, and when you ignite the engine, a multimedia display unit ejects futuristically from hidden within the console. Input your destination into the Google Earth–operated navigation system, and the car will even show you where to drive. All you really need to decide is which SiriusXM Radio station to set the 1,300-watt Bang & Olufsen sound system to. We decide on Backspin (old school hip hop, obviously) as the soundtrack to our personal episode of Pimp My Ride. Arriving at “the Wick” feels like a bit of an antithesis at first, painful as that may be to admit. But, the way the A6 hugs the highway curves—like a low-slung slingshot that shoots you around each bend—is a joy ride that almost shouldn’t be allowed. The ride is so smooth, so much fun, that by the time you arrive at your destination, you’ll want to turn back so you can do it all over again.

Once you’re settled in, though, you realise the Wickaninnish Inn is a word-class luxury resort, equally as attentive to detail as Audi when it comes to optimizing your experience. From the deluxe west-facing suites in the newly renovated Pointe building, guests literally have it all. Need binoculars to take in that incomparable oceanside sunset view? Don’t worry, a pair of Bushnells are already in the room waiting for you, as are rain-slickers, gumboots, and a flashlight for that starlit midnight stroll along the beach that just occurred to you. And when you return to the suite, you’ll be impressed to find housekeeping has already replenished the oil in your candle lantern, and set the mood. And while we’re on the topic of test-drives, let’s talk about the hotel’s specially-customized mattresses, which Wickaninnish Inn staff took turns trying out, to ensure the only crash you have over the weekend is the best kind ever.

A car so exhilarating, you never want the road to end. A hotel so luxurious, you loathe to think about the drive. Who would have guessed two things so well-suited for each other could be more at odds? But Audi and the Wickaninnish Inn are both working hard so that you don’t have to.