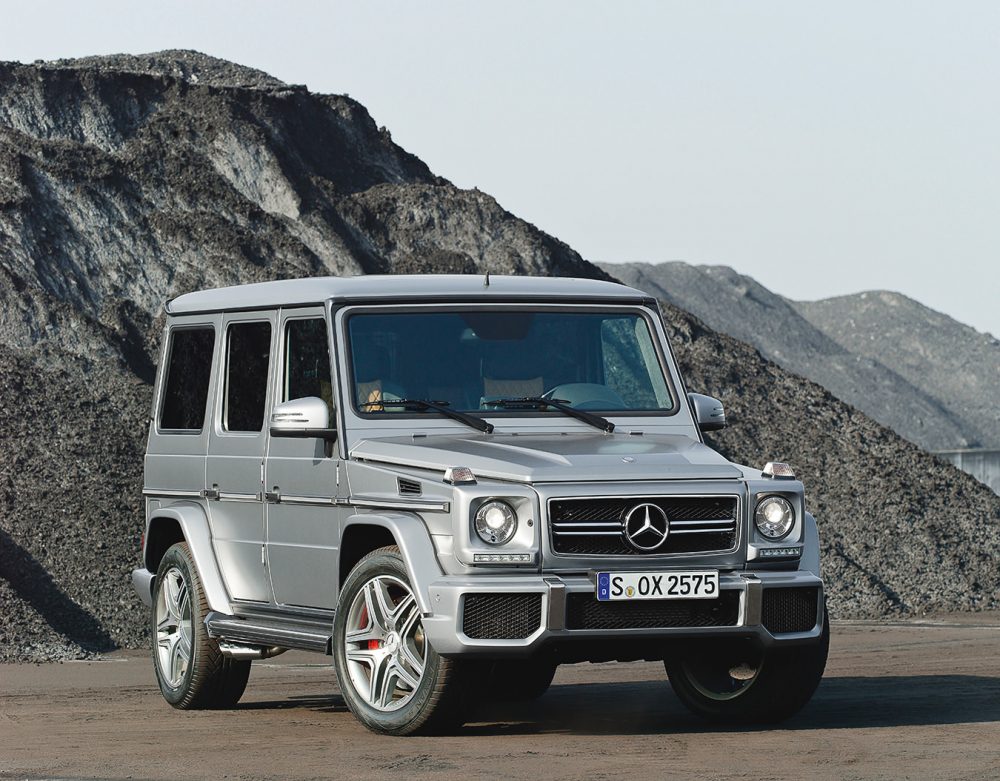 It’s a recipe ripe for disaster: create an off-road terrain course that’s just shy of impassable, and then let a whole group of journalists loose in a fleet of legendary—and expensive—Mercedes-Benz G-Class SUVs. No wonder the folks from Mercedes-Benz are nervous. But then, how else do you prove that the newly redesigned G-Class hasn’t lost its unstoppable off-road prowess in the process of gaining newfound luxury?

At first, the route doesn’t seem so bad—a bit rough and muddy, but nothing that requires engaging any of the three differential locks. (The G-Class uses a 4Matic permanent all-wheel-drive system that offers low-range gearing and differential locking for tough terrain.) The first real challenge is an extraordinarily steep hill with a sharp ridge at the top and a precipitous off-camber descent. Pressing a pair of buttons on the dash allows you to lock the centre and rear differentials without leaving the sumptuous cabin, and the big SUV makes easy work of both the ascent (it can scale slopes of up to 37 degrees) and the descent, where the low-range gearing negates the need to touch the brakes. Instead, you creep down in first gear, letting the engine do the braking.

Next up is the rock crawl, which actually consists of broken up concrete and is akin to driving across the ruins of a demolished building. Then there’s a long V-shaped ditch that has the G550 driving along at a severe sideways angle. The big SUV may be tall, but it stays securely planted.

After a few more obstacles, it’s finally time to lock the front differential (not something you do until absolutely necessary because it makes the vehicle push a wide circle around corners) and tackle the most intimidating obstacles: a bluff, mud-slicked embankment that would certainly stop most any other vehicle, and then the “elephant tracks”. These consist of a series of offset moguls, each about a metre tall and impossible to traverse with all the wheels on the ground, even with the G550’s generous suspension travel. It’s here that things get a little out of hand.

At low speeds, the G550 handles the elephant tracks with surprising aplomb, clambering up the first of the moguls, teetering from one set of diagonally opposed wheels to the other, and then gently riding down to the next valley. But one overenthusiastic journalist, having watched those ahead, decides this is too tame and comes barreling through the moguls at an astounding clip. The instructors bark over the radio to slow down, but their words go unheeded and the G550 bounds up the first mogul, bouncing into the air and crashing down into the first valley, rearing up sideways and getting the front end almost entirely airborne over the next mogul before smacking back down again. The driver and passenger pitch about violently inside, but the big SUV shrugs it all off without a scratch. It’s all just a day’s work for the G-Class.

On the outside, the new G-Class gets LED running lights, streamlined new exterior mirrors, and slightly revised bumpers and grille, but otherwise retains its familiar stout, boxy bodywork. Inside, however, Mercedes-Benz has really pulled out all the stops and finally given the 2013 G-Class a cabin worthy of a modern luxury vehicle. There’s a sleek modern dash and a sophisticated four-spoke steering wheel, both trimmed with rich wood grain and brushed aluminum accents. An oversized centre console houses most of the necessary controls and buttons, and all the expected technological goodies are accounted for: dual-zone automatic air conditioning, voice-controlled navigation system, 450-watt harman/kardon audio system with satellite radio, Bluetooth phone connectivity, 10 gigabytes of onboard music storage—basically, everything you could possibly want and more.

You sit high in the G-Class, with a commanding view, and the richly upholstered heated leather front seats are almost infinitely adjustable (you can even change how tightly the bolsters grip you), so getting comfortable is a cinch. The split-folding rear bench has plenty of room for three across, and commodious cargo space.

Driving the G550 on the road is a unique experience, given its combination of massive power and serious off-road underpinnings. The 5.5-litre V8 generates 382 horsepower and a whopping 391 lb-ft of torque and has a pleasing guttural rumble like a 1970s muscle car. It’ll accelerate like a muscle car too, if you don’t mind paying the fuel bills (0–100 km/h takes about 6.1 seconds, rated consumption is 18.1 / 13.6 L / 100km city/highway, and there’s no diesel version available in North America, though you can get a more powerful 536-horsepower G63 AMG version). The suspension smoothes out rough pavement, though big bumps can get it pitching somewhat. Handling is as expected for an off-road-ready SUV, with rather truck-like steering and a fair amount of body roll in corners, but thanks to assistive technologies including ABS brakes, skid control, and stability control, the G550 is predictable near the limits and easy to drive.

Ultimately the G550 goes wherever you point it, gets you there in comfort, and looks ruggedly good doing it, and that makes it just the thing for cruising Robson Street—even after the Big One hits and collapsed building facades fill the roadway with rubble.