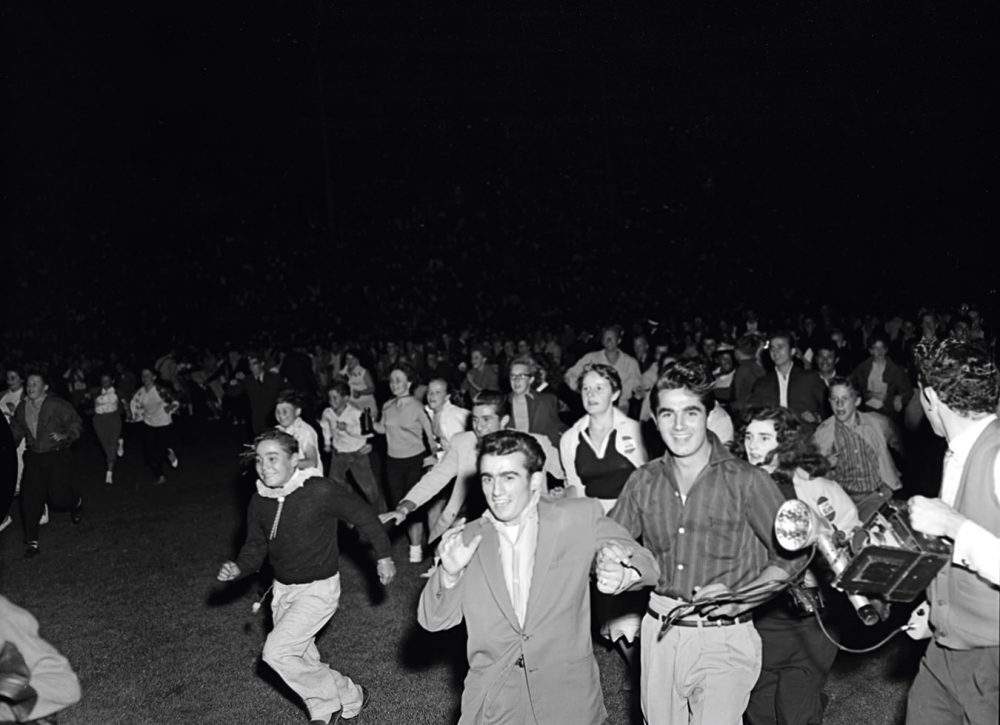 The first time I noticed the Jimi Hendrix Shrine, my reaction was probably similar to many others. Aw, that’s cute, I thought. Most fans get silly about Elvis.

First impressions of the little shack on Union Street just east of Main are understandably modest. Second impressions too. Open only from June to mid-September, the red wooden structure is not much bigger than a garden shed. It’s fun to imagine a Pacific Northwest tourist bound for Seattle’s $250-million Experience Music Project mis-programming the GPS and ending up here instead. Seattle has a better claim on the legendary guitarist and, thanks to billionaire music fan Paul Allen, a massive Frank Gehry building to celebrate him. But Vancouver’s modest tribute to Jimi actually does have a legitimate hook. And simply by standing there it can represent for a host of other Vancouver sites now long vanished. The Hendrix Shrine is one of the few survivors on the ghost trail that is Vancouver’s rock and roll history.

There are monuments to rock and roll in Vancouver. But a circuit of our musical landmarks would produce fewer good photos than a bus tour of last year’s lightning strikes. Too many are just addresses now, or empty patches of sidewalk. On Hornby near Georgia there’s just a plaque in the cement to mark the location of the Cave Supper Club, where a lineup of crooners and jazz artists began to give way to rockers and R&B stars in the late ‘60s and ‘70s.

There’s a playing field at the site of grand old Empire Stadium, venue for the final international concert of Elvis Presley on August 31, 1957—all 22 minutes of it before a rush of crazed fans caused the King to flee his subjects in terror. Three years earlier, Roger Bannister had become the first man to run the mile in under four minutes, but if someone had put a stopwatch on Elvis that day he might have added another record to his growing stash of the gold variety.

One piece of sacred Elvis ground remains: Elvis’s temporary Vancouver digs, the former room 1226 of the Hotel Georgia. It was stripped down to the floorboards by fans after CKWX DJ Red Robinson made the mistake of identifying it on air. According to Rosewood Hotel Georgia manager Steve Halliday, Elvis’s old room still exists as the Rosewood Suite, now with an extra bedroom and deck. Minus the ashtrays, though.

Seven years later it was the Beatles’ turn to crank out less than half an hour’s worth of music to a hysterical Empire Stadium mob. That August 22, 1964, the Fab Four concert had something else in common with the Elvis show—poor, suffering Robinson. Red emceed the Elvis show and became a victim of Presley’s sense of humour when the former truck driver borrowed a policeman’s handcuffs and chained him to a shower rod. More famously, John Lennon told Robinson to “Get the fuck off the stage” when Robinson tried to calm the crowd mid-show. (After realizing that Robinson was acting at the behest of Beatles manager Brian Epstein, Lennon reportedly apologized and said, “Carry on, mate.”) The Beatles would have stayed at the Hotel Georgia too, but after hearing it was ringed with frenzied fans they opted to head straight for the airport. Eventually, touring rock and rollers began spending more time in the city, not to gig but to record. Last spring, TV and newspapers carried the news that Mushroom Studios was no more. The studio at 1234 West 6th Avenue saw the recording of Heart’s Dreamboat Annie LP, plenty of work from Chilliwack, Terry Jacks’s smash “Seasons in the Sun”, and Skinny Puppy’s Too Dark Park, and it reportedly hosted Robert Plant of Led Zeppelin. Mushroom was also the source of “Apache” by the Incredible Bongo Band, a 1973 release that would become so influential in hip hop that it inspired an entire documentary, titled Sample This.

Not that these places were ever tourist draws anyway. That’s typical of Vancouver’s rock and roll history—it’s not obvious to the naked eye. A couple of naked exceptions: the Marble Arch and No. 5 Orange. Mötley Crüe immortalized the Marble Arch in the hit song “Girls, Girls, Girls”. Although no longer a peeler bar, the Arch still stands. Nowadays it forms part of another tour, after topping the City of Vancouver’s list of the five worst rental properties in town.

As for No. 5, its most famous alumnus was not a customer. Courtney Love was among the women who disrobed for local boozehounds before achieving both fame and infamy as leader of Hole and, depending on who you to talk to, either muse or siren to Kurt Cobain.

They’ve remade the YMCA on Burrard Street, keeping the old brick facade as a front to a fancy new tower. That old brick building may represent another little part of pop music history—Victor Willis, lead singer of the Village People, claims he wrote the disco smash “YMCA” while in Vancouver.

Modest though it is, at least the Hendrix Shrine still stands, a surviving remnant of Hogan’s Alley, the neighbourhood destroyed by the misguided plan to punch a freeway out of the downtown core. The little shack is believed to be the former kitchen of Vie’s Chicken and Steak House, where Jimi’s grandmother Nora Hendrix worked as a cook. Vie’s was a speakeasy that eventually went legit, serving up chicken to a loyal clientele that included a lot of travelling musicians. Young Jimi spent some summers here with his grandmother, reportedly busking on Granville Street sometimes. Recent news reports have suggested that the Hendrix Shrine too will fall victim to redevelopment. Owner Vincent Fodera thinks not. “I also own the Creekside Student Residence right beside it,” he says. “Thanks to [the late city councillor] Jim Green, it’s against the law to knock down an SRO hotel.”

Besides, Fodera has set a rather daunting condition for any potential developer. “I’d want to have a 30-foot statue of Jimi on the site,” Fodera says, “like the statue of Jesus in Rio.”

Now that might deflect a few tourists from Seattle.