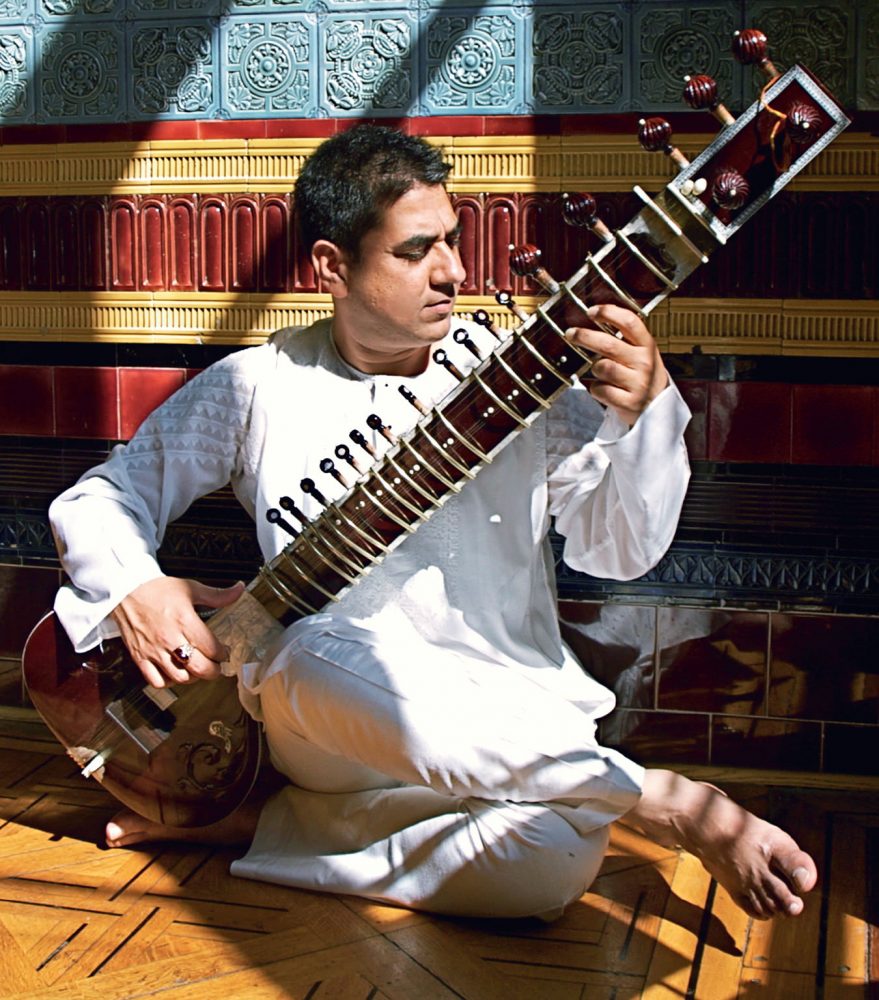 As a young boy growing up in Karachi, Pakistan, Mohamed Assani fell in love with music on a cricket field. “Every year we would have this festive religious celebration called Eid, and there was a live band right in the middle of everything,” remembers Assani, now in his 40s. “The first time I heard the guitar play, somehow I felt it in my heart. It really inspired me, and that is where my love of music began.” That spark of inspiration grew into a lifelong career in music that has taken him across continents and into the depths of his own soul.

When Assani turned 18, a friend told him about schools that taught music and nothing else. “I was so excited,” says Assani. “When I applied to college I had no idea who Mozart or Beethoven even were.” Yet his combination of natural talent and a deep desire to learn music earned him a place in the classical music program at Dartington College of Arts in Devon, England. Unbeknownst to Assani, the school had a strong world music program with a focus on Indian instruments. It was here that Assani first saw a sitar played live by a guest teacher. “Sometimes when he practised, I would sit with him for hours and just listen without moving.” Assani was committed to classical music and completed his degree, but the sitar left an imprint on his heart.

After graduating from a teaching program, Assani spent six years teaching classical music and world music in some of London’s most prestigious schools, including the Royal Academy of Music and the BRIT School for Performing Arts & Technology, but he wasn’t happy. “The more I taught, the more it became apparent to me that I was never going to do what I really wanted to do—be a performer,” he says. Assani left his job and shifted his focus back to performing. He signed up for jazz piano lessons to refresh his skills, and on the first day of class, as he climbed the stairs, he bumped into a man who looked familiar. “Six months before, I had dreamt of a man in a white turban who was teaching me the sitar, and it felt so real,” Assani recalls. “I knew when I saw this man on the stairs, he was my teacher.” Hungry to learn, Assani made rapid progress, impressing his new teacher. Within a few months, he made the sitar his main priority, and he has never looked back.

Today, Assani is a celebrated sitar player, known for his creative musical collaborations with artists of all genres. For the past 12 years, he has performed across the U.K. and in Canada with orchestras, string quartets, hip hop artists, DJs, world music ensembles, jazz artists, and Indian and Western classical artists—and, of course, solo. In November 2010, Assani moved from England to Canada with his wife and young daughter to make Vancouver his home. He now teaches at the Vancouver Symphony Orchestra School of Music and privately from his home. He performs often and continues to grow as an artist.

“Musicians have a very fragile ego because your art is on display, and your art is who you are,” says Assani. “If you have self-doubt, then putting yourself out there is hard. Every performance is its own challenge, and I don’t take it for granted that I will sound great all the time. At no point do you become a master without continuous practice. I have to practise to get there and stay there. I have to practise every day if I feel like it or not. As a musician, it is my job.”

In this practice, Assani finds his deepest peace. “For me, the closest thing to meditation is playing the sitar. Its melancholic sound resonates with my soul and grips my heart. It can spell out every kind of human emotion, even the ones I don’t have words for.” He pauses for a moment and then continues. “The sitar is my friend and also my teacher. It has taught me discipline and patience, how to think and approach things differently, how to develop a relationship with the sitar but also with myself.” His greatest joy as a performer is those moments of live co-creation with other musicians and deep connection with his audience.

“This life of a musician is not what I imagined it to be, but it’s still very cool,” says Assani with a grin, thinking back to his young dream. “I would still make the same choice again—always and forever the same choice. I think I made the right choice for me.”